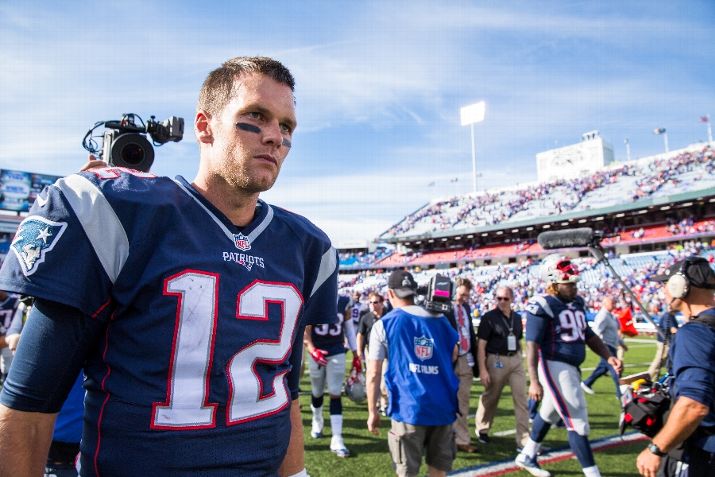 Tom Brady isn’t messing around. We have the NFL to thank for that. (Photo by Brett Carlsen/Getty Images)

TEN
Eight years ago the NFL went after the New England Patriots for what some believed was a benign cheating scandal. Whether you agree or disagree with the NFL’s punishment of the Patriots, we can all agree it played some role in the most dominant season in NFL history. At the helm of that dominance was 30 year old Tom Brady. Brady torched the league for nearly 5,000 yards and threw 50 touchdowns to only 8 interceptions. His completion percentage was a cool 69%. It’s 2015. Brady is now 38 and the Patriots are once again playing with an aggressive NFL investigation in their rearview mirror. To no one’s surprise, Brady is on a tear. His numbers through two games; 754 yards, 7 touchdowns, 0 interceptions, and completing 69% of his passes. Look at those numbers when extrapolated to a 16 game season; 6,000 yards and 56 touchdowns. Of course Brady won’t finish the year with 6,000 passing yards. I doubt he even gets to 40 touchdowns, but that’s how good Brady’s been through the first two weeks. Did you see what he did to what many believed to be the NFL’s top defense on Sunday? The Bills were at Brady’s mercy all afternoon. They couldn’t stop him. They couldn’t rattle him. They could hardly touch him.

NINE
Speaking of great quarterbacks, why do we continually take them for granted? Tom Brady and Aaron Rodgers have been exceptional this year. In fact, they’ve been on or near that level for the last decade. Yet we love to devote our attention to unproven newcomers. Three years ago Cam Newton, Colin Kaepernick and Robert Griffin III were the darlings of the NFL media and fans alike. Two years ago it was Russell Wilson and Andrew Luck. This year Teddy Bridgewater and the prize rookies in Tennessee and Tampa received the love. We always crave what we don’t have. We love hope more than reality. Here’s the reality: None of the eight quarterbacks I just mentioned will be anywhere near as great as Brady or Rodgers. They’re the best at the position right now and definitely two of the best to ever play. We take for granted their greatness and pretend there isn’t a gigantic chasm between them and the next tier of QBs. Neither Brady nor Rodgers boasts an elite defense. Their receivers are all unknowns or undersized. Only Brady has an elite target in Rob Gronkowski. And still they win, often in dominant fashion, too. So let’s stop pretending Luck and Wilson and Newton are worth the attention they receive. When it comes to great quarterbacks, Brady and Rodgers is where the conversation starts and stops.

EIGHT
Let’s stick with the quarterback position and our love with hope of the unknown. Bears fans have been clamoring for the end of the Jay Cutler era in Chicago and reasonably so. Cutler is as bipolar a quarterback as there is in the league. Regardless, Cutler is still talented and capable of driving a good offense. When Cutler left Sunday’s game with an injury, Bears fans were intrigued and excited about Cutlers absence. Then they watched two hours of Jimmy Clausen. Clausen finished with less than 125 yards over the final 33 minutes. He threw one interception, averaged 5.3 yards per attempt and finished the game with a QBR of 3.2. The Bears kicked three field goals under Clausen. However, the Cardinals gifted two of them. If you don’t believe me, the Clausen-led offense ran 8 plays for a total of 7 yards on the gifted field goal “drives.” While Cutler was on the field, the Bears scored 14 points and responded to each Cardinal score until Cutler’s interception. Cutler left the game with 120 yards on 8/9, a touchdown and an average attempt of 13.3 yards. His QBR was 96.9. Chicago fans have long been tired of Cutler, but the reality of life without Cutler can be a cold slap to the face. Detroit fans may experience the same wake-up call in Week 3 if Matthew Stafford is unable to go.

SEVEN
The Colts are the Eagles. The Eagles are the Colts.
Overhyped offense ready to take the league by storm?

A shoo-in for division title?

(Did you know it was “shoo” and not shoe? That’s crazy. I never knew that.)
Picked by many to reach their conference title game?

Found their footing in 2nd half only to have comeback fall short?

Fool everyone into thinking they’d be fine after promising 2nd half performance?

Come out at home in Week 2 only to be shutout in the 1st half in front of national audience?

Show signs of life early in 2nd half but turnovers douse any comeback?

Lose in embarrassing fashion and fall to the basement of the two worst divisions in football?

SIX
Things we thought we knew from week 1 but then turned out not to be true, so things we didn’t realize about Week 1 may now be true….. (You got that, right?)

FIVE
Again, there’s no point in doing Power Rankings until October. In lieu of Power Rankings, let’s rank my worst picks of Week 2.

2. Believing the Rams wouldn’t be the Rams. “I think St. Louis finally makes the leap this year.” And by “this year” I meant, “when Jeff Fisher is replaced.” Sorry for any confusion.

3. Believing the Bears were competent. “Fox’s teams, while never particularly great, are almost always competitive.” I just laughed at that sentenced. I don’t even like John Fox teams. Though, in my defense, the Bears did lose their starting QB before halftime.

4. Take your pick between the Colts, Eagles or Ravens. All got smoked. And I wasn’t smoking anything when I made the picks.

FOUR
Who’s winning the NFC East? Right now, you could make the argument the Redskins have been the most consistent team. Washington held its own against Miami until a punt return decided the outcome. A week later the Redskins dominated the Rams from start to finish. For months all we heard from Washington was about a QB catastrophe. Who knew they had such a competent defense?

Despite an 0-2 start, one could argue the Giants have been the most consistent team. They’ve moved the football, put up some points, limited the potency of opposing offenses, shown an inability to run the football and blew 4th quarter leads en route to two devastating losses. They’ve been consistent all the way around, even at the bad things.

The Cowboys are leading the division at 2-0, but they’ll be lucky to win two more games over the next 8 weeks without Tony Romo and Dez Bryant. I’m not eliminating Dallas just yet, but they’re not a threat until we see what their record is when key players return.

That leaves the Eagles. If Chip Kelly can turn his team around and find some offensive rhythm, the division is certainly there for the taking. However, turning around the offense at this point is a HUGE “if” considering how bad it looks and the Jets waiting around the corner. Also, the Eagle defense can’t reach it’s full potential until Nnamdi Asomugha Byron Maxwell makes an effort to earn his 60 million dollar contract. Just an effort, that’s all we ask. In conclusion, here’s a photo to sum up the NFC East.

THREE
Anyone else notice the Eagles and Cowboys have flipped roles? The Eagles used to be the gritty underdog stealing games from the more heralded, soft-as-tissue Cowboys. In the Chip Kelly era the Eagles are the more hyped, skill-over-grit team that consistently gets abused at home. Kelly’s Eagles are now 0-3 in Philadelphia against the Cowboys. In two of those games they’ve combined for 13 points.

THREE A
Raise your hand if you had the Eagles, Colts, Ravens and Seahawks a combined 0-8 after two weeks? Fittingly, three of these teams were on Grantland’s contenders list. Are their respective seasons finished? Of course not, but no one expected a winless start like this.

TWO
Finding the ball is half the battle.