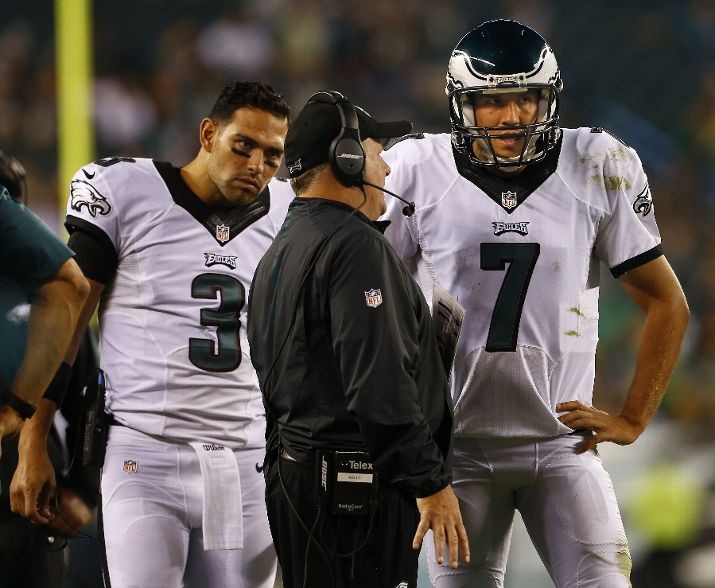 In his arrogance, Chip Kelly has continually discarded talent. Those chickens have come home to roost. (Photo by Rich Schultz /Getty Images)

I’m not shocked by Sunday’s outcome in Philadelphia. I’m not even mad. I’m really not. I’m not here to say I told you so, either. If you read this blog you know I’m not a Chip Kelly fan. I don’t like arrogance. When Chip double-downed on that arrogance this offseason there was a decent chance of it blowing up in his face. Is it over for Kelly and the 2015 Eagles. No. Not even close. We’re two games into a 16 game season. The only 2-0 team in the division is already without their top receiver and just lost their quarterback for two months. They have little in regards to a running game. The NFC East is not running away from the 0-2 Eagles.

On the other hand, there’s little proof of the Eagles offense running anywhere but backward. This may come as a surprise to the blind homer Eagle fans hailing Chip as a genius this offseason, but you can’t continually jettison your best players and expect to hang 30 points on your opponent.

As I mentioned last week, Kelly felt the need to rid himself of his top receiver in 2013 and then opted not to bring back his top receiver of 2014. Not paying Jeremy Maclin was a reasonable decision. It’s hard to make a case against Kelly given what Maclin received from Kansas City. But losing DeSean Jackson – one of the premiere stretch receivers in the NFL – for nothing was pure ego. Great coaches harness egos and use them to their advantage. Kelly is threatened by ego despite having the biggest ego of anyone ever in the history of humans. Ask any defensive coordinator what scared them most about the Eagles offense in 2013. It wasn’t Chip Kelly’s mind. It wasn’t the tempo. It wasn’t LeSean McCoy. It was DeSean Jackson. Sadly, choirboy Kelly didn’t like Jackson’s attitude so he cut him. Let me say that again; CUT HIM. Not a dime in return. The Eagles top receiver right now is a 2nd year slot receiver. There’s no talent on the outside. No speed to stretch a defense. It’s painfully obvious, too.

Fast-forward a year to the next offseason. Kelly gutted the roster of as many Andy Reid players as possible. Defensive stalwart Trent Cole was shown the door. Proven offensive guards (including a Pro-Bowler), were released. Kelly even traded the NFL’s leading rusher in 2013 for a linebacker coming off knee surgery. Did I mention LeSean McCoy, in what many called a “down year” for the star back , finished 3rd in the NFL in rushing in 2014? That’s right, Kelly traded a back built for the stretch offense for “football reasons.” Yeh, ooookkkkaaayyy.

How are those replacement guards working out for the Eagles? Kelly reeled in the NFL’s top back from 2014 and in two games he’s rushed for 11 yards on 21 attempts. You think DeMarco Murray just all-of-sudden forgot how to run the football? Evan Mathis and Todd Herremans are howling tonight, that’s for sure. If you don’t recognize a trend of reckless arrogance, just wait because there’s more.

Despite an awful record against playoff teams (3-8), and a less-than-ideal draft resume, Kelly thought it appropriate to demand full personnel control. Yes the same guy who drafted Marcus Smith in the 1st round thought he should have total roster power. While it’s not Kelly’s fault owner Jeffrey Lurie was dumb enough to grant that power, it’s amazing Kelly made such a bold play for it given what little he’s achieved.

Is the book closed on Kelly? Of course not. Andy Reid’s 2003 team was outscored 48-10 en route to an ugly 0-2 start and still found its way to the NFC Championship game. Given the weakness of the division, it’d be foolish to believe Kelly and the Eagles are done.

However, instead of fielding the most talented team possible and (likely) breezing through an easy division, Kelly’s arrogance produced a mess of an offense lacking everything from timing to blocking and yes, confidence in the quarterback. Even Kelly’s offensive wizardry can’t tune this bunch overnight.

Kelly overvalued his own genius and kicked talent to the curb as a result. In professional sports, talent is bigger than anything. It’s bigger than scheme, bigger than depth, bigger than coaching. All those things are empty when lacking talent. The Eagles offense lacks talent and Chip Kelly is now face to face with the fruits of his reckless arrogance.