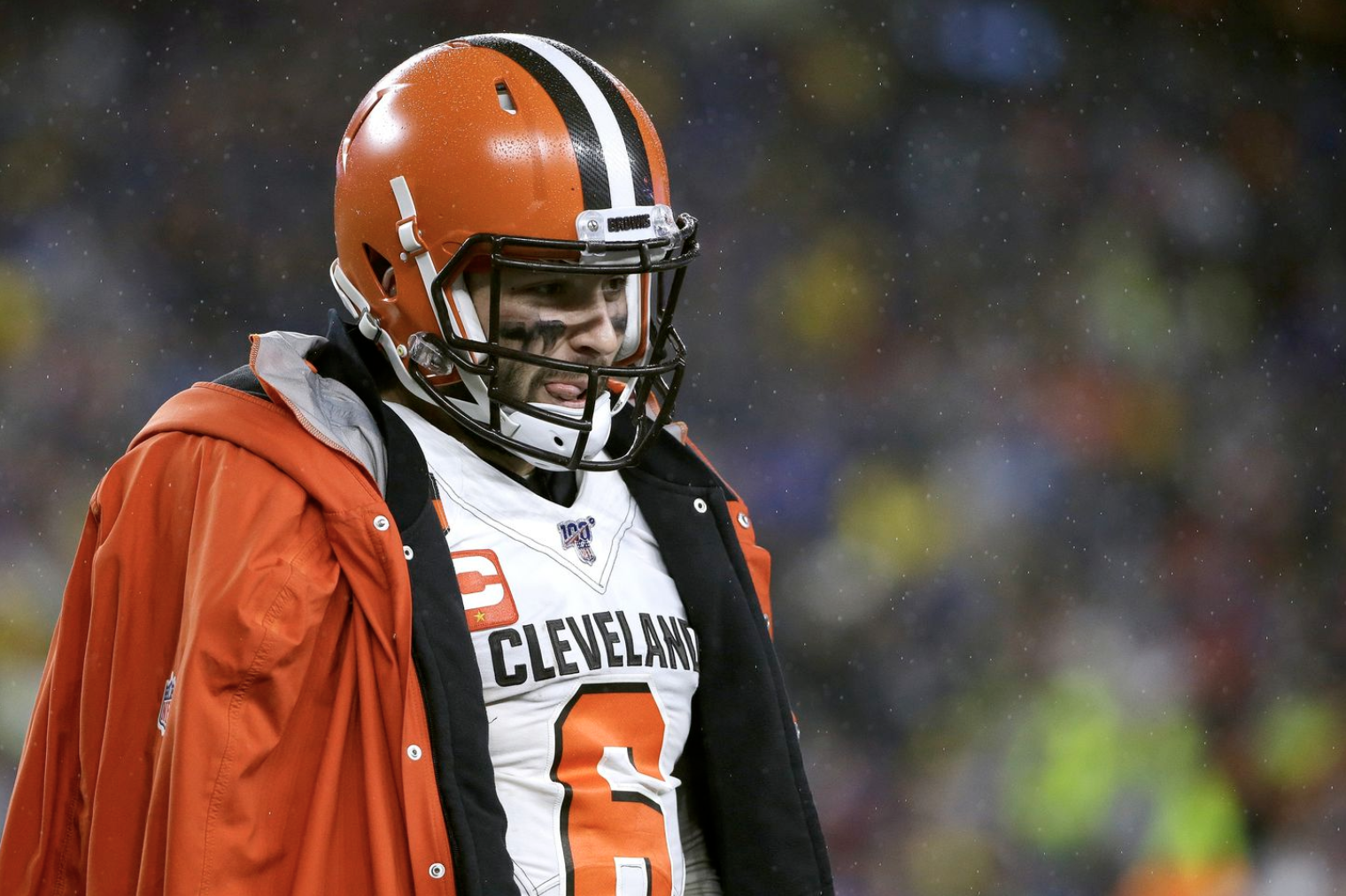 It’s been a tough sophomore season for Baker Mayfield and Cleveland. Though he stinks now, Mayfield’s not done, and neither are the Browns. (Photo by Steven Senne/AP)

49ers 28 at Cardinals 25
Despite a perfect record, many have written off the 49ers as legitimate contenders in the NFC, mainly because they don’t trust Jimmy Garoppolo. Thursday night was Garoppolo’s best game of the season. It was his first outing with over 300 yards and only his second game without an interception. One game doesn’t make a season. However, if the 49ers can get that performance… or close to it… out of Garoppolo moving forward, even the harshest critic would find it hard to discount San Francisco’s candidacy for NFC champion.

Falcons
Losing six straight and surviving the bye week can only mean two things. 1. Dan Quinn will be Atlanta’s coach for the rest of the season and probably next season, too. Or 2. Falcons owner, Arthur Blank is too cheap to pay Quinn and another coach to replace him. I’d lean toward option one. Look what Blank said when he signed Quinn to an extension through the 2022 season… “I believe continuity in leadership is vital to achieving the highest levels of success in any organization and, with these extensions, we ensure these two leaders will be at the helm of our franchise for years to come.” Sure, it could be lip service, but it sounds like Blank values continuity and is willing to swallow some tough seasons to keep the nucleus together. I actually agree with this approach, just not sure Quinn is a good coach.

Bengals
Andy Dalton was dealt a losing hand back in August and he did as much with it as he possibly could. His run in Cincinnati is approaching its end but Dalton will land on his feet somewhere. I think he could thrive in the right situation. There are at least six teams that will be looking for a starting quarterback next season. Not all of them will find one in the draft.

Rams
The Rams season will be determined over a three-week stretch in December where they host Seattle before traveling to Dallas and San Francisco. I can’t figure out if this team is good or not.

Saints
It pains me to say this. No really, it actually hurts to say this, but Sean Payton doesn’t get enough credit as one of the best coaches in the NFL. In fact, it’s him or Andy Reid battling it out for 2nd behind Bill Belichick. Payton has done a masterful job of building that team through the draft (’16 and ’17 especially) and adjusting to injuries and aging as well as anyone. But most of all, he’s gotten this team to rally from two of the most agonizing playoff defeats in NFL history. Look at Atlanta, they never recovered from their own playoff catastrophe and the Saints have bounced back twice now.

Texans at Jaguars
Jacksonville is an intriguing playoff contender. They’re the 5th best rushing offense in the NFL. Their defense, while not great, ranks among the top half in points allowed, DVOA, and yards allowed. At 4-4 the Jaguars show playoff potential. However, a closer look at their schedule spells doom. Jacksonville’s four wins are over teams with a combined 7-24 record. Meanwhile, they’ve lost every game they’ve played against a winning team thus far. Houston is running low on bodies, though, and they’ve relied heavily on Deshaun Watson rallies in three of their five victories. Does that magic travel across oceans? I’m just going with my gut here. Jacksonville’s season is on the line and I don’t trust Bill O’Brien. JAGUARS If I were Charles Barkley; Jaguars +2

Redskins at Bills
Buffalo is the worst team in the league with a winning record and it’s not really close. I’d rather not see them in the playoffs, but looking through their remaining schedule it’s hard to see anything worse than a 9-7 finish. In the AFC, that may be enough to grab a playoff berth. We still have half a season to go, and perhaps even a rally from Cleveland or the Chargers or someone else, but for now go ahead and pencil in the Bills for that Saturday afternoon game on Wildcard Weekend. BILLS If I were Charles Barkley; Bills -10

Vikings at Chiefs
I’m guessing Patrick Mahomes won’t be available Sunday. If that’s the case, the Chiefs are in trouble. This is already a bad matchup for the them. Kansas City owns the league’s 3rd worst run defense while Minnesota boasts the NFL’s 3rd best rushing attack. Let’s just go ahead and say it, Andy Reid misses Kareem Hunt. LeSean McCoy has been adequate but he’s not the finisher Hunt was, especially in short yardage situations. To make matters worse, Damien Williams has struggled all year in the running game. Reid is trying to piece together production from his backfield of castoffs instead of having it all in Hunt. With Mahomes out, Hunt’s absence becomes more obvious. Reid is always at his best with a versatile back. In Philadelphia he had Duce Staley, then Brian Westbrook and then a younger McCoy. In Kansas City he had Jamaal Charles and then Hunt. VIKINGS If I were Charles Barkley; No line yet

Jets at Dolphins
As I’ve said previously, I really, really like Jamal Adams. This past week was a bad look for him, though. Comparing yourself to Tom Brady and Aaron Donald was, uh, misguided? The truth about football is this, when you’re 1-6, everyone is available. JETS If I were Charles Barkley; Jets -3

Bears at Eagles
The Bills and Bears both have good defenses with very limited offenses and even further limited quarterbacks at the helm. That’s a perfect combination for this version of the Eagles. Carson Wentz and the offense are good enough to produce against elite defenses as long as their own defense doesn’t put them in a double-digit hole before halftime. The Bears, like the Bills, can’t light up the scoreboard. They’re lucky if they find the end zone more than once. I’m not buying the “Eagles are back” narrative just yet. However, their remaining schedule lacks the explosive offenses that tormented them in September and October, so it’s easy to see a playoff run on the horizon. Of course, once the playoffs arrive the nightmares will undoubtedly return. EAGLES If I were Charles Barkley; Eagles -4.5

Colts at Steelers
The NFL has often taught us that really good teams win by large margins and teams that win close games week in and week out are often more lucky than good. There are 14 teams with a better point differential than the Colts right now. Their current strength of schedule is 19th. The Steelers are undervalued. They’re still working in a backup quarterback and their four losses were to teams with a combined record of 27-4. Furthermore, the last three of those loses were each by four points or less. STEELERS If I were Charles Barkley; Steelers +1

Titans at Panthers
Caroline got embarrassed in San Francisco last week. That was the worst defensive performance I’ve seen all season and I’m an Eagles fan. The Panthers surrendered six rushing plays of 15 yards or more. They put up no resistance. I’m not ready to burry the Panthers after one lousy performance, but whatever they did over their bye week should never, ever be repeated. PANTHERS If I were Charles Barkley; Panthers -3.5

Lions at Raiders
Oakland is perhaps our best hope at keeping Buffalo out of the postseason. They haven’t played at home in Oakland since Week 2. Outside of Pittsburgh, there aren’t four more respectable losses in the league (KC, @MINN, @GB, @HOU). Of their remaining eight games, only Kansas City is currently a playoff team. A 9-7 record or maybe even 10-6 is attainable for Jon Gruden’s squad. My main complaint with the Raiders is not leaning on Josh Jacobs more. Despite playing with a lead for nearly the entire 2nd half last week, Jacobs only had 8 carries (one of which was called back due to a penalty.) RAIDERS If I were Charles Barkley; Raiders -2.5

Buccaneers at Seahawks
The Seahawks have also been thrown around as a sneaky “worse then their record” candidate. I’m not completely sold yet, but I’m paying attention. Seattle’s win margin over teams not named the Cardinals or Falcons is 8 points. Four victories by a total of 8 points is worth noting, especially when three of those teams have losing records. Add in Atlanta and Arizona and five of Seattle’s six wins are against losing teams. I don’t think Seattle is bad, but their defense is weak, their strength of schedule is soft and Pete Carroll has some Freddie Kitchens in him. This is kind of a must win for Seattle. Their schedule rolls up hill for the rest of the season with a Week 16 visit from the spunky Cardinals as the only exception. SEAHAWKS If I were Charles Barkley; Buccaneers +5

Browns at Broncos
I haven’t given up on the Browns just yet. Despite the fumbles, stupid penalties and head-scratching interceptions, Cleveland was in that game late in New England. The return of cornerbacks Greedy Williams and Denzel Ward gave a much-needed boost to the Browns defense. That should relieve some of the pressure on the offense. Also, why do we give up on Quarterbacks so easily these days? No, Baker Mayfield isn’t Patrick Mahomes or Deshaun Watson. He’s not even an above average starter right now. He’s also only 24 and in his 2nd season. And his head coach is a buffoon. If Mayfield’s touchdown to interception ratio is still in 1/2 in 2021 then we can all press the panic button together. Until then, let’s let young players grow before we take them out back behind the shed. BROWNS If I were Charles Barkley; Browns -4.5

Packers at Chargers
If we’re throwing together a “season from hell” power rankings, the Chargers are absolutely in the top 5. The Melvin Gordon hold out, injuries to Derwin James, Michael Badgley, Mike Pouncey, Russell Okung and Melvin Ingram, and just plain bad luck have taxed the Chargers this season. At 3-5 they’re still in the AFC mix, but their season is pretty much on the line Sunday with the Raiders and Chiefs on deck. They need to pull 2-1 out of a hat over that stretch. I’m going to be wrong, but my gut says the Chargers keep their season alive for at least another week. CHARGERS If I were Charles Barkley; Chargers +3.5

Patriots at Ravens
I’m the only one stupid enough to question this, but last week against the Patriots, Cleveland had a big play called back after an offensive pass interference call. If I recall correctly, they original called the penalty on #80 Jarvis Landry when in fact it was on #11 Antonio Callaway. Cleveland challenged the call and lost. Technically, the officials got the call wrong because it was Callaway, not Landry, who committed the foul. Therefore Cleveland’s challenge of the call was actually justified. Shouldn’t the Browns at least been permitted another challenge in that scenario or is this just a dumb loophole no one but me cares about? Okay, you’re right. This is moronic. By the way, this is New England’s most losable game to date and the start of the Patriots first real resistance of the season. I actually like Baltimore’s chances. On the other hand, I fully expect Bill Belichick to dare Lamar Jackson to beat him through the air. I’m not ready to trust Jackson with that responsibility yet. PATRIOTS If I were Charles Barkley; Patriots -3.5

Cowboys at Giants
As of right now, this is the only game of Dallas’ next 8 where you can with 100% certainty pick the Cowboys to emerge victorious. There’s no way they go into MetLife Stadium after a bye and lose to a lousy New York team. There’s no precedent for that and absolutely zero chance of it happening. Cowboys all day. Probably win by 50. COWBOYS If I were Charles Barkley; Cowboys -7.5