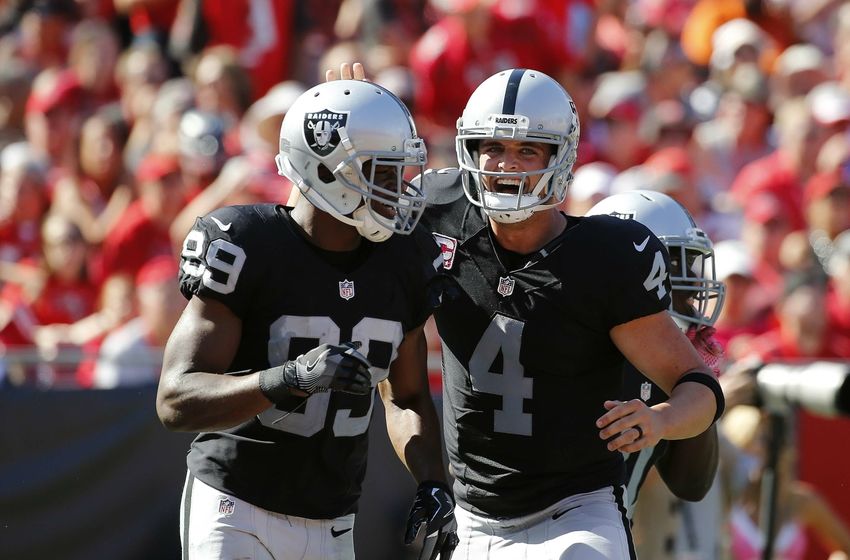 Win or lose, the Raiders have been the most exciting team in football this year. The NFL needs more of the Raiders. (Photo by Kim Klement-USA TODAY Sports)

Falcons 43 at Buccaneers 28
Like I said, Matt Ryan is pretty good. Defenses in the NFC South? Not so much.

Lions at Vikings
I hate to say I told you so, but I told you so. The Vikings are garbage. That offense isn’t good enough to get anything done against NFL defenses. I don’t even think it’s all Sam Bradford’s fault. That poor guy is on his rear end almost every time he drops back to pass. Without a running game to relieve the pressure, and with the offensive line in shambles, it’s hard to imagine a way this gets better for Minnesota unless Adrian Peterson returns. And soon. With that said, Minnesota will be tough to beat at home off two embarrassing outings. VIKINGS If I were Charles Barkley; Vikings -6

Jets at Dolphins
There’s been A LOT of talk about the sagging popularity of the NFL. I’m not here to preach about how great the NFL is or how much worse other sports are in comparison. However, there’s one thing that sets the NFL apart from the other major sports; the entirety of the regular season matters. Look at the standings. I’d only count four teams out of playoff contention; 49ers, Bears, Browns and Jaguars. That leaves 28 of 32 teams still legitimately fighting for a playoff spot. That’s incredible. The NBA is barely two weeks old and it’s pretty obvious the Cavaliers will win the East and there are only three teams capable of winning the West. I love the NBA, but the NFL offers unpredictability. Chaos is always fun. DOLPHINS If I were Charles Barkley; Jets +3.5

Eagles at Giants
The Eagles do plenty of things to make me believe they’re not a good team. On the other hand, they have the NFL’s 2nd best point differential. In two of their three loses they fumbled in the 4th quarter while clinging to a lead. In all three of their losses they’ve had an opportunity to take the lead or tie in the final minutes. For a team that is lacking talent and was supposed to finish with around 7 wins, the Eagles have proven themselves a formidable team. The NFL schedule has also done little to aid the Eagles. We’ve already discussed how bad a Week 4 bye is for a team with playoff aspirations. Without a break the rest of the season, the Eagles find themselves playing rested teams three weeks in a row. In week 8 the Eagles traveled to Dallas to play a Cowboys team coming off a bye. This week the Eagles travel to New York where the Giants are coming off a bye. Next week, the Eagles will host the Falcons, who will be ten days removed from their last game. I’m 95% convinced the Eagles are a good team with bad habits. EAGLES If I were Charles Barkley; Eagles +3

Jaguars at Chiefs
So a few weeks ago I declared Andy Reid the best coach in the NFL outside of Bill Belichick. This past week I realized I forgot Pete Carroll. I think I would rank Carroll ahead of Reid, but man is Reid a great coach. With Alex Smith as his quarterback, Reid and the Chiefs have won 15 of their last 17 regular season games. Find me another coach that does more with less than Reid. If you need to see for yourself, tune in Sunday to see Nick Foles under center. CHIEFS If I were Charles Barkley; Chiefs -7.5

Cowboys at Browns
Hot take alert! The Cowboys are a good team, but if they truly have Super Bowl aspirations, they’ll need Tony Romo under center. Don’t get me wrong, Dak Prescott has been great this season, but his accuracy has been anything but consistent. Sunday proved that yet again. Prescott threw a costly red zone interception early in the 1st quarter and could have thrown three more if not for a drop by Leodis McKelvin, a heady play from Terrance Williams, and poor ball awareness by Jalen Mills. It’s amazing how quickly Cowboys fans forget that Romo is 15-4 in his last 19 games under center. COWBOYS If I were Charles Barkley; Cowboys -8

Steelers at Ravens
The Ravens, losers of four straight, can sit atop the AFC North Sunday evening with a victory over the Steelers. Welcome to parity in the NFL. It’s been nearly four years since the Steelers last won in Baltimore. With Ben Roethlisberger back under center, the Ravens 6th ranked pass defense should have their work cut out for them. RAVENS If I were Charles Barkley; Ravens No Line Yet

Panthers at Rams
If you dig deep on Todd Gurley’s stats, you won’t like what you find. If you recall, Gurley was Zeke Elliott last year. He was supposed to be the game-changing back to take the league by storm. Take the league by storm he did. After a lousy first game, Gurley’s next four outings were most impressive; 88 attempts and 566 yards for a 6.4 average. His lowest output over that span was 128 yards. Now, fast-forward through Gurley’s next 15 games and things get hairy; 269 carries for 934 yards and a 3.5 average. After averaging 22 and 141 in those early outings his rookie year, Gurley has fallen off a cliff to 18 carriers and 62 yards per game. He’s had only one 100-yard game over that span. Yeesh. PANTHERS If I were Charles Barkley; Panthers -3

Saints at 49ers
Drew Brees and the Saints offense has been great of late. Against the vaunted Seattle defense, New Orleans registered 28 1st downs, went 9/15 on 3rd down conversions, and dominated time of possession 36 minutes to 24. Believe it or not, I think the Saints are a potential playoff team. That offense is really, really good, and New Orleans’ remaining schedule features only two teams with a winning record. SAINTS If I were Charles Barkley; Saints -4

Colts at Packers
Last week, Aaron Rodgers faced off with the NFL’s worst pass defense. This week, he’ll take on the 3rd worst unit in that regard. The Packers (and their fans) are in desperate need of a 45-17 blowout. I can’t think of a more suitable opponent than the Colts. Also, if you told both fan bases the loser of this game would fire their coach, both would pay money to lose, right? PACKERS If I were Charles Barkley; Packers -7.5

Titans at Chargers
Falling to 3-6 in the AFC West would all but end the Chargers’ hopes of rebounding from a 1-4 start. I want a relevant Philip Rivers in my life for a few more weeks. CHARGERS If I were Charles Barkley; Chargers -4

Broncos at Raiders
The Oakland Raiders are the life of the NFL party. They have tons of talent. They’re young. Whether they’re opting for two and the win instead of a tie or getting flagged an NFC record 23 times, Oakland keeps things interesting. I can’t tell if Jack Del Rio is a good coach or just lucky. Regardless, the NFL needs more of the Oakland Raiders. There are too many teams like the Broncos out there running a conservative offense and relying on a good defense. It’s a fine strategy, one that doesn’t usually bother me. However, when 80% of the league employs the same dink and doink, throw it four yards on 3rd and 9 offense it makes for lousy, unwatchable football. Sunday night is the start of a three game home stand for the Raiders, which may not be a good thing. Oakland is 1-2 at home and 5-0 on the road. I kind of think the Broncos will win but I’m taking the Raiders on principle. The Broncos offense is almost as unwatchable as the Eagles’ was last Sunday. RAIDERS If I were Charles Barkley; Raiders -1

Bills at Seahawks
The NFL has a serious problem. As everyone knows by now, TV ratings are sagging, the level of play is declining, and players are openly taking shots at the league’s commissioner. While players and the league commissioner don’t necessarily have the same interests, they generally try to function as partners. There is no partnership between Roger Goodell and NFL players. Goodell has evolved into a hypocritical tyrant. He’s let the media influence how the league is run, whether it be over-officiating, handing down unnecessarily harsh punishments for infractions outside of football, or sucking the fun out of the game. I applaud both Richard Sherman and Cam Newton for voicing their displeasure with the state of the league this past week. NFL owners have had no reason to fire Goodell. He’s made them more money than any commissioner before him. However, now that the NFL is suffering a recession of sorts, it’s time NFL players stand up to voice the damage Goodell has done to the league. Eventually, the decline in ratings will hit NFL owners where it hurts and thoughts of removing Goodell will inevitably sneak in. SEAHAWKS If I were Charles Barkley; Seahawks -7