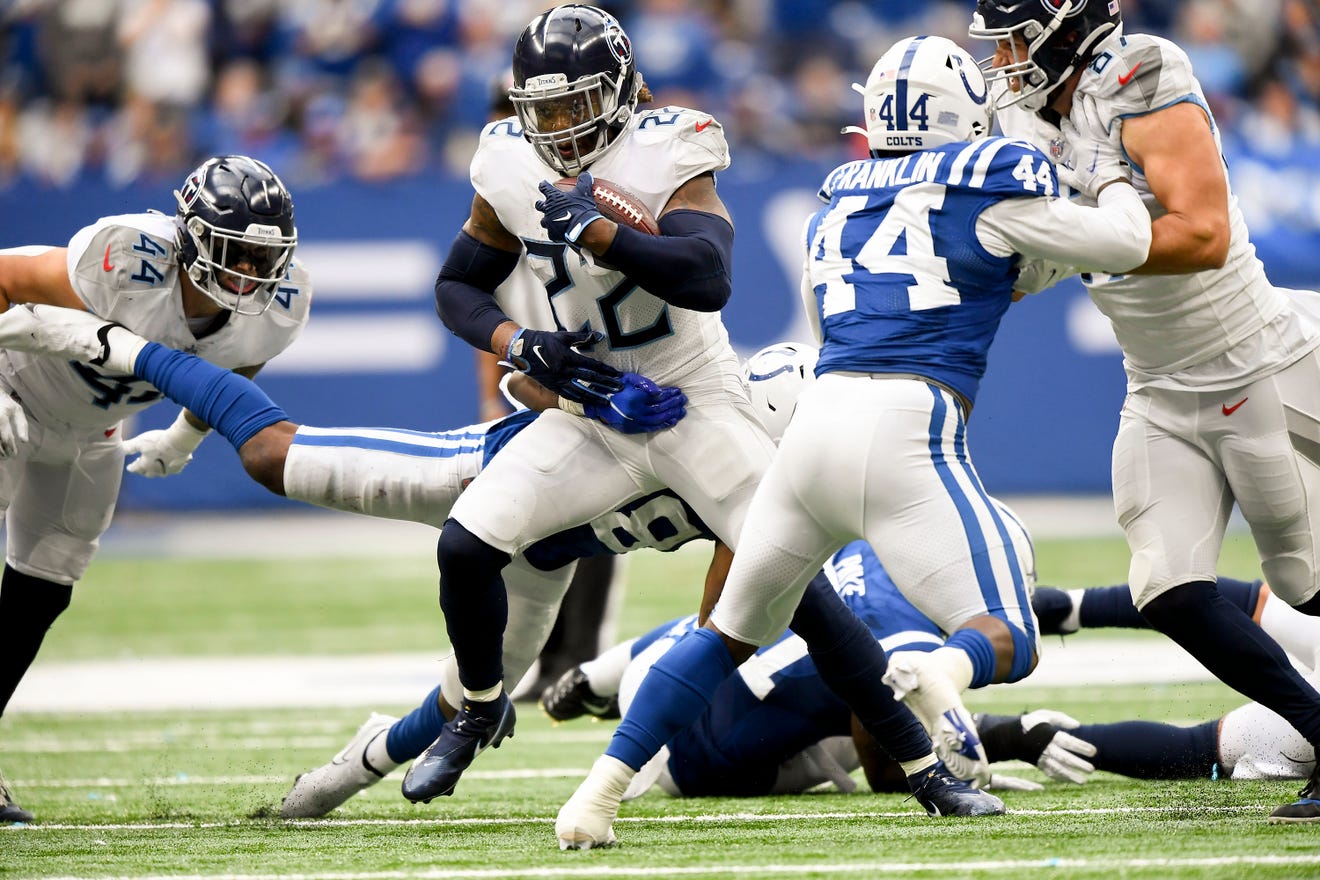 Without Derrick Henry the Titans now find themselves in a similar position to another AFC challenger (Photo by  George Walk IV/Tennessean.com)

As you can, it was a bloodbath last week. Thankfully, each week offers a shot at redemption… or further pain. It’s fun to be alive!

Jets 30 at Colts 45
Total speculation here, but I think Frank Reich keeping Carson Wentz in a game where the Colts at one time led 42-10 is his way of eliminating distractions. Essentially, Reich is saying, “The 1st round pick is gone. Wentz is our quarterback this year and for the future. Now let’s go make the playoffs.” I think it’s the right call, too. Fans and media get too caught up in things players simply do not care about. No one on that Colts roster gives a crap if the Colts give up a first or second round pick. They just want to win. Wentz gives them their best chance at that.

Browns at Bengals
The Baker Mayfield and Odell Beckham Jr. saga has finally come to a close in Cleveland. I think both have been underwhelming in their time together and deserve equal share of the blame. With that said, I expect Mayfield to have the better career going forward. His numbers have always been better without Beckham Jr. The absence of Beckham’s constant angst around the offense certainly can’t hurt either. As for Beckham Jr., he strikes me as someone who loves being famous more than he loves football. He hasn’t been football relevant in years yet he still dominates headlines. I’m guessing he’s out of the league within the next two years even though he still has the talent to be a contributor. BROWNS +2.5

Broncos at Cowboys
Outside of injury, it’s nearly impossible to construct a scenario where the Cowboys don’t win the NFC East and finish with at least 13 wins. Mike McCarthy will certainly cost them a game at some point but even that won’t threaten their postseason hopes. I liked the Von Miller trade for Denver. I wish the Eagles would’ve done something similar with Fletcher Cox. The Broncos need a quarterback. Draft assets improve their chances of finally finding one. COWBOYS -10

Texans at Dolphins
Let’s talk about the College Football Playoff Rankings. Alabama deserves to be in. It’s about the best teams, not the best records. I know I’m in the minority on that last point, but it’s the best way. If you start rewarding records more than schedules we’ll have too many Alabama vs. Mercer matchups. Anyway, Oregon doesn’t belong in there. Michigan State will be out of soon enough. Cincinnati is a fine squad but you’re crazy if you think they belong in the same conversation as Ohio State and the SEC big boys. Again, my only hope for the playoff rankings is they reward schedules over records. Cincinnati’s schedule is weak. Oklahoma’s is weaker. If you want to let more teams in, that’s fine, but don’t punish the teams we know are the best because they play a tougher slate. DOLPHINS -6

Falcons at Saints
I’m hugely excited for the NFC playoff push. While the push for the top seeds will certainly be fun, there will be a blood bath in the middle of the conference for those last two Wildcard spots. There are currently seven teams between 4-4 and 3-4 in the NFC. I’d expect the Saints at 5-2 to drop into that pack over the coming weeks as well. If I had to make a prediction, I still think the Vikings figure things out and the favorable schedule of the Eagles makes them a prime candidate even though I think they stink. FALCONS +6

Raiders at Giants
The Raiders have been through a lot this season. They’ve been exceptional at rallying on the football field. With that said, the Henry Ruggs situation is a heavy one to deal with in a short period of time. I think traveling across the country to visit a desperate Giants team that’s been playing real hard of late isn’t the best medicine. GIANTS +6.5

Patriots at Panthers
I think Carolina and Miami were smart to pass on Deshaun Watson given all the uncertainty of his situation. However, the Panthers have no plan at quarterback and likely will have no better solution in 2022 unless they can trade for Russell Wilson or perfectly assess one of the many uncertain quarterbacks in the 2022 draft. Many teams are in a similar position. The disappointing performance of the 2022 quarterback class has left many teams in limbo. The Panthers, Eagles, Saints, Texans, Broncos, and Steelers are the most obvious victims. PATRIOTS -4

Bills at Jaguars
Jacksonville doesn’t do anything remotely exciting. There are some reasonably exciting players on that team and it’s a snooze fest every weekend. For what it’s worth, the Bills play the Jets next week. That equates to a month long bye week. JAGUARS +14.5

Vikings at Ravens
Is Mike Zimmer just cashing checks and waiting to be fired? Minnesota is way too talented to be a middling 3-4 team. There’s no excuse for them losing to Dallas’ backup quarterback… at home… out of a bye week. Sunday night’s defeat was the 2nd time in a month the Vikings scored on their opening drive and never sniffed the end zone again. I don’t know if Klint Kubiak needs to go or if Zimmer’s inevitable firing will kick this team into gear, but something needs to happen in the next two weeks before all is lost. (Ok, so the bottom of the NFC is such a mess that the last playoff spot will be in play for a long, long time but you get the point.) VIKINGS +6

Chargers at Eagles
I didn’t do a Bird Feed this week because beating the lifeless Lions before their bye week didn’t change much about how I feel about this Eagles team. Jalen Hurts is still a bad quarterback. I still do not trust the defense. I do, however, believe Nick Sirianni has seen the light when it comes to running the football. In fairness, he may have even seen it a week prior but the Miles Sanders injury ruined his game plan. Regardless, the Eagles offense can be formidable if they continue to run the ball with such dedication and of course, effectiveness. Eventually, that will loosen up the back end of the defense and give Hurts more opportunities to throw into open spaces. Something he obviously needs in order to get the ball downfield. The Chargers are struggling and are probably licking their chops to get after an Eagles team that hasn’t faired well against teams with above average offenses. CHARGERS -2

Packers at Chiefs
Before you pass judgment on Aaron Rodgers and call him a quack or an idiot remember free speech and free thought isn’t just reserved for the establishment or people you agree with. Also, I’m excited to see what Jordan Love is about, so thank you, Rodgers for being unvaccinated. CHIEFS -7

Cardinals at 49ers
Kyler Murray looks more hurt with every passing week. He’s a great player but his size does raise concerns about durability. Murray’s performance suffered drastically at the end of the 2020 season due to mounting injuries and the same has already started in 2021. I said last week he already isn’t running anywhere near as much as he did a year ago, and he missed a lot of throws Thursday night as well. The 49ers have done better than most at limiting Murray the last two seasons, so between San Francisco’s desperation and the mounting Arizona injuries, I wouldn’t be surprised by an upset. With that said, I still think the Cardinals win if Murray plays. If he doesn’t, then… 49ERS -2.5

Titans at Rams
The Titans are going to need a lot more out of Ryan Tannehill to overcome the Derrick Henry injury. Tannehill is basically having the same season as he did in 2020 but has already matched his interception number from last year. His touchdowns are also way down but that’s a product of receiver injuries and Derrick Henry dominating in the red zone. The Titan offense went as Henry went. I’m sure the Titans will continue to run the ball effectively but the offensive load will now fall on Tannehill. The interceptions are a concern because that defense isn’t good enough to limit damage from those turnovers. Less Henry means more throwing which in turn means more interceptions. Tannhill must reign in his interception struggles. In a lot of ways, the Titans… without a potent ground attack… are now the Chiefs. RAMS -7

Bears at Steelers
Justin Fields was a lot of fun last week. Matt Nagy’s absence was a fun wrinkle, too. Nagy never developed Mitch Trubisky, so it seems odd to me that the Bears would give Nagy a healthy leash to develop (or ruin) another young quarterback. I know Nagy didn’t draft Trubisky, but he also never made him better. Speaking of questionable quarterbacking decisions… are we sure Ben Roethlisberger is Pittsburgh’s best option? The Steelers would be really, really good with a quarterback that could stretch the field. I don’t remember Mason Rudolph being so awful that he’d make this offense any worse. I fully trust Mike Tomlin, though, so whatever he says I will follow, but maybe give Rudolph another look? STEELERS -6.5