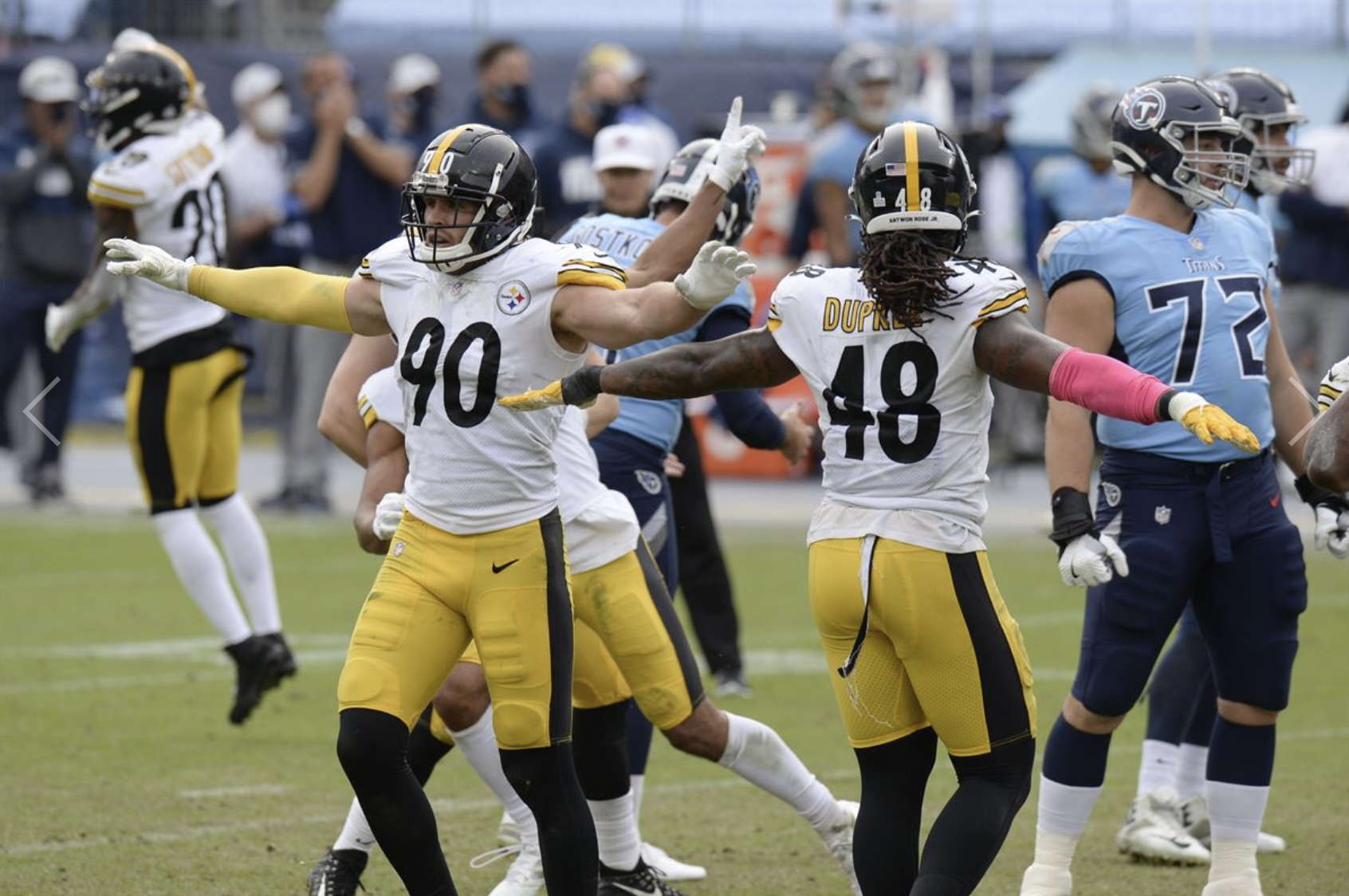 The Steelers have been the best of the AFC North in 2020, but are we  sure they’re that good? (Photo by AP)

We’ve had some back end technical difficulties this week that made the site uneditable (is that a word?) until about 12 hours ago. Thus, we’ll have to rapid fire through Week 8. My apologies. I know how much the world needs this right now. Truly, truly sorry.

Falcons 25 at Panthers 17
Atlanta finally closed out a tight game Thursday night. Don’t sleep on the Falcons wreaking havoc on the NFC South in the second half of the season. Atlanta still has two games against both the Saints and Buccaneers. Despite a 2-6 record, the Falcons aren’t that bad. Against Dallas in Week 2, the Falcons had a 99.9 win probability. In Week 3 against the Bears, their win probability was 99.3. Last week against Detroit, the Falcons win probability was at 95.9 with less than a minute to go. Those aren’t coin flip games; those are lightning strikes and snakebites.

Looting A Five Below (Bye Week)

Cardinals
Between the end of that Seahawks-Cardinals game and the Penn State-Indiana game the day before, I can’t handle anymore atrocious game-managing this week. I need a week of recovery.

Football Team
Seriously, did anyone else want to aggressively slam finger into James Franklin’s forehead Saturday evening? What was that?!?!?! First, your players all have to know scoring is the 2nd worst thing that could happen in that situation. A turnover would obviously be the worst. Second, what was Penn State doing on 2nd and 1 with 11 seconds left? The play was a designed time-waster. I get it, but why? There were 11 seconds left. The clock stops momentarily with a first down in college. Run the football there. In all likelihood, you’re going to get the 1st down and probably another couple of yards to boot. Even if you don’t, that’s plenty of time to line up and kill the clock. Instead, Franklin runs the wasted play and kicks the 57 yard field goal. It missed by two feet. Brutal.

Jaguars
Garder Minshew will be Ryan Fitzpatrick 2.0, minus the Harvard education. He may be an overqualified backup, but he’s in over his head as a starter.

Texans
While Houston hasn’t been much better since Bill O’Brien got the canned, Deshaun Watson has quietly taken off. In the four games under O’Brien, Watson threw for 1,092 yards at a 65% completion percentage, 6 Touchdowns and 4 Interceptions. In the three games since, Watson’s numbers have jumped to 1,003 yards, 74%, 9 TDs and 2 Ints. Sure, his attempts are slightly up, but he’s producing at a greater efficiency than before. Playing better with more opportunities is a very good thing for a team in a very bad place.

Patriots at Bills
I’m probably the only person on planet earth to take this position, but man do I feel bad for Patriot fans. That team is brutal. Losing is a big part of sports. It happens to everyone. Even irrational fans understand this. There are different levels of losing, though, and New England’s is pretty low right now. For example, the Bengals keep losing, but Joe Burrow and young receivers make their games fun and exciting, albeit painful. Even the Giants have some bright spots at the talent positions that keep many fans engaged. The Patriots have none of these things. None. Their 1st and 2nd round picks have been flat out duds. New England’s top offseason acquisition is playing like a quarterback that remained unsigned for the entire summer. Even the Patriots boring, yet solid defense is struggling. Another loss Sunday could be the earliest end to a Patriots season in over two decades. PATRIOTS If I were Charles Barkley; Patriots +4

Titans at Bengals
Cincinnati is struggling through the growing pains of a full rebuild. However, if I’m a Cincinnati fan, I am loving the 2020 season. Sure, 1-5-1 is bad, but the Bengals are ultra competitive despite losing. Only once have they lost by more than one score. TITANS If I were Charles Barkley; Titans -6

Raiders at Browns
The opportunity for Baker Mayfield to prove himself as a franchise quarterback has officially arrived. This will essentially be his 2nd game without the offense’s two most elite talents (Nick Chubb and Odell Beckham). Last week Mayfield looked like the top overall pick the Browns drafted back in 2018. He was decisive, accurate and unafraid. Was it due to the loss of Beckham? Who knows. While it seems plausible, only Mayfield really knows for sure. One game is a hardly a trend. However, if Mayfield goes on a run here and makes an average receiving corps a threat in the AFC North, then it will be harder to refute the loss of OBJ didn’t free up Mayfield. RAIDERS If I were Charles Barkley; Raiders +2.5

Colts at Lions
The Colts are one of a handful teams that should be paying close attention to the Dallas Cowboys. There’s a decent chance Dak Prescott isn’t a Cowboy next season. If Dallas continues its free fall, they’ll likely land a top 5 pick. They’ve clearly had problems with Prescott’s contract demands. A top rookie quarterback would not only give Dallas the opportunity to reset the franchise, it would provide them a significantly cheaper (and now less damaged) option. If Dallas’ descent continues, teams like the Colts would be thrilled to have a player like Prescott available. The Colts won’t be competing for a top pick like the Jets, Vikings, Jaguars or perhaps even Washington. Philip Rivers obviously isn’t a long-term solution. I’d imagine the Colts, Bears, 49ers and maybe even the Steelers or Saints will be watching closely as the Cowboys play out the 2020 season. LIONS If I were Charles Barkley; Lions +3

Vikings at Packers
At 1-5 the Vikings are all but officially done for 2020. Teams coming off a bye knowing their season is toast can be scary for gamblers. Are they excited to get back to playing or did the bye week drain them of all investment in a lost season? Kirk Cousins should have plenty to play for as his job in 2021 is likely on the line. Cousins’ Jekyll and Hyde act is played out, especially since he’s been less Jekyll and more Hyde in 2020. PACKERS If I were Charles Barkley; Packers -6

Jets at Chiefs
Outside of a parade of turnovers, I’m not sure the Chiefs offense could’ve played worse last week in Denver. Sure, the Kansas City defense and special teams limited Patrick Mahomes and the offense’s touches, but they were still pretty bad. The Chiefs were 0/8 on 3rd downs, 3/6 in the red zone, and failed to pass 300 yards of total offense for the first time this season. (Surprisingly, Kansas City was held below 300 yards of total offense twice last year, and only one of those games was related to Mahomes’ injury.) I wouldn’t feel great if I were the Jets. I doubt the Chiefs offense gets bogged down two weeks in a row. CHIEFS If I were Charles Barkley; Chiefs -20

Rams at Dolphins
It’s Tua time. I hope for all parties involved he doesn’t wear the Aaron Donald backpack. I mentioned this last week, but the move to Tua is an interesting one. Miami is in legitimate position to win the AFC East. Moving to Tua means they’re either A. Less concerned with winning at this time or B. Tua has gotten so good in practice that they believe they’ll be even better with the rookie under center. A similar thing happened in Philadelphia in 2016 with Carson Wentz and Sam Bradford. Only it happened in the final two weeks of training camp. DOLPHINS If I were Charles Barkley; Dolphins +3.5

Steelers at Ravens
Has anyone stopped to wonder if perhaps both of these teams are just a little overrated? Baltimore has 5 wins against teams with a combined 11-22-1 record. Pittsburgh has 6 wins. Those teams have a combined 16-23-1 record. Both teams are in the top 5 of every Power Ranking out there. Again, are we sure these teams are as good as we’re hyping them to be? The truth is, the AFC North struck gold with the 2020 schedule. They play the dreadful NFC East and the lopsided AFC South. That’s almost 6 guaranteed wins right there. I love this rivalry. I’m not trying to hate. But let’s slow down on the abundance of love, especially on the Baltimore side. STEELERS If I were Charles Barkley; Steelers +3.5

Chargers at Broncos
Denver fans, management, players, venders and everyone else involved with the Broncos must be insane with anger. They’ve been tirelessly searching for a franchise quarterback for the better part of two decades. They struck gold for a few years with Peyton Manning before his arm gave out. Other than that, it’s been a quarterback wasteland. Now here come the Chargers, fresh off 14 years of Philip Rivers as their starting QB, running out a 22 year-old Dan Marino remake. Herbert already throws one of the nicest deep balls in the league. He’s not perfect (yet), but he doesn’t turn the ball over and he’s resilient and unflappable. Drew Lock, meanwhile, has one TD to Herbert’s 12, 4 interceptions to Herbert’s 3, and 900 fewer yards. BRONCOS If I were Charles Barkley; Broncos +3.5

Saints at Bears
So is Michael Thomas turning into Terrell Owens or Antonio Brown? One is worse than the other and Thomas is trending in that direction. Owens was a headache and at times a team cancer, but he produced on the field. He played and played well. Antonio Brown became such a problem he couldn’t even make it to the field on Sundays. Be it team suspensions or league suspensions, Brown’s absences started mounting. Thomas has played once this season. While we know he was injured early in the season, he was scheduled to return weeks ago. Now new “injuries” keep popping up as rumors swirl about Thomas’ future. Is this a mini protest? Are the Saints trying to move him? Is he actually injured? I’m buying the injury stuff least of all. Also, Nick Foles and that Bears offense? No thanks. SAINTS If I were Charles Barkley; Bears +5

49ers at Seahawks
I’m not ready to declare the defending NFC Champions back like many others. I’ll hold off until I see where they’re at after their upcoming slate; GB, @NO, @LAR, BUF. Let’s not forget, this team lost to the Eagles and two of their wins are against New York muck. SEAHAWKS If I were Charles Barkley; Seahawks -3

Cowboys at Eagles
It’s hard for Dallas to find positives in a season of such despair, but the Cowboy defense played its best game of the season in Washington last week. They surrendered less than 200 yards passing for the first time all year. Giving up 25 points was the first time they allowed less than 34 since Week 1. I won’t mention that Washington’s offense was dead last entering the week, or that they increased their scoring average or that they rushed for 130 yards more than their season average. No, I won’t mention those things because Dallas fans have been through enough. With that said, the Eagles are going to find a way to keep Dallas in this one. The last wire-to-wire win for Doug Pederson and the Eagles was over a year ago; October 27th 2019 in Buffalo. EAGLES If I were Charles Barkley; Eagles -9.5

Buccaneers at Giants
The Giants have to be kicking themselves HARD after the last three weeks. They couldn’t keep a 3-point lead against Andy Dalton late in the 4th quarter. A week later they squeaked out a victory over the Washington Football Team despite one of the ugliest offensive performances the league has seen this year. Last week they managed to lose an 11-point lead in a matter of minutes to the Eagles. If the Giants are even remotely bad instead of awful, they’re likely 3-4 and in complete control of the NFC East. But nope. BUCCANEERS If I were Charles Barkley; Buccaneers -12