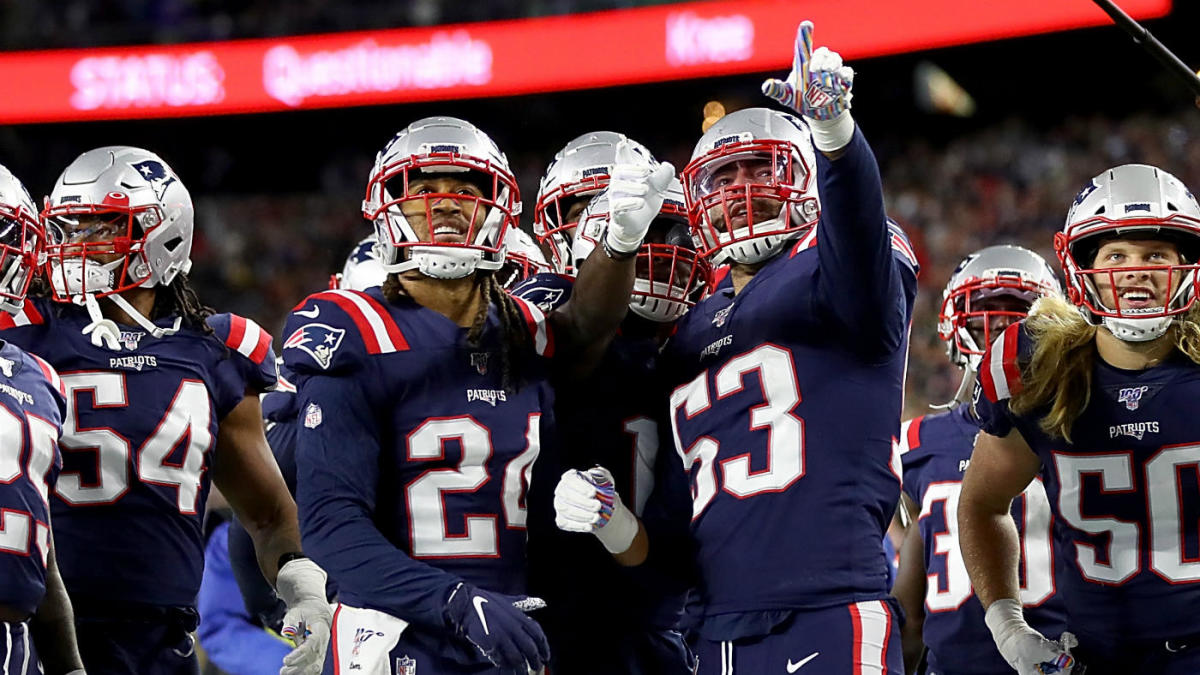 The Patriots greatness is nauseating and annoying. It’s also something to behold. (Photo by Getty Images)

I’ve been sick so the picks will be short this week. I’ve also really sucked this season so I’m sure you don’t care anyway.

Redskins 9 at Vikings 19
What would a team offer the Redskins for Dwayne Haskins? If someone called and offered a third rounder, Washington would think about it, right? I know it’s early in the process, but he’s the worst rookie QB since… JaMarcus Russell? Honorable mention to DeShone Kizer.

Cowboys
Michael Bennett will be a nice addition for Dallas right up until he fights with someone on the coaching staff or a teammate. He’s nuked his last three stops. Not sure why this one would be any different.

Ravens
I like quarterbacks that are potent in the passing game. On the other hand, I like what Lamar Jackson is doing to show the value of a rushing attack in the NFL. Nothing is more demoralizing to a defense than getting run over.

Seahawks at Falcons
I keep waiting for Dan Quinn to get fired and it just won’t happen. Then I saw this tweet (below) and it makes a little more sense. Quinn hasn’t lost the locker room yet. This made me want to pick the Falcons but without Matt Ryan? Unless Matt Schaub is Nick Foles I’m going to pass. SEAHAWKS If I were Charles Barkley; Seahawks -9

Julio Jones, in the locker room following the loss to the Rams, raised his hand while HC Dan Quinn was addressing the team, asked to talk and then gave an emotional speech:

"This man has done everything for us.. it's on us.. it's not on Qhttps://t.co/boYmxI2AXH pic.twitter.com/L8nT0wMN5H

Eagles at Bills
The Patriots are great because Bill Belichick has built a culture that demands greatness for no other reason than being great. The Eagles and Doug Pederson thought winning a Super Bowl and calling it the “New Normal” was all it took to build such a culture. They’ve been wrong. Loud wrong. The Eagles have been at their best when, as a team, they can channel their energy toward a negative outside source. In 2017, it was everyone saying they couldn’t win without injured Carson Wentz. In 2018, it was everyone saying they were toast at 6-7 with the Rams and Texans on deck. This season, the Eagles have floundered. In-fighting and poor play have ruined what started as a season with high expectations. Then Orlando Scandrick ripped the organization, the locker room, and individual players. And voila! The Eagles have their 2019 nemesis. EAGLES If I were Charles Barkley; Eagles +2

Chargers at Bears
Are there two teams more disappointing than these two? At least Chicago can point to incompetent quarterback play. The Chargers have found magical ways to turn wins into losses. BEARS If I were Charles Barkley; Chargers +3.5

Giants at Lions
I feel bad for Detroit. They looked poised to defeat the Packers and then the refs swung the game. Since then, the Lions lost their starting running back, strangely traded their starting safety for peanuts and upset the locker room as a result. Maybe next year, Detroit. I’m scared to pick the Lions here because that locker room appeared ready to revolt this past week. LIONS If I were Charles Barkley; Lions -6.5

Buccaneers at Titans
I don’t want to watch this game. Last time the Titans were remotely interesting was the Eddie George era and even then they were pretty boring. BUCCANEERS If I were Charles Barkley; Buccaneers +2.5

Broncos at Colts
I’m always wrong. Last week I insinuated Aaron Rodgers was washed. I also said the Falcons would beat the Rams. I thought Denver would be a playoff team this year. I don’t know what happene…. Oh yeah I do. Joe Flacco happened. COLTS If I were Charles Barkley; Colts -5.5

Bengals at Rams (London)
Last week, on three consecutive Bengal drives with Cincinnati trailing by 7, Andy Dalton went 1/6 for 0 yards and 3 interceptions, one of which was returned for a touchdown. It’s been a rough year for the Red Rocket. BENGALS If I were Charles Barkley; Rams -13

Cardinals at Saints
Drew Brees is coming back. I only heard one Teddy truther this week and I couldn’t even tell if he was serious or not. Though they may not be this week, the Saints are a much better team with Brees. SAINTS If I were Charles Barkley; Cardinals +12.5

Jets at Jaguars
The Jaguars are a good team; solid quarterback play, a pounding running game and good defense. Of course, I also said similar things about the Broncos a few weeks ago. JAGUARS If I were Charles Barkley; Jaguars -6.5

Panthers at 49ers
I don’t want to call the 49ers overrated, but that offense has some issues. I think the Panthers defense is good enough to put its offense into scoring position and perhaps even score points on their own. If they can do that, I like their chances. PANTHERS If I were Charles Barkley; Panthers +5

Browns at Patriots
The Patriots are really good every single year. Some years it’s the passing game that carries the team. Other years it’s a pounding running game and stout defense. This year it’s an impenetrable pass defense. Bill Belichick doesn’t have a system. He adjusts his system every season to fit personnel. It’s what great coaches do. Coaches who think they’re great try to fit players into their system, but consistent success comes from adaption. Belichick has adapted to every change in the game over the last two decades and there’s no other franchise or coach on the same level as the Patriots. Though most hate it/them, it’s an amazing feat that somehow doesn’t get enough attention. The Patriots are also great in their approach. They just want to win to be great. There’s no nonsense around the team like there is in Cleveland. No us against the world like in Philly. Just winning. That’s all. And they’re great at it. PATRIOTS If I were Charles Barkley; Browns +11.5

Raiders at Texans
Deshaun Watson is really, really good. He makes plays that make you believe he’s every bit as good as Patrick Mahomes, and he may be. However, he also makes a handful of plays every game that makes you scratch your head. I often wonder what it would be like if Watson played in an angry sports town like New York or Philadelphia. TEXANS If I were Charles Barkley;. Raiders +7

Packers at Chiefs
Like everyone else, I was hoping Patrick Mahomes would be available Sunday night. While the game is significantly less exciting, I’ll be watching to see what the Chiefs look like with Matt Moore under center. Andy Reid was a master at winning with backups while in Philadelphia. I think the Chiefs are going to surprise people Sunday night. CHIEFS If I were Charles Barkley; Chiefs +5

Dolphins at Steelers
I like the NFL’s approach to Monday Night Football: Give ESPN games that are on par with their commentators. When ESPN puts legit professionals in the booth, maybe then the NFL will grant them games worthy of watching. STEELERS If I were Charles Barkley; Steelers -14