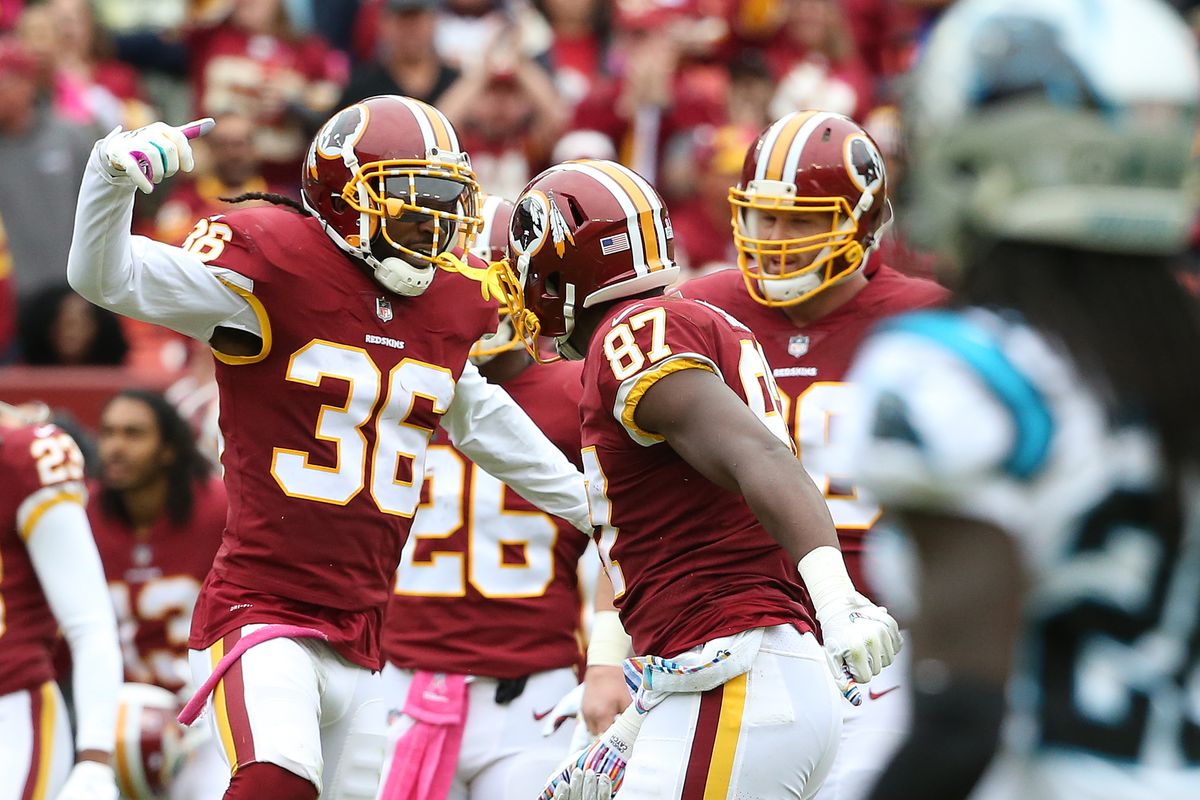 The  NFC East isn’t as bad as you think.  (Photo by Geoff Burke-USA TODAY Sports)

Falcons
Atlanta is a horrible sports town. No one is ever at Falcon games. Don’t give up on the Falcons yet. Their defense has slowly improved and my money is still on the NFC South sending three teams to the playoffs.

Cowboys
If the rumors of the Eagles sending Oakland a 2nd round pick for Amari Cooper were true and Cooper ended up in Philadelphia, I would be furious. Cooper hasn’t been good in two years. Dallas sending a first is amazing. Jerry Jones and Jason Garrett are two of the top five greatest things about being an Eagles fan right now.

Titans
I liked Mike Vrabel going for two and the win last week against the Chargers. San Diego was the better team. If you only need one yard on one play to win, you take those odds and give it your best shot. With that said… the Titans were clearly discombobulated prior to their first attempt because they were rushing and were out of timeouts. After a Chargers penalty gave them a second chance, THEY WERE STILL FRAZZLED. At that point, I think you have to kick the extra point. I’m always amazed how poorly teams perform following big plays or scores. Is this just something they don’t practice?

Chargers
No one is talking about the Chargers. They’re quietly 5-2 with losses against the Chiefs and Rams. You’ve been warned.

Dolphins 23 at Texans 42
Turns out I was completely wrong. I confused Deshaun Watson driving to last week’s game on a bus with Thursday night’s contest. I also assumed he would play like he has the last two weeks. I also assumed the Dolphins wouldn’t be atrocious. Wrong all around. As expected. Per usual.

Eagles at Jaguars
Jimmy Kempski went through all nine of Carson Wentz’s potential game-winning drive performances. It was depressing. I wish I never read it. I’m not prepared for 3-5 and stressing about Markelle Fultz being Anthony Bennett. If Doug were truly a great coach, he’d play Nick Foles Sunday, get him to repeat his Super Bowl performance, and then trade him to Jacksonville for a 2nd rounder on Monday. EAGLES If I were Charles Barkley; Jaguars +3.5

Jets at Bears
Chicago can’t feel great about not having a first round pick until we have a new President (or a 2nd term). I didn’t like the Mack trade from the jump, but it keeps looking worse by the week, and that has nothing to do with Khalil Mack. The Bears just aren’t close to competing for their own division, let alone the conference. Mitch Trubisky is exciting and athletic, but he’s not very good at quarterbacking. The defense has giving up more than 30 points two weeks in a row and Matt Nagy still can’t figure out how to get Jordan Howard going. Did I mention big free agent acquisition Allen Robinson has caught three or fewer passes in three of the last four games and only averages less than 50 yards per game? The Jets are visiting just in time for Chicago. Sam Darnold had four turnovers last week. If Mack is healthier than he’s been the last two weeks, things could get ugly quickly for the Jets. BEARS If I were Charles Barkley; Bears -8

Buccaneers at Bengals
I was a believer in the Bengals. I thought they could contend for that second seed in the conference. Then they lost two straight to other AFC contenders, including an embarrassing no-show last week against the Chiefs. Andy Dalton is coming off his worst two weeks of the season. The offense, after averaging 31.5 points through the first four weeks, has struggled of late, averaging only 19 points since. Help is on the way, though, and it’s not coming from within. The Buccaneers rank dead last in pass defense and points allowed. Dalton’s redemption starts Sunday. BENGALS If I were Charles Barkley; Bengals -4

Seahawks at Lions
Call me crazy, but I think the Lions are the team to push the Vikings in the NFC North. Narratives are hard to change when you’re a notoriously losing franchise. Getting blown out by the lowly Jets on national TV to kick off the season certainly doesn’t help either. The Lions are good, though. Kerryon Johnson has added a running game to an already lethal aerial attack. Matt Patricia isn’t even a disaster as head coach like many thought. The next six weeks will make or break Detroit’s season. All six will be against teams contending for NFC Playoff berths and only two will be on the road. LIONS If I were Charles Barkley; Lions -3

Broncos at Chiefs
The Chiefs are really good. They have a lot of weapons. It’s hard to stop them. Blah blah blah. Can we talk about the NBA real quick? Ok, thanks. I just want to say that the NBA’s suspensions of Brandon Ingram and Rajon Rondo were suspiciously soft. It’s almost like the NBA doesn’t want LeBron James missing any critical teammates for too long. Funny thing is, the Lakers have looked better without either of those guys than they did with them. Thank you for your time. Oh, real quick, the Broncos are the best team everyone has forgotten about. That weird loss to the Jets on a short week after a deflating loss to the Chiefs on Monday night is the only blemish on their slate. They’re pretty good. CHIEFS If I were Charles Barkley; Broncos +10

Redskins at Giants
I’m tired of everyone pretending the NFC East is the worst division in football. Sure, the division lacks a great, or even very good, team. However, look around the NFL, the AFC East and NFC West have a top dog and then nothing under them. The AFC South is again a dumpster fire. If point differential is your thing, the NFC East as a whole owns a better point differential than the AFC South, AFC East, and NFC West. So there. REDSKINS If I were Charles Barkley; Redskins +1.5

Browns at Steelers
Cleveland’s knack for forcing close games and overtime is misleading. They’re not even that good. If not for the Buccaneers’ own incompetence, Cleveland likely would’ve gotten their doors blown off in Week 7. Up 16-2, Tampa managed to turn the ball over on three straight drives over the 2nd and 3rd quarters. The first occurred inside Cleveland territory. The other two inside Tampa’s own 30. At this point, it’s quite obvious the Browns are only keeping Hue Jackson around to ensure another top five pick. Not a horrible move. STEELERS If I were Charles Barkley; Steelers -8

Ravens at Panthers
The unthinkable happened last week for both of these teams. The Panthers erased a 17 point deficit in less than ten minutes. The Ravens all-pro kicker missed a game-tying extra point for the first time in his career. After re-watching last week’s Saints/Ravens contest, I couldn’t help but wonder if something was up with Justin Tucker. I confess, I do not recall any weather conditions drastically impacting the game. However, I know at times the wind impacted the Panthers/Eagles game, which is about 100 miles away. Anyway, Ravens coach John Harbaugh passed on a 52 yard field goal attempt in the 2nd quarter and then again on a 53 yarder in the 4th. At the time of the 53 yarder, the Ravens trailed by 4 with close to 3.5 minutes to go. It’s not that big of a deal, but usually Baltimore doesn’t hesitate to trot Tucker out there for 50+ yarders. Also, and this is absolutely me playing Monday Morning Quarterback, but the Saints scored two touchdowns and a field goal on their three possessions prior to the Ravens scoring want many believed was the game-tying touchdown. If I’m facing Drew Brees, I like my chances from two yards more than going to overtime. But I’m also an idiot. PANTHERS If I were Charles Barkley; Panthers +2.5

Colts at Raiders
Too many kickers have been poisoned by 2018. Week 7 took out the most accurate kicker in NFL history (Justin Tucker) and the 2nd highest scorer as well. Poor Adam Vinatieri had a day to forget. Vinatieri missed two extra points and had a third bounce off the upright and in. Kickers can’t win in 2018. I’d like to announce right now the Colts will win double digit games in 2019 and make the playoffs. Frank Reich is a good coach. That roster lacks talent but they compete. Those teams often make a jump in the second year. COLTS If I were Charles Barkley; Colts -3

Packers at Rams
The Packers just aren’t good. Aaron Rodgers erases a lot of mismatches, but this might be too much. With that said, everyone in the NFL loses at some point. That Rams pass defense isn’t nearly as good as advertised. I know they’re top ten against the pass, but I believe that’s a schedule stat. They got Sam Bradford in Week 2 and CJ Beathard last week. I’m going to stick with Rodgers for the heck of it. PACKERS If I were Charles Barkley; Packers +8

49ers at Cardinals
Hey! Dante Pettis is supposed to be back this week! Also, I’m watching the Red Sox and Dodgers in the bottom of the 15th right now. I imagine you reading this information is more exciting and interesting than anything you’ll see or hear if you were to watch the 49ers and Cardinals. CARDINALS If I were Charles Barkley; Cardinals +1.5

Saints at Vikings
Minnesota is a strange team. They vacillate between unstoppable and dumpster fire quite regularly. Take last Sunday against the Jets as an example. The Vikings scored a touchdown 90 seconds into the game. Their next eight drives went punt (x3), field goal, punt (x3), missed field goal. Six of those drives failed to generate a single 1st down. I’m not convinced this team is any better with Kirk Cousins than they’d be with Case Keenum. Nonetheless, I’m excited about this one. These are undoubtedly two of the top five teams in the NFC right now. I like New Orleans, but for the life of me can’t figure out the obsession with Taysom Hill in the red zone. Hill was under center on 4th and 1 from the Baltimore four. It did not go well. I’m early on this, but Brees is really good. I think he’s going to be good at throwing touchdown passes. Let him play quarterback in the red zone. VIKINGS If I were Charles Barkley; Vikings +1.5

Patriots at Bills
New England scored 38 points and played like garbage for the better part of Sunday’s win against Chicago. The Patriots first four possessions went touchdown, fumble lost, fumble lost, kickoff return for touchdown. They lost the turnover battle, time of possession battle, had fewer total yards, and even committed more penalties. They even dodged a successful Hail Mary. Did I mention New England has scored at least 38 points in four straight games? This should be a blowout with New England flirting with 50, which undoubtedly means it’ll be a one possession game with Buffalo on the verge of an upset. PATRIOTS If I were Charles Barkley; Bills +14