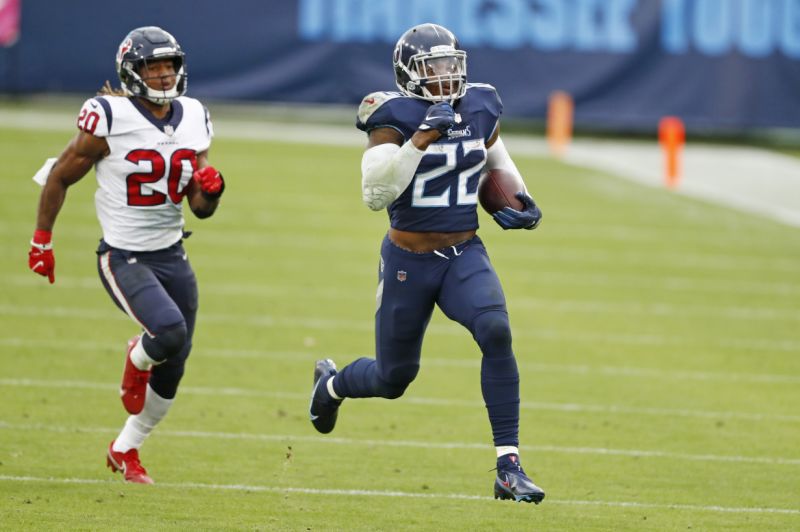 Derrick Henry and the Titans face their toughest test yet, Dallas is in trouble, and Kansas City’s potential kryptonite (Photo By AP Photo/Wade Payne)

A big welcome back to Big Ten Football. Now we can stop pretending the Big 12 and ACC (Clemson excluded) are worth our time and attention.

Giants 21 at Eagles 22
Right now the Eagles are Andy Dufresne crawling through the sewage pipe. They may never make it out, or, like Andy, they’ll emerge stinky as hell to the fresh rain of the postseason. I don’t care what anyone says, the NFC East is riveting in so many bad ways.

Bickering Over A Laptop (Bye Week)

Colts
It was nice to see Philip Rivers prove he still has a little left in the tank, even if he did throw another bad interception in the 4th quarter.

Dolphins
I thought Tyrod Taylor’s benching earlier this season was rough. Ryan Fitzpatrick’s may be worse. Fitzpatrick was healthy and playing well. He had the Dolphins in contention for their first AFC East title in over a decade. Cruel world. Unlike Taylor, Fitzpatrick did not have a punctured lung, so I guess there’s that.

Vikings
Justin Jefferson is the truth. It’s a bad year for Vikings fans but between Jefferson and Dalvin Cook Minnesota has two of the NFL’s most exciting young talents.

Ravens
Baltimore improved their pass rush during their off week. Some organizations win even when there are no games.

Lions at Falcons
Kenny Golladay is quietly one of the league’s top receivers. He’s a dynamic deep threat and terrorizes cornerbacks with his unique combination of speed and size. The Detroit offense has been significantly better since Golladay’s return. If D’Andre Swift can produce more days similar to his Week 6 performance, the Lions will be a real Wildcard threat in the NFC. LIONS If I were Charles Barkley; Lions +2

Browns at Bengals
Baker Mayfield has been really, really bad for 6 straight quarters. He’s injured, so perhaps that’s a big contributor to his struggles, but Cleveland can’t be taken seriously until he proves he can be a reliable quarterback against the better defenses in the division. Cleveland has scored 13 points against the Ravens and Steelers combined. The Bengal defense is bad. When the Browns can run the football, it’s hard to beat them. BROWNS If I were Charles Barkley; Browns -3

Steelers at Titans
I’d probably pick against the Titans this week if they were playing all but five or six teams. They’re overdue for a loss. They tried so hard to lose last week but Houston just wouldn’t let them do it. Ok, ok, they weren’t that bad. We’re in year 5 of Derrick Henry’s career and it’s still amazing to see him run the football. Someone who is 6’3 and 250 lbs. shouldn’t be separating from defensive backs in the open field. It’s unfair. Anyway, I think Tennessee’s poor pass defense finally costs them this week. They really struggle to pressure the quarterback. STEELERS If I were Charles Barkley; Steelers +1

Panthers at Saints
I finally got on the Panther train last week and Teddy Bridgewater did what I expected him to do the entire season. He was indecisive, inaccurate downfield, a disaster on 3rd down, and he turned the ball over in critical situations. Chicago’s defense is good, but Carolina played well enough to win that game. Their quarterback just wasn’t good enough. SAINTS If I were Charles Barkley; Panthers +7

Bills at Jets
It took a few weeks, but Buffalo’s lack of a rushing attack has started taking a toll on the offense. Kansas City dared Buffalo to beat them on the ground and the Bills couldn’t do it. Devin Singletary averaged less than 3.3 yards per rush for the 3rd consecutive week. Josh Allen’s performance over the past two weeks have regressed as well. An ineffective ground attack means deeper safeties. Allen’s average yards per attempt has fallen nearly 2 whole points in each of the last two weeks. Against Tennessee it dropped to 6.4 from 8.5. Against the Chiefs, it dropped from 6.4 to 4.5. I know I talk about running the football a lot, but most quarterbacks need a decent ground game to truly be effective through the air. BILLS If I were Charles Barkley; Bills -13

Cowboys at Football Team
The Dak Prescott injury unquestionably derailed Dallas’ season. On the other hand, I’m not sure how great of a season it would’ve been even if Prescott’s ankle didn’t do a 180. That Cowboys defense is atrocious. I expected them to rally last week now that their offense will likely struggle to score 30+ points. Nope. They were as bad as ever. Andy Dalton wasn’t great either Monday night. While I do expect him to improve week by week, I’m not sure it will matter if the defense can’t stop anyone. FOOTBALL TEAM If I were Charles Barkley; Football Team +1

Packers at Texans
Anyone else watch the Packers the last few weeks and wonder if Green Bay has already decided they’re not going to pay Aaron Jones this offseason? They seem intent on spreading the backfield load around more than they did a year ago. They also spent a 2nd round pick on running back AJ Dillon in the spring. I still think the Packers are at their best when Aaron Jones is heavily involved in the offense. With that said, if Aaron Rodgers is as big of a mess as he was in Week 6, no one, not even Jones, could save the offense. PACKERS If I were Charles Barkley; Packers -3.5

Chiefs at Broncos
Kansas City’s worst games this year have come against division opponents. It’s their defense that struggles the most. In 4 games outside the division, the Chiefs defense has allowed the opposing team more than 150 passing yards only once. In 2 games within their division, the Chiefs have allowed over 300 yards passing both times. The out of division opponents have not been cakewalks, either. They’ve faced Deshaun Watson, Lamar Jackson and Josh Allen. While I don’t expect Drew Lock to have the same success of Derek Carr or Justin Herbert, it’ll be interesting to see if the Denver offense has similar success. Speaking of Denver’s offense, I think they’re better with Philip Lindsay as their lead back. His stats are similar to Melvin Gordon’s, so I don’t have statistical evidence to support my claim. You just gotta trust me. CHIEFS If I were Charles Barkley; Chiefs -9.5

49ers at Patriots
I’ve said it countless times; I love Cam Newton. However, I’m not sure any quarterback gets the benefit of the doubt more than Newton. He was pretty terrible against the Broncos and almost everyone defends him by pointing to New England’s weapons, or lack thereof. Newton had some shiny weapons his final years in Carolina and still struggled badly. Tom Brady never got the no weapons excuse last year. He was just called old. If you want Newton to carry your offense by throwing it from the pocket, it’s going to go poorly more often than not. We have nearly three years of proof. I want to take the 49ers here but Raheem Mostert going down again is a huge, huge loss. With Mostert in the lineup last week, San Francisco racked up 285 yards and 21 points in the 1st half against the Rams. In the 2nd half (without Mostert), the 49ers totaled 99 yards and 3 points. PATRIOTS If I were Charles Barkley; Patriots -2

Jaguars at Chargers
My team resides in the NFC East, so I will try to remain unbiased here, but ProFootballTalk’s stance about the unfairness of the current playoff system was laughable. First, the season is still young. Maybe someone gets hot and wins 9 or 10 games. Second, one bad season doesn’t require systematic overhaul. Third, four divisions with one designated playoff spots keeps more teams invested in an entire season than three divisions would. Even in PFT’s proposed reshuffling, I counted 6 NFC teams that would likely have little to no shot of reaching the postseason (WSH, PHI, NYG, ATL, MINN, DAL). In the current setup, there are only two teams currently facing such a dreary situation (Minnesota and Atlanta). More teams in competition, for longer, is always the best option. Otherwise you become baseball. CHARGERS If I were Charles Barkley; Jaguars +7.5

Buccaneers at Raiders
If the Raiders are forced to play without their starting offensive line, then Derek Carr will have first hand experience what it’s like to be Carson Wentz. But seriously, good luck to Carr if a line of backups is protecting him against that defensive line. Tampa Bay’s defense is no joke. Their performance a week ago was incredible. Through four games, the Packers punted 7 times, total. They punted 7 times against the Buccaneers. Moving on… I’ve gone back and forth on Tom Brady this season. At age 43 it’s understandable to not play at the same high level week in and week out. He looked great last week, though. If I was new to football and you told me one quarterback was 43 and the other was a 36 year old MVP candidate, I’d have guessed Brady was the latter and Aaron Rodgers the former. BUCCANEERS If I were Charles Barkley; Covid Delay

Seahawks at Cardinals
Like the Titans, Seattle is overdue for a loss. One could argue the Seahawks haven’t played a good team (unless you count Miami as a potential division winner). Arizona finally established their running attack last week but I don’t know if pounding the Cowboys really counts. In a bit of a surprise, Kyler Murray quietly struggled against Dallas. He had two big touchdowns that padded his stats, but he looked off. I like Arizona’s flexibility on defense to challenge Wilson. I’m not convinced it’ll work, but I’d guess they’re going to use Budda Baker in a similar manner to how the Seahawks use Jamal Adams. CARDINALS If I were Charles Barkley; Cardinals +3.5

Bears at Rams
Outside of the Jets facing off against the Washington Football Team, I couldn’t think of a more boring offensive matchup than this one. I know a lot of people like Sean McVay’s offense. I’m not one of them. However, I will be tuning in to see who does the most damage to the opponent’s unathletic quarterback; Aaron Donald or Khalil Mack. RAMS If I were Charles Barkley; Rams -6