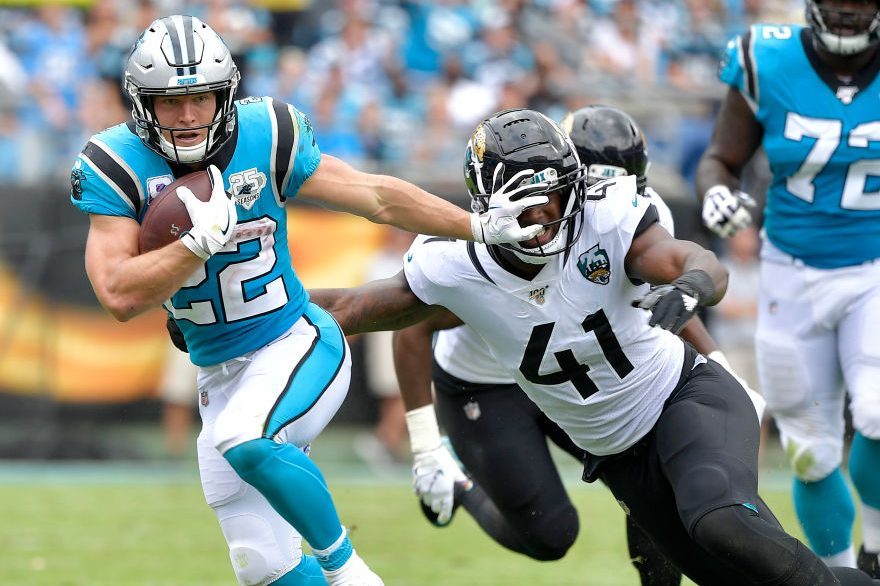 Russell Wilson and Patrick Mahomes have been stellar, but Christian McCaffrey is the real MVP. (Photo by Grant Halverson/Getty)

Quick update: The coin flip failed me miserably last week, so it’s back to my own awful predictions. Apologies in advance.

Giants 14 at Patriots 35
I won’t go as far as to say the Patriots offense needs help, but man have they been hard to watch the last few weeks. Josh Gordon has done little, the running game has averaged better than 3.4 yards per carry once in their last four games, and Tom Brady looks… dare I say… bored. Just bring Antonio Brown back. You’re already going to owe him that money.

Bills
As it sits right now, the Buffalo Bills will face just five teams with a winning record this season. Buffalo’s defense is legit, but come on; this can’t be a playoff team. Please don’t let this happen.

Bears
The Bears are the Bills with a 9.5% better offense, and unlike Buffalo, the Bears will play an overwhelming amount of winning teams. Of Chicago’s eleven remaining games, nine will be against teams with a winning record. The NFC is unfair.

Colts
As impressive as their victory over the Chiefs in Week 5 was, I’m not sold on the Colts as a playoff team. They’re already really banged up. Marlon Mack is great, but can he survive an entire season as the workhorse back, especially when he’s already battling injuries? Mack is Indy’s meal ticket. They can beat anyone with that recipe they used Sunday night in Kansas City. It’s just a matter of the ingredients being available.

Raiders
I saw a lot of Derek Carr numbers floating around the universe this past week. If I recall correctly, his red zone efficiency numbers are tops in the league. That’s a nice stat and all but Carr hasn’t impressed me for a while now. Since Amari Cooper lost interest back in 2017, Carr has been mostly a check down artist. Maybe Antonio Brown would’ve brought Carr’s big arm back to life. Who knows? Thus far, though, Carr ranks among the worst in the NFL in yards per completion. Only Luke Falk and Mitch Trubisky trail Carr.

Panthers at Buccaneers
Robert Mays of the Ringer is great, but I have problems with the following quote in regards to Christian McCaffrey’s MVP case…
“But even if McCaffrey continues to produce at this rate and Carolina eventually does make the playoffs, it’s difficult to justify any nonquarterback as a legitimate MVP candidate.”
First of all, if quarterbacks are so valuable, shouldn’t it count in Christian McCaffrey’s favor that his starting quarterback has been out for what will be four consecutive weeks? Second, McCaffrey’s production and impact from a non-quarterback position should be weighted more than a quarterback’s production. I mean, McCaffrey is putting up these numbers while actually playing football. NFL quarterbacks don’t really play football. They’re just out there participating while football occurs around them. Finally, quarterback love has reached full saturation. The position is completely overrated. Aaron Rodgers has one ring. Russell Wilson has had little team success since the dismantling of Seattle’s dominant defense. There’s more to football than quarterbacks and to this point of the 2019 season, Christian McCaffrey has been the best player in the sport. PANTHERS If I were Charles Barkley; Panthers -2.5

Seahawks at Browns
The Browns appear miserable right now. On a related note, Cleveland’s bye week is next week. Do they rally around going into the bye at 3-3 or are they already packed for whatever tropical destination they’re flying to Sunday night? I’m going with the latter. SEAHAWKS If I were Charles Barkley; Seahawks -2.5

Texans at Chiefs
The incessant love for Patrick Mahomes Sunday night was unbearable. I love Mahomes just as much as you but I kept yelling, “he has 10 points and it’s the 4th quarter!” at my TV. Also, have we already forgotten what prime Aaron Rodgers was capable of? He made all the throws Mahomes does now. I wouldn’t trade Mahomes for anyone else in the NFL but it’s time to scale back the love fest. Injured ankle or not, he didn’t play well Sunday night and struggled to wait it out in the pocket. Just look at the tape. He had Travis Kelce open a number of times but scrambled early and never saw him. Also, the Texans offense is every bit as good as Kansas City’s. The Chiefs defense is a problem. TEXANS If I were Charles Barkley; Texans +4.5

Redskins at Dolphins
The Dwayne Haskins pick looks worse by the week. If he can’t start over Case Keenum and Colt McCoy in a lost season it’s almost guaranteed Washington looks for another QB to draft as its cornerstone of the future. I don’t recall this ever happening in my lifetime and now it’s happened in consecutive years after Arizona did the same with Josh Rosen and Kyler Murray. REDSKINS If I were Charles Barkley; Redskins -3.5

Eagles at Vikings
I was pretty sure this would be an Eagles statement game. The offense was due for a big outing and the defense would finally find some footing against a quarterback low on confidence and high on mistakes. Then Zach Brown opened his big mouth and now I fear the worst. I’m fine with players talking trash, but make sure you’re someone who can actually impact the game before opening your mouth. VIKINGS If I were Charles Barkley; Vikings -3

Saints at Jaguars
Teddy Bridgewater is getting plenty of love after last week’s near perfect performance against the Buccaneers. He was great. My only push back is this: Bridgewater had receivers open by a country mile all game long. I’m not sure what happened to Tampa’s defense but whooo was it bad. New Orleans is certainly good enough to win anywhere against anyone with Bridgewater under center. I’m just not ready to declare the entire offense is now open because Bridgewater can all of a sudden throw downfield. JAGUARS If I were Charles Barkley; Jaguars -1

Bengals at Ravens
Is it possible Cincinnati has committed itself to a 1st half tank this season? Miami has clearly gone all in on a tank. The Bengals, meanwhile, are going halfsies on the tank. They perform so poorly in the first half and then scramble to respectability in the 2nd all while achieving the ultimate goal of any successful tank; losing. I love watching the 2nd half Bengals. In Buffalo two weeks ago, Cincinnati scored 17 points over a 15 minute span. Last week against the Cardinals, the Bengals dropped 14 points in 2 minutes and 8 seconds. Tanking is a miserable strategy that sucks the life out of teams and fans, but 2nd half tanking gives life and hope to all, if only for a brief stretch of time. I like it. RAVENS If I were Charles Barkley; Bengals +10.5

49ers at Rams
The 49ers are frauds. It’s not that hard to see. They’re 4-0 against teams with a combined 5-15 record. I know it’s a division game and all, but the Rams win this in a blowout. RAMS If I were Charles Barkley; Rams -3

Falcons at Cardinals
I’m not sure why Dan Quinn still has a job. Atlanta’s been a total disaster for two seasons now and the defense, his specialty, continually gets worse. At 1-4 in the loaded NFC, the Falcons are almost certainly done from a playoff perspective. However, if there were a tiny glimmer of hope, it would start this week. Arizona is arguably worse than the Falcons. They haven’t won at home since October 28th of last year. With a victory Atlanta could convince themselves they’re alive for playoff contention, and they wouldn’t be completely wrong. Of their final ten games, nine will come against NFC playoff contenders. There’s no easier way to move up the standings than to knock off those ahead of you. ….. You’re right, this is lunacy. Atlanta stinks. FALCONS If I were Charles Barkley; Falcons -2.5

Titans at Broncos
I haven’t given up on the Broncos as a Wildcard team in the AFC. Obviously the playoffs are a long way off, but we’re shaping up for a 9-7 or 8-8 wildcard team in the NFL’s JV division. Last week was the first time the Broncos really leaned on their rushing attack. That needs to be their formula from here on out. BRONCOS If I were Charles Barkley; Broncos -1.5

Cowboys at Jets
As long as Dallas thinks Dak Prescott is their meal ticket they’re going to go hungry. I’m interested to see what/who the Jets are this week. Remember, back in Week 1 when they still had their starting quarterback, the Jets were up 16-0 on the now 4-1 Buffalo Bills midway through the 3rd quarter. COWBOYS If I were Charles Barkley; Jets +7.5

Steelers at Chargers
I’m not Roger Goodell. If I were though, I’d find a team like the Steelers whose season will be pretty much toast after losing to the Chargers, and make them this deal… Sign Colin Kaepernick and baring injury, make him start every game for the rest of the season. If he stinks, then everyone will see what most of us already know. If he ends up doing well he can finally have a legitimate claim to why he’s not considered for open QB positions. Either way, this moves the NFL forward from the “Kaepernick is blackballed” nonsense and lets him determine his destiny. What does Pittsburgh get out of this? Two things. 1. A large chunk of cash under the table from the NFL. 2. An extra 3rd round comp pick which they’ll absolutely want because they foolishly gave away their 1st round pick.  CHARGERS If I were Charles Barkley; Chargers -7

Lions at Packers
Believe it or not, the Packers haven’t defeated the Lions since the 2016 season. Aaron Rodgers even started two of those four losses and wasn’t concussed at the end of one of them. I think Green Bay is the best team in the NFC right now, so beating the Packers or even hanging tough will go a long way to determining just how real Matt Patricia’s Lions are this year. It’s also important to note how different Green Bay’s offense is without Davante Adams. Rodgers has little trust in his receivers right now and hasn’t shied away from showing it during games. Randall Cobb was pretty much washed, but with Adams out due to injury Rodgers is clearly missing that rapport right now. PACKERS If I were Charles Barkley; Lions +4