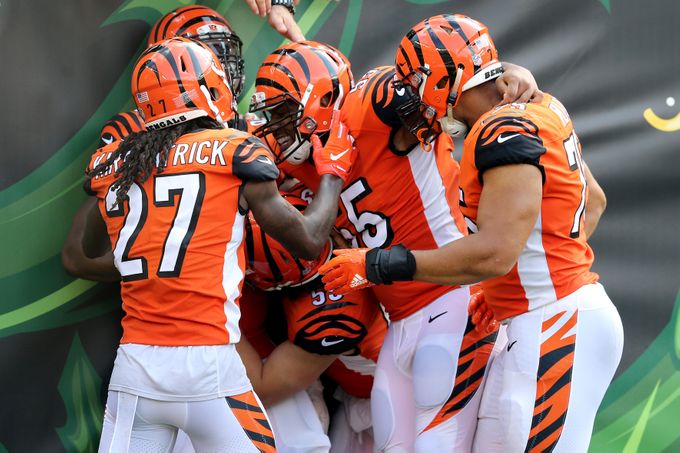 The Bengals offense is rolling into Pittsburgh. Is Cincinnati a legitimate contender in the AFC? (Photo by Kareem Elgazzar, The Cincinnati Enquirer)

My apologies for this week’s picks. I keep falling asleep on the couch, so we’re down to one sentence picks… if that. Actually, let me apologize for last week’s picks, too. Going 5-9-1 against the spread will not pay the mortgage.

Registering to Vote Because Taylor Said So  (Bye Week)

Lions
Don’t sleep on the Lions in the NFC playoff picture. Though they currently sit in the basement of the NFC North, they’re 1-0 in the division and are a bogus pass interference call from 3-2. On the flip side, Detroit’s Week 1 beat down at the hands of the Jets and their zombie performance in Dallas in Week 4 were, uh, bizarre. Who knows what to expect from this team week to week. They’re good, though. If they can find some consistency, they’ll be a sneaky team come the holiday season.

Saints
While not at all intentional, the NFL did New Orleans a solid on the timing of their bye week. The Saints would no doubt come out flat this week after such an emotional performance last Monday. The return of Mark Ingram to that offense cannot be understated.

Eagles 34 at Giants 13
It wasn’t perfect, and the opponent was bad, but the Eagles finally put together 60 straight minutes of reasonably solid football. Baby steps!

Buccaneers at Falcons
Atlanta curled up into a ball and died last week. With how competitive the NFC North is, it’s hard to imagine the NFC South nabbing three playoff spots again. Time for an extended Atlanta win streak to salvage the season. FALCONS If I were Charles Barkley; Falcons -3

Steelers at Bengals
To answer my question from the top of this post… Yes, the Bengals should be considered contenders in the AFC. There is a plethora of talent on that offense at the skill positions and while the Cincinnati defense isn’t great, it’s better than Kansas City’s or New England’s at this point. Being good in October doesn’t mean much, but a win over their division rival Sunday should prove the Bengals will be a handful in January as well. BENGALS If I were Charles Barkley; Bengals -1

Chargers at Browns
Last week against the Ravens the Browns offense combined for 75 yards on its first five drives. On the 6th drive, Cleveland drove 78 yards and scored the games only touchdown. On their next five drives after the touchdown, Cleveland combined for 73 yards. The lesson: Always slow down on rookie QB love. CHARGERS If I were Charles Barkley; Chargers +1

Seahawks at Raiders (In London)
There were only six possessions in the 2nd half of last week’s Raiders/Chargers contest. The Chargers kicked a field goal, scored a touchdown, and ran out the clock on their three possessions, eating up 19 minutes of game clock. Oakland’s defense is really, really bad. SEAHAWKS If I were Charles Barkley; Seahawks -3

Bears at Dolphins
The Dolphins are a better team than getting blown out 38-7 and surrendering a 17-0 lead in less than 10 minutes. Conversely, the Bears are a little overrated. It’s true. DOLPHINS If I were Charles Barkley; Dolphins +4

Cardinals at Vikings
Vikings fans are the best. We beat them by 31 in January and they cry about how Eagles fans are awful people. (It’s true, but we own it.) Then they beat us by 2 in October and pretend all is well. You deserved all the beer thrown at you. VIKINGS If I were Charles Barkley; Vikings -10.5

Colts at Jets
The Jets had four plays go for over 50 yards last week against the Broncos and another three plays go for more than 35. That’s all I have for you. Sorry. COLTS If I were Charles Barkley; Colts +2

Panthers at Redskins
Cam Newton was really bad last week against New York. The Redskins were even worse against the Saints. I want to take the Redskins but Alex Smith is still under center. PANTHERS If I were Charles Barkley; Panthers -1.5

Rams at Broncos
Denver’s offense needs to revolve more around their talented rookie running backs and less around their mediocre free agent quarterback. People like to rave about the Broncos pass rush, but they fell behind big to Sam Darnold and the Jets. I can only imagine the hole Sean McVay will put them in Sunday. Snow in the forecast will be Denver’s only saving grace. Run the ball, Denver. RAMS If I were Charles Barkley; Broncos +7

Jaguars at Cowboys
Half of the time Blake Bortles is worse than Dak Prescott. The other half of the time he’s better. I think Bortles’ roller coaster has a higher upside than trying to win with Prescott’s lackluster play. JAGUARS If I were Charles Barkley; Jaguars -3

Ravens at Titans
Never before have two 3-2 teams been so hard on the eyes. The Final score here could be 3-2. I’m only half joking. TITANS If I were Charles Barkley; Titans +3

Chiefs at Patriots
Patrick Mahomes made some boneheaded decisions last week and they never came back to haunt him. New England’s offense is more capable of making turnovers hurt. I just don’t trust the Patriots defense to bottle up the Chiefs offense. Not even a little. CHIEFS If I were Charles Barkley; Chiefs +3.5

49ers at Packers
The Packers don’t make sense right now. Their franchise quarterback is dragging his dominant leg around the pocket and they refuse to establish any kind of running game despite having capable running backs. Aaron Jones, for example, is the most explosive and talented of the bunch. He ranks 3rd in the NFL in average yards per rush at 6.1. He had 40 yards in the 1st half last week in Detroit and then didn’t get a rushing attempt in the 2nd half because the Packers trailed 24-0. Save Aaron Rodger for December, Mike McCarthy. Run the ball. PACKERS If I were Charles Barkley; Packers -9.5