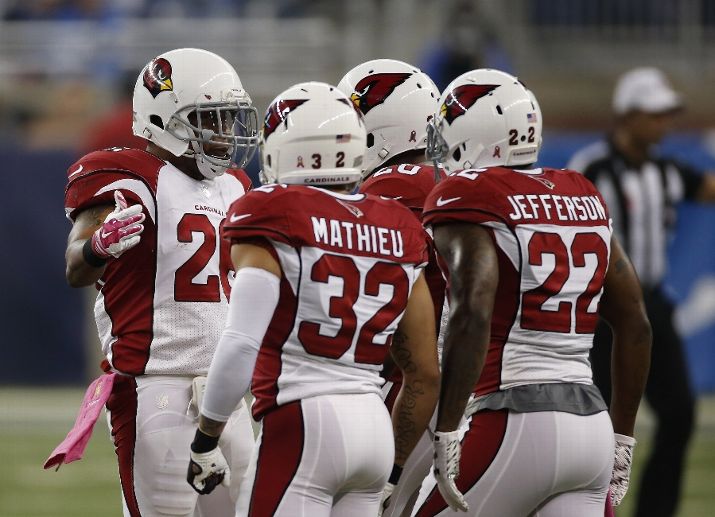 There’s one NFL team just dominating opponents. No, it’s not Tom Brady and the Patriots. (Photo by Gregory Shamus/Getty Images)

Falcons 21 at Saints 31
Thursday’s loss to the Saints exposed the Falcons in a lot of ways. Though Atlanta’s offense has posted impressive numbers through the early portion of the season, they demonstrated last night they are not elite. Atlanta’s offense should have easily won that game. In the 1st half they did as they pleased before fumbling twice inside the red zone. The Falcons should have put up 40 points against the Saints. Instead, they were beat by 10 and posted their lowest scoring output of the season. The offensive line continues to be an issue in pass protection and Matt Ryan, while a fine quarterback, looks as if he’ll never make the jump to that next level where Philip Rivers and Ben Roethlisberger reside. Ryan again committed multiple turnovers and still makes 7-10 throws per game that make you cringe. With the best receiver AND running back in the game right now there’s no excuse for Atlanta’s offense to lose to the NFL’s worst defense.

Redskins at Jets
I know I like to poke fun at how bad the NFC East is, but in reality, the division isn’t all that bad. Dallas’ struggles are a direct result of devastating injuries and early season suspensions. The Giants look like a playoff contender. Even the Eagles show flashes – albeit brief – of a winning football team. Then there’s the Redskins. Washington has proven itself capable this season. Capable of what? I don’t know just yet, but that defense is legit and if DeSean Jackson can ever get back on the field I think Washington could be fighting for a playoff berth. Assuming of course they can hang around .500 until Jackson’s return, whenever that may be. REDSKINS If I were Charles Barkley; Redskins +6

Cardinals at Steelers
The Arizona Cardinals lead the NFL in point differential by a whopping 27 points. That’s right, the Patriots have been crushing opponents by a total of 73 points this season. The Packers and Aaron Rodgers are 5-0 and boast a point differential of 56. Arizona’s is 100. A 100 point differential through five games (including a loss!!) is outrageous. While there’s no disputing their soft schedule, beating teams by 100 points is enough evidence to prove you’re a really good team. CARDINALS If I were Charles Barkley; Cardinals -4

Chiefs at Vikings
I find it hard to believe Andy Reid would be fired after one losing season in three years. Regardless, Kansas City needs a string of wins to save their season. Losing their top back and one of the best offensive players in the NFL certainly won’t help. Neither will Alex Smith’s lousy play. And what happened to Kansas City’s defense? In 2013 they were a top 10 defense (according to Football Outsiders). Last year they dropped to 19. Through five weeks in 2015, the Chiefs sit at 29. Furthermore, In Reid’s first two seasons in Kansas City, his defenses allowed less than 20 points per game. In 2015 the Chiefs are surrendering 28 points per game, good enough for 30th in the NFL. Kansas City can’t lose this week if they have any hope of playing meaningful games in December. VIKINGS If I were Charles Barkley; Chiefs +4

Bengals at Bills
Sammy Watkins should probably think twice before throwing the entire Bills organization under the bus. Putting your quarterback or perhaps the offensive coordinator on blast is one thing, but Watkins went after the entire franchise. Although Watkins was a little too ambitious in his criticism, he’s absolutely right. The Bills don’t give Watkins enough opportunities. I know I’ve said this 100 times, but if you’re not taking a handful of shots downfield every week you’re a fool. NFL rules favor the deep ball. Watkins is one of the league’s premiere athletes. He deserves at least 12 targets every week. It makes absolutely no sense for Watkins to go without a single target as he did in Week 1. Throughout his career Watkins has been targeted 10 or more times only five times. In those games he averages 96 yards and 7 catches. With LeSean McCoy hampered by nagging injuries, Watkins is Buffalo’s best threat. Use him. BILLS If I were Charles Barkley; Bills +3.5

Bears at Lions
I was wrong. The Lions are simply bad. What a turn of events for Detroit since that horrific missed pass interference call in last season’s playoffs. By the time they take the field Sunday, it’ll be 301 days since the Lions last won a football game. Ndamukong Suh left town. Calvin Johnson aged almost overnight. Matthew Stafford has devolved into Ryan Leaf. The list goes on and on. Find some positive momentum, Lions. I’m rooting for you. LIONS If I were Charles Barkley; Lions -3

Broncos at Browns
Josh McCown has thrown for at least 340 yards in his last three outings. This week, he’ll face the NFL’s top defense. Peyton Manning may be struggling but Denver’s defense has been near perfect. They lead the NFL in sacks, turnovers and yards allowed. They’re also 2nd in points allowed and have surrendered only three passing touchdowns all season. Good luck, Josh. BRONCOS If I were Charles Barkley; Broncos -5

Texans at Jaguars
The AFC South has been, and remains the NFL’s worst division. These two teams sit in the AFC South basement. One day the Texans will find a quarterback. One day the Jaguars will be good again. One day. TEXANS If I were Charles Barkley; Texans pick

Dolphins at Titans
Miami’s new coach hasn’t caught a lot of national headlines. His NFL playing career was as a blocking tight end. He’s never been more than a position coach until his recent promotion to interim head coach. But man are there some funny stories pouring out of Miami. According to the Dan LeBatard and Stugotz radio show, Dan Campbell has gone old school. He’s rearranged lockers, the team had a tug of war, and he even resorted to using the Oklahoma drill in his first practice. I don’t know if any of this translates to wins, but it should provide the Dolphins a much-needed kick in the rear. DOLPHINS If I were Charles Barkley; Dolphins +1.5

The Panthers schedule has been nothing but cupcakes and yogurt parfaits. However, I’m not discounting the Panthers as an NFC contender. For starters, they’ve played less than one game with the reigning NFL Defensive Player of the Year on the field. Second, if any quarterback is suited to grind out wins despite a talent-deprived offense, it’s Cam Newton. He’s been doing it his whole career. Though Carolina will suffer its first loss of the season in Seattle, don’t buy into the postgame noise about how Carolina is a product of their schedule. They’re not. They’re better than you think. SEAHAWKS If I were Charles Barkley; Panthers +7.5

Chargers at Packers
I can’t believe I’m saying this, but the Packers are the most boring great team in the NFL this year. I blame Jordy Nelson. His absence has made Randall Cobb’s job harder. Cobb now faces double teams on a regular basis. With Nelson out and Cobb the primary focus of opposing defenses, Rodgers is left throwing to rookies and veteran castoffs. Of course, Rodgers is exceeding and leading the NFL in touchdowns, but the whole offense lacks the flair of years past. PACKERS If I were Charles Barkley; Packers -11

Ravens at 49ers
Do it for Jim, John. Do it for Jim. Also, do it for yourself because your season is already hanging by a thread and you need to string together wins to keep fans invested. For those of you that care, the socks guy from this season of “Hardknocks” was promoted to the active roster this week. You’re right, you don’t care. RAVENS If I were Charles Barkley; Ravens -2

Patriots at Colts
Tom Brady’s left tackle is gone for the year. People in the know are confident the Patriots have the depth to carry on with little impact on Brady and the offense. If that’s the case, expect Brady to be the first NFL quarterback to throw for 10 touchdowns in a game. He may even throw the last two with one hand on the football and the other flipping the bird to the Colts’ executive box. PATRIOTS If I were Charles Barkley; Patriots -10

Giants at Eagles
The Eagles’ win over the Saints last week looks a little better now that the Saints knocked off the undefeated Falcons. However, the thought of Odell Beckham Jr. running circles around Byron Maxwell and the rest of the Eagles secondary gives me nightmares. When the Eagles generate pressure, the defense is fine, but there’s no room for error. That secondary will not bail out the front seven when it doesn’t force Eli Manning into quick decisions. Despite all the draft picks and money Chip Kelly and the Eagles have dumped into that secondary, it remains the team’s greatest weakness, slightly edging out the offensive line. If Sam Bradford offered any consistency I would be confident the Eagles could score with the Giants. Unfortunately, Bradford struggles with consistency from quarter to quarter so it’s hard to imagine him carrying over the success he and the offense had in the final three quarters against New Orleans. I don’t want to be a Debbie downer, but it’ll be hard for the Eagles to climb out of an 0-3 division hole. They need this one badly. GIANTS If I were Charles Barkley; Giants +4