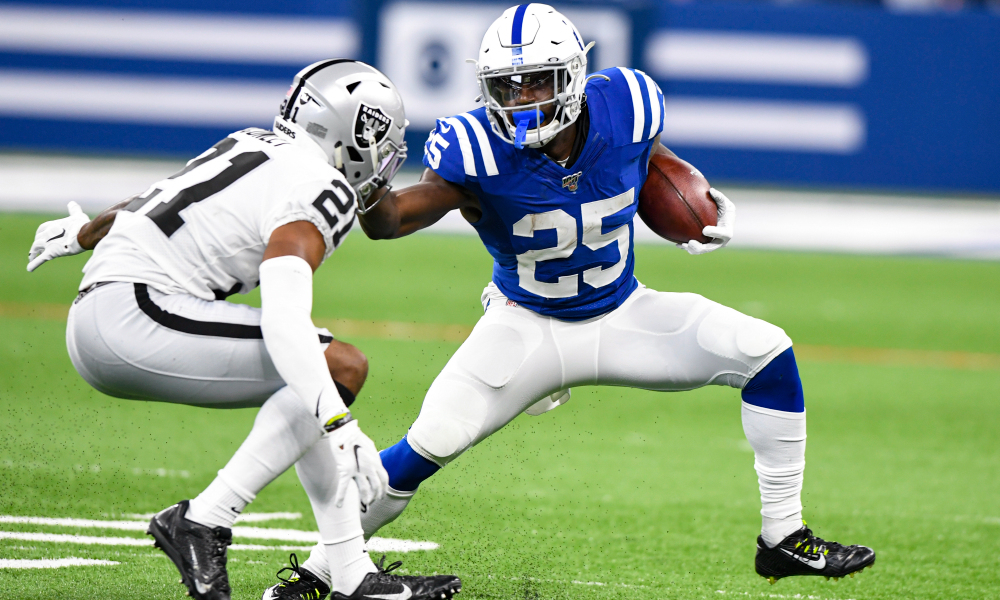 The running game may be a thing of the past, but both the Colts and Cowboys need to find it for success. (Photo by Doug McSchooler, AP)

Week 4 was a disaster for me. I believe it was my worst week ever. As is custom around here after a really bad week, the coin flip has returned. Home teams will be TAILS, away teams HEADS.

Rams 29 at Seahawks 30
That was a polarizing NFC West battle. A lot of individuals are arguing the Rams are still a great team, despite the outcome. Others are saying the Rams are in real trouble. I am neither of those. I’m somewhere in the middle. The Rams have problems, most notably, Jared Goff and the secondary. Goff had his moments last night but man does he throw a bunch of ducks throughout a game. I also thought he made some really poor decisions down the stretch. Those out throws on 1st and 2nd down were a disaster waiting to happen. There was plenty of time for the Rams to work the whole field. Maybe that was another Sean McVay special, but the predictable out throws were a mistake. Finally, did you notice Russell Wilson celebrated what was eventually the game-winning TD before it even reached Chris Carson? Imagine his surprise if Carson actually dropped the pass instead of catching it after a heart stopping bobble?

Lions
The Lions are good. Their record is exactly what it should be through four weeks. Yes, Detroit should have beaten the Chiefs last week but they were also very, very lucky to defeat the Chargers in Week 2. Ball don’t lie.

Dolphins
There were some crazy Josh Rosen stats floating around the interwebs this past week. This was my favorite. Don’t give up on Rosen just yet. He’ll end up on a good team one day and be Carson Palmer.

I apologize for the brevity of this week’s picks. I have too many kids and they always seem to inject me with whatever they bring home from school. One day I’ll feel healthy again. Hopefully.

Cardinals at Bengals
I could not have been more wrong about the Bengals. Last week’s horrific performance against the Steelers hurt me deeply. Coin flip is tails. BENGALS If I were Charles Barkley; Bengals -3

Bills at Titans
Which Marcus Mariota shows up for the Titans? We can probably assume which Josh Allen will show up for the Bills. At this point, there’s only one version of Allen and it’s not often pretty. Heads. BILLS If I were Charles Barkley; Bills +3

Bears at Raiders (London)
Is this the first time they put the London game at the same time as the early games? If so, why? I don’t like it. I know Matt Nagy has backed Mitch Trubisky publicly, but privately he has to be looking around the league at which quarterback he could bring in to mold into his own franchise cornerstone. If I were him, I’d think about Nick Mullens or Josh Rosen. Tails. This is where the coin gag really hurts. RAIDERS If I were Charles Barkley; Raiders +5.5

Buccaneers at Saints
Two weeks ago this looked like a snooze fest between the 1-3 Buccaneers and the Brees-less 1-3 Saints. Instead, New Orleans rallied around its defense and finds itself 2-0 without Brees. Tampa, meanwhile, bludgeoned the Rams on the road and is a field goal miss from 3-1. I don’t enjoy watching Teddy Bridgewater throw the football six yards at time, but I’m all in on this matchup. Heads. BUCCANEERS If I were Charles Barkley; Buccaneers +3

Vikings at Giants
I encouraged Minnesota to ride Dalvin Cook and not Kirk Cousins. That didn’t work out so well last week against a great Chicago defense. However, despite the public discontent from Adam Thielen and Stefon Diggs, the Vikings would be foolish to rely on Cousins to carry the offense. This is nothing against Thielen and Diggs, who are both great, but Cousins just can’t be trusted. It’s his 8th season in the NFL and that formula has yet to work. Tails. Crap. GIANTS If I were Charles Barkley; Giants +5

Ravens at Steelers
I’m not buying the Steelers. That was a gimmick offense on display Monday night. I don’t know if Mason Rudolph is bad or the Steelers are taking it slow with him. That offense won’t work forever, though. You can only throw to running backs so often. Lamar Jackson’s last two weeks look a little too close to playoff Lamar Jackson. I’d be close to panicking if I were a Baltimore fan. Heads. RAVENS If I were Charles Barkley; Ravens -3.5

Patriots at Redskins
Jay Gruden reportedly didn’t want to draft Dwayne Haskins. Three thoughts… 1. It’s hard to blame Gruden. Haskins looks, uh, over his head, to put it nicely. 2. Ironically, Haskins could be Gruden’s only lifeboat. To save his job, Gruden must attach himself to Haskins and beg ownership for one more year of grooming Haskins into the franchise quarterback he doesn’t believe he’ll ever be. 3. Gruden hates his life right now and is just waiting to be fired, right? He probably wanted to quit the moment they forced Haskins on him. He just doesn’t want to give up that money. Tails. Uh oh. REDSKINS If I were Charles Barkley; Redskins +16

Jaguars at Panthers
Kyle Allen is really good at throwing the football. Kyle Allen is not really good at feeling the pocket collapse around him. In two starts, he’s fumbled five times and lost four of them. Amazingly, Carolina has won both games. Toward the end of the Houston game, Carolina had Allen throwing more quickly and avoided him dropping back in the pocket. This is somewhat ironic because the Carolina Panther offense was struggling under Cam Newton because he couldn’t throw deep enough to stretch a defense and use the speed of Carolina’s receivers. If the Panthers don’t trust Allen to hang in the pocket, the offense will find itself in the same pickle, just for a different reason. Tails. (This line is a half point too high. I feel like these teams are the Spiderman meme.) PANTHERS If I were Charles Barkley; Panthers -3.5

Falcons at Texans
Atlanta will be down three scores at some point in this game and then on 4th and short the Falcons will make a ridiculous play call that fails miserably. This will happen at least twice, just as it has in nearly every Atlanta loss this season. Kyle Shanahan ruined this team not once but twice. First, he fell asleep at the wheel in the 4th quarter of Super Bowl LI. Then, he left town for San Francisco. Heads. Noooo. FALCONS If I were Charles Barkley; Falcons +4.5

Broncos at Chargers
Twice this season the Broncos scored a touchdown to take the lead with less than 92 seconds left in the game. Twice this season, Denver was called for questionable roughing the passer penalties on the opponent’s ensuing drive and lost to a field goal as time expired. Sometimes life is hard. The Broncos need to convince Joe Flacco every drive is the last drive of the game and he’s trailing. He’s been great in those situations and not so great outside of them. Tails. (I kind of think the Broncos finally win here. Maybe the coin will save me from myself.) CHARGERS If I were Charles Barkley; Chargers -6.5

Packers at Cowboys
Cowboys fans blaming the refs for last week’s loss is a nice way to ignore that Dallas’ running game is kind of a problem. Of course, any Cowboy fan will tell you they rushed for nearly 450 yards combined against the Redskins and Dolphins. What they won’t tell you is those defenses are ranked 29th (WSH) and 32nd (MIA) against the run. They also won’t tell you that, against average run defenses like the Giants (19th) and Saints (20th), the Cowboys failed to average more than 3.0 yards per rush. Dak Prescott is really good but even he needs a running game. Tails. (I’m ignoring the coin and taking the Packers ATS [against the spread for you innocent folk].) COWBOYS If I were Charles Barkley; Packers +3.5

Colts at Chiefs
While Kansas City’s run defense is a mess, Indy’s Marlon Mack is walking wounded. If TY Hilton can’t go again I don’t see how the Colts have much hope. Maybe they overlooked the Raiders last week. Who knows? I do know the run game has fallen off dramatically the last two weeks and Jacoby Brissett has thrown the ball 83 times the last two weeks as opposed to 55 times the two weeks prior. Frank Reich needs to find that balance again. Brissett is fine but he’s not Andrew Luck. Tails. CHIEFS If I were Charles Barkley; Chiefs -11

Browns at 49ers
If I was wrong about the Bengals last week, I was dead wrong about the Browns. To go on the road and beat down a division rival, as a full touchdown underdog no less, says something about your team. As I just mentioned previously, the Colts and the Cowboys need to find their running game. Well, Cleveland found theirs last week to great success, rushing for nearly 200 yards at 6.7 yards a pop against a defense that hadn’t surrendered that many yards in the three weeks prior… combined. Now I don’t know what to do with the Browns. I had them pinned as a talented team with a bad coach and lacking the necessary grit to win when you’re the team getting all the hype for six months. I was certainly wrong last week. I guess the coin will decide this week. Tails. (Wow. I didn’t expect San Francisco to get that much respect from Vegas. Four points is a big deal, especially with Cleveland coming off that win and the 49ers not owning a win worth bragging about.) 49ERS If I were Charles Barkley; 49ERS -4