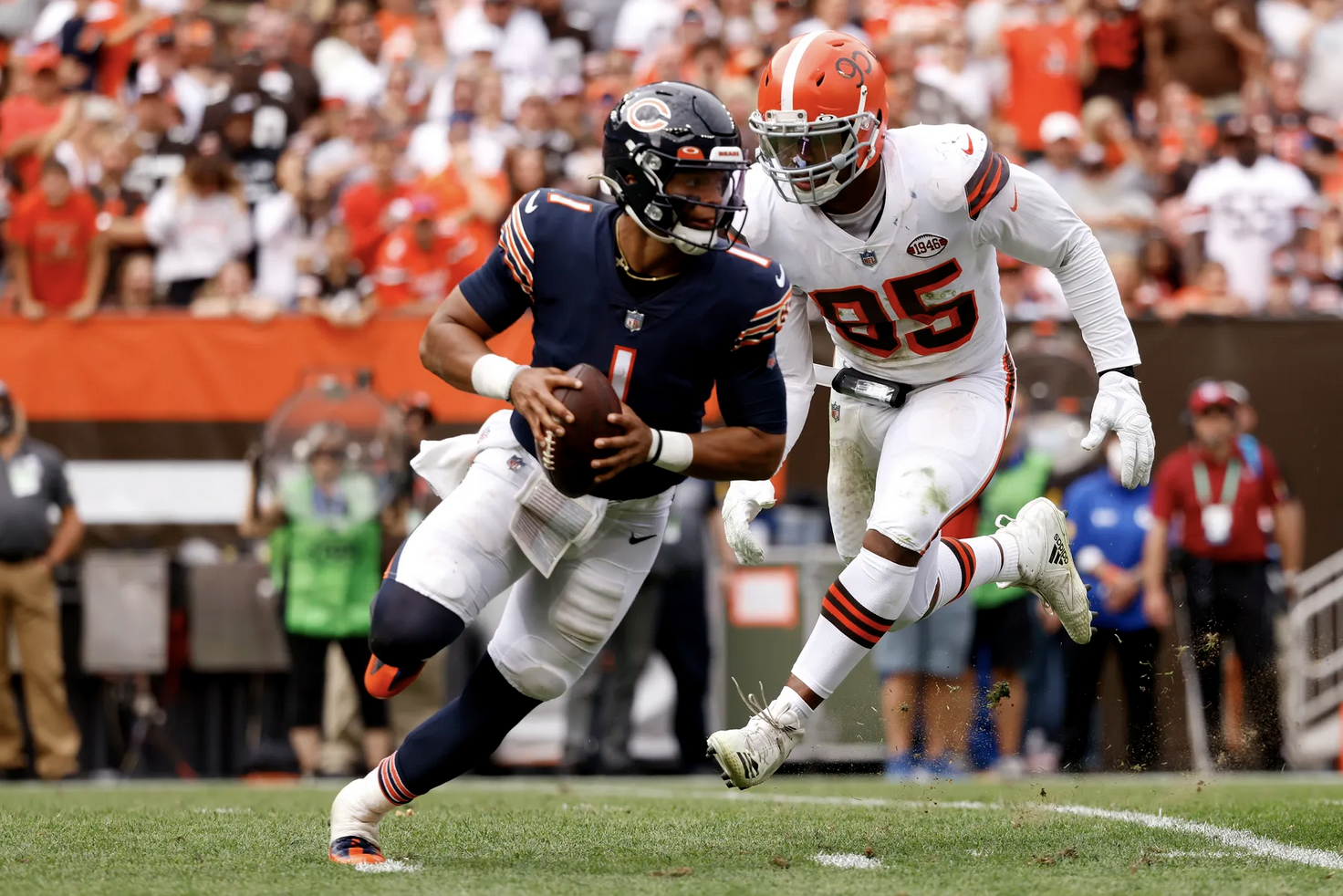 Jaguars 21 at Bengals 24
That was a huge night for Trevor Lawrence. I know the Jaguars didn’t win, and I know Lawrence didn’t throw for 300 yards or anything special. However, he did have his highest completion percentage of the season. Most importantly, he protected the football. Each and every one of Lawrence’s throws was calculated. He threw the football away when there was no good option. If there was a tight space, he put the football where it would be caught by his guy or incomplete. While Cincinnati’s defense certainly isn’t anything to write home about, it’s still important to see Lawrence have a professional game like he did Thursday night. It was the best performance by a rookie QB thus far (which isn’t saying much… but still).

Football Team at Falcons
I would like a one week break from Taylor Heinicke to see what Kyle Allen can do. Heinicke has thrown three interceptions the last two weeks, but anyone that’s watched knows that number would be closer to seven if not for a little luck and NFL defenders having catching disabilities. I’d also like an explanation for the lack of Antonio Gibson touches in the passing game. The guy took his only reception 73 yards and you don’t make any effort to put the ball in his hands again? The Eagles do this with Miles Sanders. It’s stupid. Running backs matter. Give them the football and let them do what they do. Thank me later. FALCONS +1.5

Texans at Bills
Last week some idiot said Josh Allen may be developing a post 2017 Carson Wentz stench to him. That idiot was me. Allen completed nearly 75% of his passes for 350+ yards and four touchdowns. He also ran for another. I got my stenches confused. I apologize to all I hurt. BILLS -17

Lions at Bears
The three starting rookie quarterbacks threw 7 interceptions in Week 3. The good: Fields was not one of them. The bad: Fields only threw for 68 yards. The ugly: Fields completed only 30% of his passes. The ugly, ugly: The Bears had 47 yards of total offense. In a game… With professional athletes… that was 60 minutes long. To recap; Fields did not turn the ball over yet looked way worse than the rookie quarterbacks that did. Matt Nagy must have incriminating photos of someone in Chicago. By the way, I think the Lions may be due for a win here. Before committing, we should consider the 49ers fell asleep at the wheel up 38-10 in Week 1, Detroit no-showed the 2nd half in Green Bay in Week 2, and Baltimore dropped multiple touchdowns and the greatest kicker ever missed a pretty casual 49 yarder (he would later redeem himself) in Week 3. Maybe the Bears offense explodes for 125 yards. I don’t know. I’m taking Dan Campbell’s energy over zombie Nagy. LIONS +3

Panthers at Cowboys
Dallas is really good offensively and the defense is not a mess as most expected. In fact, the Cowboys defense isn’t bad at all. They’re actually good. Through three weeks, Dallas is clearly the class of the NFC East. Barring significant injury or Jalen Hurts turning into Justin Herbert, I think the Cowboys are a playoff lock. They’re just too good. Dak Prescott has been so awesome not even Mike McCarthy can slow him down. (See what I’m doing here?) While the stats suggest Carolina’s defense should be a good test for Dallas, I can’t trust a defense that has faced the Jets, Saints and Texans to hang tough with one of the NFL’s most explosive offenses. COWBOYS -4.5

Colts at Dolphins
Indianapolis owes the Eagles a first round pick if Carson Wentz plays more than 75% of the Colts offensive snaps this season. I think Eagle fans are a bit delusional about this pick right now. There’s no way the Colts allow that pick to be anywhere in the top 10 and probably even the top 12. The AFC South won’t exactly run away from the Colts, but if they are multiple games out come Week 12 or 13 I think they start “resting” Wentz. Best case scenario for the Eagles is the Colts hanging tough and just missing the playoffs, conveying a 1st rounder in the 15 range. COLTS +2

Browns at Vikings
Minnesota has the most balanced offense in the NFL. The Chiefs can’t run the football. Neither can the Rams. Tom Brady was the Buccaneers leading rusher a week ago. The Cardinals barely even try. Las Vegas is averaging 3.4 yards per rush. Buffalo can run the football but often ignore the ground game for reasons I do not always understand. The Cowboys are right there with the Vikings and even lead Minnesota in rushing. However, I, like most anyone else, would take Dalvin Cook and Minnesota’s offensive line over Dallas. VIKINGS +2

Giants at Saints
The Saints defense beat the Patriots Sunday. I’m still not a believer in that New Orleans offense and I think they’re going to need to let Jameis Winston loose at some point and live with the results. As for the Giants… I would really like it if someone would save Saquon Barkley from this mess before his career is a complete waste. SAINTS -7

Titans at Jets
No AJ Brown. No Julio Jones. Still no problem for beating the Jets. I know fantasy football isn’t real life, but when your NFL team doesn’t have a single player starting in any fantasy league worldwide then you have a talent problem. TITANS -6

Chiefs at Eagles
I’m as worried about the Chiefs as I am about Covid, and I’m as worried about Covid as I am about choking on a Tic Tac. Do the Chiefs probably think a little too highly of themselves and waltz through games like they can win whenever they decide to ratchet up the intensity? Yes. Is that a good thing? No. Does it really matter in September? Not really. However, losing to probable AFC playoff teams and division opponents is certainly less than ideal, so at some point the Chiefs must realize their success from previous seasons won’t help them in 2021. The Eagles are a nice cure for what ails the Chiefs. Whatever happens Sunday, I just hope Gardner Minshew is dressed. That’s all I want. CHIEFS -7

Cardinals at Rams
DeAndre Hopkins remains without a 4th quarter target in 2021. His 2nd half targets and production continue to be at… and perhaps even below… James Thrash levels. Let me be clear, I’m not blaming Hopkins. Even on the TV telecast you could see he was open. Kyler Murray just missed him or went elsewhere with his FIRST progression. Which begs the question… shouldn’t Hopkins be the first look on most passing downs? What are we doing here? Sometimes I think football people like to overthink football. Everyone would lose their collective mind if Kevin Durant took zero shots in the 4th quarter and was frozen out by his teammates. I’m not saying that’s what the Cardinals are doing, but it takes a little bit of effort or incompetence to not get the football to the most productive receiver in the NFL since 2017 (Julio Jones is 2nd. Travis Kelce 3rd). Anyway, Kyler Murray is 0-3.5 against the Rams (he sat for most of the final week last season). If the Rams could run the football even a little I would confidently pick them here. Unfortunately, Los Angeles’ 27th ranked rushing attack will likely still struggle to expose the NFL’s 29th rush defense. Sean McVay vs Kliff Kinsbury isn’t really fair, though, so the Rams it is. RAMS -4.5

Seahawks at 49ers
Seattle needs a win. If the Seahawks could maintain their first half performances they would be 3-0. Unfortunately, for Pete Carroll, football is a 60 minute game. Over the last two weeks, Seattle has scored 41 points and racked up 444 yards of offense in the 1st half. In the 2nd half, those numbers have plummeted to only 7 points and 165 yards. In both games the Seahawks were successfully throwing the ball deep downfield and finding chunk plays in the passing game. Those opportunities were either missed by Russell Wilson (again, no coaches film) or eliminated by the opponent in the 2nd half. If the Seahawks can protect Wilson, he should have plenty of opportunities for big plays all game against a hurting San Francisco secondary. SEAHAWKS +3

Ravens at Broncos
The NBA is facing a vaccination crisis. Actually, since 95% of the league is vaccinated there really isn’t a crisis at all, but that’s the world we live in. If you don’t believe what I believe then you are a fool and a danger to MY way of life. Some people don’t live in fear. Some people aren’t interested in a vaccine for a virus with a death rate of 0.0002519 among men younger than 38. Some people don’t want to take a newly developed vaccine from pharmaceutical companies that have been given full immunity from liability courtesy of the US government. The media losing its mind over this ordeal is unbelievably entertaining and laughable. RAVENS -1

Steelers at Packers
If Pittsburgh offered the Eagles a 3rd rounder for Gardner Minshew they’d be a playoff contender immediately. Ben Roethlisberger is hindering this offense even more than expected. It’s been a great career but it’s time to let go. I was relieved (for betting purposes) to see the Packers rally last week, but I also would’ve loved to see Aaron Rodgers’ demeanor this week had the collapse in San Francisco held. Pittsburgh is getting TJ Watt back this week and that Steeler defense stifled Buffalo in Week 1. They’ll do the same to Rodgers Sunday and we’ll get to enjoy the ensuing pout fest. Everybody wins! STEELERS +6.5

Bradys at Belichicks
Not many know this but Tom Brady began his career with the New England Patriots, so this is a low key homecoming. I’m one of the few left outside of the Masshole region that doesn’t hate Brady or the Patriots. While it would be fun to see Brady return and stick it to New England, I think it would be more fun to see Bill Belichick spoil the GOAT’s return. Besides, Brady already won a ring since his departure so he’d have to lose 14 of these for the scales to balance out. BELICHICKS +7

Raiders at Chargers
I’m not anti elusive quarterbacks who can as easily rush for 100 yards as they can throw for 300. I do think the rage is a bit overrated, though. While the NFL standings are going to change a lot between now and January 2022, it’s interesting to note that most of the division leaders right now employ a primarily pocket passer under center. I’d be willing to wager that nine of the 14 playoff teams this winter will have pocket passers at quarterbacks. Running quarterbacks are exciting and explosive, but those offenses generally lack consistency, especially as the season slows down in the winter. Patrick Mahomes is the lone exception and he’s not really a running quarterback anyway. He’s a wizard at eluding pressure and making difficult throws from all angles and contortions. All this is to say that I think Justin Herbert will be the best quarterback in the NFL three years from now. CHARGERS -3