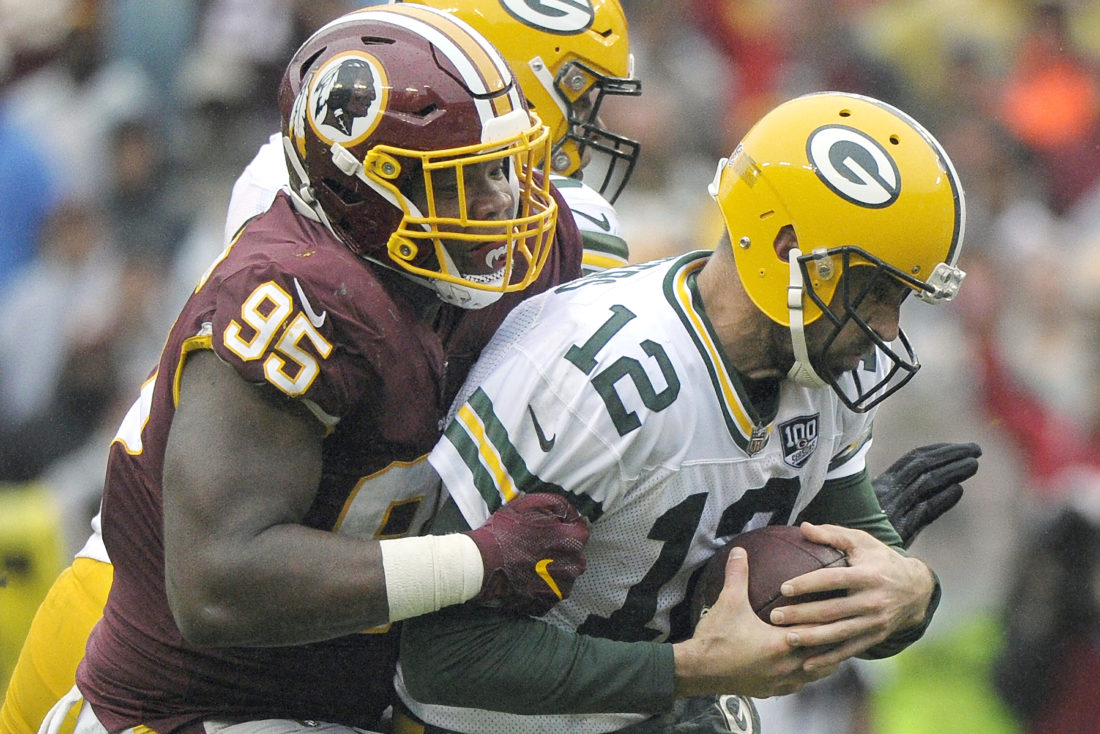 Aaron Rodgers is hurt and the Packers are a wounded animal without him at or near his best. Where do they go from here? (AP Photo/Mark Tenally)

Panthers
Carolina’s offense keeps humming along and will soon add more weapons once Greg Olsen and Curtis Samuel return from injury. Cam Newton will never get the credit he deserves because he’s not a conventional quarterback, but when it’s all said and done he’ll be in the same class as guys like Steve Young, Brett Favre and John Elway. Yup I said it.

Redskins
Washington and Josh Doctson need to figure things out. Through three weeks the former 1st round pick has only 5 catches for 48 yards despite playing over 80% of Washington’s offensive snaps. This was supposed to be the breakout season for the Redskins top pick. It’s not off to a promising start.

Vikings 31 at Rams 38
Kirk Cousins clearly read this here blog two days ago and lit up the LA defense just to make me look like a fool. Well, jokes on you Mr. Cousins. I can look like a fool all by myself.

My favorite note from that offensive clinic Thursday was the Rams converting only 1/3 3rd downs with 7 minutes to go in the 3rd quarter. Why is that worth noting? The Rams already had 28 points, you know, despite only converting one 3rd down. Sean McVay is not a dink and dunker.

Bengals at Falcons
The Bengals had every chance to beat Carolina in Week 3. Three 4th quarter drives showed promise before ultimately going off the rails. Their first drive started with great field position (at their own 41) and a chance to tie the game with a touchdown. The Bengals went three and out. On the next drive, Cincinnati drove to the Carolina 25 before a penalty pushed them back, ultimately leading to a 53 yard field goal that was unsuccessful. They were still only down 7. With a final chance to score and tie the game, Andy Dalton threw an interception. Speaking off offensive struggles, the Falcons had very few in New Orleans last week, especially in the 2nd half. You wouldn’t know this if you didn’t watch, but that Saints/Falcons slugfest that ended in overtime at 43-37 was actually a 13-7 score with less than two minutes to go in the 1st half. The NFC South is wild. FALCONS If I were Charles Barkley; Bengals +3.5

Buccaneers at Bears
I’ve thought a lot about which teams would be in the market for sending a 2nd or 3rd pick away in exchange for a starting quarterback. Obviously, the 49ers come to mind, but what about a team like the Bears? The Khalil Mack signing kind of pushes the Bears into “win now” mode. Mitch Trubisky is clearly not ready to carry that load and may never be capable. He’s also not Matt Nagy’s guy, so moving on from the former top pick isn’t totally outlandish (though it is far-fetched). Anyway, imagine the Bears with a competent passer back there. BEARS If I were Charles Barkley; Bears -3

Lions at Cowboys
Dak Prescott hasn’t thrown for 200+ yards in his last five games. The Cowboys are 2-3 in those games and scored a whopping 59 points. LIONS If I were Charles Barkley; Lions +3

Bills at Packers
Aaron Rodgers is playing with pain. I’m guessing he’s been informed by team doctors that only surgery will heal his knee and said surgery would end his season. I’m not sure there’s any other explanation for why he’s played the last two weeks. Rodgers has performed admirably. Even at 60% he’s better than 70% of the quarterbacks in the league. However, he’s not nearly the same player when hobbled. Though Rodgers still manages to extend plays and move outside the pocket, he can’t drive through his throws like before. So instead of rolling out and launching the football 50 yards downfield, he’s relying completely on his upper body to reach receivers 20-30 yards away. Add injury to the departure of Jordy Nelson (who despite age and dwindling explosiveness was always Rodgers’ security blanket) and it makes some sense why Green Bay has only converted 10 of 27 3rd downs since their 2nd half revival in Week 1. Mike McCarthy has to actually earn his check this week. The Packers may not have a Todd Gurley but Aaron Jones and Jamaal Williams make a formidable tandem. Jones especially is worth riding for a week or two. Last season, Jones rushed 15 or more times in two games. His production did not disappoint. Jones rushed for a total of 256 yards and 2 TD on 36 carries. Relying on a running game won’t be as appealing or explosive as riding the arm of Aaron Rodgers, but it will most certainly aid in whatever healing of Rodgers’ knee can be done without surgery, if any at all. PACKERS If I were Charles Barkley; Bills +9.5

Eagles at Titans
Random note; how are the defending Super Bowl champs only on Monday Night Football once? That can’t be normal. Whatever. The Titans can’t do much offensively but they keep grinding out wins. If Carson Wentz can squeeze out 20 points that should be enough to return home 3-1. EAGLES If I were Charles Barkley; Eagles -3.5

Obviously, the Texans have been playing from behind for most of their 2nd halves this season. However, it’s pretty clear Watson has responded well to a faster paced, spread offense where he’s slinging it all over the field. Let the young guy rip it, Bill. It just may save your job. Oh, before we move on… I don’t understand the Andrew Luck arm controversy. Homie just returned from a 20-month shoulder injury. Why make him chuck the ball 60 yards downfield in a pointless situation? Sure, the game could have swung on a touchdown from the Hail Mary, but it’s a Hail Mary. Doesn’t matter who gets the ball where it needs to be as long as it gets there. TEXANS If I were Charles Barkley; Texans +1

Dolphins at Patriots
If anyone is going to take Miami seriously this season they have to win this game. Sure, it’s only one game, but we all know a loss here would balloon into a 2 or 3 game skid and before we know it… BOOM… Miami is finishing the season 8-8 or 9-7. DOLPHINS If I were Charles Barkley; Dolphins +7

Jets at Jaguars
It’s important (and wise) to judge and rank rookie quarterbacks as quickly as possible. Doing so almost never comes back to haunt you. If I’m a Jets fan, I’d rather have Josh Allen than Sam Darnold. JAGUARS If I were Charles Barkley; Jaguars -7.5

Browns at Raiders
Jordy Nelson was a great receiver. Last week he got chased down from behind twice, and once was by a linebacker. Life comes at you fast in professional sports. Also, two shout outs to Nelson this week. Who could’ve seen that coming? Anyway, the media is having too much fun throwing dirt at Jon Gruden to realize his team isn’t as bad as they want us to believe. In fairness to the media, Gruden did screw up at the goal line in the 1st quarter with a chance to go up 14-0. On 4th and 1 Gruden opted not to run the football with Marshawn Lynch. First Pete Carroll, now Gruden. If you need a yard at the goal line, give it to the scariest guy in the backfield. This isn’t complicated. RAIDERS If I were Charles Barkley; Raiders -3

Seahawks at Cardinals
I’m not sure what reason Cardinal fans had to watch their football team this season other than Josh Rosen. Kudos to the franchise for not making them suffer any longer. The insertion of Rosen into the starting role now leaves only the Cowboys, Jets, 49ers and Colts as teams I absolutely dread re-watching during the week. SEAHAWKS If I were Charles Barkley; Seahawks -3.5

Saints at Giants
Saquon Barkley turning the corner is one of the top five most exciting things in football right now. Watching defenders bounce of his thighs is top three. Barkley wasn’t the main reason for New York’s first victory, though. The Giants victory in Week 3 was the result of Eli Manning having all kinds of time, especially in the 1st half. New York scored on all four of its 1st half drives and totaled 268 yards of offense. Manning was sacked only once. In the 2nd half, the Giants punted on their first four drives and totaled 30 yards (Manning was sacked three times) before finally scoring on their fifth and final drive. SAINTS If I were Charles Barkley; Saints -3.5

49ers at Chargers
The next eight games are where we find out if the Chargers are a playoff team or not. Los Angeles’ two losses have come against the league’s hottest teams out of the gate. Only green pastures lie ahead (at least until December). Over the next eight weeks (nine if you count the bye), the Chargers will face off against opponents with a combined 7-16-1 record. Look at this misdemeanor row; SF, OAK, @CLE, TENN, @SEA, @OAK, DEN, AZ. 4-4 over that span is a disaster for the Chargers. 5-3 is tolerable but only 6-2 or better will put Los Angeles in prime playoff position. CHARGERS If I were Charles Barkley; Chargers -10.5

Ravens at Steelers
I’m sure none of you watched (and who can blame you?), but Baltimore escaped last week with a 13 point victory over Denver that felt like it could’ve swung the other way. Denver already had a blocked field goal returned for a touchdown called back due to penalty. On two consecutive drives in the 4th quarter the Broncos reached the red zone only to have everything go wrong. First, Case Keenum threw an interception. Then, on the ensuing drive, Denver couldn’t gain one yard despite three attempts and turned the ball over on downs. I have no idea what to make of what I’m saying here. I think I’m just trying to prove to you I watched that whole game. RAVENS If I were Charles Barkley; Ravens +3

Chiefs at Broncos
The Kansas City hype is well deserved. Patrick Mahomes is the real deal and good luck finding an offense with more weapons than Andy Reid’s stable of playmakers. On the other hand, that defense is downright atrocious and there’s just no way the offense can maintain this output over a full season. At some point, that defense must be addressed if the Chiefs are to be taken seriously as title contenders. It doesn’t have to be great, just give up less than 30 points per game. 24 is fine. This may also be a good week for the Chiefs defense to gain some confidence. Case Keenum can’t throw downfield. Denver’s offense plays within 15 yards of the line of scrimmage. Unless they find a way to control the clock at a 2/1 ratio, there’s just no way Denver can match scores with Kansas City. The one hope Denver has here is its pass rush. We haven’t seen Mahomes under much pressure. Von Miller and Co. should change that. You can be sure the rest of the league is watching hoping/praying/wishing it slows Reid’s offensive juggernaut. CHIEFS If I were Charles Barkley; Chiefs -5