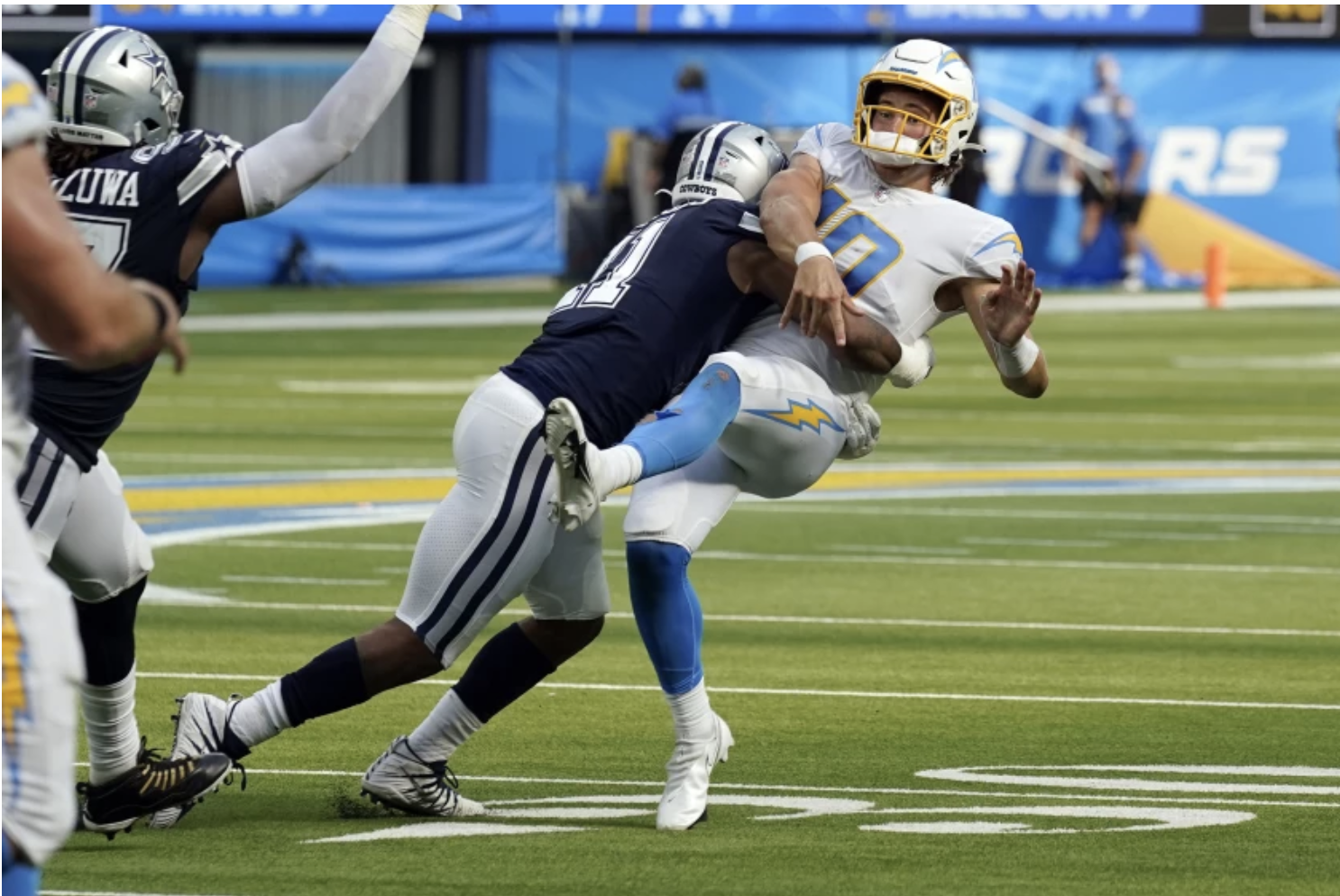 The Chargers offense is cooking, except in the red zone.  (Photo by AP Photo/Gregory Bull)

Football Team at Bills
It is very, very, VERY early, but Josh Allen has some of that Carson Wentz post 2017 smell to him. His accuracy isn’t there, he’s holding the football too long, and the Bills offense is struggling as a result. Again, it’s only been two weeks, but Allen’s completion percentage is down nearly 15 points from his stellar 2020 campaign. BILLS -7

Bears at Browns
Like everyone else, I’m excited for the Justin Fields era to begin in Chicago. However, he did not look ready in relief against the Bengals last week. I’m a simple man, if I had a potential franchise rookie quarterback, I think I would make him sit a season simply because Aaron Rodgers, Tom Brady and Patrick Mahomes all sat before starting. BROWNS -7.5

Ravens at Lions
If NFL defenses have the Ravens figured out, why does Baltimore still run roughshod over opponents? We’ve all seen the Ravens struggle in the postseason the last three years. Do defenses just not scheme as heavily for the regular season? I legitimately do not understand how Baltimore still looks unstoppable with Lamar Jackson after he’s been ousted in the playoffs in relatively easy fashion. It’s not like Baltimore has made any significant changes to their scheme, and Jackson clearly isn’t a more elite passer. Or is the Kansas City defense just that bad? RAVENS -8

Colts at Titans
Too early to know if Carson Wentz will play for the Colts Sunday, but with or without him this is a big game for Indianapolis. A loss would drop them to 0-3 and put the division rival Titans at 2-1 with a head-to-head victory on top of that. Wentz sitting may not be the worst thing for the Colts. Not because Wentz has been bad (I think he’s been pretty good, actually), but because not having Wentz would force the Colts to rely more heavily on their running game, something they’ve struggled to get rolling through the seasons first two weeks. Few mention how great the 2017 Eagles were on the ground. They ranked 3rd in the NFL and only the Saints and Chiefs averaged more yards per rush. Wentz needs a running game. He’s not Patrick Mahomes. This would be an opportune time for the Colts to find theirs. COLTS +5.5

Chargers at Chiefs
The Chargers have a new coach, a stellar young quarterback, an offense with elite talent at the skill positions, and yet they still keep Chargering. Despite being the NFL’s 5th best offense in total yards and 4th in passing yards, the Chargers are only above the offensively challenged Bears, Jaguars, Falcons, Jets and Dolphins when it comes to scoring. You know, the stat that directly correlates to winning football games. Why can’t the Chargers score? Well, their red zone efficiency is 31st in the NFL at 30%. In ten red zone trips they have 3 turnovers. They’ve rushed the football 11 times for only 31 yards. Here’s the worst part; Los Angeles has dropped back to pass 22 times in the red zone for 8 completions, 2 touchdowns, 2 sacks, 2 interceptions and a fumble lost. It would be unfair not to mention Justin Herbert has been victim to two of the strangest calls I’ve ever seen. In Week 1 a pass was knocked out of his hand and through the end zone. Even though his arm was clearly moving forward, it was ruled a fumble. Bizarre. Last week, Herbert, under heavy pressure, threw the ball to avoid a sack. He was hardly being touched when he made the throw. Regardless, the officials ruled him in the grasp for an 18 yard sack. To recap: Chargers red zone offense = bad… and gets no help from officials. (I think Chiefs win but their defense is too bad right now to lay seven points.) CHARGERS +7

Saints at Patriots
There should be an overwhelming number of apology letters arriving at Drew Brees’ doorstep throughout the 2021 NFL season. Too many fans and media folk blamed Brees’ decline for the Saints offensive “struggles” in recent years despite the Saints offense remaining among the league’s better units. Now New Orleans will experience first hand what an offense looks like without a Hall of Famer under center. After a 128 total yard output in Week 2, it’s probably safe to say the Saints won’t be among the league’s best offenses in 2021. PATRIOTS -3

Falcons at Giants
As you can see above, I went 4-12 last weekend. You’re welcome. In my defense, the Falcons (+12.5) trailed 25-28 with 11 minutes left in the game. The Eagles should’ve been up 17-0 instead of 3-0, the Seahawks blew a two touchdown 4th quarter lead, and the Chiefs fell asleep at the wheel in Baltimore. I know you don’t care about my gambling ineptitude but you don’t care about this crummy game either. FALCONS +3

Bengals at Steelers
An injured and washed up Ben Roethlisberger, another round of the underwhelming Mason Rudolph, or a 2nd chance for the disappointing and disastrous Dwayne Haskins? This is essentially where the Steelers find their season, and it’s only Week 3. Of course, it would help if the Steelers could protect their struggling quarterback. Pittsburgh is among the bottom ten in pocket time and 3rd worst in pressure percentage at 32.5%. When the overwhelming strength of your offense is at the receiver position, it doesn’t seem wise to have a compromised quarterback behind a questionable offensive line. But what do I know? STEELERS -3

Cardinals at Jaguars
The Arizona Cardinals know DeAndre Hopkins is a great player, but do they know he’s also likely to be a great player in the 2nd half? Because the stats indicate they may not know. Through two weeks, Hopkins has been targeted 7 times in the 1st quarter. He has 7 catches for 100 yards. Over the next two quarters, he’s been targeted only 5 times for 3 catches and 37 yards. He has zero 4th quarter targets. ZERO. In fact, he only has two 2nd half targets for one reception and ten yards. That’s insane. He’s unquestionably one of the top 3 receivers in the NFL. He’s always open. Get him the football and you won’t have to rely on missed 37 yard field goals to win games. Also, the Cardinals are the worst coached team in the NFL. The penalties they take and brain farts they suffer are elite. So elite in fact I wouldn’t at all be surprised if they found a way to lose to the lowly Jaguars. CARDINALS -8

Jets at Broncos
Someone should show Jets management some clips from David Carr’s career in the NFL. Through two games Zach Wilson is on the Carr career trajectory. Wilson has no time and when he does, he has little idea what he’s doing. I’m not sure benching him now would be the best thing for his confidence, but the Jets need to be extra careful over the next few weeks. Winning games isn’t a realistic goal at this point, so building his confidence and handing him a simple offense he can run without getting killed should be the goal. BRONCOS -10.5

Dolphins at Raiders
It appears as though at some point this season I will have to accept the Raiders are actually good. I’m not there yet. I’m interested to see what Miami’s offense looks like with Jacoby Brissett after a week of practice and not in a relief role. I think they may be better. Brissett is a professional when it comes to managing an offense. Tua Tagovailoa looked overwhelmed too often. If his first or second read wasn’t there everything stopped. Miami has a lot of talent and speed on the outside. I think Brissett will access more of it than Tua. DOLPHINS +3.5

Buccaneers at Rams
I predicted this to be the NFC Championship before the season and after two weeks nothing has convinced me otherwise. Of course, two weeks is a blip on the scale of a season, but I feel the same regardless because the NFC isn’t exactly booming with elite teams right now. While that could very well change, the Buccaneers and Rams are clearly better than the rest. And though I’m no NFL coach, I think it would be wise for Tampa Bay to concentrate their defensive coverages toward Cooper Kupp. Just a hunch. BUCCANEERS -1.5

Seahawks at Vikings
Talking about the playoffs two games into a 17 game season is always a good idea. Call me crazy, but I have a hard time finding seven teams better than Minnesota. That Vikings offense is just too good. So indulge me here… Bucs and Rams are almost locks for the postseason. There’s definitely going to be a second NFC West team. Eliminate the allotted NFC East spot and that leaves three spots left. The NFC North will not be running away from the Vikings as long as Green Bay’s defense can’t pressure the quarterback. Even if Minnesota misses out on the division crown, the other two Wildcard spots are entirely up for grabs. The Panthers have a head start but are they a better team than Minnesota? Ehh maybe. The Saints have 8-9 written all over them. The Cardinals needed a miracle miss to beat the Vikings last week and I can’t imagine the NFC East sneaking a 2nd playoff berth. I’m excited for this paragraph to blow up in my face two months from now. VIKINGS +1.5

Packers at 49ers
Never forget; winning cures all. As I said last week, the Packers are too talented to just struggle all season and not win games. It’s when the friction of a tough game or losing streak creeps up that the cracks will reveal themselves. Sunday won’t be one of those moments. Aaron Rodgers is way too bitter (and talented) to not punish the 49ers (again) for passing on him on draft night way back in 2005. This is his Super Bowl of spite. PACKERS +3

Eagles at Cowboys
I spent enough time detailing my concerns for the Eagles here. One concern not listed is what Dak Prescott and the Dallas passing game will do to the Eagles if they don’t get pressure. Time for Josh Sweat to earn that new paycheck. Ultimately, I think the NFC East will boil down to these teams. The Giants are a mess and Washington’s defense isn’t currently as good as advertised. The Eagles are probably a more balanced team than Dallas, but Jalen Hurts and the offense may not reach the level of Dallas’ offense even on their best days. And after last week who knows how many valleys there will be on this roller coaster of a season for the Philadelphia offense. Regardless, I think the offense should hold its own and at least cover the extra half point against a Dallas defense short on bodies. EAGLES +3.5