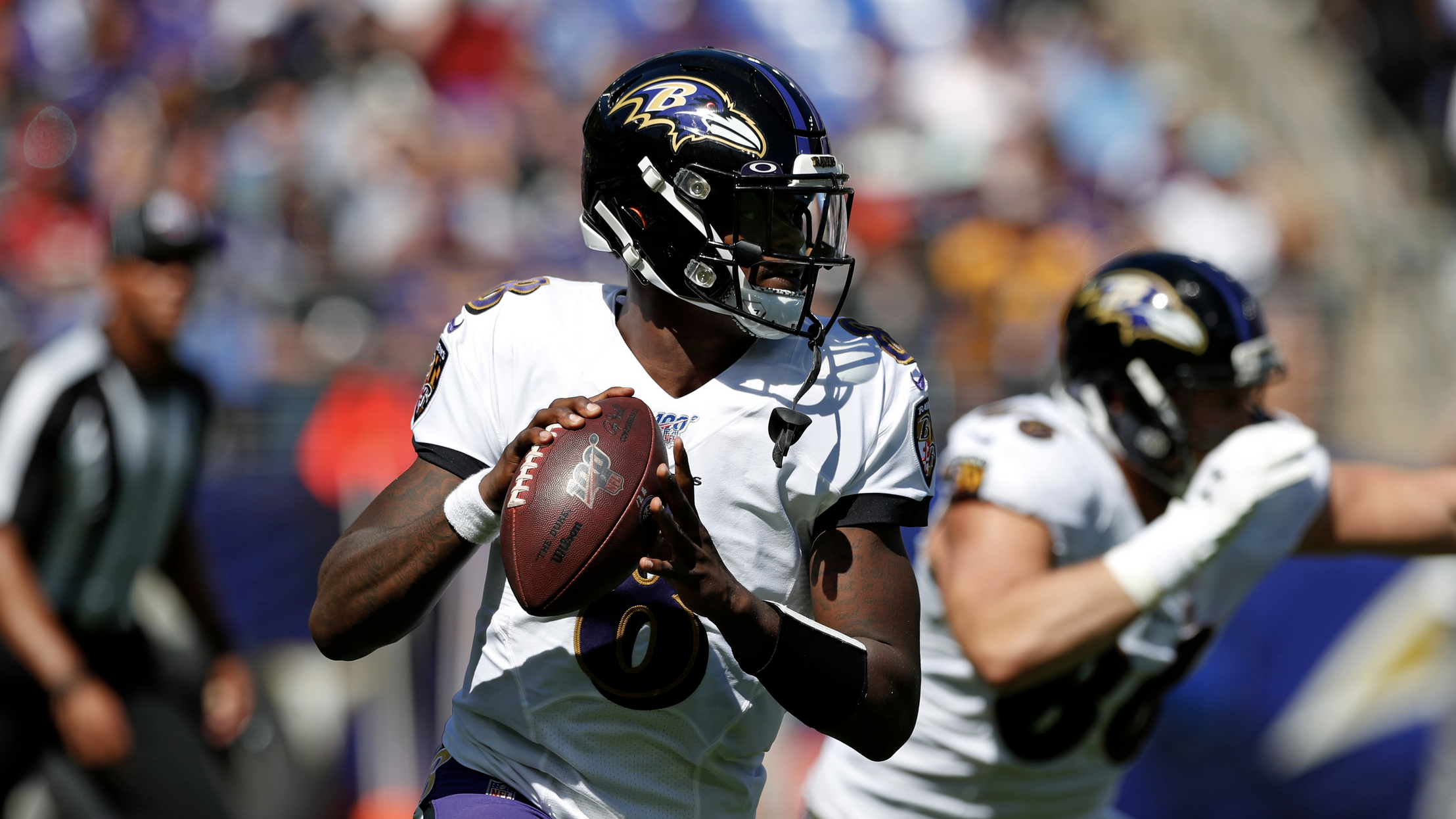 Lamar Jackson takes on Patrick Mahomes, the Eagles have issues, and how the AB saga explains why Colin Kaepernick isn’t in the NFL. (Photo by Todd Olszewski, Getty Images)

Titans 7 at Jaguars 20
The Ryan Tannehill redemption tour is coming. I can feel it. Though Marcus Mariota is still young (he’ll only be 26 next month), I think he’s about to run out of time in Tennessee.

Bengals at Bills
I’m a Zac Taylor believer. Despite an 0-2 start, I like this Bengals team. They won’t win the AFC North or threaten to steal a Wild Card berth, but they’ll be more and more dangerous as the season progresses. If the offense could put together any kind of running game they’d be in much better shape right now. BENGALS If I were Charles Barkley; Bengals +6

Dolphins at Cowboys
A lot of Dallas haters have been hitting the Cowboys with the “look who you’ve played” treatment. While it’s true Dallas hasn’t played anyone good, it’s hard to ignore how well Dak Prescott and that offense has performed. Assuming he lights up Miami as he did the Giants and Redskins, Dak should hold out Monday until he’s paid. COWBOYS If I were Charles Barkley; Dolphins +23.5

Broncos at Packers
Since 2010, every GM in the NFL would accept Aaron Rodgers for whoever his starting quarterback was at that time. Tom Brady and Drew Brees included. How many teams now say no and hang up without hesitation? I got to ten without much thought and that didn’t even include Hall of Famer Gardner Minishew II and the Jacksonville Jaguars. Denver, on the other hand, would absolutely say yes to a deal. The Packers aren’t good yet. Maybe that offense eventually finds its footing but right now they’re icy hot. BRONCOS If I were Charles Barkley; Broncos +7.5

Falcons at Colts
Matt Ryan is either a top five quarterback or a complete mess with absolutely no in between. His red zone interception against the Vikings was the worst interception of the season. Philip Rivers came close to claiming the title last week in Detroit but Ryan’s goof still reigns. I wonder, is it totally fair to blame Ryan for his erratic play the last few seasons? He’s had three offensive coordinators in four seasons and the one he had for two seasons was unanimously dreadful. I don’t want to like the Falcons nearly every week but there’s just so much talent on that offense it’s hard to go the other way. FALCONS If I were Charles Barkley; Falcons +1

Ravens at Chiefs
Patrick Mahomes is a cheat code. I’ve never seen a quarterback hit receivers 45 yards downfield in stride so effortlessly. Needless to say, this is the most enticing game of the week. Lamar Jackson isn’t quite the passer Mahomes is but he’s every bit as electrifying. Also, this is an Andy Reid coaching tree showdown. Reid quietly has the most successful coaching tree of any current head coach, and that includes Mr. Bill Belichick. CHIEFS If I were Charles Barkley; Chiefs -6

Raiders at Vikings
The Vikings are 3-4-1 when Kirk Cousins throws for more than 250 yards. They’re 6-4 when he doesn’t. Is that a useless stat? Probably. But as long as Dalvin Cook remains healthy, Minnesota should revolve the offense around him. VIKINGS If I were Charles Barkley; Vikings -9

Jets at Patriots
The Antonio Brown situation is a mess. The most interesting assessment I read on why he’s still playing is how it relates to gambling. Now that gambling is legal in several states with more coming, the NFL simply can’t bench players based on accusations. Otherwise gamblers could try to impact game outcomes via off the field measures. For example, bettor X places a LARGE sum on the Chargers at +6 against the Chiefs. Bettor X then pays random person Y $10,000 to fabricate an unfortunate claim against Patrick Mahomes. If the NFL sits players before due process (as they have in the past), then Bettor X has a very winnable bet on his hands. Greed is real, cunning and relentless. PATRIOTS If I were Charles Barkley; Patriots -23

Lions at Eagles
Last Sunday night was a roller coaster for Eagle fans. Players were falling apart, Carson Wentz lost his marbles for a quarter, and a 38-13 beat down seemed inevitable. I remember Googling Wentz’s contract to see if there was an “out clause.” It was that bad. Thankfully, and I mean THANKFULLY, Wentz settled in and balled out to the tune of 19/27 for 184 yards and two touchdowns (one rushing) in the 2nd half. It was the gutsiest performance we’ve seen from Wentz since 2017, and more importantly, proof to his team and perhaps even himself that Wentz’s MVP form still exists. Sure, Nelson Agholor dropped the go-ahead touchdown and Zach Ertz cut off his route a yard early, but given the injuries and how poorly the first 2.5 quarters went, Sunday night could’ve gone significantly worse. Moral victories exist in Week 2, right? No? Are you sure?

Okay fine. On the other hand, there are three glaring issues with the Eagles after the first two weeks of the season.

1. Where is this pass rush we heard so much about during the preseason? The pass rush has been so dreadful thus far that Jim Schwartz actually started blitzing. That almost never happens. If the Eagle defense can’t generate pressure from its base defense, the secondary will be sitting ducks again, just as they were for most of 2018.

2. I thought the Eagles running back situation was supposed to be a strength in 2019? The line currently generates little push and Mile Sanders is too in love with bouncing everything outside. With their top two receivers sidelined, the offense needs a potent ground game.

3. These slow starts are the worst. I blame Doug Pederson for most of it. Two weeks in a row it’s taken an entire half for the offense and Wentz to find some kind of rhythm. Is it just me or does Wentz perform significantly better when he’s NOT throwing those two yard dump offs and bubble screens that Pederson loves to call throughout the opening half? EAGLES If I were Charles Barkley; Eagles -6

Panthers at Cardinals
I’m a ride or die Cam Newton fan. Apparently the die portion of that equation is happening a lot sooner than expected. When he couldn’t beat a Tampa Bay linebacker one-on-one on 4th and 1 early in Carolina’s loss to the Buccaneers last week I knew bad times had arrived. Sure, maybe he’s injured (again), but Cam hasn’t been a dynamic player since the end of the 2017 season. At some point injuries just become part of who a player is and less about a stage he’s working through. Maybe Cam sits for a month and comes back truly healthy. Maybe something close to 2015 MVP Cam is still in there, like the Cam we saw in 2017. Or, maybe Cam is done. Man that would be a bummer. PANTHERS If I were Charles Barkley; Panthers +2

Giants at Buccaneers
Given the brief career span of an NFL running back and the overall ineptitude of the Giants, how much longer do we have until Saquon Barkley asks out of New York? I don’t really expect that to happen but this player demanding trade stuff is nonsense. It’s one thing to ask for a new contract. Quitting on your team is entirely different. Anyway, I don’t know why this game is on at 4pm but I’m thankful it is. Checking in on Daniel Jones will be a lot easier. BUCCANEERS If I were Charles Barkley; Buccaneers -6

Texans at Chargers
Both of these 1-1 teams could just as easily be 2-0 or 0-2. The Texans should’ve left New Orleans with a win in Week 1 but flopped in the final seconds. Last week they could’ve lost to Jacksonville if Leonard Fournette’s arms were two inches longer. The Chargers won in Week 1 because Adam Vinatieri malfunctioned and then fell to the Lions in Week 2 because their own replacement kicker couldn’t find that money spot between the uprights. These are two good teams, though. I expect both to be in the postseason due to how good they are and how weak the AFC is in general. Outside of Ravens/Chiefs, this is the best matchup of the weekend. I don’t understand why CBS is making the Saints/Seattle matchup its premiere game over this one. CHARGERS If I were Charles Barkley; Chargers -3

Steelers at 49ers
Anyone who watched the Steelers last week after Ben Roethlisberger went down could see the team believes in Mason Rudolph. It’s often premature to declare a season on the line in Week 3, but this feels as close to a must-win game for Pittsburgh as you can have before October. The 49ers are good, but desperation wins out here. STEELERS If I were Charles Barkley; Steelers +7

Saints at Seahawks
I think Bill Simmons said it on his podcast that Taysom Hill would be a lot scarier under center than Teddy Bridgewater. I agree. I never understood why Sean Payton kept taking red zone snaps from Drew Brees and giving them to Hill, but now would be the appropriate time to give all the snaps to Hill. My guess is Payton has Bridgewater on a short leash and deep down inside wants to run a wonky offense with Hill under center. As for Seattle, they tried so, so hard to start the season 0-2. They sputtered to an unimpressive win over the Bengals in Week 1 and literally fumbled their way to another victory in Pittsburgh. The Seahawks are good while also being a mess. I can’t wait to see how they back into another victory this week. SEAHAWKS If I were Charles Barkley; Seahawks -4.5

Rams at Browns
Cleveland beat a third string QB in Week 2 after getting destroyed by a team in Week 1 that just lost to a backup QB Thursday night. Everyone already believes the Browns aren’t as good as expected, but I think it’s possible Cleveland just isn’t any good. Like, at all. More Nick Chubb and less Baker Mayfield is the recipe for a successful Cleveland season but I don’t trust Freddie Kitchens as the chef. RAMS If I were Charles Barkley; Rams -3.5

Bears at Redskins
Since both of these quarterbacks stink, let’s talk about another quarterback that stinks; Colin Kaepernick. The Antonio Brown saga is a perfect example of the real reason Kaepernick isn’t in the league. Brown skipped practices, threatened to retire, was confrontational with his bosses, demanded to be released and has a plethora of ongoing off field concerns. And still teams (yes, multiple teams) wanted to roll the dice on him. Why? Above all else, talent wins in the NFL. If Patrick Mahomes took a knee during the national anthem this week, would the Chiefs cut him? No. Talent outweighs distractions. The problem with Kaepernick is the talent isn’t there. He’s a middling NFL quarterback, capable of being a stop-gap but little else. These are facts. I know the Kaepernick crowd loves to cry foul, but he simply isn’t any good anymore. Talent is a lifeboat. When that lifeboat starts losing air, the end is near. Distraction cannot outweigh talent. When that happens you’re left on the curb, just as Chad Johnson, Terrell Owens and Greg Hardy learned. BEARS If I were Charles Barkley; Redskins +4