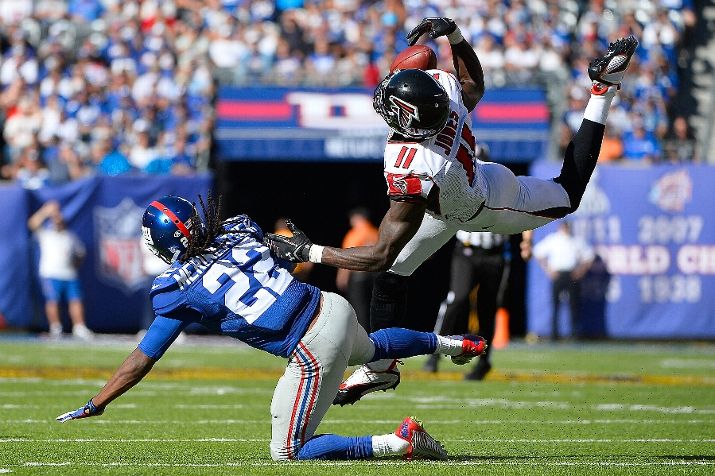 Julio Jones takes his dominance to Dallas to take on the depleted Cowboys. (Photo by Alex Goodlett/Getty Images)

Redskins 21 at Giants 32
Kirk Cousins continues to struggle as a starting quarterback. Someone on Twitter mentioned that Cousins has already reached Robert Griffin III’s career interception total… but in 600 less attempts. Also, that game was miserably boring.

Falcons at Cowboys
This line seems way too low to me. Either everyone else is wrong or I’m missing something. It’s probably the latter. Oh well. FALCONS If I were Charles Barkley; Falcons -1.5

Colts at Titans
Naturally, fans and the media alike have been fleeing the Colts bandwagon like it’s on fire. I’ve heard Andrew Luck and “bust” in the same sentence this week. I’ve heard how the Colts need to blow it up and start over around Luck. How about this? The Colts live in the AFC South. They’ll make the playoffs. They’ll be fine. We love overreacting without taking into account the circumstances. Indianapolis has a bad offensive line and the Jets and Bills get after the quarterback better than just about everyone else in the NFL. Is Luck overrated? Yes, slightly, but he hasn’t forgotten how to play the position after two games. He’ll be fine. The Colts will be fine. These are the spoils of being in the AFC South. COLTS If I were Charles Barkley; Colts -3.5

Raiders at Browns
Despite a solid performance in Week 2, Johnny Football is back to being Johnny Benched. I must admit, I find myself rooting for the much-maligned underdog. Perhaps a loss to the Raiders will get him back on the field. RAIDERS If I were Charles Barkley; Raiders +3.5

Bengals at Ravens
It’s been a tough start for the Baltimore Ravens and it’s not getting any easier. After hosting a tough AFC North rival in the Bengals, Baltimore will travel to the hated divisional rival Steelers on a short week. That’s two games against divisional rivals in five days. That’s just unfair. If the Ravens can’t get their act together, their season could be over before Columbus Day. RAVENS If I were Charles Barkley; Ravens -3

Jaguars at Patriots
The Patriots had the NFL’s bogus investigation fueling their fire in Week 1. In Week 2 Rex Ryan fanned those flames with foolish trash talk. The Jaguars offer nothing in the way of added motivation. New England will win but I’m expecting their worst performance of the season thus far. PATRIOTS If I were Charles Barkley; Jaguars +14

Saints at Panthers
We still don’t know Drew Brees’ status for Sunday but I doubt it’ll change the outcome. The Panthers have quietly become the NFL’s grinders. It’s often ugly and unpleasant, but Cam Newton and the offense muster 3-4 solid drives a game and the defense makes what limited points the offense provides stand up. It’s old school football similar to what the Eagles did with a young Donovan McNabb in the early 2000s. It’s hard on the eyes at times, but I kind of like it in a nostalgic kind of way. PANTHERS If I were Charles Barkley; No Line Yet

Eagles at Jets
I keep searching for a logical reason the Eagles could win. Here’s what I’ve come up with. 1. Ryan Fitzpatrick. That’s it. That’s the list. The Jets pass rush is better than any the Eagles have met thus far. The same is true for the secondary. Offensively, the Jets are more challenged than the Falcons or Cowboys but with Byron Maxwell on the field, James Thrash could have had a Pro Bowl season. JETS If I were Charles Barkley; Jets -2

Buccaneers at Texans
I wonder what it must be like for Bill O’Brien to coach Ryan Mallett and Brian Hoyer after working with Tom Brady for so many years? I mean, that has to be ultimate frustration, no? Mallett chucked the football 56 times last week. He completed less than half his passes and failed to crack 250 yards. That’s an amazing feat. This week he’s going to be without the Texans top receiver, DeAndre Hopkins. Arian Foster can’t return soon enough. TEXANS If I were Charles Barkley; Buccaneers +6.5

Chargers at Vikings
I meant to record the Chargers/Bengals game last weekend and accidentally recorded the Titans/Browns instead. Which wasn’t the worst thing possible because it was fun to watch Johnny Manziel look competent, but now I’m completely in the dark about the Chargers. Here’s to blindly trusting Philip Rivers. CHARGERS If I were Charles Barkley; Chargers +2.5

Steelers at Rams
I was confident about the Rams entering the season. Then they beat the Seahawks and I felt even better. Then last week’s debacle against the lowly Redskins happened and now I’m reeling. There’s no way St. Louis can hang with Pittsburgh’s offense, so the Rams pass rush must be relentless and impactful. Given how poorly the front seven performed in Washington, I’m not holding my breath. STEELERS If I were Charles Barkley; Steelers -1.5

49ers at Cardinals
Ron Jaworski said as long as Carson Palmer is healthy the Arizona Cardinals will remain Super Bowl contenders. Hmm. I hadn’t heard that take from anyone else. I’m not even sure Jaworski’s wrong there because of how weak the NFC has looked through two weeks. However, at some point the Cardinals will need a more threatening ground game to prevent defenses from teeing off on Palmer. Too many hits on Palmer means Arizona will wake up to Drew Stanton under center and their season lost. CARDINALS If I were Charles Barkley; 49ers +7

Bills at Dolphins
Week 3 outcomes won’t determine the success or failure of any team’s season. However, the loser of this one will certainly be labeled a fraud until they prove otherwise. Both defenses have underperformed through two weeks. While neither offense has been awful, many expected more from the Dolphins, especially in the run game where Miami currently ranks 30th in the league. I’m taking the Bills but I don’t feel great about it. BILLS If I were Charles Barkley; Bills +3

Bears at Seahawks
Kam Chancellor is back. Jay Cutler most likely will be out. The Seahawks are 0-2 and playing at home for the first time this season. Jimmy Clausen will be starting under center for the Bears. Jimmy Graham is “pissed” about his role in the offense. This has massacre written all over it. SEAHAWKS If I were Charles Barkley; Seahawks -14.5

Broncos at Lions
I can’t take much more of Peyton Manning ducks wobbling through the air. It’s depressing. It’s like watching an animal dragging around a broken leg. The good news for Denver is Detroit is surrendering nearly 4 yards per rush to opposing offenses. The Bad news is Denver only musters 2.8 yards per rush. Something has to give Sunday night. For the sake of Manning’s health and ultimately, Denver’s season, let’s hope CJ Anderson finds some open running lanes. BRONCOS If I were Charles Barkley; Broncos -3

Chiefs at Packers
I actually think the Chiefs can do some damage on the ground against the Packers. Matt Forte put out the blue print in Week 1. On the other hand, it’s nearly impossible to find a legitimate reason to pick against Aaron Rodgers. Even without Kam Chancellor, the Seahawks still had one of the NFL’s premiere secondaries and Rodgers had little problem dicing them up. If the Chiefs can get after Rodgers like they did in the 1st quarter against Peyton Manning, Kansas City might have a shot. A shot – that’s about all you can ask when facing off against Rodgers. PACKERS If I were Charles Barkley; Chiefs +7