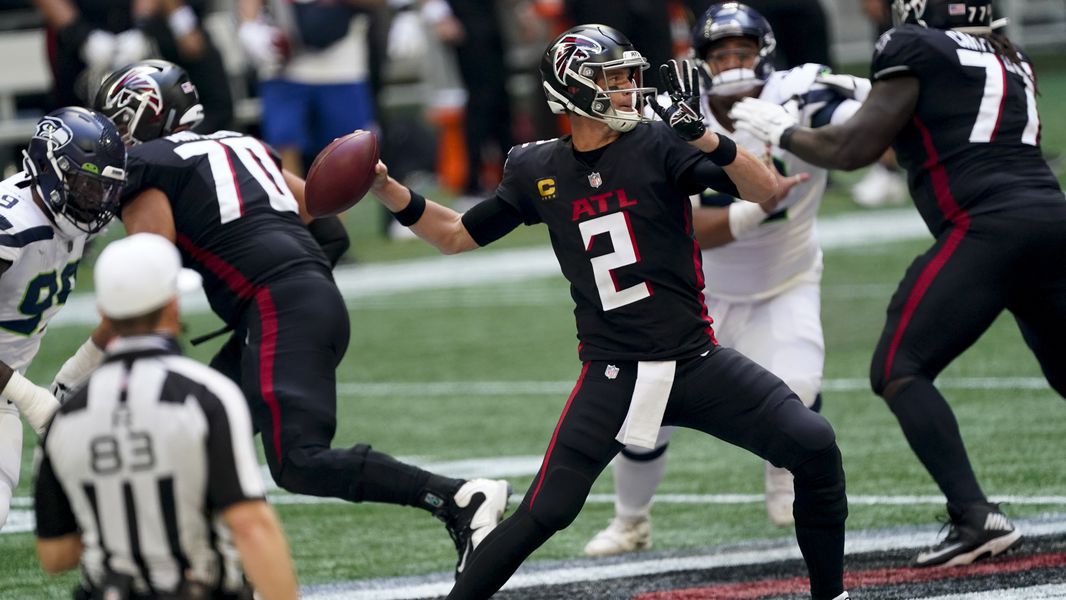 Matt Ryan and the Falcons are one of several preseason playoff contenders hoping to avoid the dreaded 0-2 start.  (Photo by John Bazemore)

Bengals 30 at Browns 35
A much-needed win for the Browns, and especially Baker Mayfield. Outside of one bad interception, Mayfield played one of his best games as a pro. He was decisive, active and accurate. Cleveland also stayed committed to the ground game, which has proven a critical ingredient in their recipe for success. When they forget about Nick Chubb, the result is often bad. As for Joe Burrow slinging it 60 times… I’m all for rookie quarterbacks getting as many reps as possible early in their careers as long as they’re not in danger a la David Carr. Last night flirted with that danger zone for Burrow and the Bengals. The reps aren’t worth it if he’s taking a dozen or so hits a night. Cincinnati must get their running game right or they’ll risk Burrow breaking down before December.

Giants at Bears
Saquon Barkley is too good to finish a football game with an average yards per carry of 0.4. I’m not even blaming Barkley. He was met before the line scrimmage by at least two Steelers on nearly every rush. I know Jason Garrett doesn’t have the same quality offensive line he had in Dallas, but he has to free up Barkley or he’ll be out of a job and the Giants won’t win more than 4 games. Despite the Barkley struggles, I thought the Giants offense flashed some of their potential Monday night. It’ll be interesting to see what they can do against a lesser defense. Unfortunately, the Giants won’t face a bad defense until Week 5. BEARS If I were Charles Barkley; Giants +5.5

Lions at Packers
Don’t be fooled by the final score last week. The Packers trounced the Vikings. Green Bay had 9 possessions (not counting the final kneel down possession). Six of those drives went for 60 yards or more. Only two of them resulted in no points, and one of those two was a failed 4th down attempt inside the Minnesota three-yard line. The Packers threw for over 350 yards and rushed for more than 150 against what was supposed to be one of the conference’s tougher defenses. Baltimore and Kansas City looked great in blowout victories, but the Packers victory was the most impressive of Week 1. PACKERS If I were Charles Barkley; Packers -6.5

Falcons at Cowboys
Atlanta’s loss to Seattle last week also featured a misleading scoreboard. It was a back and forth affair as both offenses seemed unstoppable at times… except on 4th down. That’s where the Falcons lost the game. They went 0-4. Three of the four failures accord inside Seattle territory. The one that didn’t was a fake punt attempt that would have been successful had the ball carrier not fumbled. What’s worse, Seattle scored on every ensuing drive after the turnover on downs. This isn’t a criticism of Dan Quinn being aggressive. I thought the right call each time was to go for it. Sometimes life is unfair. As for Dallas, I don’t know whether to give them credit for hanging tough against a good Rams team or criticize them for falling flat offensively in the 2nd half. I expect the Dak Prescott and the Cowboys offense to bounce back this week but the Atlanta offense looked potent in Week 1. Hopefully this is one of those games where whoever has the ball last wins. FALCONS If I were Charles Barkley; Falcons +4.5

Jaguars at Titans
Winning despite missing three field goals and an extra point must feel amazing. I must say, Ryan Tannehill looked good Monday night. I was skeptical when he got the big contract in the offseason, but Tennessee moved the ball almost at will against a very good Denver defense. TITANS If I were Charles Barkley; Titans -7.5

Vikings at Colts
Both were favorites to win their respective divisions heading into the season and both suffered discouraging losses. The Packers pummeled Minnesota. Only a three touchdown rally in the 4th quarter made the score respectable. Indianapolis – the biggest favorite of the weekend – lost to what many believe is the worst team in the NFL. Both teams need more from their starting QB. Philip Rivers did the Philip Rivers thing where he plays well and then throws devastating interceptions. Kirk Cousins did his thing where he no-shows until the game is out of reach. I love Frank Reich but I didn’t understand throwing the football 46 times. The Colts backfield was all the rage over the summer. Throwing the football at a 2:1 ratio in a game they never trailed until mid 4th quarter was a head-scratcher. VIKINGS If I were Charles Barkley; Vikings +3

Bills at Dolphins
The extra playoff spot in 2020 will be an interesting subplot in Miami. Do they let Ryan Fitzpatrick continue to captain the ship if he struggles like he did Sunday, or do they pull the string and go to Tua Tagovailoa? BILLS If I were Charles Barkley; Bills -6

49ers at Jets
Week 1 was a bit of a disaster for the 49ers. George Kittle sprained his knee. Richard Sherman is out with a calf injury for at least a few weeks. Jimmy G was again, blah. Arizona beat the 49ers because they won on 3rd down and in the red zone. The Cardinals were 7/14 on 3rd while the 49ers struggled to convert only 2/11 3rd downs. In the red zone, Kyler Murray and the Cardinals scored touchdowns on both trips. San Francisco only score one touchdown on four trips inside the Arizona 20. Even worse, they failed to score at all on two of those trips. The season is obviously young, but San Francisco must take advantage of a gimme against the Jets or the wheels may start falling off. 49ERS If I were Charles Barkley; 49ers -7

Rams at Eagles
Aaron Donald was throwing Dallas offensive lineman around like I throw my three old on the couch. The Eagles offensive line surrendered 8 sacks and 14 QB hits in Week 1. This is a match made in heaven for the Rams and hell for the Eagles. Sundays victory over the Cowboys felt like a complete domination by the Rams but the scoreboard reflected a tighter game in which a questionable pass interference call was needed to secure the victory. Why? The Rams offense bogged down inside the red zone (2/5) and completely disappeared midway through the 3rd quarter. I still don’t think Jared Goff is all that good. EAGLES If I were Charles Barkley; Eagles +1

Broncos at Steelers
Since Jason Garrett lost his job and Bill O’Brien lost on Thursday, Vic Fangio stepped up to be the coaching whipping boy of Week 1. Going into the locker room with two timeouts after running out of time was a bold strategy that unfortunately didn’t work out. Denver showed flashes on offense but struggled mightily late in the 2nd half. I’m going to chalk that up to being without Courtland Sutton and the sudden loss of Philip Lindsay. On the other hand, Drew Lock and that offense had a very Pat Shurmur constipation stench to them. It would be a shame if Shurmur neutered that offense with all that talent and speed on the outside. STEELERS If I were Charles Barkley; Broncos +7.5

Panthers at Buccaneers
The Panthers are going to terrorize a lot of people this season. For starters, that offense will give opposing defenses headaches. There’s so much elusive talent there that it doesn’t really matter if Teddy Bridgewater doesn’t throw more than 20 yards downfield. If they get the football in space, guys like DJ Moore, Christian McCaffrey and Robbie Anderson can hit home runs at any time. The other people Carolina will terrorize this year will be their own fans because woof is that defense bad. I know there are a lot of new faces, loss of their leader, and learning a new scheme, but Derek Carr had a picnic in the backfield. I don’t think giving Tom Brady time is the best approach to winning football. BUCCANEERS If I were Charles Barkley; Panthers +8.5

Football Team at Cardinals
Bill O’Brien and the Texans lost Thursday night and suffered another “L” Sunday afternoon as DeAndre Hopkins destroyed the San Francisco defense. A couple of questions; First, why trade an elite receiver under age 30? Second, why didn’t Houston want to pay him? 3. Deshaun Watson is probably better than Kyler Murray, so why didn’t O’Brien target Watkins 20 times a game? The Eagles offense left a lot of plays on the field against a suspect Washington secondary in Week 1. Arizona should have its way. CARDINALS If I were Charles Barkley; Cardinals -7

Chiefs at Chargers
It’s inevitable Anthony Lynn loses his job at some point this season. He’s already lost his all-pro safety. Now his Pro Bowl center is lost for the year, too. Last week I compared the Chargers to the 2017 Buffalo Bills. They proved as much in Week 1 with their defense holding the line and their offense struggling its way to 16 points. I don’t care how good your defense is, 16 points won’t beat Patrick Mahomes and the Chiefs. At some point, Lynn may have to go to Justin Herbert as a last ditch effort to save his offense and, gulp, his job. CHIEFS If I were Charles Barkley; Chiefs -9

Ravens at Texans
I don’t at all question taking guaranteed money when you can get it, especially in a game like football. However, Deshaun Watson must be wondering what the next 4+ seasons are going to look like down in Houston. He does have the very real possibility of Bill O’Brien getting fired in the near future working in his favor, but until then he’s relying on the oft-inured Will Fuller and the fading career of Brandin Cooks. Ten months ago, Baltimore sacked Watson 7 times and won by 34 points. A similar outcome seems about right. RAVENS If I were Charles Barkley; Ravens -7

Patriots at Seahawks
Cam Newton is at his best when he’s using his legs to keep defenses on their toes. The cost of such potency throughout Newton’s career has been injury. New England is in the advantageous position of having no long-term skin in the game. They can run Cam into opposing linebackers for as long as he’ll hold up without worrying about long-term impact on their investment. Some media folk have offered that the Patriots may ink Cam to a multiyear deal. I don’t see it. Bill Belichick is too cutthroat to 1. Change the way he uses Cam and thus 2. Give big money to a QB who has proven his body can’t handle the banging. SEAHAWKS If I were Charles Barkley; Patriots +4

Saints at Raiders
I kept meaning to look into why the Raiders ignored Henry Ruggs III in the 2nd half of their victory over Carolina. The All-22 just got released today, so maybe there will be answers there. Until then, I was impressed at his speed. He looks like he’s jogging and is still flying past defensive backs. I know Gruden shocked some when he drafted Ruggs over Lamb, Jeudy, etc…, but I was most impressed by Ruggs after one week of action. The future of the Raiders offense is intriguing. Josh Jacobs is a three down stud, Ruggs and Bryan Edwards should make an imposing receiver duo for years to come, and Darren Waller is one of the best pass-catching tight ends in the game. The only question for Gruden and the Raiders… is Derek Carr good enough to take the offense to the next level? SAINTS If I were Charles Barkley; Saints -5.5