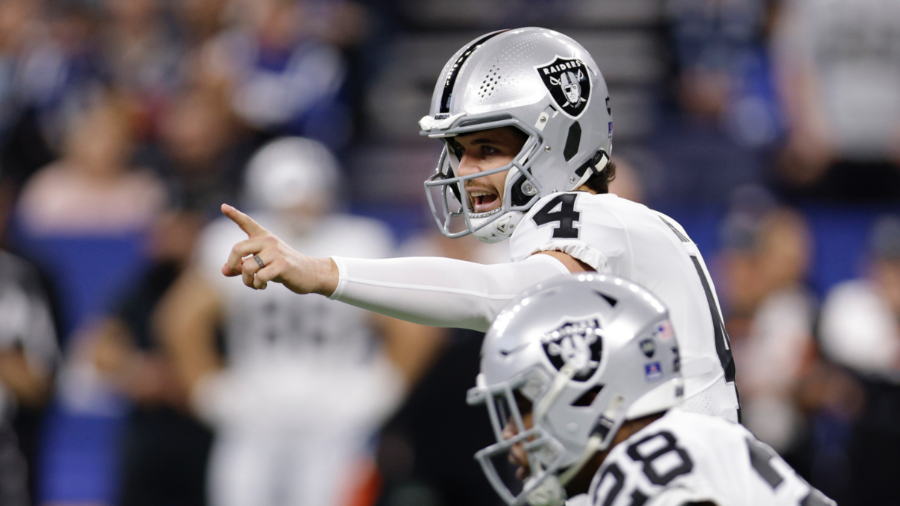 It all comes down to Sunday night for Derek Carr and the Raiders. [And the Chargers too, but they’re not pictured.] (Photo by Michael Hickey/Getty Images)

Chiefs at Broncos
Kansas City blew the AFC’s top seed last week in Cincinnati. It’s weird seeing Patrick Mahomes struggle this season, but it was even weirder watching Joe Burrow play with the swag Mahomes used to. There’s still a confidence issue with Mahomes. He’s not the care-free, cutting it lose quarterback that dominated football for three seasons. CHIEFS -11.5

Cowboys at Eagles
There isn’t enough to gain for the Eagles to risk injury. A 6th seed sounds better than a 7th seed but in all likelihood you’re going to Lambeau with a Wildcard win either way. On the other hand, a 6th seed increases the likelihood of playing the Buccaneers. Tampa Bay is a mess right now. Their offensive is significantly injured and the Antonio Brown drama has hurt the team on the field and probably off it, too. Dallas has even less incentive to play their stars Sunday. They’d need a minor miracle to move up to the 2nd or 3rd seed in the NFC, so the Eagles will likely end up victorious even without a full effort. (Apparently Vegas thinks I’m wrong.) EAGLES +5

Bengals at Browns
The Bengals have some really strange losses on their schedule. Look at this… Bears; loss. Jets; loss. Browns; BIG loss. I really like the Bengals and their overall up-and-coming vibe, but I will be most hesitant to place dollars on them come the postseason. And while we’re discussing young, on the rise AFC North teams, remember the Browns were that team a year ago. Now look at them. Nothing is promised in the NFL. BENGALS +6

Packers at Lions
Aaron Rodgers is the MVP. Poked or un-poked he was the best player in the NFL this season. Give him his flowers. LIONS +4

Bears at Vikings
I still believed the Vikings would find their way into the postseason right up until Kirk Cousins got Covid. What a disastrous season for a team talented enough to be one of the NFC’s best. I generally endorse keeping competent coaches but I think the carriage is turning back into a pumpkin for Mike Zimmer. VIKINGS -5.5

Football Team at Giants
Donald Trump took over Joe Judge’s body for a few moments last week. I laughed. The Giants can talk all they want about culture and going the right direction and who wants to be there, but none of that matters if you don’t win. FOOTBALL TEAM -7

Colts at Jaguars
I’ve really enjoyed the Colts in-season Hard Knocks. With that said, and maybe I’m projecting here, but there is a strong undercurrent of the Colts trying to convince themselves Carson Wentz is really good. Disclaimer: I root for Wentz. He wasn’t blameless, but he got a raw deal in Philadelphia. Unfortunately, Wentz has been underwhelming over the last month. His footwork was bad on Christmas and he missed some huge open throws in Week 17. Even his TD to TY Hilton was a muffed interception. I’m not giving up on Wentz… yet, but my hope is fading. JAGUARS +16

Steelers at Ravens
Pittsburgh makes the playoffs if they win and Republicans and Democrats join hands to declare they have absolutely no idea what they’re doing. It’s that simple. STEELERS +5

Titans at Texans
Though they’re not quite on the Bengals’ level of strange losses, the Titans resume is still pretty impressive. Jets; loss. Texans (at home); loss. Pittsburgh; loss. I’m not giving the Titans the top seed in the AFC until they officially take it. Houston has played real tough the last two weeks and I’m sure sweeping the Titans and knocking them out of the top spot would be a crowning achievement on an otherwise lousy year. TEXANS +10

Saints at Falcons
No one wants to see the Saints in the playoffs. I don’t mean that in a plucky, underdog type of way either. Literally, no one wants to watch the Saints anymore. Just go away. Try again next season. FALCONS +3.5

Jets at Bills
Zack Wilson hasn’t thrown an interception in a calendar month. Trevor Lawrence has thrown seven over that same stretch. What does that mean? I have no clue, but Lawrence is a lost pup right now and Wilson has shown signs of settling in and perhaps (gulp) giving some hope to Jets fans. BILLS -16.5

49ers at Rams
Outside of the win or lose nightcap, this is the game of the day. The Rams get the 2nd seed with a win, which is a huge deal because you get two home games instead of one. The 49ers, on the other hand, would need a Saints loss to make it in if they fail to beat the Rams. Speaking of future quarterback hope… not sure how great I’d be feeling about trading up for Trey Lance at this point. RAMS -4.5

Patriots at Dolphins
New England is still in play for the 1st, 2nd, 3rd, 5th and 6th seed, so yeh, they’ll have a lot to play for at kickoff. As the afternoon turns to evening and other games progress they may call off the dogs but here’s hoping the Patriots give Miami one final loss to further improve that Eagles draft asset. PATRIOTS -6.5

Seahawks at Cardinals
The Cardinals can get to the two spot with a win and losses by the Rams and Buccaneers. How much Kyler Murray plays will certainly depend on those two games because if neither the Rams or Bucs lose the Cardinals are stuck at 5. If I’m the Cardinals, I run the football and do whatever I can to stay within striking distance without putting Murray in harms way. Of course, it’s impossible for Arizona to accomplish that but one can dream. SEAHAWKS +6.5

Panthers at Buccaneers
I am excited to see how Tom Brady turns the current Buccaneers situation into another postseason success. The odds are certainly stacked against him. As for the Panthers, what proof do we have that Matt Rhule is leading this team in a positive direction? In two seasons, Rhule’s Panthers have two wins after Halloween. No bueno. BUCCANEERS -8

Chargers at Raiders
I do not trust either team, but I’m going to avoid the team that lost to the Bears, Giants and Washington. Is that all I have to say about the biggest game of the week? Yes, yes it is. Oh wait… I would like someone to explain to me why every 3rd down pass isn’t thrown in Keenan Allen’s direction. Too often, Justin Herbert’s first look is elsewhere. Allen is always open. It’s not an exaggeration. CHARGERS -3