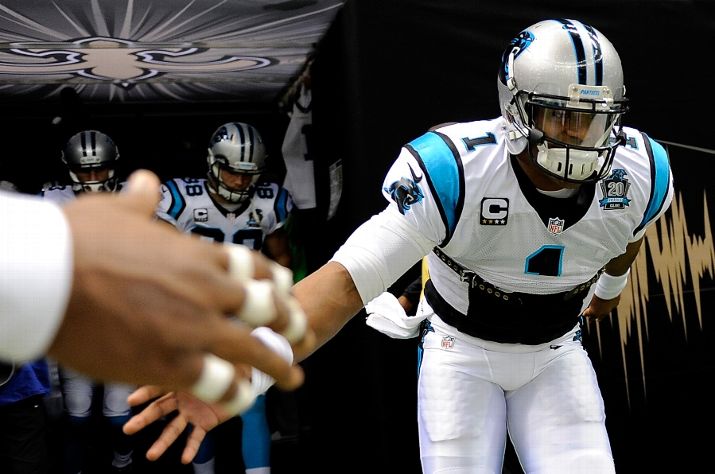 After 16 weeks, one team will stumble into an NFC South Championship. Will it be the Falcons or Cam Newton’s Panthers? (Photo by Stacy Revere/Getty Images)

I stopped caring about football the moment the Eagles no-showed in Washington, D.C. Nonetheless, here are my abbreviated picks.

Browns at Ravens
The Browns celebrated Thanksgiving at 7-4 with a division title and the postseason a real possibility. They also got their All-Pro receiver back. But since then, the Browns benched their starting QB, watched their 1st round pick go up in flames, lost four straight games, were eliminated from playoff contention, and suspended said All-Pro receiver Josh Gordon for the season finale. That’s quite a run. RAVENS If I were Charles Barkley; Ravens -14

Cowboys at Redskins
I’d be shocked if Dallas rolled the dice and played its starters to chase the NFC’s top seed. While St. Louis is no pushover, chances are slim Seattle loses at home later in the day. Also, the health of Tony Romo, DeMarco Murray and the rest of the team are far more important than a 1st round bye. Given that Dallas has been significantly worse at home than on the road, winning the top seed may not be in the Cowboys’ best interest. For all those reasons I’m betting Dallas tanks this one. REDSKINS If I were Charles Barkley; Redskins +5.5

Colts at Titans
With one of the league’s top quarterbacks, it’s weird I find the Colts so unwatchable. Indianapolis will likely punt this week as well. COLTS If I were Charles Barkley; Titans +7.5

Jaguars at Texans
Houston was a Ryan Fitzpatrick broken leg away from winning the AFC South. You can’t convince me otherwise. TEXANS If I were Charles Barkley; Texans -7.5

Chargers at Chiefs
Wouldn’t it be great if in Alex Smith’s absence the Chiefs finally threw a touchdown pass to a receiver? I don’t know Kansas City’s cap situation, but I wouldn’t be surprised if the Chiefs pursued Jeremy Maclin in the offseason. Andy Reid drafted Maclin and always thought highly of him. CHARGERS If I were Charles Barkley; Chargers +2.5

Jets at Dolphins
Don’t care. And neither does anyone else. With Jim Harbaugh likely heading for Ann Harbor, the Dolphins will bring Joe Philbin back. Dolphin fans are less than thrilled. DOLPHINS If I were Charles Barkley; Jets +7

Bears at Vikings
The Vikings and Mike Zimmer are pointed in the right direction. A 7-9 season, given the Adrian Peterson suspension is quite an accomplishment. VIKINGS If I were Charles Barkley; Vikings -7

Bills at Patriots
Tom Brady won’t be on the field after 2PM ET. Rob Gronkowski shouldn’t see the field at all. BILLS If I were Charles Barkley; Bills +6.5

Eagles at Giants
I don’t often blame Chip Kelly or head coaches for losses because I think the players are more responsible for outcomes than coaches. However, Chip Kelly failed to prepare his players for last week’s critical game against a left-for-dead Redskins team. The Eagles came out flat and lacked urgency until they trailed by 10 early in the 4th quarter. The performance on the field falls on the players. The lack of preparation and urgency points to the coach. Mismanaging the clock also belongs to Kelly, but here in Philly we’re used to that from our head coach. EAGLES If I were Charles Barkley; Eagles +3

Saints at Buccaneers
The Buccaneers would be fools to win. SAINTS If I were Charles Barkley; Saints -5.5

Panthers at Falcons
I think it says something about the quality of the NFC South when, despite being the only “winner takes all” game on the schedule for Week 17, the NFL opted to flex the Bengals/Steelers game to Sunday night. A few weeks ago I thought either the Saints or Panthers would win the division. Now I like the Falcons. FALCONS If I were Charles Barkley; Falcons -3

Lions at Packers
Detroit has been flirting with losing to bad teams recently. Against a solid team a loss seems like sure thing. PACKERS If I were Charles Barkley; Packers -7.5

Raiders at Broncos
Peyton Manning and the Broncos need one big collective hug. BRONCOS If I were Charles Barkley; Broncos -14

Cardinals at 49ers
So long, Jim. CARDINALS If I were Charles Barkley; Cardinals +6.5

Rams at Seahawks
Jeff Fisher’s Rams specialize in doing the thing we least expect. Losing to the Giants at home and then beating Seattle in Seattle would fit the trend. However, given their play over the last month, the Seahawks may not lose again until next season. SEAHAWKS If I were Charles Barkley; Rams +12.5

Bengals at Steelers
I wonder what Cincinnati would look like if Mike Zimmer were still the defensive coordinator. With a potent downhill running attack, the Bengals offense is finally able to sustain drives and control the clock. Something it struggled with over the past few seasons. Pair that ground game with the dominant defense the Bengals produced under Zimmer and Cincinnati could be legitimate title contenders. Instead, Zimmer is gone and the defense has suffered immensely. The Steelers pummel bad defenses. STEELERS If I were Charles Barkley; Steelers -3.5