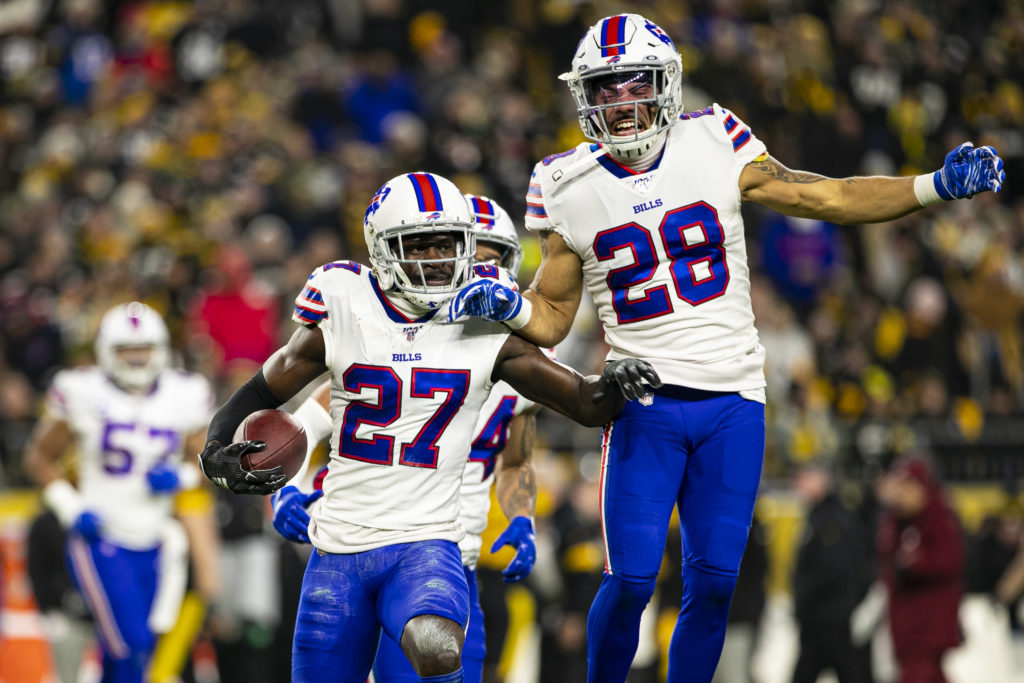 The Bills are where they are because of defense. They’re not the only ones. (Photo by Icon Sportswire via Getty Images)

Texans at Buccaneers (1PM ET)
Quarterbacks are overpaid in the NFL. Jared Goff makes way too much money (4 years/$134 million). Matt Ryan isn’t worth his price tag (5/$150). Derek Carr is essentially Andy Dalton without red hair (5/$125). Carson Wentz’s value varies week-to-week (4/$128). Dak Prescott will soon join this crew at somewhere close to $38 million per year. Enter Jameis Winston. What kind of contract Winston signs this offseason will be fascinating, at least to me. Winston will come out of this with a value contract or laughably overpaid. Think about it. When was the last time an NFL quarterback signed a new deal and people didn’t lose their minds? Winston is worth the risk assuming the contract isn’t outrageous. He’s talented with obvious flaws, but he’s also young. Winston will be 26 next season. He’s six months younger than Prescott and a full year younger than Wentz. Winston has a ton of talent around him and for the first time in his young career, has a good coach leading him. As for the game… It’s hard to imagine the Buccaneers winning without their top two receivers and Houston able to clinch the AFC South with a win. However, the Texans are a weird team. They’re going to play down to Tampa’s level. I just don’t know if the Bucs will have enough to pull it off. TEXANS If I were Charles Barkley; Buccaneers +3.5

Bills at Patriots (4:25PM ET)
The Bills, Patriots and Steelers will likely make up half of the AFC’s playoff teams. If defense is your thing, the AFC Playoffs are for you. New England may scheme their way to 20+ points in the postseason, but it’s hard to imagine the Bills or Steelers getting there. But back to New England… I’m not buying this offensive apocalypse will end the Patriots. They’re going to figure something out. This is supposed to be a defensive battle Saturday but I think the Patriots offense breaks out a bit against a Bills team feeling itself after last week’s big win. PATRIOTS If I were Charles Barkley; Patriots -6.5

Rams at 49ers (8:15PM ET)
The 2019 Rams are the perfect comeback to anyone that says Lamar Jackson will run the league for years to come. Jared Goff looks lost a year after being an MVP candidate. His numbers this season are more Baker Mayfield/Kyle Allen/Gardner Minishew than Brees, Rodgers or Brady. Sean McVay’s offense has been on the struggle bus, too. The Rams have scored 24 points or less seven times already this season. In 2018, they failed to reach 24 points only 3 times. The NFL is the smartest professional league when it comes to evolving on the field. The Rams are on playoff life support and won’t know if they’re still alive in Week 17 until late Monday night, assuming they win here. RAMS If I were Charles Barkley; Rams +7

Jaguars at Falcons
The Falcons have road wins over the Saints and 49ers and will probably lose at home this week to the Jaguars because that’s what these Falcons do. FALCONS If I were Charles Barkley; Jaguars +7.5

Ravens at Browns
Great football coaches are often daring and inventive. Freddie Kitchens is both of those things, only in all the wrong ways. His second year quarterback has been a disaster for much of the season. His top wide receivers are underachieving and unhappy. His offensive line is among the worst in the NFL. His running back leads the NFL in rushing and yards per carry. That NFL leading running back has carried the ball more than 20 times only three times this season. Furthermore, that struggling quarterback has thrown the football at least 30 times in all but two games this season and has more than 35 attempts in seven of them. Freddie Kitchens is a treasure. RAVENS If I were Charles Barkley; Ravens -10

Saints at Titans
Tennessee losing last week was devastating to the Titans and football fans everywhere. The AFC South is all but lost and the Wildcard would require help from the Steelers. Derrick Henry in the playoffs would’ve been a fun experience. Henry is Brandon Jacobs but with skill and speed. Make sure this is the game you watch Sunday. It’s the only one with playoff implications on both sides and doesn’t include a crappy NFC East team. TITANS If I were Charles Barkley; Titans +3

Panthers at Colts
Kyle Allen looks great. We don’t need Cam Newton anymore. Allen is struggling but he has potential. Allen looks lost, this isn’t good. Allen will be benched for rookie Will Grier. Tough season, Panther fans. But hey, Great White Hope is going for the scrimmage yards record. Only 388 to get the record. I’m way more excited about this than I should be. COLTS If I were Charles Barkley; Colts -7

Bengals at Dolphins
One more loss and the top pick is yours, Cincinnati. Don’t screw this up. DOLPHINS If I were Charles Barkley; Dolphins +1

Steelers at Jets
In 2018 it looked as if the NFL had entered a new offensive age where teams put up 40 points regularly and any offense could reach 27 points with relative ease. In 2019 we’ve had offenses led by Mason Rudolph, Josh Rosen, inept Allens, Ryan Finley, David Blough, Jeff Driskel, and a guy who goes by “Duck.” Joe Burrows can’t get here soon enough. STEELERS If I were Charles Barkley; Steelers -3

Lions at Broncos
The NFL has five intriguing matchups this weekend. Two are on Saturday. One is Sunday at 1PM. Another is at 4:25PM, and the last is on Monday night. The other 11 games are straight up dumpster fires like this one. BRONCOS If I were Charles Barkley; Broncos -7

Raiders at Chargers
The Chargers don’t have a fan base. The Raiders are moving nine hours from theirs. Who attends this game? Who is watching it? On a positive note; Austin Ekeler is a poor man’s Christian McCaffrey and if there are any Chargers fans, they should be excited. Of course, that’s assuming the team signs him to a reasonable contract and he’s interested in playing 16 road games a year. CHARGERS If I were Charles Barkley; Chargers -7

Cowboys at Eagles
I don’t see the Eagles winning this one, not with how ineffective the offense has been in the first half the last two weeks. Not with how lousy the defense has been in stopping bad offenses. Not with how little pressure the front line has generated. Not with the play-calling slumps that have haunted Doug Pederson this year. Not with the lack of talent at receiver. The Cowboys are more talented and a better team. Home field is the Eagles greatest asset here, but this version of the Eagles has been the slowest starting team in memory. They’ll lose the crowd quick if they start in mud or find themselves down multiple scores by the half. Maybe Carson Wentz can save the day again or maybe this is finally the game that gets Jim Schwartz fired. So much is in play. It’ll be the Super Bowl of bad. Get excited. COWBOYS If I were Charles Barkley; Cowboys -2

Cardinals at Seahawks
Seattle is going to win the NFC West despite the worst point differential of NFC playoff teams. In fact, their point differential is 21 points worse than the team above them (Green Bay). Seattle can absolutely win the Super Bowl but they’re more likely to fall to the NFC East Champion in the Wildcard round. SEAHAWKS If I were Charles Barkley; Cardinals +9.5

Chiefs at Bears
Chicago is eliminated from playoff contention and the Chiefs would have very little to play for if New England and Baltimore won earlier in the weekend. (Yes, Kansas City could still catch New England with a win but that would require a Patriots loss to Miami in Week 17.) Maybe Andy Reid uses the last two weeks as an open audition to all the backs on his roster. He’s gonna need one half-decent one come January. CHIEFS If I were Charles Barkley; Chiefs -6

Packers at Vikings
Green Bay is not in a good place. They haven’t had a nice win since beating the Chiefs back in Week 8. Since then they’ve beaten the Panthers and Giants, squeaked out wins against the Redskins and Bears, got drubbed by the Chargers, and annihilated by the 49ers. Winning is the name of the game, sure… but anyone with eyes sees the Packers don’t have the potency of an 11-3 team. This matchup with the Vikings doesn’t even matter that much to Green Bay as far as the division is concerned. They can lose and still win the NFC North with a win over the hapless Lions in Week 17. VIKINGS If I were Charles Barkley; Vikings -5.5