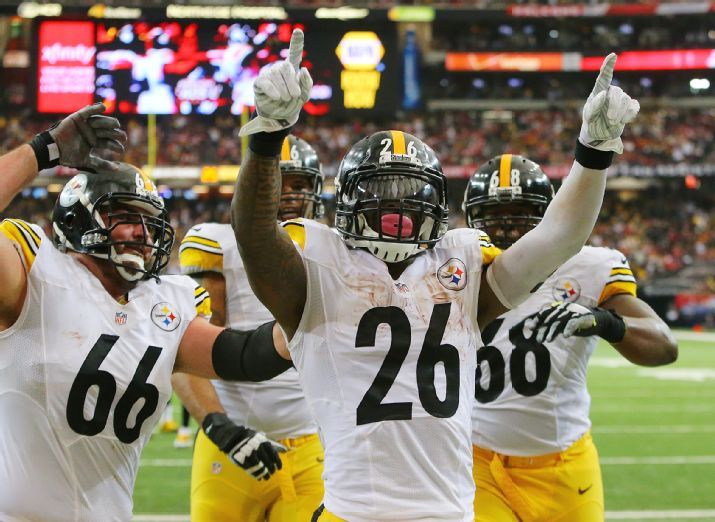 Le’Veon Bell and the Pittsburgh offense have the Steelers in position to return to the postseason. But first they need a win against the desperate Chiefs. (AP Photo/Atlanta Journal-Constitution, Curtis Compton)

Titans 13 at Jaguars 21
The game began with Jacksonville kicking off to the Titans and ended with Sen’Derrick Marks sacking Charlie Whitehurst. Nothing interesting happened in between.

Eagles at Redskins
The Redskins are a mess but the Eagles will struggle if they’re still sulking over losses to the Seahawks and Cowboys. If Chip Kelly can convince his guys to focus only on winning Saturday, the Eagles should be fine. Though, wouldn’t it be the Eagles’ luck to have Robert Griffin III miraculously transform back into the 2012 version of RGIII? I’m not feeling as confident in the Eagles as I should given that the opponent has only three wins. EAGLES If I were Charles Barkley; Eagles -8.5

Chargers at 49ers
In their last eight games, the 49ers have scored a total of 33 2nd half points. 33 POINTS! That’s amazing. Once upon a time Colin Kaepernick could score 33 points in a half by himself, or at least it felt that way. The Chargers need a win to stay alive in the tightly contested AFC playoff race. Though the San Francisco defense has been great all season, they’re due for a blowout. The offense gave up months ago. The coach checked out, too. It’s only natural for the defense to punch out. CHARGERS If I were Charles Barkley; Chargers +1

Vikings at Dolphins
Though Miami has essentially been eliminated from the playoffs, the last two weeks of the season may go a long way in determining whether or not Joe Philbin keeps his job. On the other hand, even a strong finish may not cement his return as long as Jim Harbaugh remains an option. Meanwhile, Minnesota is 4-3 over its last seven games, including losses to the 10-4 Packers and Lions by a combined five points. Don’t sleep on the Vikings, especially if your job is on the line. DOLPHINS If I were Charles Barkley; Vikings +6.5

Ravens at Texans
It’s been a frustrating year for some of the NFL’s top defenses. Buffalo, Kansas City, Houston and San Francisco all rank within the top ten in points allowed. Not one team from that group owns more than eight wins. Combined, they’re 30-26. Great defenses can overwhelm great offenses but sometimes it’s your own offense that becomes the biggest obstacle to winning. RAVENS If I were Charles Barkley; Ravens -5.5

Lions at Bears
I didn’t expect the Bears to have much of a chance anyway, but the promotion of Jimmy Clausen cemented the Eagles Wildcard fate because there’s no way the Lions lose now. (Let’s see if this works.) LIONS If I were Charles Barkley; Bears +9

Browns at Panthers
After Johnny Manziel’s performance a week ago, I’d have a hard time picking the Browns over the Jets. The Panthers secondary is one of the NFL’s weakest, so if Manziel can’t muster a few big plays the Browns may want to consider trading Manziel to Indianapolis for a future 1st rounder. Hey, it worked once. Why not try again? PANTHERS If I were Charles Barkley; Panthers -3.5

Falcons at Saints
Unless both the Falcons and Panthers lose this week, the NFC South title will be decided in Week 17. I’ve given up on predicting NFC South battles. When I zig they zag. How great is it that the 14th team in the NFC standings could very well host a playoff game in two weeks? Anyway, the last time New Orleans won at home was October 26th. They’re due. Though I think the Saints win, I’d rather they lose so Atlanta/Carolina in Week 17 is for all the marbles (assuming Carolina beats Cleveland). SAINTS If I were Charles Barkley; Saints -6

Packers at Buccaneers
Poor, poor Buccaneers. Aaron Rodgers is coming off his worst game in years and possibly ever. Tampa Bay is thankful it won’t even have to try to lose this week. PACKERS If I were Charles Barkley; Packers -11.5

Chiefs at Steelers
I’m expecting a great game here. The Steelers can win the AFC North by winning out. The Chiefs can nab a Wildcard berth by doing the same. It’s been a strange year for both franchises. Pittsburgh owns two head scratching losses to teams with a combined 5-23 record. The Chiefs one-upped the Steelers by dropping two games to teams with a combined 4-24 record. Despite the two aforementioned hiccups, the Chiefs have been the more consistent team. Kansas City’s defense has been overlooked most of the season. Also, I don’t totally trust the Steelers. In fact, given the weakness of Pittsburgh’s secondary, I think Alex Smith finally throws a TD to a receiver. CHIEFS If I were Charles Barkley; Chiefs +3

Patriots at Jets
If I’m Bill Belichick I strike early and often and get Tom Brady and Rob Gronkowski out of harms way ASAP. I know pulling stars with a big lead is rarely seen until the later half of the 4th quarter. However, if you’ve seen Geno Smith play this season, a 21 point halftime lead is equivalent to a 250 point deficit. I’m going to miss Geno Smith. PATRIOTS If I were Charles Barkley; Patriots -10.5

Giants at Rams
What a HUGE game for Jeff Fischer. 2014 could finally be the year he passes seven wins. But he can’t do it with a loss to the Giants. Can you feel the excitement? On a related note, I’m already experiencing Odell Beckham Jr. anxiety for the Eagles Week 17 visit to New York. RAMS If I were Charles Barkley; Rams -6

Bills at Raiders
How slim are Buffalo’s playoff chances? If they won and every nine and eight win team ahead of them in the current AFC playoff standings lost this week, the Bills would still be on the outside looking in heading into Week 17. I’m not sure what would qualify as the bigger miracle; Buffalo winning and five contenders losing or Kyle Orton resembling a competent NFL quarterback. (This line is too big. The Bills can’t score.) BILLS If I were Charles Barkley; Raiders +6.5

Colts at Cowboys
There’s no way DeMarco Murray plays with a fractured hand. The Cowboys are just posturing. I understand injuries are all different, but Warren Sapp sat out a week with the same injury. Trent Cole will be out this week with a fractured hand as well. Sapp and Cole are defensive lineman who aren’t required to hold on to the football while 11 monsters try to separate their heads from their bodies. How Murray expects to survive without fumbling is a mystery to me. As for the game, neither defense is very good. I’m counting on/praying/hoping the Cowboys are still high on last week’s victory and wet the bed this week. I believe in you, Andrew Luck. COLTS If I were Charles Barkley; Colts +3

Seahawks at Cardinals
Bruce Arians LOVES being an underdog. The only thing he loves more is shoving it in everyone’s face when his team finishes on top. Just ask the Rams. However, as Maximus once said, “the time for honoring yourself will soon be at an end.” That end will be Sunday night. Ryan Lindley against the Seahawks defense is equivalent to the 76ers against the Warriors. Despite a stagnant October and some personnel drama, Seattle will once again find itself with home field advantage in the NFC Playoffs. Good luck to the rest of the NFC. SEAHAWKS If I were Charles Barkley; Seahawks -8

Broncos at Bengals
This is actually a sneaky big game for the Broncos. A win for the Bengals Monday could give them a shot at the two seed in the AFC with a Week 17 victory and a Denver loss. *Checks schedule* Nevermind. Denver has Oakland at home next week, so crushing the Raiders will avert any crisis. Oh well, the drama was fun for the 30 seconds it lasted. (Did I already know Denver had Oakland next week? Did I play dumb to make an even dumber joke? Yes and yes.) Due to that giant sized parachute the Broncos have (Oakland next week), and how much this game means to Cincinnati, I’m taking the Bengals. BENGALS If I were Charles Barkley; Bengals +3.5