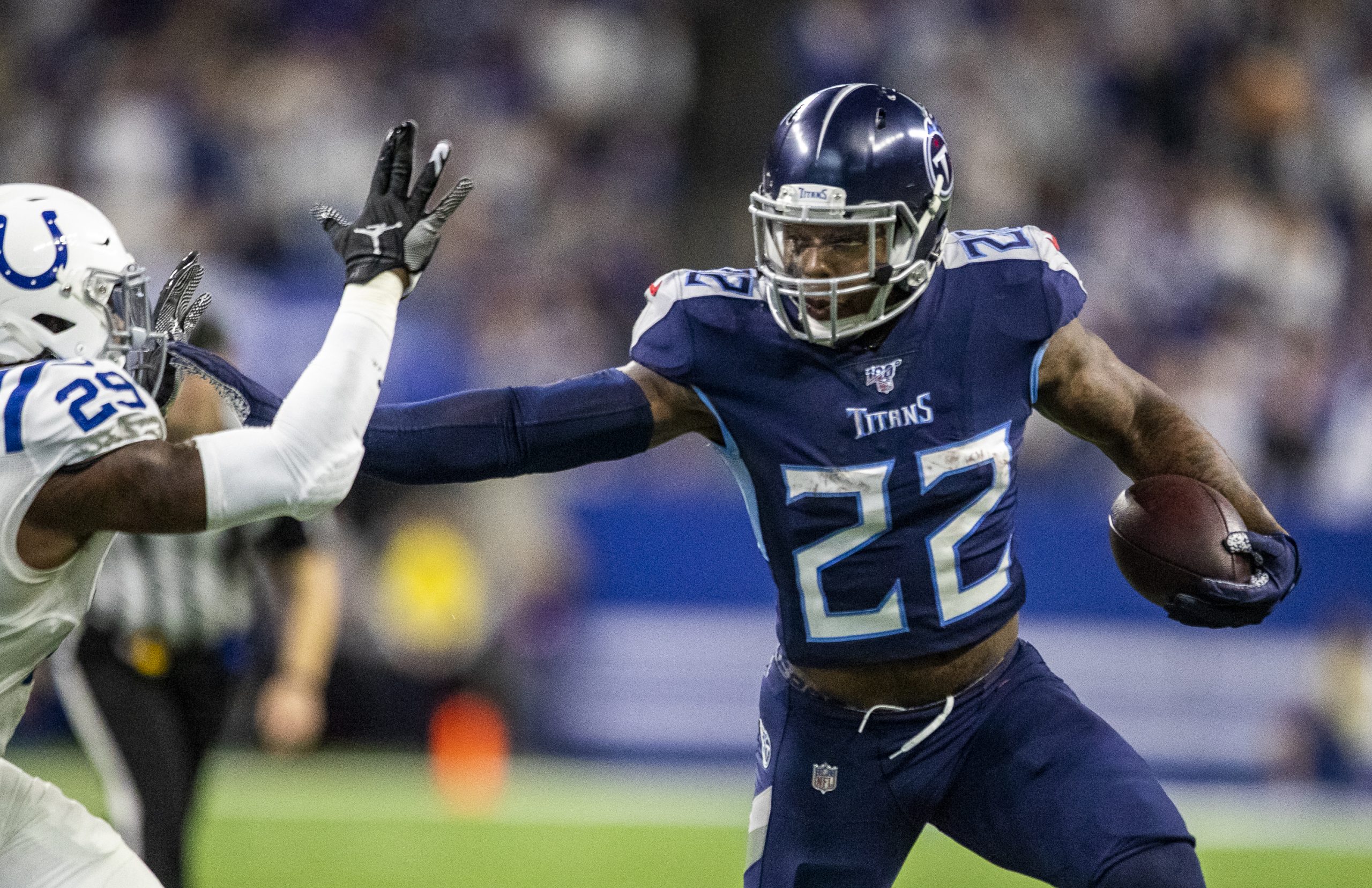 Derrick Henry and the Titans are rolling through the AFC. Will the NFL figure out Lamar Jackson? Saints and 49ers battle for NFC’s best. (Photo by Bobby Ellis/Getty Images)

Cowboys 24 at Bears 31
The Cowboys got trounced. After a touchdown on their opening drive and an interception off Mitch Trubisky on Chicago’s subsequent drive, it looked as if Dallas may roll to an easy victory. Nope. The Cowboys disappeared after that and were not heard from again until garbage time. I know it’s fun to pile on the Cowboys and kick ‘em while they’re down, but this game meant nothing to them. They can still win the division by just beating the Eagles and the dreadful Redskins. That is of course assuming the Eagles don’t aid them, which is entirely possible. Anyway, the Cowboys stink and the Bears look like a feisty Wild Card team if they can get some help and catch the Vikings.

Panthers at Falcons
The Panthers lost a franchise QB, fired their head coach of nearly a decade, and have lost four of five. At least they have Christian McCaffrey and DJ Moore to be excited about. Atlanta, on the other hand, hasn’t fired their head coach despite a 10-18 record over the last two seasons. They also owe Matt Ryan a truckload of money through at least 2020 and already guaranteed $5.5 million of his 2021 price tag. So take heart, Panther fans. It could be worse. PANTHERS If I were Charles Barkley; Panthers +3

Ravens at Bills
Everyone needs to slow down on this Lamar Jackson craziness. Yes, he’s electric and amazing. He’s the MVP. He is must watch and right now the Ravens look like title favorites… but the NFL ALWAYS figures this stuff out. Colin Kaepernick was an afterthought within three years of looking like the greatest player in NFL history. The Wildcat has completely disappeared since the Dolphins rode it to a playoff appearance. Sean McVay was Boy Wonder a year ago, and until last week his offense was in complete disarray. Jackson won’t all of sudden stink, but the league will figure him out. Like my Dad always said, the NFL stands for “Not For Long.” BILLS If I were Charles Barkley; Bills +6.5

Bengals at Browns
I’ll admit it, I really enjoy the Baker Mayfield State Farm commercials. The smoke alarm one gets me every time. I would’ve loved to see the Browns in the postseason. In fact, I’m not ready to let go of that dream. I think 9-7 will get the job down. Unfortunately, that requires upending the Ravens in Week 16 for the 2nd time this season. I still believe. BROWNS If I were Charles Barkley; Browns -7

Redskins at Packers
Last time I called Aaron Rodgers “washed” he threw five touchdowns a few days later. I was kind of right, though. He is fading. Great players can still muster greatness from time to time, but the sure sign of decline is no longer being able to reach that level consistently. Green Bay won’t make any noise in the playoffs until they realize Aaron Jones is their best offensive weapon, not Rodgers. PACKERS If I were Charles Barkley; Packers -13

Lions at Vikings
A few weeks ago it looked like Minnesota was a lock for at least an NFC Wildcard berth. Now they’re 2-2 over their last four with an ugly win over Denver and have the Packers and Bears at home to close the season. Minnesota can still win the NFC, the NFC North, a Wildcard spot, or miss the playoffs entirely. December is the best. Also, why does everyone hate Matt Patricia? Detroit played well early in the year and then suffered agonizing defeats to the Chiefs and Packers. Then they lost their quarterback. Even then, they’ve competed each and every week. I’m buying 2020 Lions stock if Patricia isn’t fired. VIKINGS If I were Charles Barkley; Lions +12.5

49ers at Saints
San Francisco surprised me a lot last week in Baltimore. That was the first time all season I considered them a Super Bowl contender. Maybe I’m an idiot. Ok, sure I’m an idiot, but here’s my idiotic take on the 49ers… If the Eagles somehow win the NFC East, I want San Francisco to be the ones traveling to Philadelphia. Not the Packers, not the Seahawks, not the Vikings. I want the Niners. I think the Saints prove they’re the NFC’s best on Sunday and inch closer to the almost certainty of home field throughout the playoffs. SAINTS If I were Charles Barkley; Saints -2

Dolphins at Jets
The Jets are flirting with falling out of the top 10 in the 2020 NFL Draft. Miami is hanging on to the top five by a thread. Who wants to lose more? JETS If I were Charles Barkley; Jets -5.5

Colts at Buccaneers
Losers of four of their last five and sporting an injured quarterback and missing two of their top receivers, it appears the Colts are on the verge of letting a once promising season slip away. The return of Marlon Mack certainly gives the offense back its effectiveness in the ground game but is it too late? The Colts own the worst conference record of AFC Wildcard contenders and already need help to sneak in. COLTS If I were Charles Barkley; Colts +3

Broncos at Texans
The Texans and Titans will face off twice in the final three weeks to determine the AFC South champion. Well done, NFL. Well done. Look out for the Broncos here. Houston is coming off a big win with another big showdown up next week. Denver has also found itself over the last month. If not for a Noah Fant drop in the end zone, the Broncos would be 3-1 over their last four… all against teams that were at the time in contention for the postseason. Beware, Houston. TEXANS If I were Charles Barkley; Broncos +9

Chargers at Jaguars
Poor Nick Foles. Poor Chargers. This is the ultimate pity bowl. I’m still riding with the Chargers even though I know their season is sunk and no team is as morally defeated. Philip Rivers is a drug I can’t quit. CHARGERS If I were Charles Barkley; Chargers -3

Titans at Raiders
This is it for the Raiders. I don’t see how they can lose here and still claw their way into the playoffs. A loss would essentially put them three behind Tennessee, three or four behind Houston (depending on their outcome), and would even drop the Raiders behind Cleveland if the Browns were to win. I was a Raiders believer a month ago and then Derek Carr fell off a cliff. Can someone explain why Josh Jacobs only gets the football in the 1st half, and don’t use the score excuse. He’s their best player. TITANS If I were Charles Barkley; Titans -3

Chiefs at Patriots
Tom Brady’s weapons are slightly better than Carson Wentz’s in Philadelphia. If the great Tom Brady can’t salvage that mess in New England maybe we can all loosen up on Ginger Jesus in Philadelphia. I’m real excited for this matchup. The Chiefs can’t run the football and the Patriots have the best secondary in the league. Also, Patrick Mahomes hasn’t looked all that great of late. He threw a horrendous cross-field ball last week that was an EASY pick-six and the Raiders dropped it. Remember how Mahomes was 2018’s Lamar Jackson? Remember how he could do no wrong and the league would be at his mercy for years to come? Again, the NFL always figures this stuff out. Except New England. No one has figured Bill Belichick out yet. PATRIOTS If I were Charles Barkley; Patriots -3

Steelers at Cardinals
Upset alert. The Steelers are feeling themselves after a big division win and the Cardinals are coming off their most humiliating loss of the season. Mike Tomlin has done a great job rallying the Steelers all season, but that doesn’t mean his team is any good. CARDINALS If I were Charles Barkley; Cardinals +3

Seahawks at Rams
It’s do or die for the Rams. A loss eliminates them from the NFC West title (they’re already a loooong shot) and would likely drop them two games behind the Vikings for that final Wildcard spot with only three left to play. Seattle is really good at winning games but I’m not sure they’re a really good team. I know that sounds like the stupidest sentence, but think about it. Nine of their ten victories are by one score or less, and that includes wins over some of the NFL’s worst. The Ravens and 49ers crush teams. It’s something to keep an eye on. Anyway, I’ll take the more desperate team here. RAMS If I were Charles Barkley; Rams +1

Giants at Eagles
Don’t count out Eli Manning here. He dropped 434 yards and 3 touchdowns against this defense almost two years ago to the day. The Eagles can only be counted on to disappoint. By the way, many think Dallas’ losing streak is giving Philadelphia and their fans life. Wrong. This is the meanest and most tortures route the Cowboys could take to the NFC East title. Dallas should’ve clinched it weeks ago. Instead they’ll drag the sick and dilapidated Eagles along just far enough to give them hope and then BAM, they’ll deliver the final blow themselves in devastating fashion… in Philadelphia, no less… probably in front of a national audience, too. It’s basically The Revenant except the Eagles never get inside the dead horse to survive and exact their revenge. They’re going to drown in the icy cold river. EAGLES If I were Charles Barkley; Giants +10