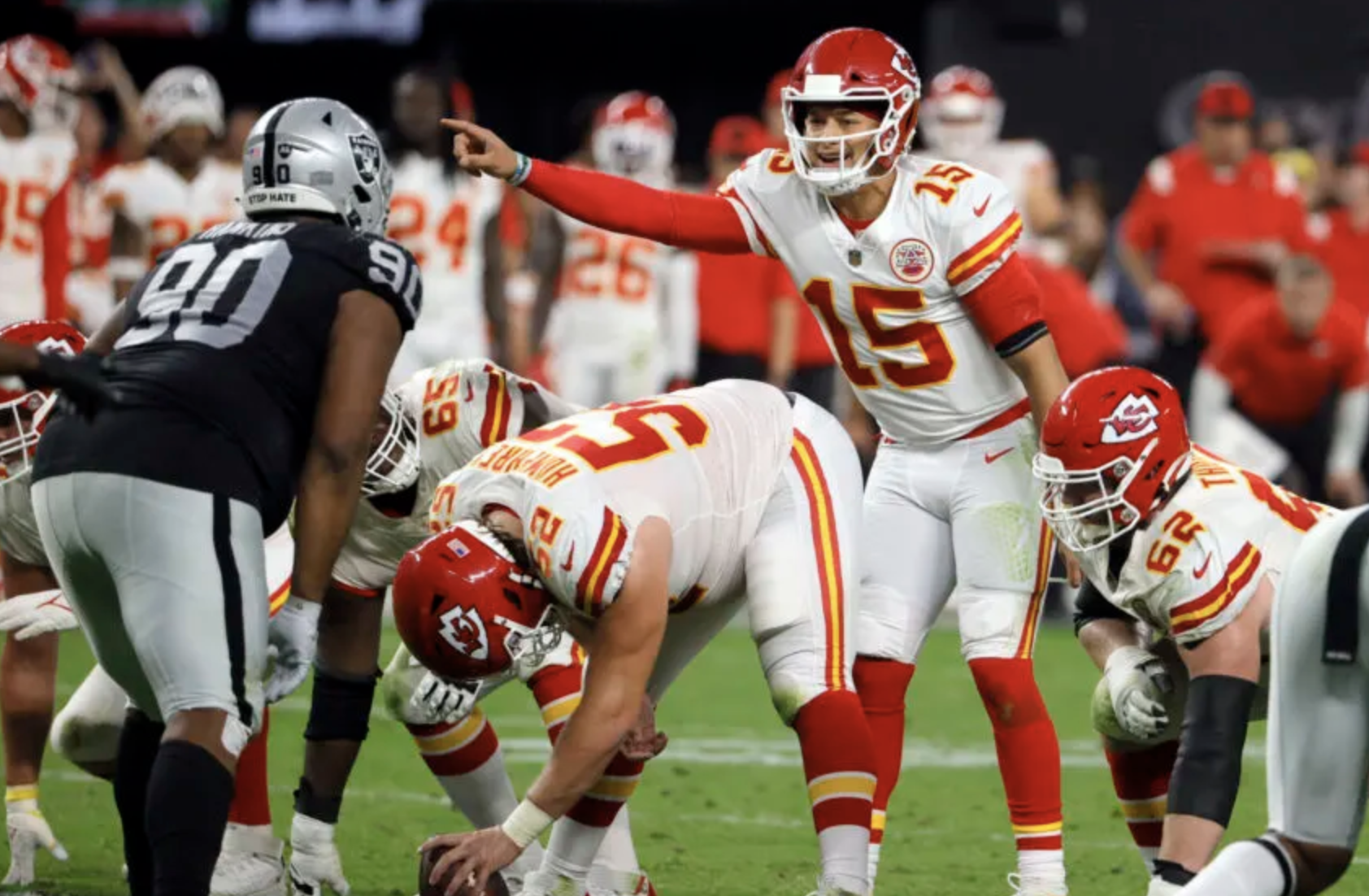 In addition to not turning the football over, the Chiefs added an effective wrinkle to their offense Sunday night in Vegas (Photo by Ethan Miller/Getty Images)

Patriots 25 at Falcons 0
Thursday nights have been rough the last two weeks. After winning three of four the Falcons and Matt Ryan were flowered with praise. Atlanta is 0-2 since, been outscored 68-3 and Ryan has thrown for 270 yards and 4 interceptions over that stretch. Oops.

Colts at Bills
Carson Wentz hasn’t missed a start due to injury since the 2018 season. Injuries certainly derailed Wentz’s development, but he’s played through a lot over the last three seasons. Despite their rough start, the Colts are right in the thick of a wide-open AFC playoff race. The Bills are one of the obvious favorites but teams like the Colts who can run the football whenever and wherever are the ones that turn the postseason on its head. COLTS +7.5

Ravens at Bears
Baltimore’s façade is fading. Outside of Lamar Jackson they really don’t run the football that well and Jackson makes up for 46% of their rushing yards. Even worse, the Raven defense can’t stop anyone of late. There is no rest in sight either. After Chicago, not a single opponent has a losing record. RAVENS -5

Lions at Browns
Cleveland needs to adopt the Nick Sirianni offense until Baker Mayfield can stand upright without wincing. Just ride Nick Chubb and D’Ernest Johnson for 38 carries a week and let play action and Myles Garrett do the rest. LIONS +11.5

Texans at Titans
If you could short the stock of any AFC top seed in history this Titans team would have to be the top choice. I know they’ve done nothing but prove haters wrong all season but they’re just not the same team without Derrick Henry. The Titans averaged 155.4 rushing yards per game before Henry’s injury. In three short weeks they’re already down to 131.6. TITANS -9.5

Packers at Vikings
No team is more confusing than the Vikings. Last week they remembered how good Justin Jefferson is and kept throwing him the football. This week he’ll probably get five targets. Winning here would be the 2021 Viking thing to do. VIKINGS +1.5

Dolphins at Jets
I hope Joe Flacco remembers how good Philadelphia was to him during his four month career there. A Jets win would be a huge boost to that Miami first rounder that’s headed to the Eagles. DOLPHINS -3.5

Saints at Eagles
The Eagles have exactly one home win in the last calendar year. Who was it against? You guessed it… the Saints. The Eagles are rolling behind their ground and pound approach and the Philly faithful are almost fully behind this weird underdog team. A win Sunday will push us to full-fledged playoff fever. EAGLES -2

Football Team at Panthers
When I watched Carolina’s win last week I didn’t think to myself, “hmm, they figured some stuff out.” I just thought Arizona was a hot mess and missing star players finally caught up to them. On the other hand, I’m not sure I’m buying Taylor Heinicke stock after one good performance in a season of mostly bad ones. However, I’m not taking the hook. Washington covers. FOOTBALL TEAM +3.5

Bengals at Raiders
Both teams are reeling from back-to-back losses and the winner will have a monstrous advantage when it comes to sorting out playoff spots. Cincinnati is a young team struggling with the expectations and performance demands of being a good team. The Raiders have been drowning in off the field drama and controversy. I can’t believe I’m saying this, but I think I trust Derek Carr here. I regret even typing that. RAIDERS +1

Cowboys at Chiefs
Before last week, Patrick Mahomes, Travis Kelce, Tyreek Hill and the Chiefs hadn’t scored more than 20 points in nearly a month. Who would’ve though that possible? Kansas City’s offensive struggles were beaten to death by the media, but it was hard to blame them. It was a fascinating (and perhaps temporary?) collapse by a quarterback we all thought would run the sport for a decade and an offense that looked virtually unstoppable for 98% of the last three years. So what changed in a week? Maybe nothing. Maybe Mahomes’ aggressiveness just worked out last week. The Raiders did drop some interceptions, after all. However, the Chiefs made one change to their offense. They threw to their running back. Andy Reid is never going to run the football to keep a defense honest. It’s been three decades. As much as we want it to happen, it’s just not in his DNA. Throwing to running backs is the next best thing. It forces the defense to keep defenders closer to the line of scrimmage and limits how often the back end of the defense can hang 20 yards out. Running backs caught 10 passes last week in a game the Chiefs led the whole way. Their previous high was 6, and those were in games the Chiefs trailed by double digits. Anyway, Dallas has an aggressive defense, so it’ll be fascinating to see how Mahomes performs. He could throw 4 interceptions or the Chiefs could use that aggressiveness to their advantage and win by 20. Trevon Diggs has been awesome this season, but teams have had success by using his aggressiveness against him (see the Vikings first TD and the Denver game). CHIEFS -2.5

Cardinals at Seahawks
The Kyler Murray absence is now concerning. At first I thought it was a precautionary measure. Then the Cardinals won so they figured why rush him back. After Arizona was smoked last week I expected the “Murray will play Week 11” announcement early in the week. Nope. Murray is awesome, but injuries that limit play or force absences derail careers. This is two years in a row now. As I mentioned earlier, Wentz fought his way out of time-missing injuries (I think). Hopefully the future is injury free for Kyler. If he plays, Arizona wins. CARDINALS -2.5

Steelers at Chargers
It’s a minor miracle the Steelers have a winning record and aren’t buried in the AFC North basement. The defense is top 10 in points against, so that’s the biggest factor for Pittsburgh’s survival thus far. Their offense is a train wreck, though. They can’t run the football (3.8 yards per rush) and the passing game isn’t much better. Only the Dolphins, Bears and Lions average fewer yards per completion than the Steelers. Yet somehow, some way, the Steelers will probably find a way to win Sunday night. STEELERS +6

Giants at Buccaneers
Are the Buccaneers bored or are they bad all-of-sudden? I’m leaning toward the former but a loss at home to the Giants would certainly swing that decision. At some point, Tampa Bay will need to figure out the back half off their defense. It was a major strength a season ago but injuries and poor replacement options have left it as the team’s greatest liability. On a related note, has the drop in production from Tampa’s defensive line been a result of a struggling secondary or part of the reason the secondary is struggling? GIANTS +11