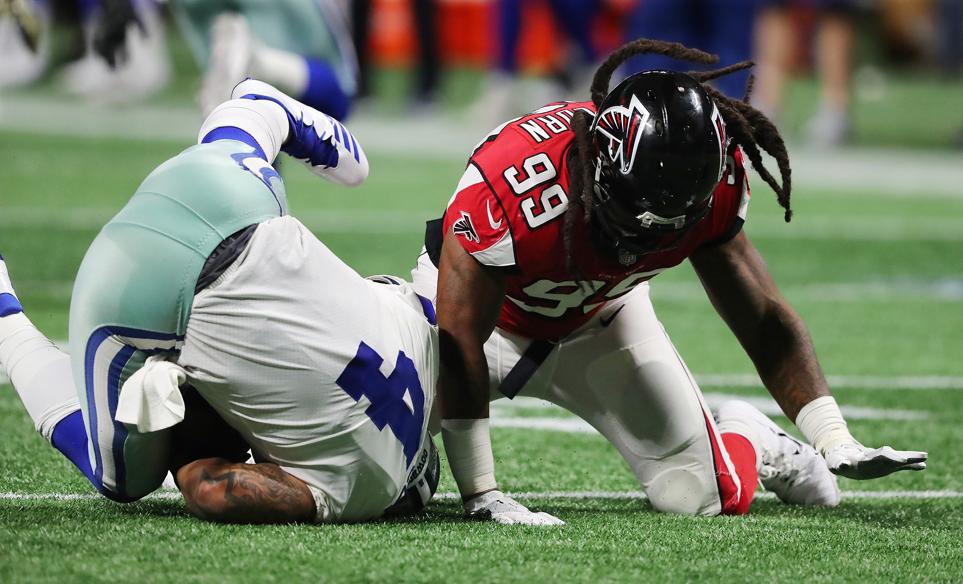 It’s sink or swim time for Dak Prescott and the 2017 Dallas Cowboys. (Photo by Curtis Compton)

Titans 17 at Steelers 40
Given their talented roster, Thursday Night was the type of performance I expect from the Steelers every week, not them squeaking out victories over the Colts or getting blown out by the Jaguars. Inconsistency aside, I think most of us can agree Pittsburgh is the best (and most potent) team in the AFC right now.

Lions at Bears
Mitch Trubisky had his best day as a pro last week. No one is happier with Trubisky proving he can throw the ball downfield than Jordan Howard. Poor Howard has been running into brick walls at the line of scrimmage all season and still manages to average 4 yards per rush. John Fox is a good coach but the way he’s handled his quarterbacks this season and that comical challenge last week have made for a bizarre performance from him this year. The Bears tend to give good teams all they can handle at home. They beat the Steelers and Panthers and should have beat the Falcons, too. They also only lost to Minnesota by 3. BEARS If I were Charles Barkley; Bears +3

Jaguars at Browns
I don’t know their salary cap situation, but why wouldn’t the Jaguars make a monster offer to Tony Romo? Romo wouldn’t have to carry the team at all. He’d have a top defense, a pounding ground game, and would only have to expose his body to punishment for two months instead five. Blake Bortles isn’t going to win you a playoff game. He can’t even keep you in a playoff game. JAGUARS If I were Charles Barkley; Jaguars -8.5

Ravens at Packers
Mike McCarthy should be fired. The Packers have been the most unwatchable team since the Rodgers injury. I’d much rather watch the depleted Giants, the Jay Cutler four yard dink and doink Miami offense, or even the Jets than Green Bay right now. It’s pretty clear those receivers aren’t special without Rodgers. Imagine if McCarthy surrounded Rodgers with top tier receivers. It’d be like Tom Brady and Randy Moss but better. RAVENS If I were Charles Barkley; Ravens -2

Buccaneers at Dolphins
Nope. DOLPHINS If I were Charles Barkley; Dolphins +1

Rams at Vikings
I know it has something to do with TV rights and the Mexico City game being the premiere afternoon showdown, but it’s a shame this intriguing matchup wasn’t flexed to 4:25. A couple of weeks ago I said Minnesota’s derailment was coming. I’m not as convinced it’ll happen. Unlike the previously mentioned situation in Green Bay, the Vikings’ talent at skill positions is hoisting up an average quarterback. Adam Thielen and Stefon Diggs have been tremendous. Imagine if Dalvin Cook wasn’t lost for the season or if their 2016 1st round pick (WR Laquon Treadwell) played like a top pick? The Rams offense is really good but I don’t trust their receiving corps. to get open against the Vikings. VIKINGS If I were Charles Barkley; Vikings -2

Redskins at Saints
Morale is low and supplies have been emptied, but I’m not ready to evacuate the “Washington is a good team” wagon yet. It appears Jay Gruden and that front office overvalued what they had at the receiver position. The loss of DeSean Jackson and Pierre Garcon has really neutered Kirk Cousin and the offense. The Jordan Reed injury only makes things worse. Now Robert Kelley is gone for the year, too. This is Washington’s last stand. 9-7 won’t get a Wildcard berth this year and finishing 6-0 isn’t happening. 5-1 isn’t likely either, but their schedule over the last month isn’t as brutal as it may have looked in September (NYG, @DAL [no Elliott], @LAC, AZ, @NYG). REDSKINS If I were Charles Barkley; Redskins +8.5

Chiefs at Giants
Kansas City better hope Andy Reid used the bye week to resuscitate the running game. Kansas City started the season 5-0 and rushed for 781 yards (156/game) at 5.7 yards per carry during that stretch. In the four games since, the Chiefs are 1-3 and have rushed for 269 yards (67/game) at only 3.24 yards per carry. Alex Smith is having a career year, but he’s no Tom Brady or Drew Brees. Smith needs the balance of the running game. Furthermore, he needs an effective run game to set up the play action, which the Chiefs used potently during their 5-0 start. CHIEFS If I were Charles Barkley; Chiefs -11

Cardinals at Texans
It’s amazing that nearly a decade ago Eagle fans were clamoring for the franchise to make a trade for Larry Fitzgerald. (Note: The Eagles should have done it.) Anyway, that was a million years ago and the 34-year-old receiver is still awesome. Fitzgerald is 3rd in the NFL in receptions, 7th in yards and 4th in targets. Did I mention he ranks as an all-timer despite never playing with an elite level QB at any point in his career? (You can count Kurt Warner’s 2008 throwback campaign if you’d like. I probably wouldn’t argue, but it’s not a Brady or Rodgers-esque season.) TEXANS If I were Charles Barkley; Texans -2

Bills at Chargers
The stories about Tyrod Taylor being benched due to race are… something. I lived in Rochester, NY for four years. The Bills rule that area. No one thought Taylor was any good. Watch enough Bills games and you’ll see pretty quickly Taylor is a fine quarterback, but he’s not anywhere near “good.” People LOVE throwing out his QBR and other metrics when assessing a quarterback. They also LOOOOOVE when a quarterback doesn’t throw interceptions. Not throwing interceptions doesn’t make someone a good quarterback. A lot of guys can play in the NFL and not throw interceptions. Often times, their production reflects as much. Interceptions are the risk associated with big plays. Good quarterbacks make big plays and avoid the interceptions. Avoiding interceptions isn’t worth anything if you also can’t make big plays. Taylor never threw for more than 3,000 yards in a season, so he clearly wasn’t producing big, winning plays. He also hasn’t gotten any better since his first year as a starter in 2015. His record is a respectable 20-18. I’m not arguing he stinks or the Bills mediocrity over his time there was his fault. It’s not. I just don’t like how quarterbacks are praised endlessly based on metrics when they clearly don’t pass the eye test to anyone that’s watched them over multiple seasons.

Anyway… Want an illustration of how bad the AFC is this season? Outside of the four division leaders, there’s only one AFC team coming off a victory heading into the weekend (Oakland). Furthermore, over half of those 12 teams are riding multi-game losing streaks. The Buffalo Bills have lost two in a row and remain in the final Wildcard spot. With a victory Sunday, the Chargers would find themselves only a game out of the playoffs. The NFC playoff race will be a fascinating battle consisting of really good teams. The AFC playoff race will be the equivalent of drunken kids racing after spinning around face down on a whiffle ball bat. And it’ll be awesome. CHARGERS If I were Charles Barkley; Chargers -3

Bengals at Broncos
Like I just said, the playoff race extends anywhere in the AFC except Cleveland. Both of these 3-6 messes are still very much alive. Unfortunately we won’t be able to say the same for Marvin Lewis’ career in Cincinnati after a few more losses. BRONCOS If I were Charles Barkley; Broncos -2.5

Patriots at Raiders
New England isn’t as good as their record. 7-2 is more a product of the terrible conference than how good they really are this year. Regardless, it’s amazing that yet again the Patriots have climbed above the injuries and a lousy defense to be one of the favorites to reach the Super Bowl. Considering their remaining schedule, anything below 12-4 is highly unlikely, giving Bill Belichick his 15th consecutive season of at least 10 wins. Amazing. PATRIOTS If I were Charles Barkley; Raiders +7

Eagles at Cowboys
In 2016 the 4-2 upstart Eagles found themselves in Dallas leading the 5-1 Cowboys by 10 in the 4th quarter. A Wendell Smallwood fumble near midfield flipped the game – and the Eagles entire season – on its head. The Eagles would go on to lose in overtime and drop six of their next seven games. What once looked like a possible Wildcard team fell apart. I said it then and still believe now the Eagles season did a 180 on that fumble. Fast forward a year and the Eagles are the hands-down favorite to represent the NFC in the Super Bowl. To put it lightly, the city of Philadelphia is feeling itself. But true Philly fans are skeptics. We know the toughest tests lie ahead. Three of the Eagles next four games are against playoff caliber teams. Only two of their first nine were of the sort. Did I mention all three are on the road? There’s no doubt the Eagles are good, I’m just not sure how good. While the 2017 Cowboys aren’t on the same level as the 2016 version, they’re desperate. A loss Sunday could end their season and would certainly put the NFC East out of reach. A Wildcard berth wouldn’t be much more attainable as Dallas already has losses to Atlanta, Green Bay, and Los Angeles (Rams); three teams Dallas could be vying with for a playoff spot. This all makes the decision to play Zeke Elliott to start the season more foolish. I argued with Cowboy fans that they should have sat Zeke out of the gate, suffered through the early stages of the season and welcomed him back for the playoff stretch. Instead, Zeke played early, was out of shape, and Dallas started 3-3. The Cowboys probably could’ve started 3-3 without Zeke. Now they’ll be forced to win without their all-pro running back, without their all-pro left tackle, and with their backs against the wall against what many believe to be the NFL’s top team. Good luck. EAGLES If I were Charles Barkley; Eagles -5

Falcons at Seahawks
I’m not 100% sure, and I really don’t know anything, but I think Atlanta found its groove last week. They looked more like the 2016 NFC Champions than they have at any other point this season. We’ll know for sure Monday night on the road against an injury depleted but always tough Seattle team. While both Seattle and Atlanta remain very much in contention for their respective divisions, the victor here will hold a significant edge when it comes to playoff tie-breakers. An Atlanta victory (paired with the Dallas win last week) would all but guarantee them a postseason berth thanks to tiebreaker advantages if their record stays competitive. IF being the big word there. Atlanta’s remaining schedule is no cupcake. They still have to host Minnesota, New Orleans and Carolina and have a visit to New Orleans as well. That’s a combined 28-9 record standing between the Falcons and the playoffs. Yeesh. FALCONS If I were Charles Barkley; Falcons +3