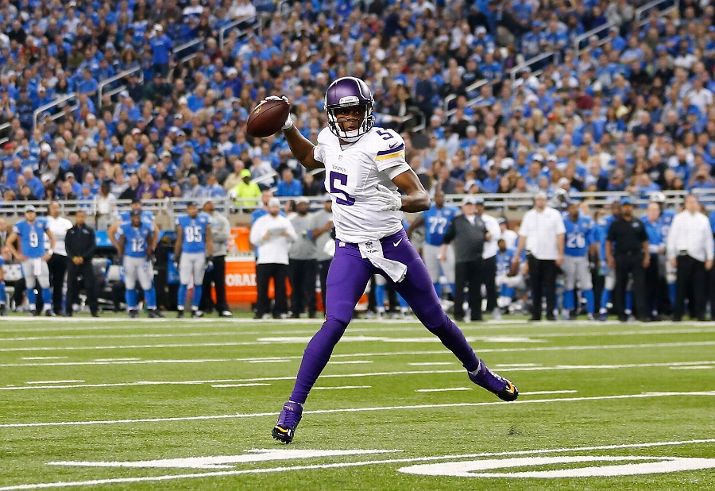 How much does your team love its quarterback? (Photo by Leon Halip/Getty Images)

Green Bay Packers
I think this one is pretty obvious. Aaron Rodgers is really, really good.

Indianapolis Colts
For the 2nd year in a row, Andrew Luck dragged a bad Colts team to an AFC South title. He’s only 25.

Seattle Seahawks
Some argue he’s stepped back this year. While his numbers are down, he’s looked pretty darn good since the Seahawks kicked it into gear. Wilson’s also better than anyone else in the league at escaping pressure.

Denver Broncos
Peyton Manning’s age is on the only thing keeping the Broncos out of the Head Over Heels division. As great as Manning is, there will be a day in the near future when he is no longer around.

Dallas Cowboys
Tony Romo used to be a disaster; prone to mistakes and backbreaking turnovers. Not anymore. Romo is a bonafide elite NFL quarterback.  He’s also one of only a handful of guys with at least 20 more touchdowns than interceptions this season.

San Diego Chargers
Philip Rivers looked finish a few seasons ago. He turned back the clock last season and re-established himself as one of the league’s best. Rivers followed up his resurgent 2013 campaign with another excellent season in 2014.

Atlanta Falcons
Matt Ryan is a fine quarterback. However, if you ask Falcon fans how they feel about Matty Ice, their responses are usually indifferent or negative. Much of that may be a result of his underwhelming 2013 season. But with a new coach on the horizon, I think Ryan will emerge as a top tier QB.

Carolina Panthers
It’s been a nightmare season for Cam Newton. He began the year injured in training camp and has been hampered ever since. His offensive line has been a disaster. He’s adjusting to new receivers. Newton even fractured his back in auto accident. Despite the year from hell, Newton and the Panthers aren’t looking to separate. Nor should they.

Pittsburgh Steelers
Ben Roethlisberger and Todd Haley appear to have finally found a groove. For the first time in my lifetime, the Steelers success depends on Roethlisberger and the offense. At 32, Roethlisberger is on pace to play a full season for the 2nd consecutive season (first time since 2009). He’s also in the midst of his best statistical season since 2007 and possibly even the best of his career.

Baltimore Ravens
Joe Flacco isn’t flashy. He is reliable, though. And after a disappointing 2013 season, Flacco has rebounded nicely. He’s on pace to finish with the fewest turnovers of his career and his completion percentage is a career best.

Love Each Other, But Not In Love

Detroit Lions
The absence of Calvin Johnson throughout the season has somewhat exposed Matthew Stafford as a franchise QB. While talented with a cannon for an arm, Stafford has yet to prove he can consistently carry a playoff contender. In fact, he’s been downright bad at times over the past two years. On the other hand, Stafford will enter the 2015 season (his 7th) at the ripe old age of 27, so there’s reason to hope he can return to his breakout 2011 season form when he threw for over 5,000 yards and tallied 41 TDs.

Miami Dolphins
Ryan Tannehill can’t throw the deep ball and it greatly limits Miami’s offense. In today’s NFL, the deep ball is as critical as the blind side tackle.

Cincinnati Bengals
Andy Dalton got a new contract in the offseason that made it look like he was the future of the franchise. But really, it was just a bunch of money up front with no long-term obligation. Good thing, too, because Dalton’s current season has been his worst as a pro.

Arizona Cardinals
Arizona gave Carson Palmer a big contract extension that essentially guaranteed him the job in 2015. Palmer then blew out his knee within a week of signing the deal. Quarterbacks off a midseason ACL tear rarely come back strong the following season. The Cardinals may find themselves in a pickle in 2015.

Minnesota Vikings
Teddy Bridgewater should enjoy the honeymoon infatuation stage while he can. And so should the Vikings front office. It doesn’t last long…

Jacksonville Jaguars
…Just ask Gus Bradley and Blake Bortles. Bradley is in his 2nd season as Jacksonville’s head coach and Bortles hasn’t even finished his rookie campaign. Both are already getting heat. In fairness to both Bradley and Bortles, anyone who thought Jacksonville could be turned into a playoff contender in anything less than four years is crazy.

San Francisco 49ers
The 49ers dropped from the Head Over Heals division to here in less than four months. That’s a new record. If you’ve watched Colin Kaepernick play this season you know exactly what I’m talking about. Compare Kaepernick’s recent play to any one of his spectacular playoff performances and you’ll be as confused as San Francisco’s coaching staff.

New York Giants
Eli Manning is a New York Giant legend, and rightfully so. His postseason performances of 2008 and 2012 were epic. Many would argue those days are gone, though. I don’t totally agree. With the emergence of Odell Beckam Jr. and the rest of the Giants young receiver corps, Manning has actually had a nice season. In fact, it’s been his best since that 2011 title-winning season.

Chicago Bears
Jay Cutler has a really big contract and not many people in his corner. That’s a bad spot to be in for both Cutler and the Bears. Also, when you’re benched for Jimmy Clausen your season has gone horribly, horribly wrong.

Kansas City Chiefs
Alex Smith also signed a new contract within the past year. Maybe I’m wrong, but I find it hard to believe the Chiefs are totally happy with a quarterback that has yet to throw a touchdown pass to a receiver in 2014.

Buffalo Bills
Poor Buffalo. While they could opt to remove themselves from Kyle Orton in the offseason, it’d require the Bills to swallow about $1.5 million in dead money. Buffalo’s defense is good enough to compete right now. Given the explosive talent of Sammy Watkins, it might be wise for Buffalo to bite the bullet and find someone capable of getting Watkins the ball.

St. Louis Rams
If you’d like to know why the NFL changed the rookie wage scale during the last lockout, Sam Bradford is the perfect example. Bradford will enter his 6th season as a pro in 2015. In 49 starts, Bradford is 18-30-1. He’s set to make $16.5 million next year. Maybe the Rams give Bradford another shake after a knee injury cost him the 2014 season. However, I’m sure another season in St. Louis would require Bradford to rework his massive contract.

Cleveland Browns
I’m sure the Browns thought/hoped they’d be in the Perfect Shiny and New division. Sadly, things haven’t worked out that way and the franchise can’t be thrilled with their 2015 outlook considering the QB depth chart. Johnny Manziel was a disaster in his first start. Brian Hoyer fell off the map after a nice start and isn’t likely to return. Do they find a veteran to compete for the starting job or roll the dice and let Manziel grow into the role? Trusting Manziel to develop would cost me plenty of sleep.

Oakland Raiders
Derek Carr showed flashes of promise this season. I’d bet Oakland proceeds with Carr as the franchise quarterback. Though, depending on where the Raiders end up in the draft, they could fall in love with Jameis Winston or Marcus Mariota and have the pick to snag one of them.

Tampa Bay Buccaneers
Neither Josh McCown nor Mike Glennon did anything to prove they deserve the Buccaneers starting job in 2015. Unfortunately, both are under contract in 2015, though the Bucs could part ways with one or both without significant cap ramifications.

New York Jets
I think Geno Smith’s time as a starting quarterback has come to end. It’s been a fun ride.

Philadelphia Eagles
For better or worse, the Eagles are wide open at the quarterback position heading into 2015. Foles could be cut for pennies, though I’d be surprised if the Eagles didn’t bring him and his cheap contract back to at least function as a backup/security blanket. Anyway, it’ll be interesting to see where Chip Kelly goes here. My only hope is he doesn’t sell the farm to move up in the draft.

Houston Texans
The Texans aren’t as open to mingle as the Eagles or Titans but they do have some flexibility if they want it. Ryan Mallet is gone and Ryan Fitzpatrick could be shown the door if need be. 2014 4th round pick Tom Savage will be back if the Texans want him, but they could look elsewhere in the draft, too.

Tennessee Titans
With Jake Locker and his injuries off the books, Ken Whisenhunt can finally go out and find his own quarterback. If the Titans don’t screw up in the final weeks, they may have their pick of the litter in the 2015 NFL Draft.