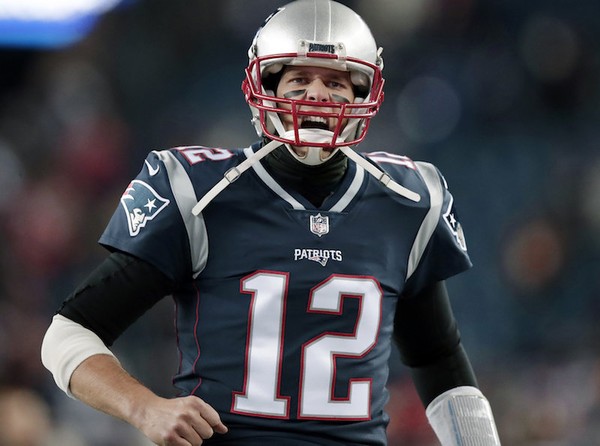 Five time Super Bowl champion Tom Brady is the greatest of all time, but he’s struggled against the NFC East with a ring on the line. Can the Eagles keep it going? (AP Photo/Charles Krupa)

The Super Bowl is a two-week hot take fest. Every angle of the game has been discussed ad nauseam. Each advantage has been dissected and debated. You’re not going to learn anything new here, so with that in mind, allow me to share my most important thoughts and then we can all go about dreaming about that parade down Broad Street.

1. Brandon Graham will be the difference if the Eagles are able to slow Tom Brady and the Patriot offense. Bill Belichick and Josh McDaniels will undoubtedly pinch down to limit pressure from the Eagles stellar interior duo of Fletcher Cox and Timmy Jernigan. Everyone knows you beat Brady by getting pressure up the middle. The Patriots will direct their blocking schemes to limit that damage. By doing so, that’ll often leave Graham on an island with a tackle or better yet, a tight end. Graham is one of the NFL’s most underrated players. His sack numbers aren’t crazy but he disrupts more plays than any other defensive lineman, including Cox. Graham is a monster. It’s likely he’ll be all up in Brady’s eyeballs. That’ll force the Patriots to adjust and keep Rob Gronkowski in to block or move lineman off of the interior, thus freeing Cox up. The Eagles defense is a terror. If they can generate consistent pressure with four throughout the game, the Patriots will be in trouble.

2. New England’s short passing game will be the Eagles undoing if they can’t get to Brady. Brady is more decisive than Matt Ryan and better at locating the open man than Case Keenum. Pressure will take away Brady’s ability to move through his progressions. Slow pressure means Brady will have time to pick apart the Eagles greatest defensive weakness; linebackers in coverage. Whether it be Dion Lewis, James White, Rob Gronkowksi or Danny Amendola, the Patriots will work to get pass-catchers matched up against linebackers. This is essentially what the Giants did in Week 15 when they torched the Eagles over and over again with no name receivers. While I don’t expect the Eagles to tackle as poorly as they did against the Giants, I do believe this will be the Patriots most effective way to move the football. It’ll also set up the Eagles aggressive secondary to bite and allow big plays deep later in the game.

3. The Eagles are made to defeat the Patriots. They generate pressure without blitzing. They tackle well. They’re balanced offensively and can control the game and thus limit Brady’s opportunities. They also have a fearless coach, which is probably the most important factor. Doug Pederson won’t take his foot of the gas. He’ll take chances, go for it on 4th down and force the Patriots to beat his (in my opinion) more talented football team. He won’t lie down for them.

4. Three weeks ago I was confident the Eagles would lose to the Atlanta Falcons. Thanks to a Julio Jones slip and Mychal Kendricks’ stellar effort behind the play, the Eagles held on and advanced to the NFC Championship. I didn’t like their chances against the Saints, but a miraculous game-winning touchdown by Stefon Diggs punched the Minnesota Vikings ticket to Philadelphia. I believed the Eagles had a shot to advance to the Super Bowl because I thought their defense could smother Minnesota’s offense, especially Case Keenum. I was still hesitant to pick the Eagles, however, and ultimately took the Vikings. I tell you all this because I don’t know what to do about my feelings this week. The Eagles are 2-0 when I pick them to lose. I care way more about the Eagles winning than I do about being right. People kept calling and laughing that I was wrong when the Eagles advanced. Uhhhh, I’m an Eagles fan. I feeling nothing but joy when the Eagles win (except maybe during the Chip Kelly era). I need to do right by my people here. It’s not about me. I believe the Eagles will do that thing where they earn the letter found between “V” and “X” but I can’t in good conscious mess up a good thing. Therefore, with all my heart, I am picking Tom Brady, Bill Belichick and the New England Patriots to win Super Bowl LII. PATRIOTS If I were Charles Barkley; Eagles +4.5