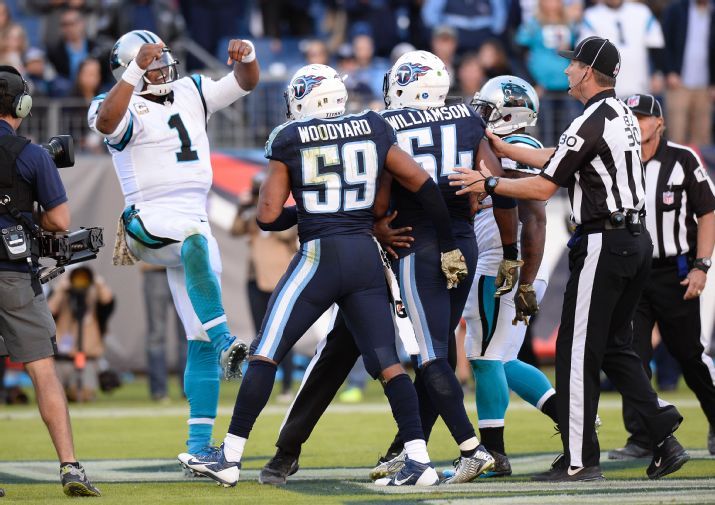 Cam Newton danced too long. JJ Watt made a bad joke. Carson Palmer thrust his pelvis. If you’re offended, you are the problem. (AP Photo/Mark Zaleski)

Let me preface with this, I don’t necessarily approve of any of the aforementioned acts. Tim Duncan is one of my favorite athletes of all time. The next time Duncan does or says something provocative will be the first time. I generally like the quiet, humble athlete who doesn’t take himself too seriously. But that’s me. With that said, none of the “controversial” events of Week 10 offended me because being offended is stupid. (I apologize if that offends you.)

When you’re offended, you’re admitting someone else’s actions impact the way you feel about something; a belief, a person, whatever. It shouldn’t. Belief is about confidence. I know what I believe. Someone acting or speaking in opposition to that belief doesn’t change my beliefs, so why would it impact me? When people’s beliefs are challenged, they often respond with outrage. This stems from insecurity. If you truly believe in something, a challenge from an opposing view is either an opportunity for debate or white noise. The choice is up to you. An opposing view only becomes an attack if you make it one.

For example, Cam Newton danced excessively after scoring late in the 4th quarter against the Titans. Showboating isn’t my forte. As I mentioned, I prefer the, “do your job and move on” athlete. I laughed when I watched Newton’s dance routine. Though it was unnecessary and arrogant, I didn’t walk away believing my life was somehow impacted because Newton wanted to “dab on them folks.”

When you have kids you’ll understand.

I have kids. Three of them, in fact. And you know who’s supposed to be their role model? Not Cam Newton. The letter a concerned mother wrote the Charlotte Observer epitomized the sad state of our society in many ways. The highlight of the letter was the mother’s response to her daughter’s questions about Newton’s behavior, “I didn’t have great answers for her.” Hey, lady, it’s pretty simple. You tell your kid, “That guy is acting like an idiot. Some people do that. It’s not acceptable behavior for you.”

It’s astonishing how wrapped up our society has become with what everyone else is doing. This person said this. That person did that. I am so offended. When did America adopt a victim’s mentality? No one is trying to ruin your life. Do you really think Carson Palmer had your sensibilities in mind while thrusting his pelvis into the brisk Seattle air? Of course not. You’re not that important. Get over yourself.

What we need to do is spend more time in our own heads. Think. Reflect. Figure out what’s important and live life accordingly. At that point, nothing on the outside will dramatically impact how you feel. Not even a coffee cup missing a Christmas tree.