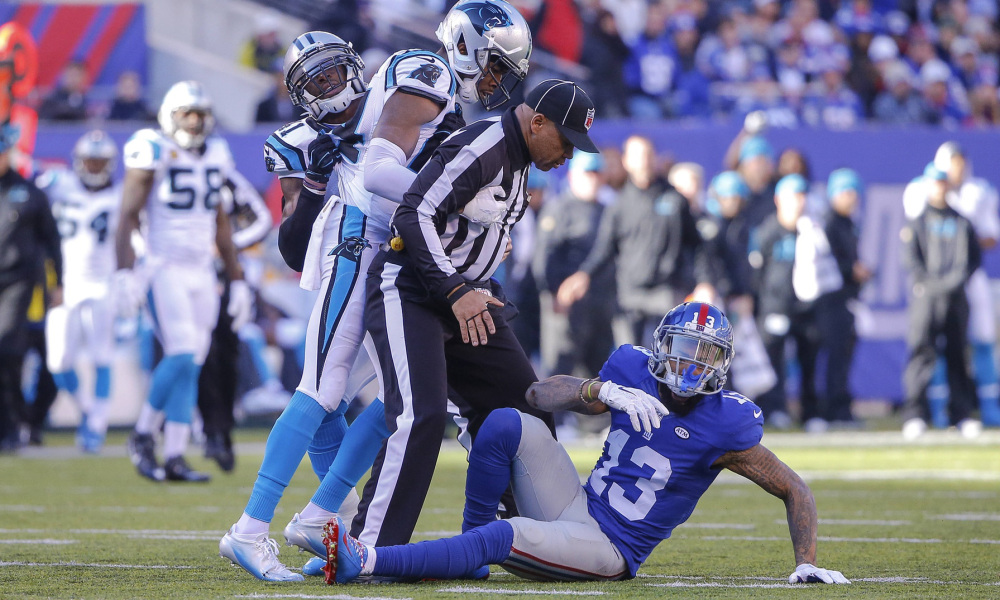 Odell Beckham dropped a sure touchdown and then threw a three hour temper tantrum.

Let’s start with Beckham’s punishment. First of all, he should have been tossed from the game well before he speared Josh Norman’s head. Beckham was punching, grabbing, and blind-siding Norman every chance he got. It was the most embarrassing thing I’ve seen on a football field. I understand superstars get calls, and I’m ok with that. However, leniency on pass interference or calling the game tighter against the defense is way different than allowing a player to run around the field in what looked like a cocaine-induced rage.

What happened to player safety? The NFL loves preaching about player safety. Quarterbacks can’t be touched anymore. A devastating hit on a receiver almost always earns a flag. Apparently safety rules don’t extend to defensive players? Norman was blatantly punched early in the 1st quarter. Soon after Beckham grabbed Norman’s chin strap and tossed Norman’s head around violently. Referees just watched and threw out “warnings.” I’ve heard the well Josh Norman talks too much excuse ad nauseam over the last 18 hours. Please. Talking isn’t a crime. Spearing an unsuspecting player in the head with your helmet is equivalent to assault. Beckham doesn’t deserve a game suspension. He should be suspended for the remainder of the season. If the NFL is truly serious about player safety, the league should suspend this jackass for more than a game.

If the NFL isn’t going to suspend Beckham, what does that tell coaches and players? Essentially, Defend your own guys. If football were hockey, Beckham would have been bloodied before halftime. If referees don’t take control of a hockey game, players regulate it themselves. The general public is appalled by this behavior but what happened yesterday doesn’t happen for an entire game in the NHL. Hockey players wouldn’t stand for it.

The Carolina Panthers kept their composure for the most part and didn’t attack Beckham. That was their mistake. The moment it became clear officials were going to allow Beckham to be a goon all afternoon, Ron Rivera should have taken matters into his own hands. Norman is one of Carolina’s best three players. Protecting Norman is the priority. Rivera should sent in a special teamer to blind side Beckham. Accept the ejection and force officials to recognize the chaos they permitted. Would it be right? No, but it would be justified. Just as justified as a two game suspension for Beckham and a public apology to Josh Norman and the Carolina Panthers from the NFL.