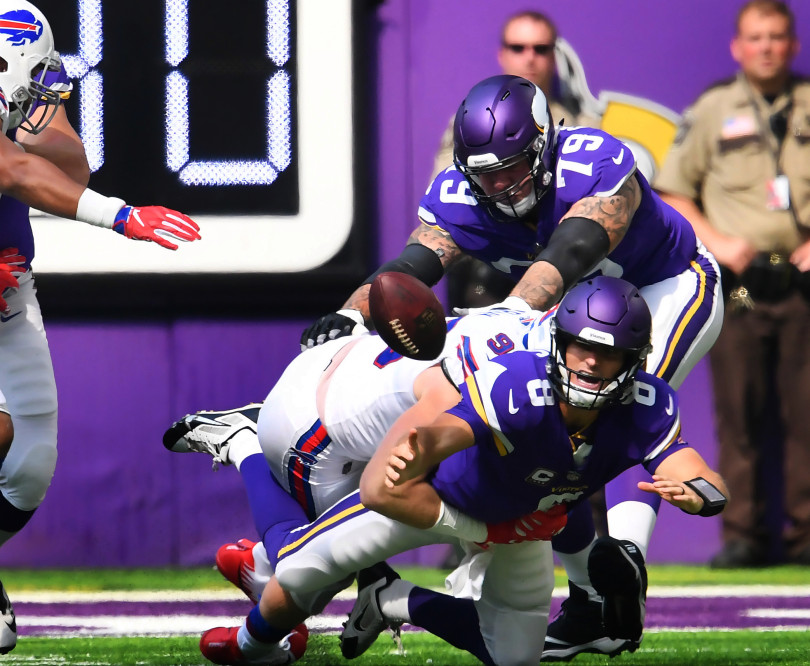 Kirk Cousins has been fabulous at times and nearly incompetent at others. Just more of the same from the enigmatic Cousins (Photo by John Autey/Pioneer Press)

Vikings at Rams
There’s a reason Kirk Cousins was available this past offseason. The Washington Redskins TWICE gave Cousins nearly $20 million per year on “prove it” deals. Over those two seasons Washington paid Cousins just under $44 million and then, despite such a huge investment already, decided, “nah, we’re good.”

Cousins is a fine quarterback. One could easily argue he belongs in the top half of the NFL’s signal callers. Maybe even the top ten. Whatever he is, Cousins’ play doesn’t equate to a plethora of wins. In his three seasons as the starter in Washington, Cousins’ record was an underwhelming 24-23-1. He led the Redskins to an NFC East title in 2015 (albeit with a 9-7 record), lost in the Wild Card round and never returned to the postseason. One week he’s Joe Montanta, the next he’s Mitch Trubisky.

In Week 2 Cousins should have clinched a Green Bay win with his 2nd interception in as many throws. A questionable roughing the passer call gave Cousins a 2nd chance. This past week against Buffalo, Cousins coughed up the football twice in the first ten minutes and didn’t surpass 150 passing yards until midway through the 4th quarter with his team already trailing 27-0. By the 2nd quarter, it was quite obvious Cousins wanted no part of a Buffalo defense that pummeled him time and again.

Which brings us to tonight’s matchup. The Rams boast one of the most disruptive front lines in football. LA’s pass defense ranks among the best in total passing yards, QB rating against, and leads the NFL in passing touchdowns against (2). Despite the likelihood of the Rams missing their top corners, I don’t trust Cousins to stand in the pocket and make the throws necessary to keep pace with Los Angeles’ high octane offense.

What Cousins needs is a running game. The Vikings own the 2nd worst ground attack in the NFL, totaling only 198 yards in three games. Their 3.5 yards/attempt won’t keep a defense honest. Dalvin Cook has not bounced back from a knee injury (yet) and Latavius Murray has been mostly unimpressive through three games. Minnesota has one of the strongest receiving units in the league but talent on the outside doesn’t mean much if the quarterback can’t deliver the ball.

I think Los Angeles is vulnerable here as they could be without their top two corners. However, taking the Vikings would require trusting Cousins. I’d prefer not doing that. (This line feels like an overreaction to Minnesota’s loss to Buffalo. It’s too high.) RAMS If I were Charles Barkley; Vikings +7