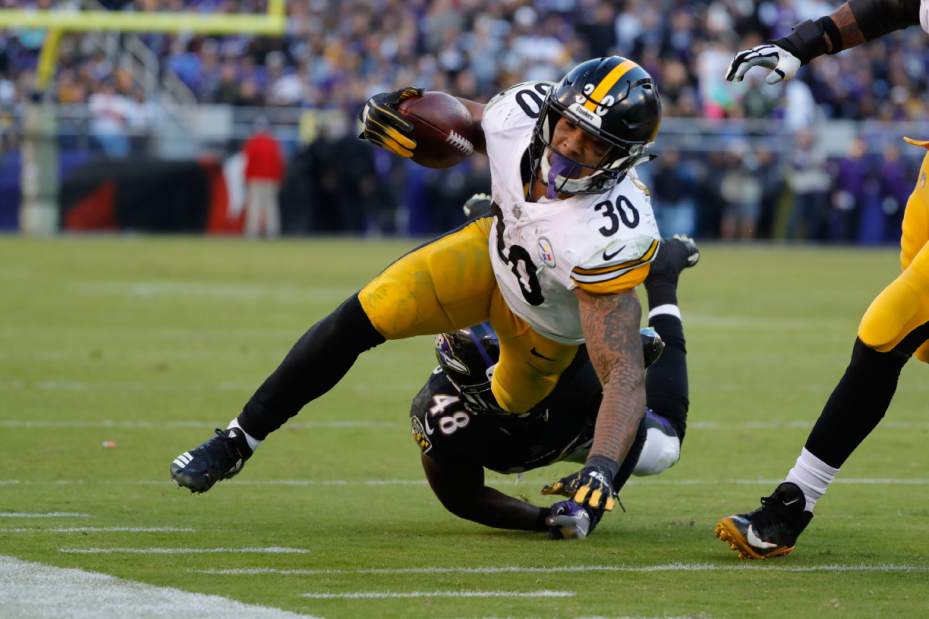 James Conner has been fabulous for the Steelers while Le’Veon Bell continues his holdout. What happens next will be fascinating. (Photo by Getty Images)

Le’Veon Bell is an unquestioned playmaker. He’s been one of the NFL’s most productive players over the last five seasons. He’s perhaps the most versatile running back in the NFL. He also may have misplayed his hand… badly.

I’m not arguing Le’Veon Bell isn’t a great player or that he doesn’t deserve to get paid. He is great, and he deserves a hefty paycheck… but there’s evidence he’s as much the product of an offense as the offense is a product of him. Let’s look at the numbers.

Bell’s average per game stats dating back to the 2014 season:

Just for the sake of it, let’s also look at Steven Ridley’s stats when he replaced Bell in a meaningless game at the end of the 2017 season

As for 2018, one could argue James Conner is the head of Pittsburgh’s 4th ranked offense. Antonio Brown’s impact has fallen off a bit and the offense goes as Conner goes. Here are his per game stats in Bell’s absence this season.

Look at those numbers. Obviously, you can eliminate Ridley’s one game performance, but Bell, Williams and Conner all produced nearly identical numbers over a reasonable stretch of games. Why does this matter and how could it impact Bell’s offseason?

Well, until Todd Gurley signed his new deal over the summer, NFL running backs haven’t been offered lucrative deals like quarterbacks, premier defenders, stud left tackles or even game-breaking wide receivers since Shaun Alexander’s deal in 2006 blew up in Seattle’s face. Whether there will be a competitive market for Bell remains to be seen. However, if I’m a team interested in Bell, I very politely slide a piece of paper across the desk to Bell’s agent demonstrating the success of an aging Williams and a 3rd round pick in that Steeler offense. Maybe they walk away, maybe they lower their asking price, maybe nothing changes. Either way, Bell’s holdout this season hasn’t helped his offseason leverage in any way. Given the aforementioned statistics, it’d be easier to argue the holdout has hurt him more than helped.

Let’s  not forget, before Bell’s agent even has a chance to entertain deals, his client will have to return to the Steelers. That could get interesting. Bell has alienated coaches, players and most importantly, the majority of his offensive line. Given Conner’s production, what incentive does Pittsburgh have to put Bell back into the offense? He’ll only poison that locker room and continue his dissension, but this time from within the locker room. At this point, I’d give Bell the 2005 Terrell Owens treatment and pay him to stay away.

As for the game, I decided a week ago the Panthers would win because the Steelers would only be three days removed from a divisional road game against their bitter rival. However, if you watched Pittsburgh’s win over Baltimore last week, you’d know it wasn’t the intense, violent gladiator battle we’ve come to expect from the top of the AFC North. The game never felt in doubt after the Steelers went up 14-3 early in the 2nd. Furthermore, there’s little proof the Panthers are a good road team. They trailed Atlanta by 14 in the 4th quarter in Week 2 and lost. In Week 6 they trailed Washington by 11 in the 4th and eventually lost. A week later, Carolina found itself trailing 17-0 in the 4th quarter and of course came back to defeat the Eagles. To recap, the Panthers haven’t distinguished themselves as road warriors just yet. STEELERS If I were Charles Barkley; Panthers +3.5