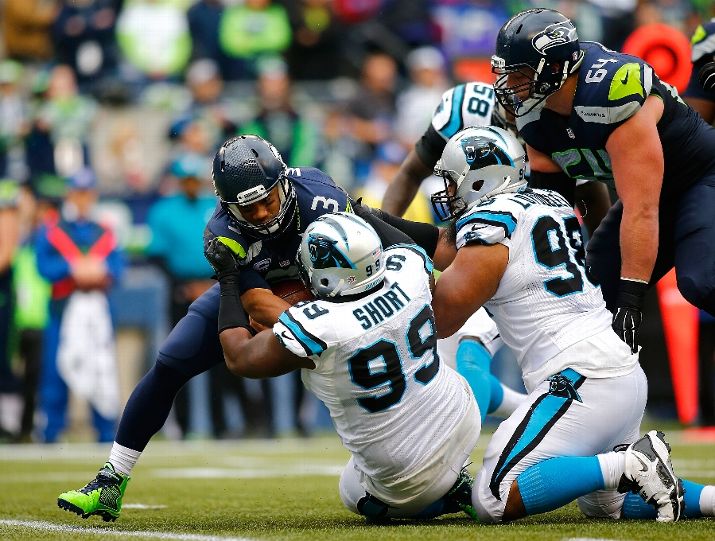 The Seattle Seahawks are 2-4. Is it just another slow start, or is this the beginning of the end? (Photo by Jonathan Ferrey/Getty Images)

Seahawks at 49ers
Through six weeks the defending NFC champions look offensively challenged. Even the defense has looked overmatched at times. A slow start from Seattle isn’t new. They started the 2014 season 3-3 before winning nine of their final ten regular season games and coming within a yard of back-to-back titles. However, there are areas of concerns through six weeks of the 2015 season that weren’t there a year ago.

First of all, the offensive line is atrocious. For a quarterback as elusive as Russell Wilson to lead the NFL in sacks is almost unbelievable. Though the line has been bad, there’s plenty of blame to share. It feels like we repeat this every year, but once again Seattle’s receivers are not getting open. There just isn’t enough talent on the outside for Wilson to find open receivers in the limited time he has to scan the field. Wilson’s also developed happy feet as a result of the constant pressure. There are at least a handful of times per game when Wilson abandons the pocket without pressure. A bad offensive line is one thing, but when you combine it with average to below-average receivers and a jumpy quarterback you get a catastrophic mix. The line is unlikely to improve this season, and the receivers won’t evolve into Julio Jones, so it’ll be up to Wilson to make due with what he has. Last week it appeared the Seahawks finally figured out that Jimmy Graham doesn’t need to be wide open to get the football. Throw it in his direction as often as possible and good things happen. A more consistent ground game certainly wouldn’t hurt, either.

Then there’s the defense. The celebrated Legion of Boom has been bust more often than not dating back to last season’s playoffs. As FOX illustrated Sunday, the Seahawks have blown 4th quarter leads in their last five losses. Generally, 4th quarter leads are lost via poor pass defense. The Seahawks have invested over $100 million in that secondary. For them to squander five 4th quarter leads – including a Super Bowl title – is discouraging, to say the least. The pass rush is also contributing less than expected. It’s hard to ignore the fact that two key players on that defense are unhappy with their contract situation. Pat Riley always talked about the “disease of me” after teams win championships. Players start to care more about themselves – contract situations, stats, playing time, etc… – over winning. Perhaps the Seahawks are infected.

At 2-4, Seattle can’t afford another division loss if they hope to win the NFC West for the 3rd year in a row. The 49ers are significantly weaker than the teams featured in the NFL’s most heated rivalry of recent years. In fact, that rivalry has likely faded away. Still, the 49ers have proven themselves a competitive team after a disastrous September, so the Seahawks better play as if the 2012 49ers are on that field or Seattle will find itself in a 2-5 hole. SEAHAWKS If I were Charles Barkley; Seahawks -6.5