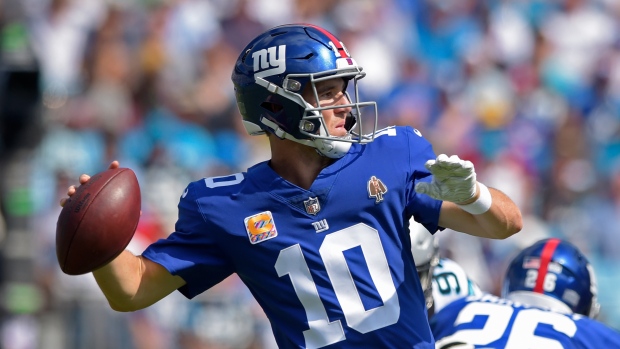 Disrupting Eli Manning will be important to the Eagles success Thursday night. In fact, it may be even more critical than you think. (AP Photo/Mike McCarn)

Eagle fans enter Thursday night absolutely terrified of what Beckham may do to Jalen Mills and the Philadelphia secondary. All the drama and antics aside, Beckham is perhaps the league’s best receiver outside of Michael Thomas in New Orleans. The Eagles secondary could be in for a long, long night. There is hope, though.

Remember a few weeks ago when I compared the Giants 1st half in Houston to their 2nd half? The Giants scored on all four 1st half possessions and racked up 268 yards. Manning was sacked only once and had all kinds of time. In the 2nd half, JJ Watt planted himself in New York’s backfield. The Giants totaled 30 yards on their next four possessions before finally scoring on their final drive. Manning did much of the same last week in Carolina. When afforded time, he picked apart the Panther defense.

The Eagles must pressure Manning effectively and continuously. Contrary to public belief, the Eagles defensive line is performing at the same level they did a year ago when they sacked opposing quarterbacks 5.9% of the time (5.7% this season). In fact, according to Sheil Kapadia, the Eagles pressure percentage is slightly up from last year. Fair or not, it will be up the Eagles front four to keep the Giants passing game in check.

This is obviously easier said then done, even with Derek Barnett likely to play. In two matchups against the Eagles last season, Manning threw for 800 yards and 6 touchdowns. Those were the only 3-touchdown games Manning had in 2017. If you add up his two highest outputs from last season outside the two Eagle games, they’d add up to 536 passing yards. This is not a joke. That’s a 250+ yard difference. Manning has, and will destroy the Eagles if they do not harass him in the pocket.

Of course, the Eagles offense will have a say in Thursday’s outcome as well. Despite Manning’s performances last season, the Eagles still found a way to win both games, and one was without Carson Wentz.

Perhaps the most surprising thing about the Eagles season thus far is that their best and most consistent player (ok, outside of Fletcher Cox), is the guy coming off an ACL injury. Over the last two weeks Wentz has been nearly flawless. I won’t hold the two sack fumbles against him because they were both devastating hits from the blind side. Wentz has moved the Eagles offense without a running game and without a deep threat.

I think the biggest limitation to the Philadelphia offense right now is not being able to stretch the field. Mike Wallace was supposed to come in and be that guy but he never had a chance to play with Wentz. Whether he returns from IR later in the season is up in the air. It’s a role the Eagles should work tirelessly to fill, though, and not with Shelton Gibson.

Torrey Smith dropped a lot of deep balls last year, but you know what, at least he was able to get open. Defenses were forced to respect Smith’s existence 35 yards downfield, even if he often failed to catch the ball. The Eagles have no one open beyond 20 yards this season and it’s making it harder for Wentz to find open receivers quickly. There’s too much congestion when a defense doesn’t fear you taking them over the top. Just ask Odell Beckham. EAGLES If I were Charles Barkley; Eagles -3