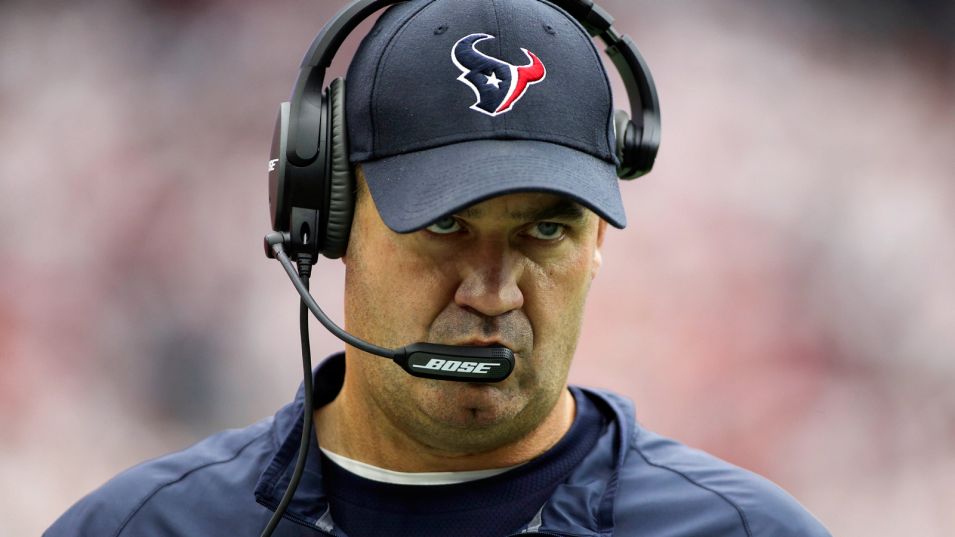 Bill O’Brien’s rebuilding project in Houston has stalled. What’ll it take to jumpstart it? A quarterback. (Image from FOX Sports)

Colts at Texans
Bill O’Brien needs a quarterback to reach the next stage of building the Houston Texans into a perennial contender. With the 1st overall pick in the 2014 NFL Draft, O’Brien went with the consensus top player in Jadeveon Clowney. It was the right pick. It still is. Though the Texans were clearly in need of a franchise quarterback, there were no obvious choices in the 2014 draft. O’Brien looked elsewhere in finding a quarterback by trading for New England’s Ryan Mallett.

Up to this point, O’Brien’s efforts at finding a quarterback have failed. In 2014 Ryan Fitzpatrick started 12 games. Case Keenum and Ryan Mallett each started 2. Even Tom Savage saw some time under center. Despite the lack of a solid quarterback, the Texans still clawed their way to 9 wins behind an elite defense, barely missing the playoffs after closing the season by winning four of their final five games.

In 2015, O’Brien brought in another Patriots castoff in Brian Hoyer. Hoyer won the starting job but was replaced after one half. Mallett was again the starter. There’s an old saying in the NFL; if you have two starting quarterbacks, you have none. The Texans have none.

Injuries haven’t been kind to Bill O’Brien and the Texans either. Clowney missed most of his rookie year due to a knee injury. Arian Foster, the key cog in Houston’s offense, has been in and out of the lineup for two years. The only constant in Houston has been the defense, and even that has declined in 2015.

In 2014 the Texans averaged 2 takeaways a game. Through four games in 2015, they have 2 total. Houston’s sack numbers are also down, and they’re currently surrendering over a touchdown more per game than in 2014. Obviously, this isn’t all on the defense. Houston’s offense is on pace to finish with 10 more turnovers than it did a year ago. A ground game that finished 5th in the NFL in 2014 has dropped to 21 in 2015. Even time of possession has swung significantly.

While a franchise quarterback won’t fix all of Houston’s problems, it’ll certainly benefit the team in myriad ways. At this point, O’Brien and the Texans must decide how to get that franchise QB. A loss against the Colts Thursday would essentially seal Houston’s 2015 fate. Their schedule is so daunting that even a 2-3 start is unlikely to save their season, but a 1-4 record is a death sentence. Should O’Brien battle for a six or seven win season or does he creatively steer his team to a dismal season with hopes of a top 3 pick? Teams don’t generally tank in the NFL, but with no long-term solution at quarterback in sight, O’Brien and the Texans are running on a treadmill for the foreseeable future. TEXANS If I were Charles Barkley; Colts +4