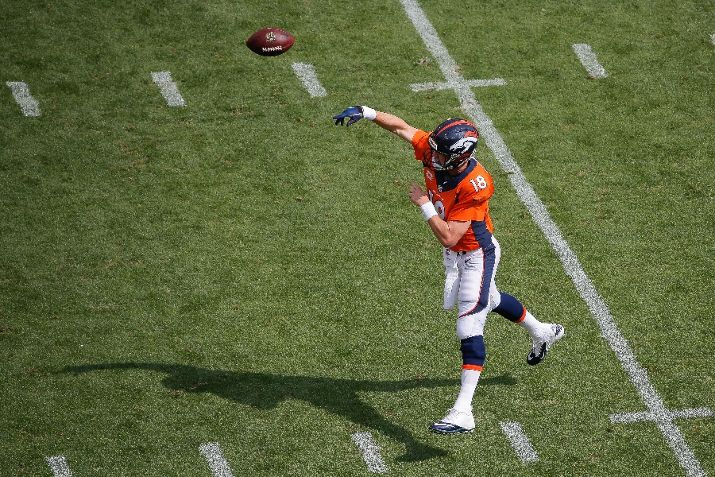 September Peyton Manning is supposed to be the healthiest, best-looking Peyton Manning. That was not the case in Week 1. Is this the end? (Photo by Doug Pensinger/Getty Images)

Broncos at Chiefs
At 39 years old, Peyton Manning’s decline is hardly surprising. It’s even expected. However, the abruptness and rapidity of decline is alarming. Beginning with his Denver debut in 2012 and continuing through Week 7 of the 2014 season, Manning’s QBR dropped below 70 only eleven times. Of those eleven outings, only three times did it fall below 50. As a reference point, Andy Dalton’s QBR throughout his four seasons in the NFL hovers somewhere in the low 50s. Philip Rivers’ 2014 QBR was 70.5. Essentially, Manning will play worse than Andy Dalton once every 13 games. At his advanced age, that’s remarkable. Even better, 70% of the time Manning is going to be an elite quarterback. At least that was the case until Week 8 of the 2014 season.

In the eleven games (playoffs included) since that time, Manning’s QBR has surpassed 70 only twice, even falling below 50 six times. He’s thrown 18 touchdowns to 13 interceptions. In the seven weeks prior he threw 22 touchdowns to only 3 interceptions. In 2013 his TD/INT ratio was 5.5/1. Even his completion percentage has dipped, dropping from 69% through Week 7 to 62.8% over his past 11 games. (His completion percentage in both 2013 and 2012 was 68%.)

Even the schedule offers no explanation for Manning’s decline. Over the first 7 games of the 2014 season, Denver faced three of the top seven defenses in the NFL (according to Football Outsiders). Over the next 11 games, Denver faced a top defense only twice (three times if you credit the 2015 Ravens with its 2014 ranking). Opponent record? Still no answers. Over the first seven weeks, Denver opponents totaled 64 wins and three playoff berths for an average of 9 wins per opponent. The next eleven opponents totaled 77 wins (87 if you credit Baltimore with its 2014 output) and produced four playoff berths (again, crediting Baltimore with its 2014 spot) for an average of 7 wins per opponent (8 if you credit Baltimore).

Age and health are the culprits here. Peyton Manning is fading and he’s fading fast. Manning has been an integral part of the NFL for over half my life. He’s a Sunday institution as much as DirecTV’s NFL Ticket. While I’m not ready for the NFL without Peyton Manning, it’s hard to watch this Peyton Manning. He’s too great to go out like this. Here’s hoping Manning has a little more fight left, because even Father Time takes one to the chin from time to time.

As for the game, Denver has yet to lose to Kansas City in the Peyton Manning era. On Week 1 appearance alone, it’d be easy to go with the Chiefs. However, after going up 27-6 in the 2nd quarter against Houston, the Chiefs did very little to impress me. Kansas City’s six 2nd half drives netted 82 total yards, five 1st downs and zero points. Whether the Chiefs ineptitude was because they took their foot off the gas or Houston’s defense got settled is debatable. I re-watched the game and thought both were true. Either way, Denver’s defense is superior to Houston’s. If it was December and the weather was a factor, I’d lean toward the Chiefs, but it’s September and supposed to be clear and 70 throughout the evening. BRONCOS If I were Charles Barkley; Broncos +3