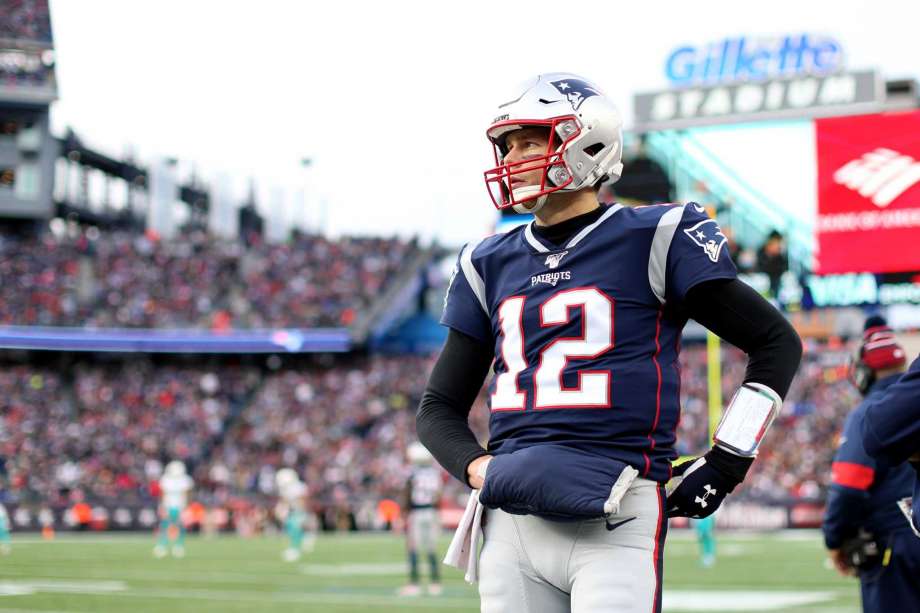 Is this the end for Tom Brady and the Patriots?  (Photo by Maddie Meyer)

[I had minor knee surgery a week ago and I’m behind on real life stuff, so I had to keep this shorter than normal. I apologize for giving you the wrong picks in 250 words instead of the usual 800.]

(5) Bills at (4) Texans
Houston’s offense smells a lot like Philadelphia’s. Houston loses almost all of its explosiveness when Will Fuller V is absent. The same has been true of the Eagles offense without DeSean Jackson. Like Doug Pederson, Bill O’Brien gets stuck in mud with his play-calling. Like Carson Wentz, Deshaun Watson can get sloppy at times and scuttle the offense. He’s prone to throw a few balls at the feet of open receivers or toss a head-scratching interception at the worst time. The Texans are a supremely talented team that struggles to maintain a playing level worthy of such talent. Meanwhile, the Bills are a scrappy bunch that seems to get the most out of their roster and are almost always playing at or near their ceiling. They don’t have the big name quarterback, star receiver or household name pass rusher, but they do have the 4th ranked pass defense and a quarterback that has shown flashes of brilliance in big games. Houston should win this game. They’re more talented, at home, and boast more playoff experience. However, Buffalo is better coached and has managed to play their best for a greater part of the season. I can’t trust Houston to do the same, especially if Fuller can’t go. BILLS If I were Charles Barkley; Bills +3

(6) Titans at (3) Patriots
The most obvious “I knew it” game of the weekend. Regardless of how it ends, every single one of us will say, “I knew it” at the final whistle. Titans run all over Patriots and advance. “I knew the Patriots were toast.” Patriots roll past Titans behind Tom Brady’s three touchdown passes. “I knew they would find a way.”

On paper the Titans are a problem, and not just for the Patriots but the entire AFC. They have a boulder running the football, a play-extending quarterback playing the best football of his life, and a rookie receiver capable of scoring every time he touches the football. But is that enough to overcome almost a quarter century of playoff dominance?

I don’t think it’s reckless to call New England’s offense desperate at this point. They want to run the football but can’t do so effectively. The receivers Brady trusts are either too injured (Edelman) or not explosive enough (Sanu) to be difference makers. For the first time in forever, Brady has no tight end the defense must worry about. So where does he go? It’s going to be N’Keal Harry. Slowly the Patriots have given him more opportunities in the offense. Brady doesn’t trust him yet, but at this point, he’s the offense’s only hope of getting yards in big chunks. New England needs big plays to open up the underneath game to James White. Without extending the field, White is neutered. Will it work? Uhhhh, I don’t know, but Harry is their last hope.

If I’m a Patriots fan I’m much more concerned about how New England’s defense folded last week with a playoff bye on the line. Was it a fluke or has the season caught up to them? Ryan Tannehill grew up and flunked out of the AFC East, so I doubt he has any fear of going into Gillette Stadium and facing the NFL’s best defense. My only question is can he deliver after Bill Belichick removes Derrick Henry from the equation? PATRIOTS If I were Charles Barkley; Titans +5

(6) Vikings at (3) Saints
New Orleans is the best NFC team entering the playoffs. I would have zero doubts about them eliminating Green Bay next week if the game were played anywhere but Lambeau Field. A few weeks ago I would have pegged Minnesota as the team I’d least like to play in the opening round of the playoffs. Things have fallen apart since then. Dalvin Cook has been banged up. They’ll be down two corners this week (three if you count the ghost that is Xavier Rhodes). Adam Thielen hasn’t been the same since the hamstring injury and even Kirk Cousins is backsliding. A part of me wonders if the Vikings accepted their fate as a Wildcard team weeks ago and has been bunkering down since, waiting to pounce on their first round opponent. They’re good enough when at their best to contend with New Orleans. At this point, though, Brees and the Saints offense are too hot to pick against at home. SAINTS If I were Charles Barkley; Vikings +8

(5) Seahawks at (4) Eagles
All this talk of the NFC East Champ being undeserving of a playoff spot is nonsense. The AFC South and NFC West sent 9-7 teams into the postseason for years and the only time anyone flinched was when Seattle won the West at 7-9. Besides, the Eagles finished with an identical record as the Rams, the team that would’ve claimed the 6th spot if divisions were ignored. So spare me the, “Eagles got in because their division sucked” garbage.

With that said, it’s been 42 days since the Eagles played a team with a winning record. There’s been a presidential impeachment, targeted military strikes with significant results, and a New England Patriots collapse since then. Did I mention the team the Eagles played 42 days ago was the Seahawks? Yes, a lot has changed in six weeks, but a lot has stayed the same. The Eagles offense is still decimated by injuries, still doesn’t throw downfield, and is still without its ground and pound lead back. Sure, Miles Sanders has been great since Jordan Howard’s injury, but in a playoff game without your All Pro Guard, Tackle, and likely Tight End, with practice squadders at receiver… rolling out a healthy two-headed monster like Howard and Sanders would be lethal.

Seattle’s backfield is an injury mess too, but I think that works against the Eagles. An injured backfield means Seattle will rely more heavily on the pass. I’ve considered it a gift whenever teams ran the ball against the Eagles. Coaches are proud individuals. They believe their teams are good enough at what they do to do it against anyone. Injuries change that mentality, though. Pete Carroll probably won’t be as stubborn in establishing a run game with his 4th string back and an unretired Skittles junky. Once he abandons the run game he’ll find ample opportunities for big plays on the outside with Tyler Lockett and DK Metcalf. Whichever guy lines up across Rasul Douglas will have big play potential all night. Philadelphia’s pass rush has been hit or miss all season. If it’s a miss Sunday, they’ll be in for a world of hurt.

The Eagles have three distinct advantages here. 1. Doug Pederson is a better in-game coach than Carroll. Carroll does inexplicable things on a weekly basis. Pederson isn’t afraid and will undoubtedly be aggressive knowing his team is short stacked. 2. This Eagles team performs better as underdogs. It’s weird and it’s frustrating, but it’s proven. When their backs are against the wall their best comes out. For two straight years this team has slept walk through the season and then woken up right before they flat lined. While I would love it if the Eagles knew how to be great just for the sake of being great, the truth is they only know how to be great when everyone tells them they can’t be. 3. The Linc.

Now here’s where that division title matters. It’s hard to win at the Linc in December and January. It’s winter. Playoff football is the only thing the city has going for it at that time of year. The Holidays are over. Happiness has dissipated. The Sixers are underachieving per usual, and the parking is even harder if snow is around. Angst is everywhere. So for a four hour stretch on Sunday afternoon, 70,000 people will unleash that misery on 52 souls because they have the wrong colored jersey. It’s a sight to behold. It’s glorious. It’s the Eagles best chance of winning Sunday. Great crowd begets great defense. Carson Wentz does enough. EAGLES If I were Charles Barkley; Eagles +2.5