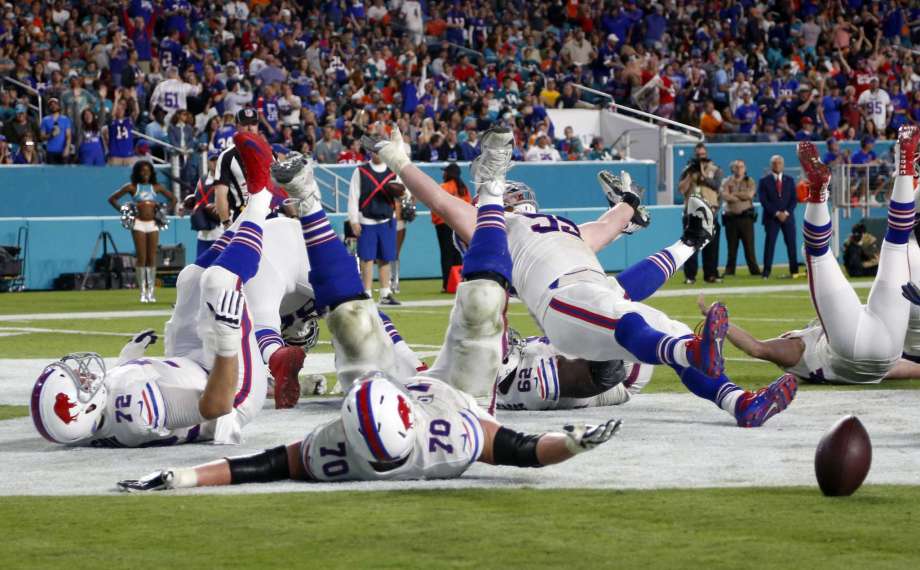 The Bills backed into the playoffs and are now poised for a deep playoff run. Just kidding. The Wildcard team that will pull the big upset this weekend is… (Photo: Wilfredo Lee, AP)

I’m back! What a disaster I’ve been this season. My apologies. The next two weekends are my favorite weekends of the year, so I had to be sure to get my picks in so you know who not to pick. You’re welcome.

(5) Titans at (4) Chiefs
I thought the Titans would be the worst playoff team we’ve had since the 2010 Seahawks upset Drew Brees and the Saints. Then the Bills backed into the playoffs and now the Titans are only the 2nd worst playoff team of the past decade. Over their last eight games, Tennessee went 4-4 with wins over the 7-9 Bengals, the 4-12 Colts, the 4-12 Texans, and a Jacksonville team already in playoff rest mode. Their losses over that stretch were to Pittsburgh, Los Angeles (Rams) and two teams with nothing to play for; Arizona and San Francisco. Playing on the road won’t help. The Titans road wins this season; the Jaguars, the Browns (in OT) and the Colts. There’s been a lot of talk this week about the Titans being the sneaky team to pull the upset in this round of the playoffs. I don’t see it unless the Chiefs implode (which is totally possible). I can’t decide if the Chiefs will choke this weekend or storm their way to the Super Bowl. Both scenarios are in play. They already beat an injury depleted and now controversy-swarmed Patriots team way back in Week 1. Then followed it up with convincing wins over the Eagles and Chargers. On the other hand, they also collapsed against teams like the Jets, Giants and Bills. Reid needs this win to fend off the torches this offseason. Alex Smith needs this win to have any hope of being the starter in KC next year. The line is too high but I’m rolling with the Chiefs. There is just too much talent on that offense and the Titans aren’t explosive enough to expose a bad Kansas City defense. CHIEFS If I were Charles Barkley; Chiefs -9

(6) Falcons at (3) Rams
The Falcon offense has looked terrible for most of the year, which is incredible considering the talent. It’s easy to say now, but if I owned the Falcons I don’t think I would have let Kyle Shanahan get away. Everyone knew he was a genius offensive coordinator that would be a head coach one day. If he were Atlanta’s coach this year and not Dan Quinn, how much better are the Falcons? One more win and they’re the 3rd seed. Obviously, you can’t fire your coach after he got you 98% of the way to a Super Bowl title, but we’ve seen talented assistants get “head coach in waiting” contracts before. It’s possible none of this matters if Quinn replaces Steve Sarkisian in the offseason, which he should definitely do. That offense is too good to lose nearly 12 points per game from one year to the next. Anyway, here’s the secret sauce to this matchup; Atlanta’s run game against the Rams poor run defense. Though Aaron Donald is amazing, that defensive line is undersized and struggles against the run. They rank 28th in the NFL in run defense, which is incredible considering six of their wins were by 16 or more points. The opponents weren’t doing much running in a blowout, so it’s possible the Rams would be even worse against the run if their offense weren’t so potent. That’s how Atlanta gets it done Saturday night. They pound the ground game and limit young Jared Goff’s opportunities. Goff has been solid all year, but I haven’t looked at him and thought, “he’s totally comfortable back there at all times.” Carson Wentz (miss you!) got to that point this season. He always looked in control, as if he’d seen it all before. Go watch the 4th quarter of the Rams loss to Philly in Week 14. Goff was a disaster. On two separate drives he had the opportunity to either close out the game or win it back. He went 1/3 for 9 yards, scrambled once for 3 yards and sacked/fumbled inside his own 30. The Rams only 1st down over those two drives was due to a defensive penalty. Also, in all the talk about Atlanta’s offense being a mess, their defense has been quietly excellent. They’re top 10 against the run and 12th against the pass while surrendering less than 20 points per game. Their defense is why they’re in the playoffs. What wins in the postseason more than anything else? Run game and defense. Atlanta can do both. If they establish their running game, somehow find a way to limit Todd Gurley and force Goff to beat them with limited opportunities; you can see the map for an upset. I know the Rams are the NFC darlings, but are we sure we’re not overvaluing them? Gurley is great and deserving of MVP discussion, but who else scares you on that offense? Look at their schedule. Find their best win. It’s Week 12 against the Saints. They probably played the two worst divisions in football in the AFC South and NFC East. The Rams are a force to be reckoned with, but this feels like one of those times when the young team falls flat against a playoff tested, veteran squad that almost didn’t get in (see Ravens, 2014). Oh good gracious, I can’t believe I talked myself into the Falcons. I’m going to regret this. FALCONS If I were Charles Barkley; Falcons +

(6) Bills at (3) Jaguars
Let’s a play a game where we determine just how bad the AFC Wildcard teams are this year. The Titans and Bills enter the postseason with negative point differentials (-22 and -57, respectively). In the AFC alone, there were two teams left out of the postseason with point differentials at least 100 POINTS BETTER (Ravens +92 and Chargers +83). In the NFC, you have to pass over three non-playoff teams before you get to a team with a negative point differential. I love Buffalo and don’t want to hate on the Bills, but they’re just not any good. Nor are they any fun to watch. They’re one of the four worst offenses in the NFL and they averaged 14 points per game over the 2nd half of the season. The defense ranks among the bottom seven as well, so there really isn’t much to get excited about here, and if LeSean McCoy is out, well, then we’re all in for a sour treat. With all that said, the Jaguars are certainly beatable because of Blake Bortles’ capacity to implode, but you still have to find a way to score points against a vicious defense. That won’t be easy without any offensive threats outside of a hobbled McCoy. Writing this has been therapeutic. I’ve learned I’m just angry at the Ravens for blowing that 9 point lead to the Steelers in six minutes. I guess Andy Dalton’s charity wouldn’t be booming then, so I guess maybe I should change my outlook. Whatever. The AFC sucks. JAGUARS If I were Charles Barkley; Jaguars -9

(5) Panthers at (4) Saints
This one is a doozy. I typically head into the postseason having a pretty good idea of who I think will be in the conference championship games. I’m not saying I’m right, but I’m confident of who I think will be there. I have no clue this season, especially in the NFC. If the seeds hold Saturday (which I obviously don’t think will happen), the winner here will end up in the NFC title game. The Eagles are sitting ducks and everyone knows it. Win this one and it’s likely only Nick Foles stands between you and a shot at the Super Bowl. In fact, I don’t think it’s that crazy to imagine an NFC South matchup in the NFC title game. It’s clearly the best division football and once Carson Wentz went down there was no longer a heavyweight in the NFC. Anyway, I really want to take the Panthers because their defense is vastly underrated. On the other hand, Carolina’s offense is just too banged up. Devin Funchess is playing hurt. Greg Olsen is still coming back from a nagging foot injury and the Panthers are down to their 4th and 5th receivers outside of Funchess. Then there’s always the question of which Cam Newton shows up. The mercurial quarterback is the single biggest factor in Carolina’s potential week in and week out. I love Cam more than most, but it’s kind of amazing he hasn’t figured out how much his attitude impacts the team. Happy, freewheeling, confident Cam is nearly unstoppable. Sad face, back-foot throwing, 2nd-guessing Cam is a recipe for defeat. If someone could promise me the former over the latter, I’d take Newton every day of the week. But you can’t, so I won’t, even though I really, really want to. Also, the whole “it’s tough beating a team three times in one season” thing is garbage. Maybe I’m suffering from PTSD here but they said the same thing about the Eagles and Cowboys in 2009 and the Eagles got smoked in the third matchup after losing the first two. So keep that nonsense to yourself. SAINTS If I were Charles Barkley; Panthers +7