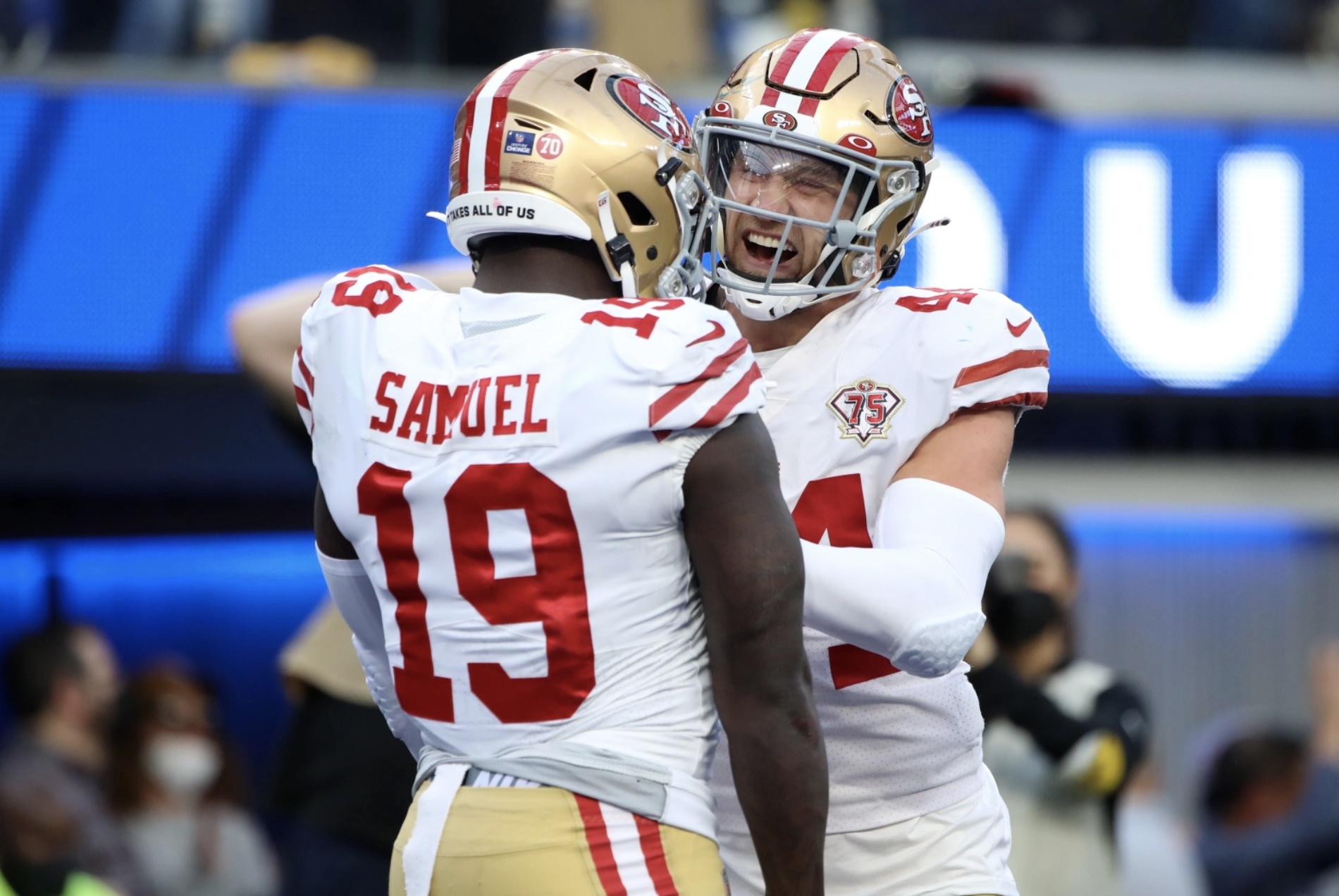 I really liked Deebo Samuel and the 49ers when I picked this photo. Two days later and I feel awful about the uber-popular underdog Niners (Photo by Katelyn Mulcahy/Getty Images)

The playoff field is as wide open as I can remember. I have absolutely no idea what will happen this weekend. You are so welcome for this content. Here we go…

(5) Raiders at (4) Bengals [4:30PM ET, NBC]
Last Sunday, in a do-or-die scenario, a football team converted six consecutive 4th downs to keep their season alive. Las Vegas is the team that surrendered those six conversions and they’re in the playoffs. Lol. Anyway, I like this matchup a lot. I think the game boils down to who wins the pass protection/pass rush battle when the Bengals have the ball. The Raiders can’t keep pace with Joe Burrow’s offense. They just can’t. Las Vegas must generate consistent pressure on Cincinnati’s suspect offensive line to limit Burrow and his plethora of weapons. If they can do that, Derek Carr and the Raider offense will have a shot. After what amounts to four straight playoff wins I’m not overly enthusiastic about writing off the Raiders, especially against a team that has laid some large eggs this season. RAIDERS +5.5

(6) Patriots at (3) Bills [8:15PM ET, CBS]
I had no idea Viagra was a method to keep warm in frigid temperatures. As an avid skier, I often find myself outside with wind chills well below zero. Needless to say, I will be locked in Saturday night to see if this back alley prescription is actually effective. As for the game, I have little hope for the Patriots. Mac Jones has looked overwhelmed for a solid month outside of the Jacksonville game. Josh Allen it is, I guess. BILLS -4

(7) Eagles at (2) Buccaneers [1:00PM ET, FOX]
Obviously, I’m a big Eagles fan, but I don’t get the optimism with this team. Not only have they failed to beat a good team all season, they really never hung with one either. San Francisco in Week 2? Dominated the entire 2nd half until garbage time. Dallas and Kansas City? Blowouts. Same with Tampa and Las Vegas, only garbage time efforts made the scores look more respectable. The Eagles most admirable loss was to the Chargers way back in Week 9. Yes, it’s been two whole months since the Eagles played a team worthy of the postseason (not including Dallas Week 18 because the Eagles forfeited that one).

So tell me… how is a team whose best wins are Denver and New Orleans going to beat the reigning champs? The Eagles weren’t 3-6 because of a new coach or a flawed system (though those were certainly contributors). They were 3-6 because they’re not a very good football team. The defense is suspect at best. Don’t believe me? Chew on this and get back to me… Philadelphia went 2-7 against quarterbacks who will start for an NFL team in 2022. Those wins were against Matt Ryan and rookie Zach Wilson.

Sure, the NFL’s top ground game counts for something. That alone should give the Eagles a puncher’s chance. However, that chance would require the defense to stifle Tom Brady. I know Tampa is injured, especially at wide receiver, but let’s not pretend Tom Brady won all those Super Bowls with a stellar group of receivers. He doesn’t need Jerry Rice out there to win in January.

Finally, I just don’t believe in Jalen Hurts. He’s a great football player and a subpar quarterback. Outside of Dallas Goedert, the Eagles two best receivers are deep threats running routes for a quarterback that simply can’t throw deep. Perhaps if the Eagles defense were actually good, the run game and Hurts could hang around long enough to steal a win. I expect a double digit deficit in the 4th quarter, forcing the Eagles to attack mostly through the air. At that point Hurts and the Eagles are toast. BUCCANEERS -8.5

(6) 49ers at (3) Cowboys [4:30PM ET, CBS]
The 49ers became America’s darling in less than a week. When I was growing up almost everyone was a Dallas fan. Now it seems everyone roots against Dallas. Obviously, I root against Dallas too, but that underdog bandwagon is way over capacity. Sportsbooks are reporting over 60% of action on this game toward the 49ers. Does a overwhelmingly popular underdog ever come through in these scenarios?

If the 49ers advance it’ll be because Kyle Shanahan outcoached Mike McCarthy (very likely) and Jimmy Garoppolo picked apart an overrated pass defense (possible). Let’s not forget Garoppolo was in the Super Bowl two years ago. The stage won’t be too big for him. Dak Prescott, on the other hand, has been a roller coaster this season. Dallas wisely played Prescott and the offense last week in Philadelphia to get right and it worked… at least for one night. San Francisco’s secondary is the soft spot of the 49er defense so Prescott should have his way if the line can protect him. I can’t believe I’m backing McCarthy here but I hate crowds and that 49er bandwagon smells like the Titanic. COWBOYS -3

(7) Steelers at (2) Chiefs [8:15PM ET, NBC]
I can’t see the Steelers winning without a significant injury to Patrick Mahomes, and even then that would only level the QB playing field not necessarily tilt it heavily in Pittsburgh’s favor. I like Ben Roethlisberger, but whatever the Steeler offense is doing makes my eyes bleed. Over the last two weeks Roethlisberger threw 90 passes and racked up 357 yards. Woooooffff. In Pittsburgh’s defense, the ground game isn’t really a better option. The Steelers rank 29th in yards per attempt. If Big Ben doesn’t want to be retired on Monday, he’ll need to dig deep and find some big chunks in the passing game and hope TJ Watt and the defense contribute to the scoring. Chiefs win. PITTSBURGH +13

(5) Cardinals at (4) Rams [8:15PM ET, ESPN]
(I know I’m in the minority here, but I really like the Monday night game. It felt too crowded with the three Saturday games last year. This spreads the football out a bit and gives the NFL another prime time stage.) Kyler Murray and the Cardinal offense have been a mess for months. Their red zone offense is really struggling without DeAndre Hopkins. Not sure if Murray is still injured or if this is just another example of a Kliff Kingsbury team fading down the stretch. Whatever it is, it’s been ugly. I don’t really trust Sean McVay much, either. However, there’s too much talent on that Rams team to lose to this version of the Cardinals. If Murray can channel a Superman effort then maybe the Cardinals will advance. Unfortunately, Murray hasn’t been that spry since October. If I’m a Rams fan I’m fervently praying for Matthew Stafford to just be cool Monday night. RAMS -4