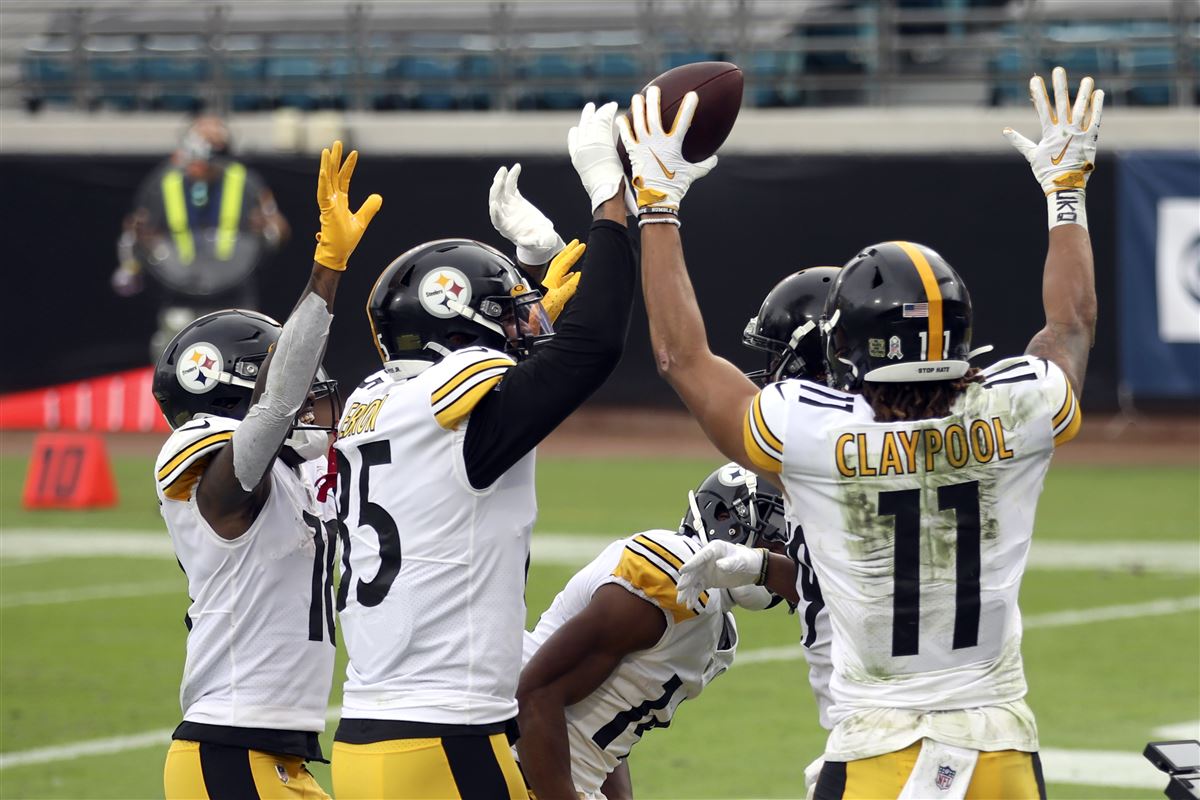 If Ben Roethlisberger isn’t in a rush, the Steelers will ride their talented trio of receivers into the Divisional Round. (Photo by Associated Press)

Nothing interesting happened this week, so I’m super glad we have a weekend full of football to produce content and talking points. Here we go…

(7) Colts at (2) Bills [1:05PM ET, CBS]
The Colts are not to be written off like a typical Wildcard team, sneaking in on the final day of the season after some help from around the league. They’re a well-rounded, well-coached team. Thus, I’m not as convinced the Bills are a lock here as most. Yes, Buffalo is the hottest team in the NFL. They haven’t lost since before Thanksgiving. In fact, if not for a DeAndre Hopkins Hail Marry, the Bills would be winners of ten straight. But the Colts are legit. Unfortunately, I can’t commit to picking the Colts because I don’t think the Bills offense is containable right now. The Colts offense just won’t be able to keep up. However, if the Indianapolis defense can force some turnovers or slow down Josh Allen and Stefon Diggs, that would allow the Indianapolis offense to control the clock and frustrate that Bills offense. That’s the Colts map for success. I just don’t think it’ll happen. Allen fell flat a year ago in Houston. Playoff failure often begets playoff success. BILLS If I were Charles Barkley; Bills -6.5

(6) Rams at (3) Seahawks [4:40PM ET, FOX]
I don’t think the Rams have much of a chance unless Jared Goff plays and plays well. Just kidding. Jared Goff doesn’t play well. The Rams have to rely on their defense and run the football a TON. I don’t think anyone is sold on the Seahawks as an NFC contender. Russell Wilson and the offense have been wildly inconsistent after a hot start, and Seattle’s defense isn’t putting fear into opposing offenses like the glory days. I think with a healthy Goff, the Rams would upset the Seahawks. Unfortunately, we don’t know what condition Goff’s thumb is in or if he’ll even play. SEAHAWKS If I were Charles Barkley; Seahawks -3.5

(5) Buccaneers at (4) Football Team [8:15PM ET, NBC]
Three weeks ago I would’ve picked Washington here, but two things have happened since then. First, the Washington offense has flat lined. They just don’t threaten a defense in any way. The passing game is a dink and dunk disaster. The running game hasn’t had a solid outing since running over the Cowboys on Thanksgiving. Last week against an Eagles defense of backups, Washington’s offense did little. They accomplished even less a week prior against a bad Panther defense whose season ended weeks prior. Such an inept offense puts too much pressure on a very good defense to be perfect. Which leads me to my second point… the Buccaneer offense has finally found its groove. Sure, Tampa Bay’s opponents over the past three weeks have been dreadful defensively for most of the season and have had little incentive in December, but Brady has been stellar. He’s averaged 379 yards per game, thrown 10 touchdowns to just 1 interception. The offense has averaged 40+ points as well. Do I think they’ll roll over a Washington defense like they did Atlanta and Detroit? No. Brady has shown a relentless pass rush will frustrate and neuter him. But the Buccaneer defense is also really good. Ultimately, I think they’ll be the unit to win this game by forcing Alex Smith into turnovers. Tampa was the NFL’s top rush defense, so there will be little help coming from Antonio Gibson and the rest of Washington’s running back committee. If they do find success on the ground, Smith and the Football Team have a chance. I just don’t see it happening. BUCCANEERS If I were Charles Barkley; Buccaneers -8.5

(5) Ravens at (4) Titans [1:05PM ET, ABC/ESPN]
I think Baltimore’s playoff struggles end Sunday. As I’ve said countless times over the last month, the Ravens doubled down on what they do best and are going to let it ride, hoping it will be enough to advance in January. While I still don’t think it’ll be enough against elite offenses like Buffalo or Kansas City, I don’t think the Ravens could have drawn a better first round matchup. Tennessee’s defense is dreadful. They surrendered 30 or more points in half their games this season. While I like the Titan offense, I think a Baltimore defense that underperformed for most of the season will show up big against Derrick Henry. I hate that I feel so confident here, but the Titans are one of those teams that have been hanging on for dear life this year. They’re the 2019 Patriots, but instead of surviving a lousy offense, they’ve survived a bad defense. And we all know how that 2019 Patriots team went down in flames. RAVENS If I were Charles Barkley; Ravens -3

(7) Bears at (2) Saints [4:40PM ET, CBS]
Chicago won three of their last ten and still crawled their way into the postseason because, like most of the world in 2020, the NFC was a clown show. It’s hard to find a shred of supporting evidence for the Bears upsetting the Saints aside from the Saints falling flat on their face at some point in the playoffs for the 4th year in a row. I know, I know; the Saints needed overtime to beat the Bears in Week 8. But that was week 8. Regardless, let’s try to find Chicago’s best hope at victory. Defensively would be the easy answer except the Bears defense wasn’t anything special in 2020. They were middle of the pack across the board and 25th in forced turnovers. Essentially, the Bears defense isn’t dominant enough to stop the Saints, they don’t pressure the quarterback exceptionally well, and worst of all, they don’t force game-changing turnovers. Offensively? Yeesh, the Bears have been an offensive mess for most of the season. Their best stretch of the season came recently, in Weeks 14 through 16. Unfortunately, two of those weeks were against the Texans and Jaguars, who finished as the worst and 3rd worst team in the NFL. The other was the dreadful Minnesota defense. However, when the Saints did lose in 2020, it was because they surrendered 30+ points. (Their Week 14 loss to the Eagles was the only exception and that was just 2020 flexing on the Saints.) Anyway, the Chiefs and Raiders both dominated time of possession and the Packers only punted once. So how does the Bears dreadful offense dominate one of the NFL’s best defenses? Well, first, they don’t. Second, they have to unleash Mitch Trubisky and live with whatever happens. He’ll likely be dreadful and turn the ball over four times, but the slim hope he has one of his random 300+ passing and 50+ rushing days is somehow Chicago’s best… and probably only… hope. Good luck, Chicago. SAINTS If I were Charles Barkley; Saints -10

(3) Steelers at (6) Browns [8:15PM ET, NBC]
The poor Browns finally make it back to the postseason and won’t have their head coach. Similar to the Rams, Cleveland must run the football 40-45 times with effectiveness to win this game. Unfortunately for Cleveland, they don’t have the luxury of a great defense like the Rams. That’s where the wheels fall off. Pittsburgh’s Week 16 2nd half against the Colts was big for the Steelers. They re-discovered their mojo. No, they still can’t run the football, but they can throw it as well as any team in the league if Ben Roethlisberger is willing to hang in the pocket for that extra second. If he’s not, the Pittsburgh offense will revert to the constipated unit on display during their three week December skid. The good news for Roethlisberger and Pittsburgh is Cleveland’s pass defense is a problem… for the Browns. Though Miles Garrett is a force, the Browns defense as a whole doesn’t pressure the quarterback well. They’re in the bottom ten in pressure percentage and rank only a bit higher in sacks. Even worse, the Browns miss a good amount of tackles. Pittsburgh loves getting the ball to their receivers in space. I like Cleveland. Running the football is perhaps the greatest weapon in the postseason, but if you can’t pair it with a dominant defense or an elite play action passing game (sorry Baker Mayfield), I just don’t see how you unseat the league’s best defense. Also, I don’t know if I’ve ever picked all favorites. This won’t end well. Oh well. Money doesn’t buy happiness. STEELERS If I were Charles Barkley; Steelers -6