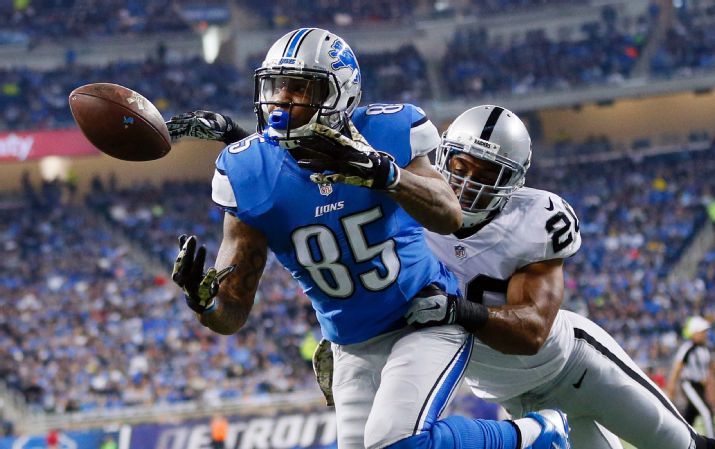 Eagles at Lions
Perhaps the most puzzling part about the Detroit Lions in recent years is their volatility. In 2011, the Lions finished 10-6 and earned a Wildcard berth. It was thought to be the first of many playoff appearances to come. Matthew Stafford wasn’t even 24 and finished the 2011 season with stats rivaling names like Brees, Brady and Rodgers. Calvin Johnson had just turned 26 and was unstoppable on the outside. As an offense, the young Lions were flourishing. They finished the season as one of the top 5 offenses in the NFL. The Lions were on the rise… Or not. Detroit finished 4-12 in 2012 and 7-9 in 2013 despite remaining a top 6 offense in the league. In 2014, under a new coach, the Lions went 11-5 and returned to the postseason behind a less potent offense but one of the league’s top defenses. Again, the success was fleeting. At 3-7 this year, missing the playoffs is all but guaranteed. Jim Caldwell will probably lose his job. Calvin Johnson is showing his age while Matthew Stafford is steadily regressing. What looked like the beginning of a perennial contender back in 2011 ultimately became another disappointing Lions team. I feel bad for Lions fans. I almost feel thankful to be an Eagles fan, but then I remember Chip Kelly is in charge. EAGLES If I were Charles Barkley; Eagles +2.5

Panthers at Cowboys
I think Tony Romo is a really good quarterback. He’s been underrated for most of the last half decade. With that said, I think people are getting a little carried away with how good the Cowboys are now that Romo is back. Let’s not forget, this team went 0-7 in Romo’s absence. Romo can only play one position. It’s not like they beat the Patriots last week, either. The Dolphins are horrible, so let’s pump the breaks on Dallas being a contender in the NFC. Also, why do people believe this game doesn’t mean much to the Panthers? The Cardinals are only two games back and look unbeatable right now. Home field advantage is huge if it means not traveling to Arizona. (Cardinals are 11-2 at home since 2014.) Also, Carolina has constantly been discounted throughout the season despite their record. They were underdogs at home to the Packers and are now underdogs to a 3-7 team. People continually doubt Carolina. Don’t think they’re not paying attention. PANTHERS If I were Charles Barkley; Panthers +1

Bears at Packers
Normally I would take Aaron Rodgers in this situation without even seeing the line. Rodgers against a lesser opponent in primetime is almost guaranteed. Unfortunately, I have no idea what to expect from Rodgers’ receivers from week-to-week. Despite a MUCH better outing from Green Bay receivers in last week’s victory over the Vikings, there were still plenty of drops. At one point, I thought Rodgers would be the first quarterback ejected for assaulting his own receiver. Both Matt Forte and Alshon Jeffery are supposed to play for the Bears. When both stars are healthy and available, Chicago’s offense carries some punch. I’m still taking the Packers but I’m not expecting the Bears to go quietly. Their season is on the line here. PACKERS If I were Charles Barkley; Bears +8.5