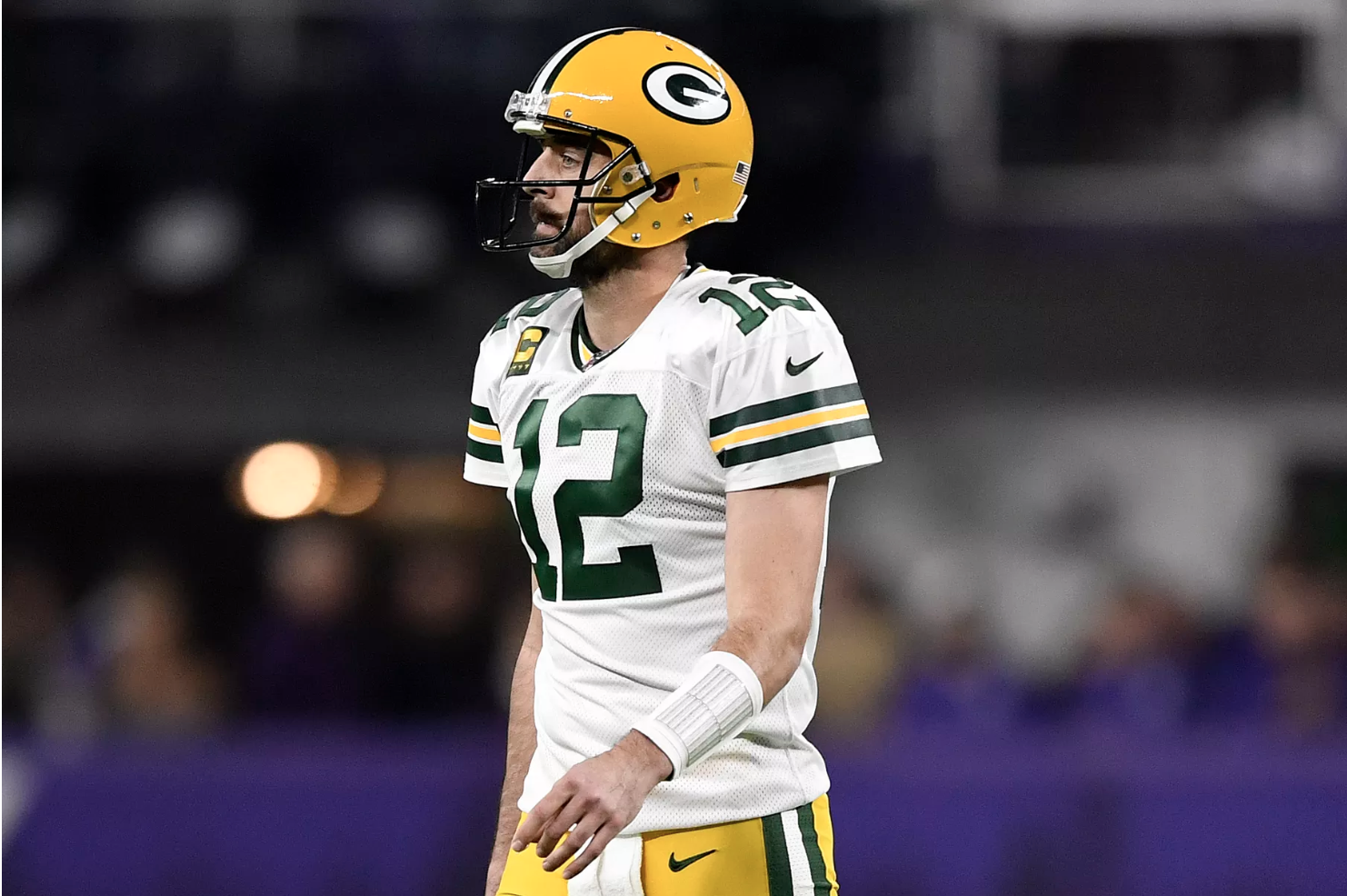 If the Packers think Aaron Rodgers is their key to victory Sunday, they will lose. (Photo by Hannah Foslien/Getty Images)

The best football weekend of the year is upon us and Ryan Tannehill and Kirk Cousins are in the thick of it. Go figure. Congrats to me for going 0-4 straight up last week. That’s some talent. As an NFL QB might say, “YOU LIKE THAT?”

“A part of me wonders if the Vikings accepted their fate as a Wildcard team weeks ago and has been bunkering down since, waiting to pounce on their first round opponent. They’re good enough when at their best to contend with New Orleans.”

Everyone gave up on Minnesota after the Packers drubbed them on Monday Night Football in Week 16. What most opted to ignore was that even with a win, Minnesota would need another victory AND a Green Bay loss in Week 17 against the hapless Lions to secure the NFC North. They were destined for the Wild Card and acted accordingly.

I can’t decide if Minnesota winning was good or bad for the 49ers. Obviously, the Eagles were the preferred opponent, and Seattle looks appealing on paper, but I’m guessing the 49ers wanted nothing to do with Russell Wilson and the Seahawks for a third time this year.

Anyway, that’s all pointless. I think this comes down to which quarterback do you trust more. The Kirk Cousins hype train is running downhill after last week’s game-winning drive. What many apparently forget is how bad Cousins was on the three drives prior. Some things to consider…
– The Vikings dropped back to pass on 5 of 15 plays in the final 17 minutes of regulation.
– On those last three drives they totaled 13 yards, so it’s not like the ground game was killing it.
– Cousins was 1/4 for 9 yards on those three drives.
– Minnesota faced 2nd and 17 on consecutive drives. They called a failed screen on the first one and ran the ball on the second.
– Minnesota subsequently faced 3rd and 17 on consecutive drives. They ran it the first time and took a sack on the next drive. At no point before the sack did Cousins show any desire to throw the football. He was taking a sack from the snap.

I provide this information to ask this question, do the Vikings even trust Cousins? With three different opportunities to put the game away, Minnesota went ultra conservative, seemingly content to let New Orleans have the ball despite only a 3 point margin.

Granted, Cousins did made two fantastic throws in overtime to win the game, but does that erase the 17 minutes prior when Mike Zimmer and the Vikings clearly had little to no faith in their QB?

I’m not necessarily saying I completely trust Jimmy Garoppolo. I do, however, trust Kyle Shanahan to get more out of his young quarterback than the Vikings get out of Cousins. Whether that’s through creative play-calling or heavily relying on the ground game, I don’t think Shanahan goes into this expecting his quarterback to throw the ball more than 22-23 times. 49ERS If I were Charles Barkley; Vikings +7

(6) Titans at (1) Ravens
Last week I brilliantly said Bill Belichick would eliminate Derrick Henry from the Titan offense and dare Ryan Tannehill to beat them. Tannehill threw for only 72 yards and an interception… and the Titans won. Belichick either schemed differently than I expected or his defense failed to neutralize Tennessee’s greatest threat as Henry chewed up over 160 yards at nearly 5.5 yards per carry. Baltimore’s defense is sneakily overrated. You can pound them on the ground. The 49ers did it. Cleveland and Nick Chubb did it. Even the Kansas City running game… without a true lead back… chewed up the Ravens defense. There’s meat on the bone there. The Titans can control the game and limit Lamar Jackson’s touches if they can run the ball anywhere close to the success they had a week ago. Even if they can, though, 14 points won’t be enough to beat Baltimore. Tannehill and the passing game will have to play a bigger role in scoring points.

On the other side of the ball, I think Mike Vrabel has to get creative. Selling out to stop the run and dare Jackson to beat you through the air is cliché and will fail. Not because Jackson is an elite passer, but because Baltimore’s running game is entirely unique. It’s like trying to stop Christian McCaffrey and Ezekiel Elliott at the same time. There are two elite runners on every play. Two elite home run hitters. Opponents have tried taking away Baltimore’s running game since October and no one has done it with even a modicum of success except Buffalo (118 yards/3.6 per carry). The Bills have an elite line-backing unit with both speed and size. The Titans do not have that luxury, or at least not at Buffalo’s level. So what do the Titans do?

Play the run straight up and eliminate Jackson’s tight ends and deep threats. In a way, make Baltimore replicate what the Titans did in New England. Sure, Tennessee and Henry chewed up yards on the ground but they had only 14 points to show for their efforts. Running the football is certainly effective but it doesn’t put points on the board in bunches. It generally requires more plays. More plays equals more opportunities for mistakes. I know, I know, it sounds ridiculous. But no one outside of Buffalo has come close to containing Baltimore’s ground attack. Let them have their 5-7 yards at a time, eliminate the big plays in the passing game, buckle down in the red zone and hope Tannehill can come through with some big plays of his own. It’s a radical strategy with little of hope of success, but the Raven offense is a juggernaut. RAVENS If I were Charles Barkley; Titans +10

(4) Texans at (2) Chiefs
Big ups to the NFL for finally switching to the Conference Championship Sunday schedule for the Divisional Round. I was lost last week when there was no football on in the evening. I’m guessing this schedule will draw more ratings and hopefully push them to do the same for Wildcard Weekend next year. Moving on…

I wasn’t too worried about the Patriots knocking out the Chiefs, and I’m not too worried about Houston either. Yes, the Houston offense will present more of challenge than New England’s struggling offense, especially if Will Fuller V is able to go. There’s a flip side to that coin, though. Houston’s defense is a problem… for Houston. The Chiefs should have their way against a unit that ranked 28th in yards against and 29th against the pass. Andy Reid tends to forget about his run game from time to time. It’s why he lost to the Titans two years ago despite a 21-3 2nd half lead (and a blown fumble call). It won’t matter much Sunday because they’ll find little resistance through the air. I’m not even that worried about Kansas City’s defense. They’ve settled in on the back end with Tyrann Mathieu playing a Brian Dawkins style of free safety. They’ve also upgraded their pass rush with the return of Frank Clark and waiver addition of Terrell Suggs.

We tend to fall in love with Wildcard winners. Houston’s 4th quarter was a great show. Deshaun Watson is a special talent. But that offense was garbage for over 40 minutes and Buffalo let them hang around. The Chiefs won’t be so kind. CHIEFS If I were Charles Barkley; Chiefs -9.5

(5) Seahawks at (2) Packers
No team won bigger on Wildcard Weekend than the Green Bay Packers. The Saints were going to be a problem for the Packers. If I did a playoff power rankings right now, I’d probably put the Texans 8th followed by the Seahawks and Packers in some order. Yes, the Packers went 2-0 against the Vikings this season, but Green Bay has been less than spectacular over the 2nd half of the season. Since their impressive road win over Kansas City in Week 8, they were beaten soundly by the lowly Chargers, barely hung on to take out the cratering Panthers, got drubbed by the 49ers, beat the Giants, squeaked past the lowly Redskins, held on against the Bears, beat the Dalvin Cook-less Vikings, and rallied to beat the 3-win Lions.

I’m concerned the Packers have been barely holding onto the rope for two months and it could slip through at any moment. Green Bay’s biggest problem, in my humble opinion, is that they’re confused as to who their best player is. The wrong answer is Aaron Rodgers. The correct answer is Aaron Jones.

Green Bay’s ticket to the NFC Championship lies with their young running back, not their hall of fame quarterback. And there in lies the problem. The Packers ignore him way too often. Jones finished 11 games this season with less than 16 rushes. He finished with over 100 yards in each of the five other games.

As good as Jones is, Seattle owns the biggest game-breaker in Russell Wilson. Wilson is good enough to go anywhere and win. He’s close to where peak Aaron Rodgers was three to five years ago. I think Seattle’s depleted backfield and Green Bay’s pass rush will make an upset unlikely, but I wouldn’t at all be shocked if Wilson hung 350 yards and a few touchdowns on the Packers en route to a win. Green Bay’s pass defense is better than Philadelphia’s, and their sack percentage is higher and they do force more turnovers, but Wilson playing poorly is more unlikely than him going ham.

What this boils down to is two pretty good teams that are not quite as good as their records suggest. I’m in trouble here because I’ve taken all three home teams. I should take Seattle because I trust Wilson more but their defense and depleted backfield makes me nervous. If the Packers don’t forget about Aaron Jones, they’ll win. Unfortunately, that’s a big “if.” Oh well. PACKERS If I were Charles Barkley; Packers -4