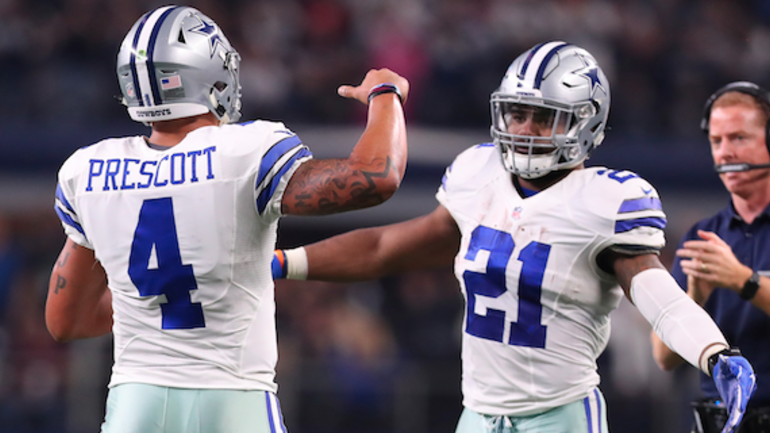 After a record-breaking season, Dallas’ phenom rookies aim to continue their success in the postseason. Advancing would require taking down the league’s top player.

(3) Seahawks at (2) Falcons
People are sleeping on the Atlanta Falcons. This isn’t the same product-of-a-bad-division Falcons. Atlanta is really good. I know people will point at their defense and talk about how it’s not any good and how it gives up more points than almost any other defense. I get it, but what defense out there that can get in Atlanta’s way? Matt Ryan roasted Seattle’s defense for over 300 yards, including 21 straight 3rd quarter points IN Seattle and WITH a healthy Earl Thomas. If officials do their job correctly, Atlanta would’ve had possession (down 2) at the Seattle 35 with over a minute to go and a timeout remaining. Furthermore, Atlanta will be playing the remainder of its games inside a dome, so they’ll avoid the weather component that often derails explosive offenses in January. People like to discredit Matt Ryan because we thought he arrived four years ago and then he went backward. He’s been incredible this season. Ryan threw 6 more touchdowns than his previous career high while also throwing two fewer interceptions than his previous career low. He finished with a higher completion percentage than Brady and Rodgers, threw for more yards despite several blowouts than anyone but Brees, his TD/INT ratio was the league’s best for quarterbacks that started more than 12 games, and he did all this while owning the highest yards per attempt ratio. In other words, Ryan’s stats aren’t fabricated by throwing 3 and 4 yard out routes. He’s chucking the ball downfield. Sure, Atlanta isn’t perfect. Get pressure and hits on Ryan and the offense will sputter. However, no team in the NFL utilizes its running backs in the passing game quite like the Falcons. If you take something away they’ll hit you somewhere else. I don’t see how Seattle can keep up. FALCONS If I were Charles Barkley; Falcons -4.5

(4) Texans at (1) Patriots
There were 13 teams in the NFL this season to commit fewer than 20 turnovers. Nine of those teams qualified for the postseason. The Patriots tied with Atlanta to lead the NFL in fewest giveaways at 11. Houston finished with more than double that amount. Conversely, the Texans only forced 17 turnovers this season, good enough for 27th in the league. I only point this out because playoff upsets tend to start with quarterback pressure and build with turnovers. Without JJ Watt, the Texans were among the NFL’s worst in QB sacks with 31, down 14 from a year ago. Few teams protect their quarterback and the football as well as the Patriots. It’s not like Houston’s offense is in any way capable of outscoring Tom Brady and the New England offense. Not that this is a surprise to anyone, but there’s no reasonable path to an upset here barring a tragedy or horrifying string of New England injuries. PATRIOTS If I were Charles Barkley; Patriots -16

(3) Steelers at (2) Chiefs
Last season I wrote about how seven of the NFL’s top defenses reached the postseason while only four of the top offenses qualified. I offered that last year might be an anomaly considering in 2013 and 2014 more top offenses made the playoffs than top defenses. That appears to be the case. This year only four top defenses survived the regular season compared to six of the top eight offenses reaching the playoffs. While ranking units on total yards can be somewhat misleading, it still goes to show you’re better off with a great offense than a great defense if the goal is to reach the postseason. (The equation changes once you take Super Bowl titles into consideration, but there’s no doubt a top offense gets you into the dance more often than a top defense.) Just look at the Broncos. Their defense overcame a bad quarterback last season to win the Super Bowl and that same formula failed them this season.

Anyway, I thought the Steelers were the biggest phonies of Wildcard Weekend. They crushed an injury depleted Dolphins team that was actually only a couple of Matt Moore brain farts from being in that game. I’m pretty confident the Chiefs will scheme to take away Le’Veon Bell and dare Ben Roethlisberger to beat them through the air. That may sound like a foolish plan but Roethlisberger isn’t as good as people like to believe. Last Sunday was his first playoff performance with a QBR above 50 since 2010, and outside of the two Antonio Brown touchdowns I thought he was pretty poor. Andy Reid finds ways to win these types of games despite a limited offense. CHIEFS If I were Charles Barkley; Chiefs -1

(4) Packers at (1) Cowboys
The crown jewel of the weekend and perhaps the playoffs. The NFL will love the ratings this game pulls and may even try to put both teams in the NFC Championship Game next week for a rematch. The Jordy Nelson injury is certainly a big loss for Green Bay and Aaron Rodgers. I’ve heard many discount the injury based upon the Packers’ output last week. There’s a difference between losing a player in a game and not having a player going into a game, especially for the opposing defense. The Giants had no time to scheme for Nelson’s absence. Dallas will. They’ve had time to find ways to expose the loss of Nelson in ways the Giants were not afforded. Is Rodgers good enough to go on the road and win without his top receiver? Uh, duh.

If I’m the Packers, I put eight guys in the box and dare Dak Prescott to beat me. Even if he gets the better of you a few times, do you think he can outgun Rodgers? Ezekiel Elliott is the death toll for Green Bay. If he’s a factor I don’t think the Packers can win. Elliott gobbling up yardage early means less clock and fewer opportunities for Rodgers and the offense. A two score 4th quarter lead for Dallas means a heavy dose of Elliott against a likely fatigued defense. Elliott can’t be a factor. The Packers must make this game fall on Prescott’s shoulders. Green Bay can win a 45-42 shootout but they can’t win a 28-24 game of possession and ball control.

I think I like the Packers in a coin flip. I just don’t trust Jason Garrett to ride Elliott like he should. Nor do I trust Dak Prescott in a playoff atmosphere with the game (and season) on his shoulders. If I believed in Dallas’ defense I’d take the Cowboys with no hesitation, but I don’t think that defense will allow Dallas’ rookies any margin for error against the NFL’s best player. PACKERS If I were Charles Barkley; Packers +4