Opposing forces meet in KC, avoiding a 2008 reversal in Philly, Joe Burrow is the answer, and arguing with myself about the right pick in San Fran.

I say this every year, but this is the last Saturday-Sunday football combo until September. Drink it in while you can.

(4)Jaguars at (1)Chiefs [4:30PM ET, NBC]
Andy Reid’s resume is full of playoff disappointment. I’m using “disappointment” as code for underachieving. We all love Reid, but his seasons in Kansas City have ended with his team falling short as the favorite more often than not. In six of the Chiefs eight playoff appearances under Reid they have exited the playoffs despite being the favorite. In postseason losses under Reid, Kansas City is 0-7 against the spread. (I know, duh. But they were underdogs once and still didn’t cover. So there.) Conversely, in postseason games the Chiefs have won under Reid, they are 7-1 against the spread. The only time they didn’t cover was against Cleveland in 2020 when Chad Henne relieved an injured Patrick Mahomes. Safe to say Kansas City is either winning and covering or going home early.

Doug Pederson, on the other hand, has been the favorite in one playoff game throughout his entire head-coaching career. Only once. Imagine that. Pederson is 6-1 against the spread in the playoffs. His only loss was also the only game his team was favored. In that game his starting quarterback was speared to the head on the team’s second possession and never returned. Furthermore, as an underdog, Pederson has won outright five times in six games.

I think the Chiefs will win but also expect Jacksonville to cover. Unfortunately, as I’ve just detailed, we have two powerful forces that tell me the Chiefs winning and the Jags covering is virtually impossible. Either Pederson wins as a dog or the Chiefs win and cover. I have no idea what I’m to do. CHIEFS -8.5

(6)49ers at (1)Eagles [8:15PM ET, FOX]
I’m not totally convinced Jalen Hurts is all the way healthy. “Feeling good” and “the extra week helped” does not say “fully healed up and ready to roll,” at least not to me. Maybe I’m thinking too negatively, or maybe the Eagles are playing coy, but I am expecting a less than 100% Hurts on Saturday night. I’ll say this for the 100th time this season… Please, Nick Sirianni, run the football.

As for the Giants, they pose a unique threat because of the way they utilize Saquon Barkley out of the backfield. He lines up all over the place. Last week it seemed he was used more often as a decoy than the primary weapon. Pair Barkley’s explosive playmaking skills with a mobile quarterback and you have a nightmare for opposing linebackers. Spy Daniel Jones and Barkley is likely running free somewhere outside the hash. Follow Barkley out of the backfield and Jones will enjoy the luxury of 5-7 yards whenever he pleases. Here are two examples of how Brian Daboll does an excellent job of getting Barkley… the team’s best weapon… open in space. (And yes, Jones missed both opportunities.) In the first shot, Barkley could run for miles. He may even score. In the 2nd, the safety is clearly aware of Barkley but he’s also 17 yards away. Running full speed to tackle Barkley in the open field is a battle Harrison Smith is likely to lose. 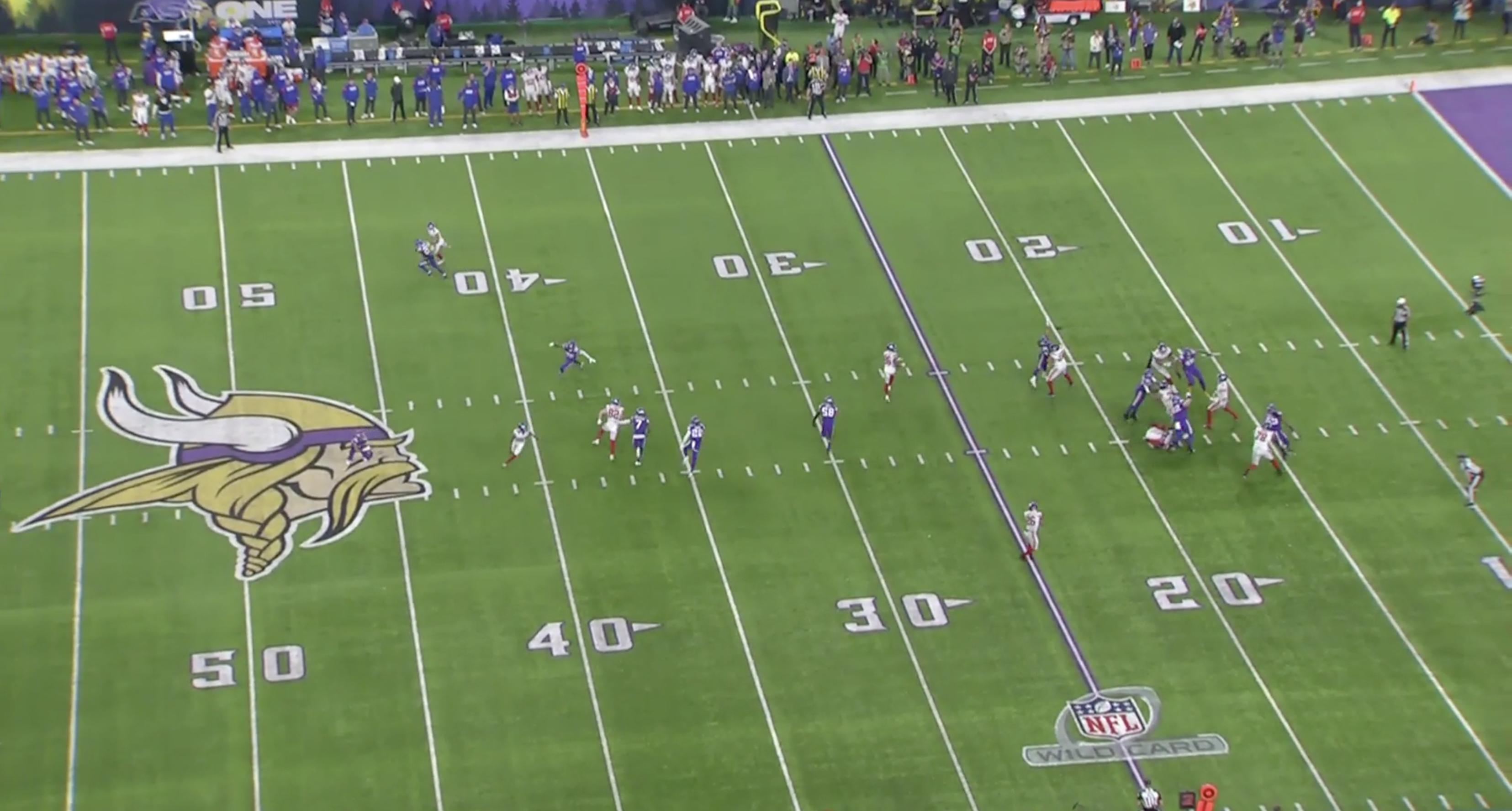 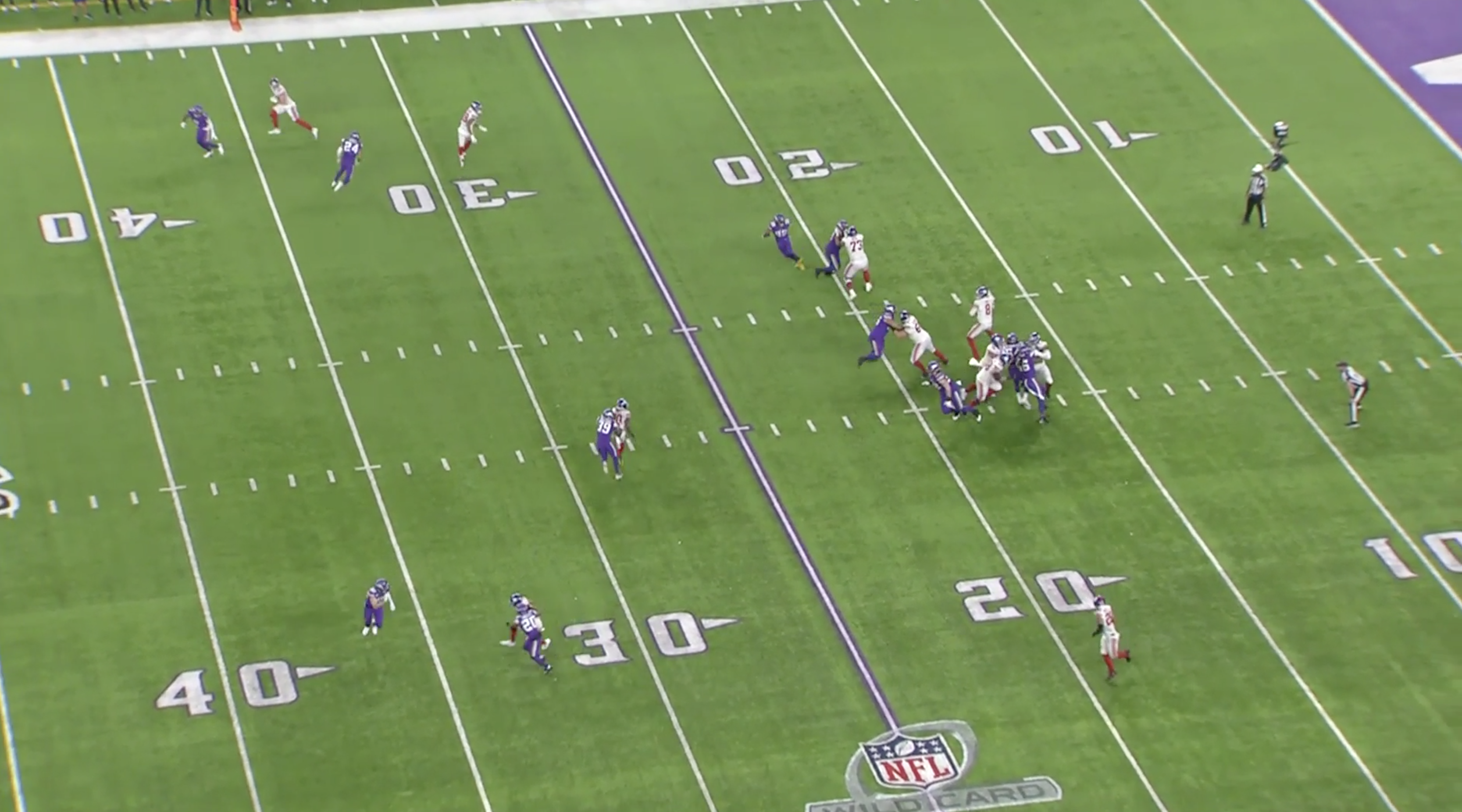 Philadelphia’s linebackers must be great for the Eagles to limit the damage done by New York’s offense, but the Eagles defensive line is the group that will really swing the outcome. They did an excellent job limiting both Barkley and Jones last month. It’ll be their job again to pressure Jones with discipline; staying gap sound, keep contain on the outside, and making tackles and not letting Jones escape. Of course, the Giants have played their best ball of the season since that loss to the Eagles, so repeating success will be much easier said than done.

On the other hand, the Eagles pressure and secondary combined to make them the league’s top pass defense. Being one-dimensional against Philadelphia’s defense is bad news and that’s quietly where the Giants find themselves.

Sometimes stats lie and the stats may be lying about the Giants rush offense. Officially, they finished the season 4th in the NFL at 148 yards per game. However, New York hasn’t had a 100-yard rusher since Week 10 against the Texans. In the eight games since (I won’t count the meaningless Week 18 game), the Giants quarterback was the team’s leading rusher five times. Even in their win last week the ground game came to a screeching halt after a blistering start. New York’s running backs ran seven times for seven yards in the 2nd half. Jones rushed four times for nine yards. Minnesota had all kinds of defensive issues and was one of the worst defenses in the NFL, and even they were able to solve the Giants rushing attack.

Do I sound confident? Probably. But really, I can’t stop thinking about 2008. The Giants were 12-4, the top seed, and the NFC’s prohibitive favorite to reach the Super Bowl and possibly repeat as champs. The scrappy Eagles won four of their last five and got help to reach the postseason on the final day of the season. Philadelphia went ON THE ROAD in the WILDCARD ROUND and handled the MINNESOTA VIKINGS before going to play the Giants in the Divisional Round. There they convincingly beat the top seeded Giants at Giants Stadium. I’m going to be sick. GIANTS +7.5

(3)Bengals at (2)Bills [3:00PM ET, CBS]
I love the Bengals here. They’ve been the better team the last two months. They were the better team on that now historic night almost three weeks ago. And I still think they’re the better team now. Josh Allen is a great, great football player, but sometimes his brain cannot keep up with his body. The red zone interception last week was yet another bad decision in a season where Allen has had too many in critical situations. There were also several times he rolled out, found an open receiver and subsequently threw the football two yards in front of the receiver’s feet. Allen would benefit from a more balanced attack, but after 17 games, I still can’t decide if Buffalo can’t run the football or won’t.

Then there’s the defense. Sean McDermott made a name for himself as a defensive coordinator in Carolina. This is McDermott’s 4th consecutive playoff appearance as Buffalo’s head coach. In 2019 the up-and-coming Bills couldn’t make a 16-0 lead against the Texans stick. The next year they surrendered 42 points to the Chiefs. Last season ended when Buffalo allowed Kansas City to score 10 points in the final 65 seconds and then couldn’t get a stop in overtime. Last week the Bills defense looked incapable against a 3rd string quarterback and a rookie head coach. Buffalo’s best defense was Miami’s drops.

I don’t solely blame McDermott for the Bills struggles, but the defense needs to be better. Injuries have certainly impacted that side of the ball this season, and it’s unfair to criticize Buffalo’s defense without that caveat, but the fact remains the defense is not very good.

Yes, Allen is good enough to give the Bills a shot against anyone, but between his propensity for a bone-headed turnover and the Bills inability to get a stop, I can’t take Buffalo against a team that just finds ways to win even when their offense isn’t clicking or their quarterback is under siege. Joe Burrow will find a way against a lackluster defense, even in a hostile environment like Buffalo. BENGALS +5.5

(5)Cowboys at (2)49ers [6:30PM ET, FOX]
Football fans always fall in love with a Wildcard team after an impressive performance, only to see them get drubbed in the Divisional Round. I don’t think Dallas is that team, even though they were by far the most impressive team of the first round.

My Dad taught me long ago that nothing disrupts a football game more than a dominant pass rush. Dallas’ pass rush led the league in pressure percentage. They had Tom Brady rattled from the jump on Monday. You may have heard the 49ers have a rookie quarterback under center. Brock Purdy looked “not great” early on against Seattle. Sure, he settled down, but Seattle’s pass rush never altered Purdy’s bubble. The Cowboys will be inside that bubble all afternoon. Maybe Purdy will continue his inexplicable play, but the odds are at some point going to catch up to the 49ers, and in all likelihood it will be a ferocious pass rush to balance the scales.

On the other side of the ball, San Francisco’s defense is very suspect on the outside. Geno Smith and DK Metcalf had their way more often than DeMeco Ryans would have liked. Dallas likely won’t have success on the ground but I’m not sure they need to in order to win. Dak Prescott played his best game of the year and perhaps his career Monday night. If he plays at that level again Dallas very well could win the Super Bowl. …..And there’s the rub…

Prescott has been unable to maintain that elite level throughout his career. We’ve seen the glimpses and the flashes, but it never sticks. The careless turnovers return and the inaccurate balls to open receivers rear their ugly head. Yes, the Cowboys pass rush is vicious and Micah Parsons is a game wrecker, perhaps the game’s best right now, but what frustrates pass rushers more than anything?

Not being able to rush the passer.

Kyle Shanahan will undoubtedly throw a plethora of bubble screens, quick slants, short crosses and misdirection at the Cowboys all night. All of these are designed to neutralize a great pass rush. It’s the 3rd and longs that the 49ers must avoid. If they can churn out modest yardage via these methods, then Dallas’ greatest asset will be all but nullified.

Ultimately, I think Shanahan is the difference here. He has the perfect weapons to impose his will against this Cowboys defense. Christian McCaffrey, George Kittle and Deebo Samuel were put on football fields to run with the football. Shanahan will get them the ball quickly and let them work. And even if the short/quick passing game doesn’t work to the extent I expect, the 49ers can still run the football as well as anyone in the NFL. You can’t rush the passer if he never has the football. There are just too many resources at Shanahan’s disposal to protect his young quarterback.

I haven’t even mentioned San Francisco’s best player yet. I think Nick Bosa makes a play or two against Dallas’ questionable tackles to swing the tide.

I almost always take the pass rush team, especially if they’re getting points, but the Shanahan – Mike McCarthy advantage cannot be ignored. (I’m sorry this turned into me arguing with myself.) 49ERS -4