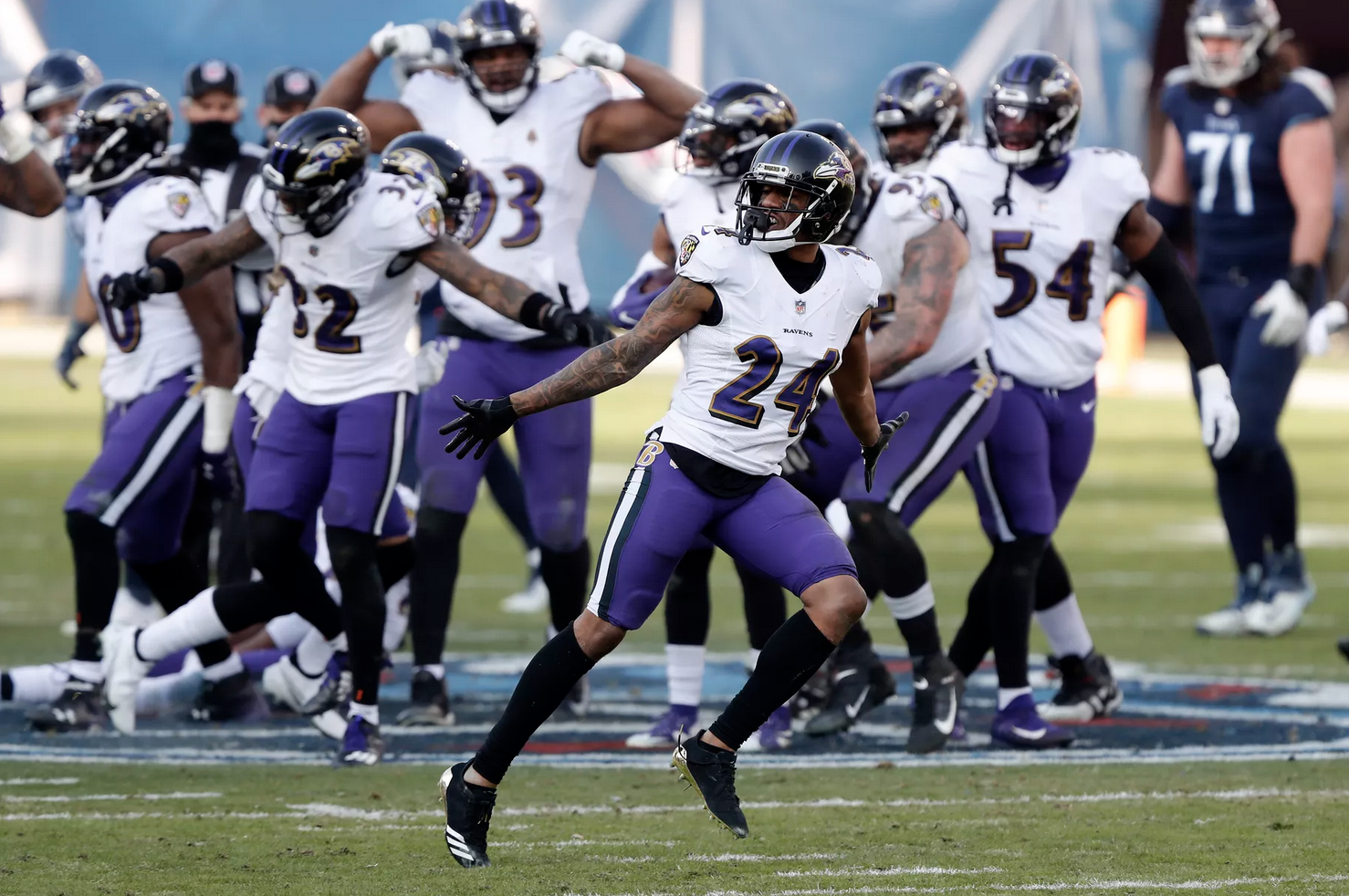 If the Raven defense can be better than horrible, they’ll have another logo to dance on. Ride that running game to the AFC Championship Game, Baltimore. (Photo by Wesley Hitt/Getty Images)

I was atrocious last week. Read on for more horrific insight and stupid opinions. No charge this week.

(6) Rams at (1) Packers [4:35PM ET, FOX]
Everyone likes to focus on the Rams defense and how Aaron Donald and Jalen Ramsey will cause problems for the Packers. Let’s not forget the Green Bay defense is also an elite unit against the pass. Between Jared Goff’s thumb and Jared Goff’s inability to be an average quarterback, the Packers can load up on the run and dare Goff to beat them. I also wonder if this is what Matt LaFleur has been saving Aaron Jones for all season. As much as I’m sure Aaron Rodgers and the Packers would like to come out and chuck the football all over the field, they’re going to have to grind away at the Rams defense on the ground. Rushing attacks slow pass rushes. Rodgers with time is a problem. I expect the Packers to go heavy with the run early, giving the Rams a steady diet of Aaron Jones and Jamaal Williams. As the game wears on and the margin grows, that’s when I think the Packers will deliver the finishing blows through the air. PACKERS If I were Charles Barkley; Packers -7

(5) Ravens at (2) Bills [8:15PM ET, NBC]
Frank Reich gifted Buffalo another playoff victory last week. Only this time, he did so from the opposing sideline. I’m a big Reich fan, but that wasn’t a great showing for him, and somehow, it was only the 3rd worst coaching performance of the weekend. The Bills have some issues they’ll need to overcome to advance. Their defense was a mess last week. The Colts offense did what they wanted for almost the entire game. Baltimore has a better running attack than Indianapolis, and Lamar Jackson is not Philip Rivers when the pocket breaks down. Why the Colts abandoned the run in the 2nd half last week is beyond me, but I’d bet my mortgage the Ravens won’t do the same. Josh Allen will need to be near perfect yet again for the Bills and I’m not sure even that will be enough. I expect the Ravens to rush for close to 250 yards and Josh Allen to start forcing things. This is my most bold (and probably foolish) prediction of the weekend. RAVENS If I were Charles Barkley; Ravens +2.5

(6) Browns at (1) Chiefs [3:05PM ET, CBS]
While I still believe Kansas City is the best team, there are plenty of reasons not to feel great about the Chiefs. First, their last seven victories were by a combined 27 points. All were single score margins no greater than 6. Only two of those wins were against playoff teams. Second, there’s no evidence of the Kansas City defense transforming into the dominant unit they became over the final weeks last year. The 2020 version of the defense simply isn’t very good. Third, the Chiefs are banged up at running back. While their lack of production at the position hasn’t hurt them thus far, Andy Reid does run the ball more in the postseason. Clyde Edwards-Helaire is not completely healthy based on reports. LeVeon Bell hasn’t shown much since his arrival midseason. Kansas City is a one-sided offense, and that’s okay because they have Patrick Mahomes, but I’m sure Reid would like to have a viable running option like he had in Damien Williams a year ago. Finally, the Browns have the perfect offense to limit Mahomes’ opportunities and keep him off the field. Unfortunately for Baker Mayfield, Nick Chubb and the Browns, Cleveland’s defense is a mess in the secondary. So while I think the Browns can effectively chew clock and score points, I don’t think their defense will have much luck slowing the Chiefs offense. I wouldn’t be shocked if the Browns pulled off the upset, but I can’t trust their defense against the best player in the NFL. CHIEFS If I were Charles Barkley; Browns +10

(5) Buccaneers at (2) Saints [6:40PM ET, FOX]
The it’s hard beating a team three times in one season is in overdrive here. More importantly, these teams haven’t met in two months. Tampa Bay is much better than they were in early November, and Drew Bress is more injured, I think New Orleans has some fatal flaws that the Buccaneers can exploit. Brees is a shell of himself. Whether due to the rib injury or age, I can’t imagine the Saints passing offense lighting up the scoreboard. What’s worse, the Buccaneers finished the season as the best run defense, so the ground game will offer little refuge for an offense desperate for big plays. Brees and Tom Brady are legends, and with that status comes advanced age. Thus, I think the winner of this one will boil down to which defense can generate more pressure over 60 minutes of game time. Neither Brees nor Brady can do much to escape pressure. Both their arms are weaker than they were in their respective primes, so when they try to force throws while under pressure it often leads to turnovers. While the Buccaneers have a better and deeper set of receiving options, New Orleans has a top five pass defense that the Buccaneers and Brady have yet to solve this season. In fact, Brady was pretty awful against the Saints in 2020. And yet, I feel better taking Tampa Bay than I do New Orleans. I just don’t trust the Saints to be able to establish the run and I haven’t seen anything from Brees this year that leads me to believe he can carry an offense to victory against an elite pass rush. BUCCANEERS If I were Charles Barkley; Buccaneers +3