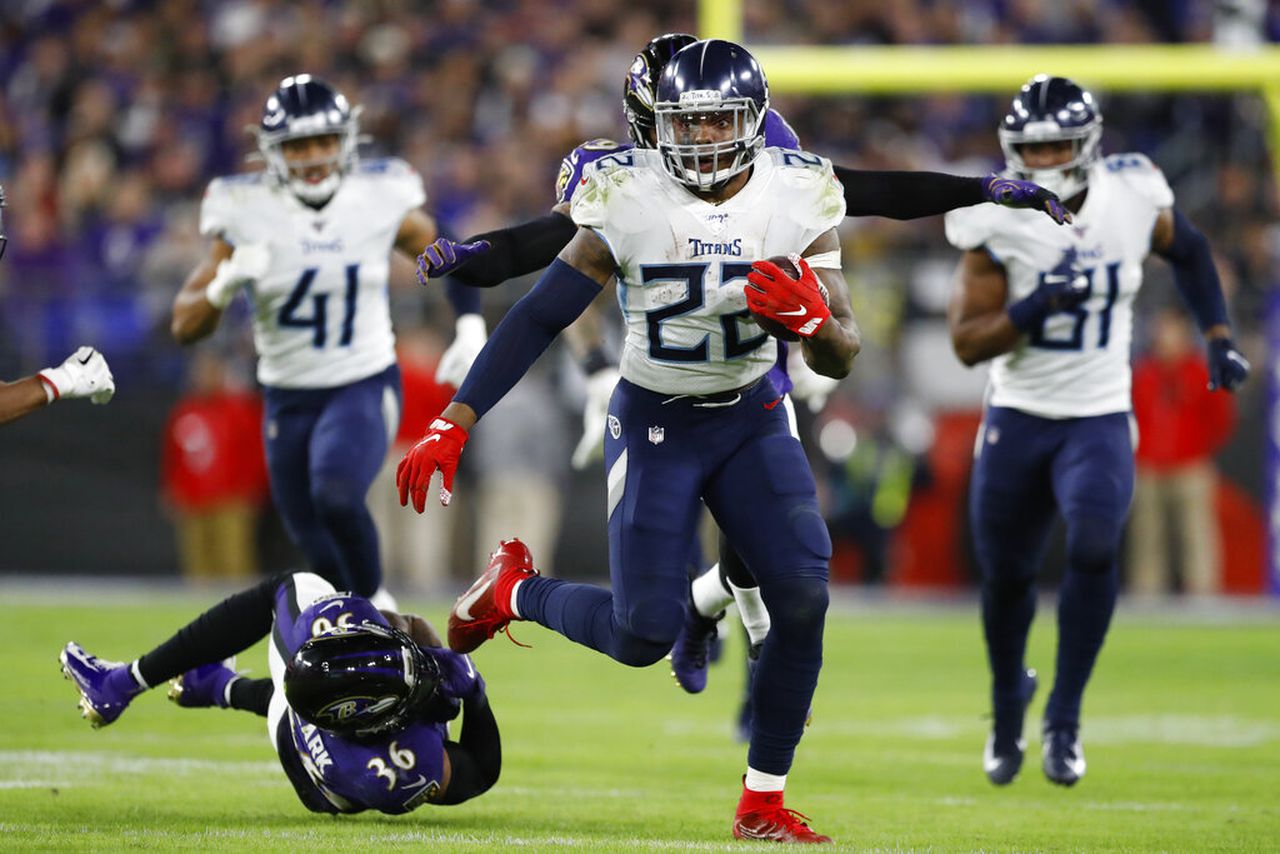 Derrick Henry has been the MVP of the postseason, but can he stop Patrick  Mahomes and the Chiefs offense? (Photo by AP Photo/Julio Cortez)

The Conference Championships are my best round. I was 13-3 in picking winners and 12-4 against the spread… until I went 0-2 last year. In my defense, if the NFL doesn’t blow an obvious pass interference call and Dee Ford doesn’t line up offside, I go 2-0 and anything in the world under $100 is mine to be had. But no. Onto the picks…

(6) Titans at (2) Chiefs
Before we start, allow me a rant on the Ravens… I thought the Ravens choked big time last week. Lamar Jackson was the obvious dud but John Harbaugh and Greg Roman deserve even more blame. They failed their young quarterback by abandoning what they did well all season long in just a matter of minutes.

Baltimore was a running team, a record setting run team. Throwing the football 59 times when you only trailed by two scores for 68% of the game is crazy. Take a look at Mike Vrabel the week prior against New England. The Patriots were leading and threatening to score again. Vrabel’s defense held and forced a field goal but it appeared Tennessee was on the ropes at that point. Vrabel didn’t panic. On their ensuing drive the Titans ran the football five of their next seven plays, and one of the two pass plays was a screen to Derrick Henry. The Titans scored.

Last week, after Baltimore fell behind 14-0 in the first quarter, they threw the ball three times and went three and out. Gus Edwards wouldn’t get a touch the rest of the game. Mark Ingram would only run the football three times over the next 46 minutes. People can blame Jackson all they want, but it’s a coach’s job to protect players from themselves in that situation. Jackson was clearly rattled. He kept the ball on nearly every option. He threw nothing but flutter balls all night. He was a mess. Trailing by 14 with three quarters to go is no reason to panic and the Ravens completely lost their minds.

As for this week… I don’t think the Titans will have the same luxury they’ve enjoyed the last two weeks, and that luxury is constipated offense. The Patriots struggled to move the ball. The Ravens couldn’t find the end zone. Kansas City can do both.

Derrick Henry is the obvious weapon of choice for the Titans. Running the ball, chewing clock and scoring points is the perfect recipe for derailing an explosive offense. That strategy requires two things, though.

First, your offense must score points. The Titans have 6 scoring drives of their 19 postseason possessions (not including end of half possessions). Furthermore, against Baltimore, only one of Tennessee’s scoring drives was over 45 yards. Their scoring drives of 35 and 20 yards were both off turnovers. The Chiefs were tied as the 3rd best team in the NFL at protecting the football. Turnovers won’t come easy, if at all.

Second, your defense must get stops. The Chiefs scored touchdowns on 7 straight possessions last week. They kicked a field goal on the possession after that. “But the Texans defense stinks.” Yes, you’d be correct. However, against the Titans in Week 10, Kansas City scored points on five straight 2nd half possessions and each drive was at least 50 yards. The Chiefs only lost because they muffed a field goal attempt on the 6th drive and had a field goal blocked on their 7th. Did I mention that was Patrick Mahomes’ first game back after a dislocated kneecap?

I’m not buying any of the noise about how the Chiefs have to stop Derrick Henry to win. He’s rushed for over 180 yards each of the last two weeks and the offense topped out at 28 points (with a lot of help from their defense.) 28 points is a quarter for Mahomes and the Chiefs. What Andy Reid and Kansas City must do is not get impatient on offense. They’ll have fewer possessions, but they can’t panic and get reckless with their opportunities. Scoring early and often is the most effective way to eliminate Henry from the game. The Chiefs offense is what will stop Henry. CHIEFS If I were Charles Barkley; Chiefs -7.5

(2) Packers at (1) 49ers
If Green Bay can’t run the football they’re going to be in a ton of trouble. Last week against Seattle, the Packers struggled to run the football with any consistent success. Aaron Jones averaged only 3.0 yards per carry despite over 20 rushes. Green Bay was only 2-2 this season when Jones averaged 3 yards or less. If Seattle’s pass rush showed any life at all, the Packers may have been in trouble, but without much pressure, the Packers converted nearly 65% of their 3rd downs and Aaron Rodgers was near perfect, especially when the Packers needed a play. I do have some questions, though.

First, if that game went just a few minutes longer it felt like Seattle would’ve won. Why Seattle didn’t unleash Russell Wilson from the jump will never make sense. Green Bay was helpless against him in the 4th quarter.

Second, where was Aaron Jones in the passing game? In the regular seasons he was 2nd on the team in receptions and targets, 3rd in yards, and first in yards after catch. Against Seattle he was only targeted twice. Perhaps that’s by scheme or because Rodgers had endless amounts of time and kept his eyes downfield, but as I said last week, Jones is the Packers best weapon. They can’t beat the 49ers without a monstrous day from him.

The 49ers, meanwhile, were the most dominant team from start to finish last weekend. (The Chiefs took the first quarter off.) They imposed their will on Minnesota on both sides of the ball and were in the fortuitous position of not having to ask their young quarterback to carry a heavy load. If I’m the Packers, I make Jimmy Garoppolo beat me. The Packers defense is carried by their outside rushers; Preston and Za’Darius Smith. If Green Bay can limit San Francisco’s ground attack or somehow build a big lead, they’ll be in great position. Garoppolo, while solid, hasn’t been in this situation. Even last week he got away with a few really bad throws. Though Kyle Shanahan trusts his quarterback, he’d much rather win this game on the ground and with his defense. And there in lies the rub for Green Bay.

The 49ers boast the NFL’s 2nd best rushing attack. They have a trio of backs that could all rush for over 120 yards on any given day. While stopping the run may be the Packers goal, it won’t be easily accomplished, if accomplished at all. The Packers ranked in the bottom third of the league against the run. In their Week 12 slaughter at the hands of the 49ers, the Packers surrendered 5.1 yards per rush. That wasn’t even the worst of it for Green Bay that day. The Green Bay offense couldn’t stay on the field. They went 1/15 on 3rd down and despite winning the time of possession battle by 11 minutes, couldn’t surpass 200 yards of total offense. I could see that changing with an effective ground game, but if Rodgers is asked to drop back and throw 40+ times, things won’t end well for the Packers.

Ultimately, I think the 49ers are just a better team. If, and it’s a very big IF, the Packers can make San Francisco’s offense a one-dimensional passing offense then I think the Packers will win. I’m just not sold they can make that “if” happen. 49ERS If I were Charles Barkley; Packers +7.5