It’s a funny thing when your team is 11-1, owns the best record in the NFL and just pummeled what many believed was one of the NFL’s most physical teams: Complaining is hard.

Do the Eagles have flaws? Sure they do, but even those flaws are more like inconveniences than flaws. Their tight end is injured. They lack depth at defensive back. Is there a power runner on the roster? See? Inconveniences.

The truth is, the Eagles are the most balanced team in the NFL. Two weeks ago their offense ran for over 350 yards. Last week they threw for nearly 400 AND took the 4th quarter off. Defense looks soft, vulnerable against the run. Nope. The Eagles had Derrick Henry and the Titans on lock down. Even the special teams had a positive week and that hasn’t happened in what seems like forever. The Eagles are really, really good, and in some ways, kind of boring.

By my count, there have only been three moments this season when I seriously considered the prospect of the Eagles losing. 1. After Dallas eliminated a 20-3 deficit and scored to make it 17-20 early in the 4th quarter. 2. The Quez Watkins fumble late in the 4th quarter against the Commanders, a drive after Dallas Goedert fumbled. 3. AJ Brown fumbling with 10 minutes to go against the Colts in a game where the offense was high, drunk or both. So three times all season. That’s it. In fact, I think it’s been more intense cheering against the Saints this season. What a treasure it’s been to root for your own team while also rooting for your team to receive a higher pick. It’s the best of both worlds.

In conclusion, the Eagles are awesome, nothing to complain about. Excited for this week and the Giants…

…Actually, hold on. I can’t just ignore it. Someone has to say it. As irrational and negative as it may sound, it must be said: The Jalen Hurts love is too much.

I mean come on, people. Were you watching the same game? The touchdown to DeVonta Smith was wildly underthrown. Instead of waltzing in for a touchdown, Smith had to stop, get hit and then spin into the end zone.

That throw down the right sideline to AJ Brown? Fox’s Greg Olsen called it a perfect pass and so did many people I know. The safety was beat and behind the play. Brown had his man beat by three feet. If that ball is thrown upfield into the end zone it’s an easy catch and score. Hurts threw it over Brown’s outside shoulder and nearly out of bounds. Despite Brown’s best effort, it was incomplete. 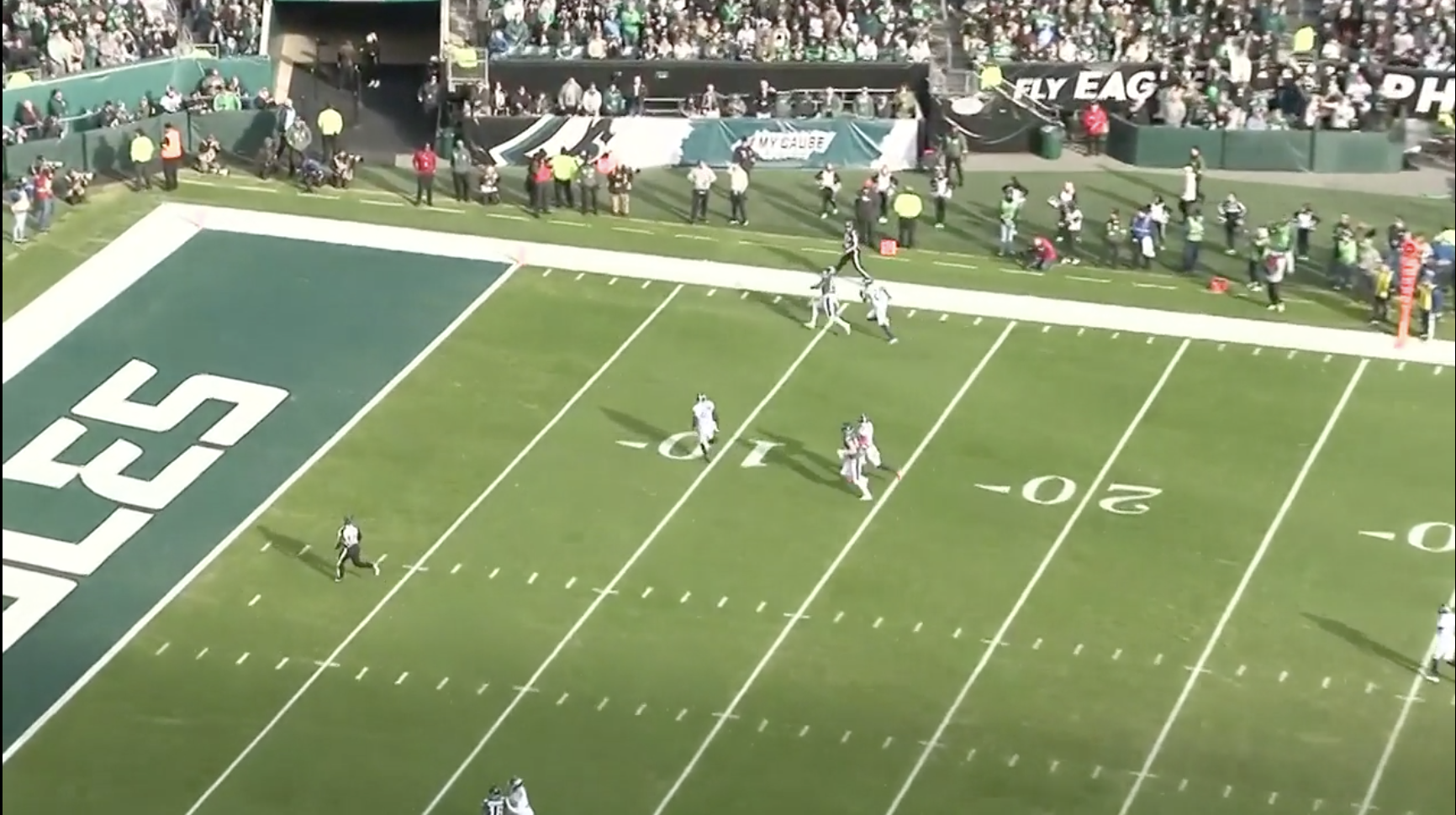 Hurts is good quarterback. He’s far better than I ever expected, but let’s not pretend he throws a ball like Patrick Mahomes or Joe Burrow. Want one more? Sure you do! Negativity is fun!

The throw down the left sideline to Brown that resulted in defensive pass interference was just atrocious. The throw was a full two yards short. It was so bad it drew a pass interference penalty on the poor defender who was playing defense based upon the assumption the quarterback could throw the football in a tight window. Olsen again went on and on praising Hurts for that throw, about how he meant to throw it short to draw the flag. Give me a break. The throw was so short it hit the defender in the leg… off the bounce. Hurts at 12 yards of open space beyond Brown and he missed it badly.

Jalen Hurts is the best quarterback in the NFC this season. He’s amazing. I’m also terrified of reports indicating the Eagles are working out an extension worth between $250 and $300 million. I’d give Mahomes and Josh Allen that money without question. Burrow too. Maybe even Justin Herbert. But those first three win games with their arms. If a quarterback’s best attribute isn’t his ability to throw the football, I’m terrified of committing that kind of money. Maybe Hurts is the first to break the mold, but that’s a hefty bet if you’re wrong.

I’ll say it again, I love Jalen Hurts. I just would like us to stop pretending he’s Dan Marino with Adrian Peterson’s legs until he proves his throwing ability is his greatest attribute. And look at that, I just found a way to complain about a 10-1 football team.

Complaining is my greatest attribute.