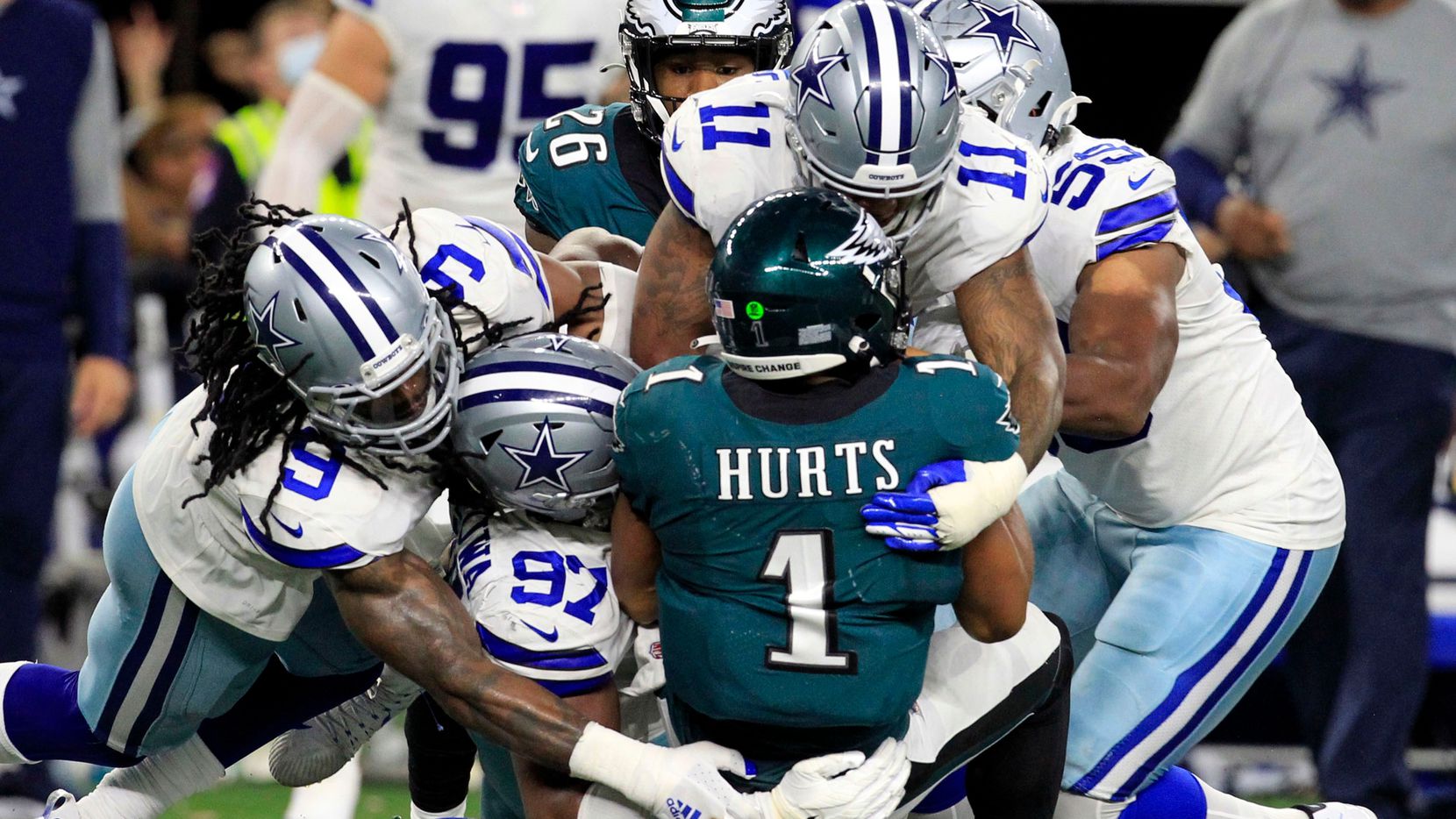 The Eagles were bad. Nick Sirianni’s offense was worse. Jalen Hurts was worst of all. (Photo by John F. Rhodes)

It took 15 days for this thing to go off the rails. 15 days. Jalen Hurts went from franchise savior to playing like, well, you saw the post game press conference. And while we’re on the matter, many should have joined me months ago when I questioned Hurts’ decision making for switching from the number deuce to number one. One isn’t cool. It’s stupid looking. Two is balanced and smooth. Philadelphia needed a two. We just spent the last three seasons watching two 1s (11) struggle to be a franchise quarterback. Hurts played like an eleventh of a franchise quarterback Monday night.

While it would be easy to just roast Hurts, I really can’t because the All-22 film is again unavailable. So while I can’t tell if receivers were open, I can certainly say Hurts has happy feet and sees ghosts in the pocket. Too many times Hurts scrambles himself into pressure. Being an elusive quarterback is a great gift, but only if applied at the appropriate times. To make matters worse, Hurts scrambles heavy to the right. This tendency is clearly on film as defenses shade him to this side. It’s so obvious where Hurts will roll that he was virtually useless when scrambling or rolling out to his right Monday night.

I foolishly believed the real Eagles offense was the Atlanta version. I felt vindicated in the first half against San Francisco a week later and chalked up the scoring struggles to poor design and growing pains. Not anymore. The 49ers adjusted and the Cowboys perfected those adjustments a week later.

This is exactly why Nick Saban moved on from Hurts in the MIDDLE OF THE NATIONAL CHAMPIONSHIP GAME. Think about what a statement that is. Saban knew Hurts wasn’t going to beat a defense with his arm, so he pulled him and inserted an inexperienced freshmen . We’ve seen that more clearly over the last six quarters. Hurts under throws deep balls. He’s late on throws (and behind). He’s afraid to throw over the middle. He very rarely throws to guys that are “NFL open” (three feet of separation). He’s not quick to read a defense. The interception returned for a touchdown was going for six whether DeVonta Smith fell or not.

From the broadcast Monday night you could see guys open within 5-7 yards of the line of scrimmage. Hurts either didn’t see them or wanted more. Just this week Trent Dilfer spoke about how there are scores of ex-NFL quarterbacks who wished they just took what the defense gave them. Dilfer is one of them. He said careers would be different had guys learned that concept while they were in the league. Hurts isn’t Patrick Mahomes. Extending plays isn’t going to lead to highlight reel TDs. Move the ball, live to play another down.

I’m beginning to think Hurts isn’t as confident and comfortable as he wants us to believe. Over the last six quarters of football, Hurts played his best when the pressure was pretty much off. The desperation 4th quarter drive against the 49ers while down 17-3 and then the 3rd quarter drive in Dallas AFTER throwing a pick six to go down 27-7 were unquestionably his best drives. That’s not “rent is due everyday and I don’t plan on missing payments” kind of play. That’s mop-up trash duty. Philly loves a blue collar guy, but we also hate athletes that suck. Sorry.

Now, when you lose by 20 to a division rival the blame isn’t solely on one person or position. It’d be nice if the Eagle defense could tackle. It’d also be nice if the Eagles would invest just a sliver of assets into the linebacker position. Watching Micah Parsons singlehandedly wreak havoc on the Eagle offense was somewhat depressing, especially after DeVonta Smith finished with less than 30 yards for the second consecutive week. And can someone tell me what Miles Sanders did to hurt someone at the Novacare Complex? Did he sleep with someone’s wife? Did he flood a bathroom? Is he mean? Dirty? Does he skip practice? If the answer to those questions is “no,” then why is he only touching the football five times? Why!?! I know I’m a broken record on this, but he is YOUR BEST OFFENSIVE FOOTBALL PLAYER.
Travis Kelce? Gets the football.
Alvin Kamara? Gets the football.
Cooper Kupp? Gets the football.
Derrick Henry? You guessed it, gets the football.
Miles Sanders? Nah, no thanks.
I’m not Jeffrey Lurie, but if I were, I would’ve fired the offensive staff midseason in 2020 after they continually ignored Sanders and I would’ve started chopping heads as the clock ran down in the 4th quarter Monday.

Finally, maybe run the football. Sure, passing is all the rage, but when your QB blows and your offensive line is under siege, maybe try to punish the defense a bit instead of getting bludgeoned like a lifeless piñata.

The season is long and there’s a lot of time to work out the kinks, but Week 4 probably isn’t going to go the Eagles way, and to be quite honest, there are probably only three to four games remaining where the Eagles will be favored. So the improvement has to be quick and dramatic or we’ll see another quarterback on Broad Street next fall. And while bad losses may be easy for Jalen Hurts to ignore and flush, this is Philadelphia. Us Eagles fans can’t just not look and flush it. We live for this. We’re gonna look. We have to see. And we suffer it. Hard. So be better.