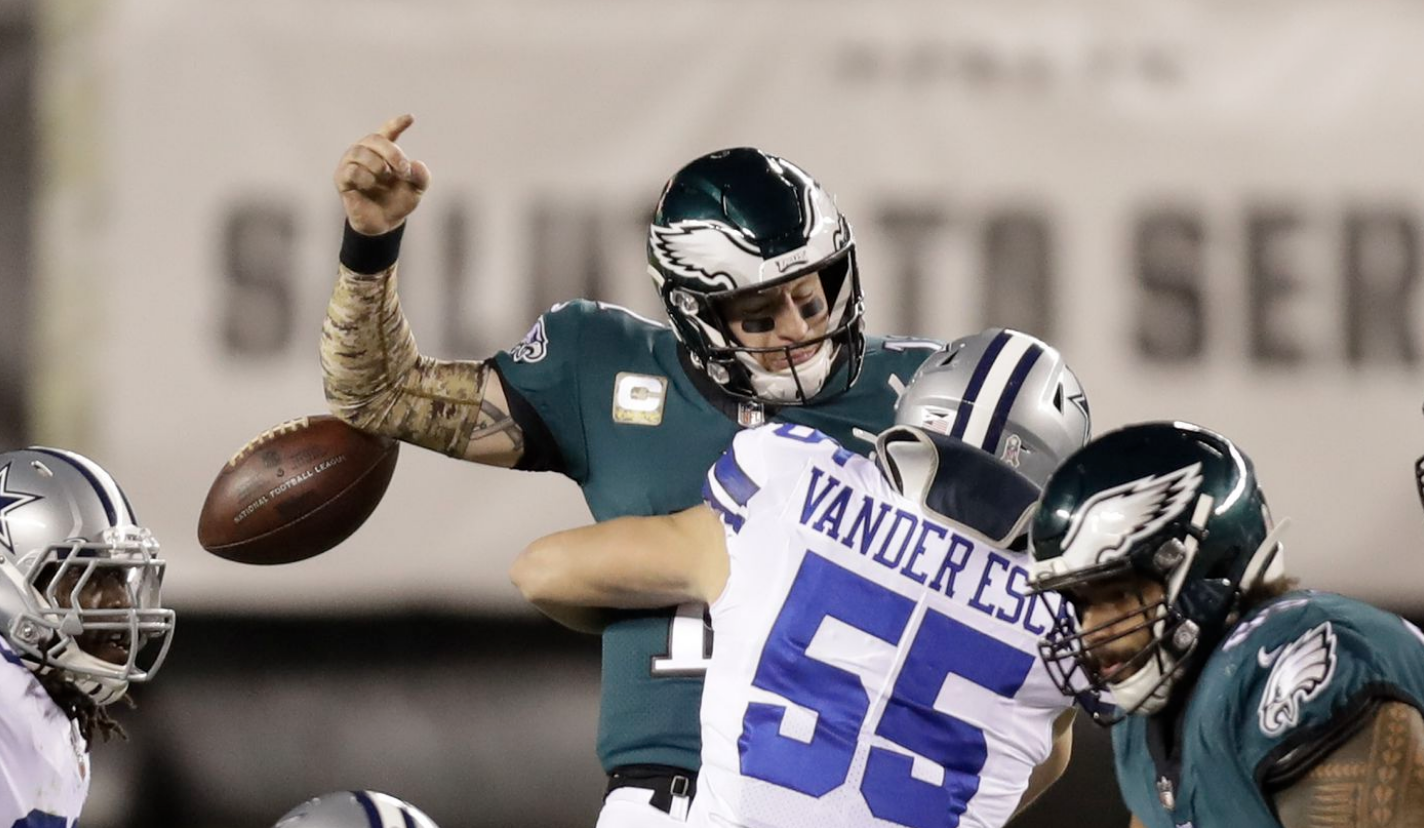 Half of the Eagles season remains and the only question that matters is… What about Carson Wentz? (Photo by YONG KIM/ Inquirer Photographer)

The Eagles are coming off a bye and all things considered, must be pleased with their current situation. No, they haven’t played well at any point this season. No, they do not have a winning record. And no, their remaining schedule is not friendly by any means. However, the Eagles sit atop the NFC East by 2 games (in the loss column) and are set to emerge from the bye as healthy as they’ve been all season.

Again, what about Carson Wentz?

The Wentz hot takes were flying throughout the bye. Brett Favre said the Eagles should’ve held onto Nick Foles and moved Wentz. The Athletic did a deep dive explaining why and where Wentz has rapidly declined since 2017. Others have claimed Wentz’s propensity for turnovers will likely never go away. Some have flat out said Wentz is toast. So what does the future at the quarterback position look like for the Eagles?

It may not be that bad.

I hate to admit this, but I’m now coming around ever so slightly to the Jalen Hurts pick. I hated it at the time and still think it was a bit foolish, but given the way the 2020 season has gone, the Hurts pick gives the Eagles some options.

Let’s say the Eagles, and especially Wentz, maintain this same level of play throughout the 2nd half of the season. I don’t believe they’ll actually go to Hurts for any extended time except for garbage time or a Wentz injury, so that would mean they’re heading into 2021 with an underachieving quarterback on a franchise QB contract and an unknown 2nd year commodity. While that doesn’t sound great, there is a bright side.

Wentz will still have value in the league. He’s mobile with a big arm. There will be a few teams looking to upgrade at quarterback and won’t have the luxury of a top 10 pick. The Colts and Bears are great examples. Would Frank Reich offer a 2nd and 4th for Wentz? Maybe even a 2nd and 3rd or a pair of 2nd round picks? Maybe the Steelers would sniff around considering Ben Roethlisberger’s age and injuries. The Patriots need quarterback help. Bruce Arians and Sean Payton have worked wonders with quarterbacks and both need a younger arm.

I’m convinced Wentz needs a new voice and the Eagles aren’t going to move on from Doug Pederson, so a move could even resurrect Wentz’s career. For the Eagles, getting assets back and starting over with Hurts isn’t as ideal as Wentz being the franchise cornerstone they hoped he’d be, but it’s not a disaster either.

Though the Eagles are favored to win the division and thus reach the playoffs, it’d be a miracle if they all of sudden became a threat to win the conference. These last eight games should be committed to developing the younger talent where it makes sense and most importantly, determining if Wentz’s first 8 weeks were a fluke or a concerning career turn. If he turns it around, then that’s wonderful. The Eagles have their franchise QB and an intriguing set of young receivers for him to grow with. If his struggles continue, the Eagles can pivot to Hurts and start fresh with some additional draft picks to boot.

The future isn’t exactly bright, but it’s not doom and gloom. The Eagles have options, and more importantly for their fans; hope.