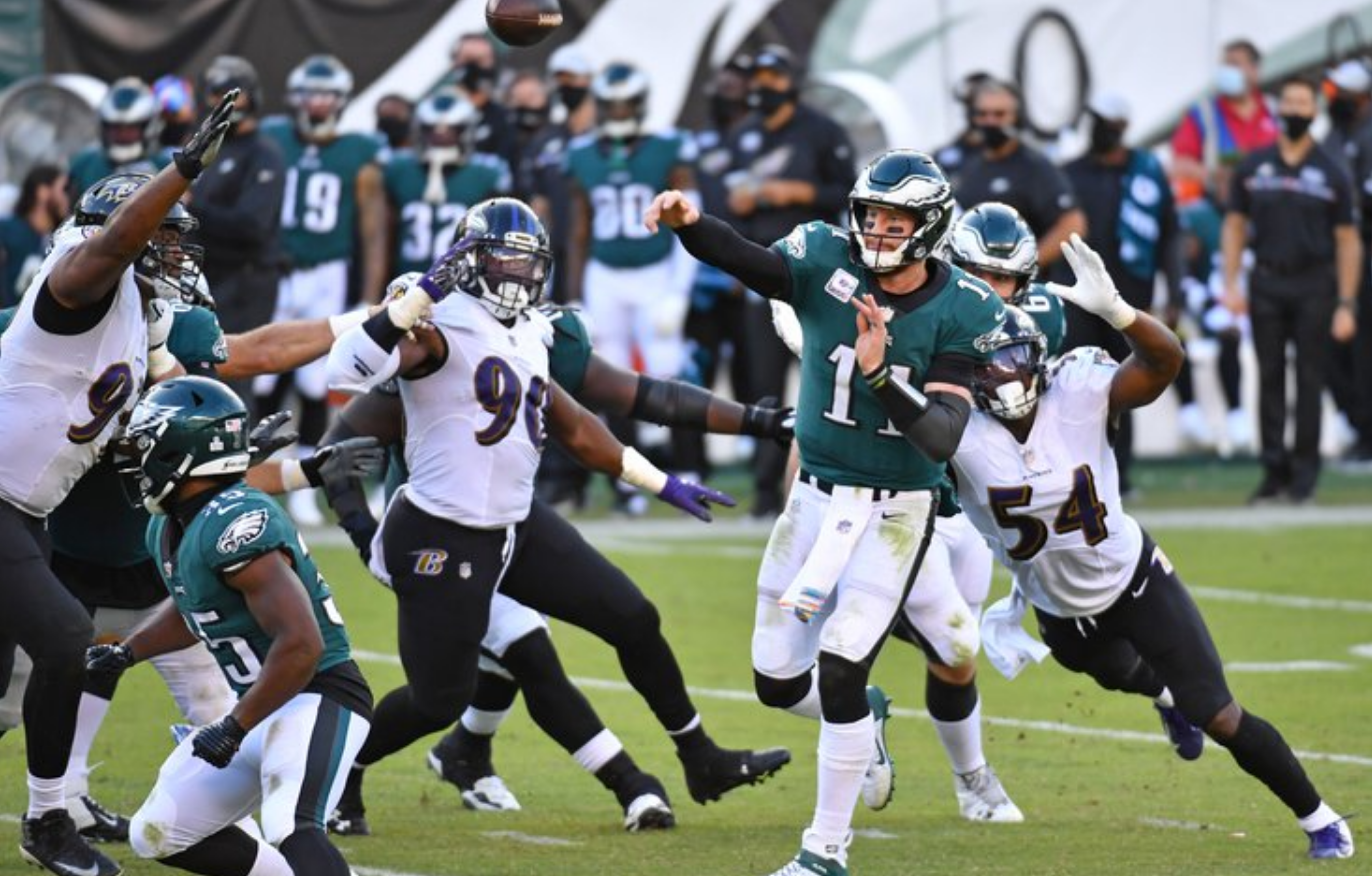 After a three week struggle, Carson Wentz is back to doing Carson Wentz things. (Photo by Eric Hartline/USA TODAY Sports)

Through three weeks of the 2020 NFL season, a lot of Eagles fans were united in their disdain for one man. No, it was not President Donald Trump. It was not even Presidential Candidate Joe Biden. It was none other than Carson Wentz.

Wentz was not an innocent victim. He threw ugly interceptions. He held onto the football too long, taking unnecessary sacks. He missed open receivers. He looked lost. While there were some explanations for his play, no one cared to hear them. Wentz wasn’t good enough. That’s all that mattered.

Over the past three weeks, Wentz and the Eagles have faced three top ten defenses. The last two weeks were against top five defenses. They were all Wentz’s best outings, each improving upon the last. Do we dare ask; is Wentz back?

Here’s what we know for sure: Wentz is the Eagles only hope. The rest of the offense can’t stay healthy. While the defense may flash competence here and there, it’s a flawed unit, incapable of winning a game on its own. It’s all up to Wentz turning lemons into lemonade. And there is no shortage of lemons.

Drops have plagued the Eagles in big ways again this season. While it’s hard to argue one single play would change the outcome of a game, the Eagles managed to drop one touchdown and perhaps another in Week 6. That was after dropping a touchdown in Week 5 in Pittsburgh as well. Quarterbacks can only throw the football. They can’t catch it as well.

The John Hightower 1st quarter drop was as egregious a drop as you’ll see in the NFL, but it may not have even been the worst part of that play. Why was Hightower falling over in his attempt to make the catch? He was literally running straight down the sideline. If he leans over and grabs the football in stride, he scores easily. Instead, he’s falling over (despite no contact) and drops the football. This only happens to Eagle receivers. Even running in a straight line is a challenge right now.

While I understand the frustration fans have for Wentz at times, I don’t at all get the hatred. Wentz cares. Good Lord does he care. What other franchise quarterback do you see blocking 15 yards downfield for the guy coming for his job? I don’t see other NFL QBs jawing at defensive backs while driving them away from the ball carrier. How about the massive 40-yard scramble? Wentz could’ve bailed on that run many times after getting the 1st down. Instead, he lowered his shoulders and kept trucking Baltimore defenders. We’re Philadelphians. We don’t like nice things. We love grit. Wentz is 100% true grit.

Does it get him into trouble at times? Yes. His fumble late in the 1st quarter was a killer and totally unnecessary, but Wentz isn’t a surrender kind of guy, for better or worse. He was one of only two starters left on the offense and he had the Ravens on the ropes. He never complains about the drops. Never makes excuses when his offensive line is a group of strangers duct taped together at the last minute. He’s a backyard baller.

We should stop imposing on him our desire that he be Aaron Rodgers or Russell Wilson and instead embrace Wentz for who he actually is; Brett Favre or Ben Roethlisberger. Wentz is going to miss some easy throws. He’s not going to always see the open target. He’ll have a bad turnover. His completion percentage may not be up to snuff. He’ll also never quit. No game is too far out of reach. The play doesn’t end until he’s rid of the ball or dragged to the ground. Those traits are what made/make Favre and Roethlisberger legends. It’s what made/makes them so hard to beat on Sundays. Wentz is the franchise, and we should be thankful he doesn’t shrink from that challenge even when the list of reasons to do so is long.

⊕ What’s the deal with the slow starts? Slow would probably be an understatement. The Eagles have come out crawling the last two weeks. In Pittsburgh, the Eagles first 8 plays went for a total of -2 yards. If not for a 74-yard TD run by Miles Sanders on 3rd and 9, it would’ve been three straight 3-and-outs. It was far worse against the Ravens. The Eagles didn’t get a 1st down until their 7th drive. 16 plays, -12 yards, 1 fumble lost. Buzz, your girlfiend…

Back to the question… is Doug Pederson scripting the offense to start games? If so, please stop. The offense appears to take off once the rigid structure dissipates. Wentz clearly performs better when the offense is loose and he’s allowed to create plays. Let’s start with that from now on instead of waiting until we’re down by multiple scores.

⊕ I know he left with an injury midway through the 3rd quarter, but Miles Sanders was once again on pace to finish the game with less than 20 touches. The guy has two runs over 70 yards in consecutive weeks. He’s a playmaker. GIVE HIM THE FOOTBALL.

⊕ I hear the clamoring for more Jalen Hurts packages based on the offense’s performance when he’s on the field. I’m all for whatever gives the offense a boost. However, I think a reliable running game would also do wonders for the offense, especially for an offensive line that has been a never-ending game of musical chairs. More Hurts AND more rushes would go a long way to improving the offense.

⊕ Many expect the Eagles to come out against a lowly Giants team and apply their 2nd half efforts from Weeks 5 and 6 and roll to victory. Anyone who has watched this team knows it won’t be that easy. I actually wouldn’t be surprised if the Eagles found a way to lose. Losing Zach Ertz doesn’t look like a huge loss based on his production thus far, but he did attract a fair amount of attention from opposing defenses. With him gone and Dallas Goedert still out, Eagle receivers will be asked to do even more, but now with added attention on them. Ultimately, I think Wentz and the Eagles scrap their way to victory. Though I’m not expecting anything as smooth or exciting as their 2nd half on Sunday. EAGLES If I were Charles Barkley; Eagles -4.5